She may be living in Los Angeles in a stunning $9.5million mansion, but that doesn’t mean she’s forgotten her British roots.

And reminded of her home in a round in her latest interview with Vogue, Adele was seen answering a round of British-themed quickfire questions as she took part in the iconic publication’s 73 Questions series on Thursday.

Not surprisingly, the Royal family came up as Adele was forced to choose between Prince William and Prince Harry. 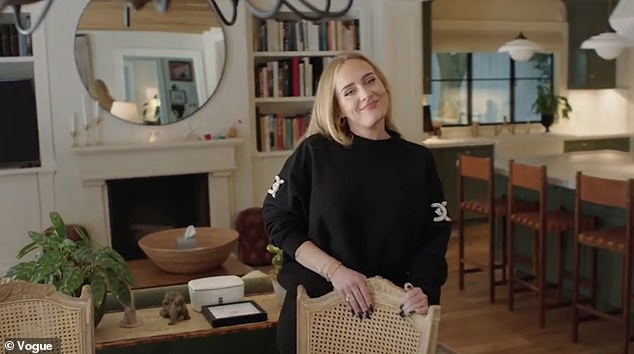 Cheeky: Adele was forced to choose between Prince William and Prince Harry as she took part in a round of British-themed quickfire questions for Vogue on Thursday

In the video shared online, Adele is asked to choose her favourite between the Royals.

She’s seen walking into her house from the garden and turns to the camera with a huge grin on her face, as she answers: ‘Prince… Harry.’

It’s not the first time Adele has spoken of her love for Prince Harry, as she previously joked she would love to go ‘on a night out’ with the Duke of Sussex.

In an interview with Glamour back in 2011, Adele teased she wanted to marry Prince Harry as she confessed to having a crush on him. 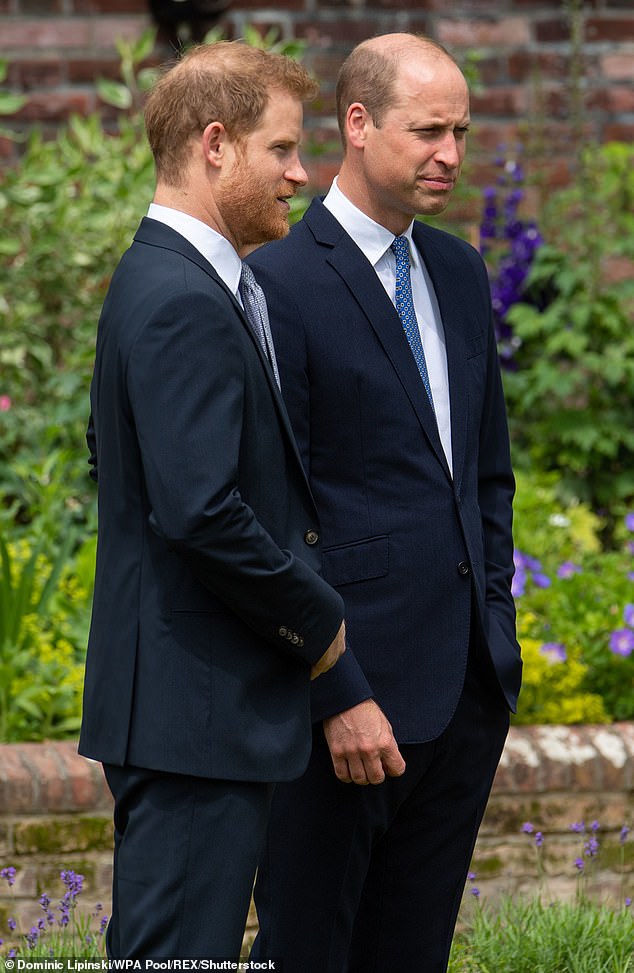 Royal choice: The Grammy Award-winner chose Prince Harry over his brother William, with Adele revealing in a previous interview she had a crush on the Duke of Sussex

She said: ‘I’m after Prince Harry. I know I said I wouldn’t go out with a ginger, but it’s Prince Harry! I’d be a real Duchess then.’

‘I’d love a night out with him, he seems like a right laugh,’ the singer revealed.

Adele, however, added that she’s previously dated fellow celebs and didn’t like it.

She added: ‘I’ve been on a few dates with celebrities but I don’t like it. You go out and everyone looks at you both. I’m not going to say who.

‘We go to really established places that know how to keep their f***ing mouths shut. But then, everyone wants to f*** a celebrity, so I wouldn’t trust them.’

In her recent quickfire question round, Adele also reaffirmed her love for the Spice Girls as she chose them over legendary band The Beatles. 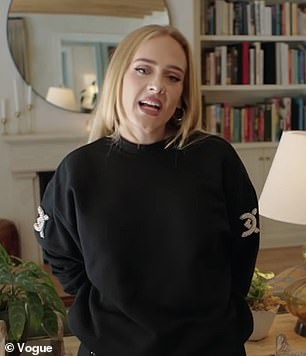 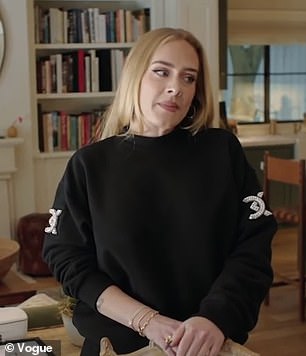 Fun: Adele took part in Vogue’s 73 Questions series from her $9.5million LA home as she opened the doors to fans 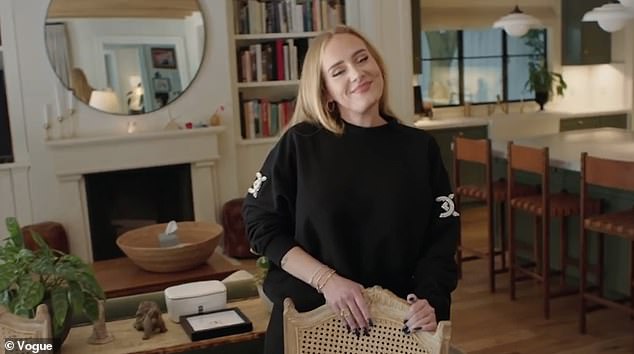 Loyal: Adele was also seen reaffirming her love for the Spice Girls, as she picked the iconic girlband over legendary band The Beatles 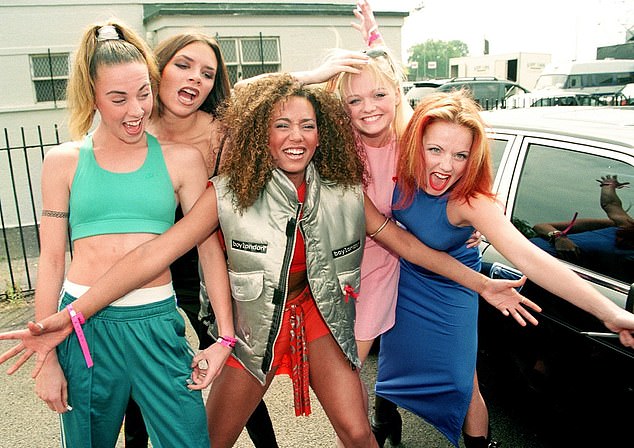 Big fan: Adele said the thing she loves most about the Spice Girls is their ‘brashness’

Forced to pick between the iconic girlband and The Beatles, Adele replied: ‘I mean, that’s a bit unfair but I’m going to go Spice Girls.’

A big fan of the Spice Girls – made up of Emma Bunton, Mel B, Mel C, Geri Horner and Victoria Beckham – Adele revealed what she loves most about the band.

Adele also picked Blur over Oasis and Liam Gallagher over his brother Noel, telling the camera: ‘Definitely Liam, without a doubt.’

She also revealed her most prized possession was a piece of Celine Dion’s gum that James Corden had saved and then framed for her. 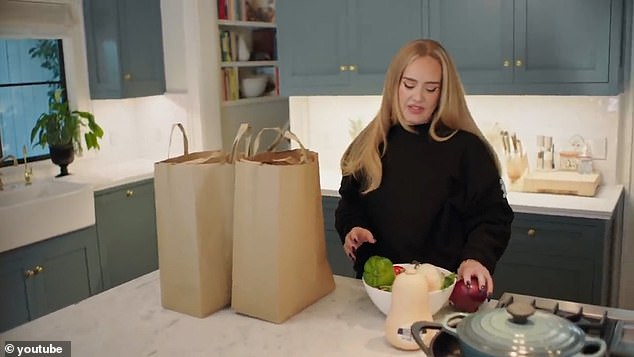 Perfect pad: The singer gave fans a glimpse inside her impeccably styled home, as she unpacked her grocery shopping in her kitchen 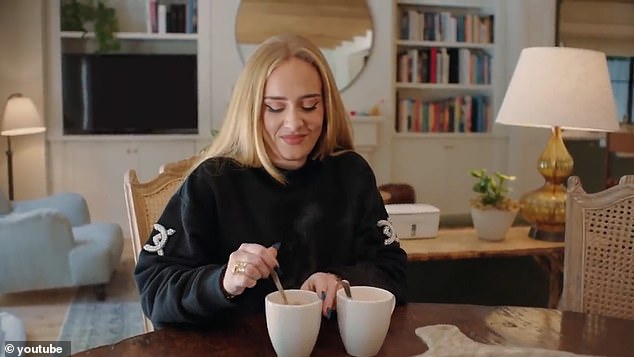 Chic: The open-plan kitchen leads into a living/dining room space where Adele was seen enjoying a cup of tea at the table

The 18-minute long video saw Adele open the doors to her impeccably styled LA home, that boasts a ‘very English’ garden and an open plan kitchen.

At the beginning of the video, Adele was seen unloading paper shopping bags from her luxury car, with the star’s grand doorway visible in the background, before heading into the kitchen to put her healthy food shop away.

Home to a huge island and teal units, the kitchen then opens out to a modern living room space, that centres around a huge fireplace and bookshelf, with Adele sitting at the dining table to enjoy a cup of tea during the chat. 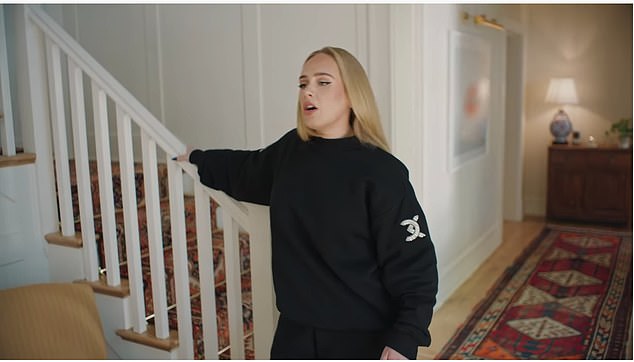 Grand: The Rolling In The Deep hit-maker’s home was perfectly styled inside 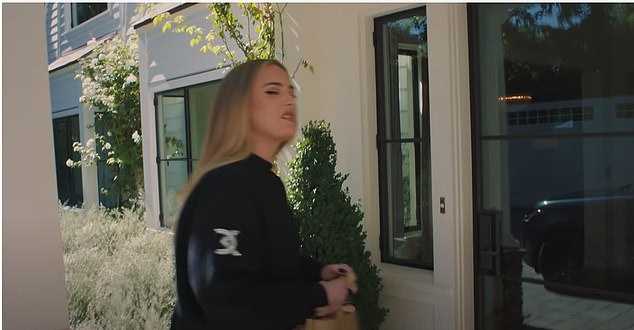 Gorgeous: It also boasts a ‘very English’ garden outside that comes with a huge play area for Adele’s eight-year-old son Angelo

It came as part of Adele’s latest cover shoots with US Vogue and British Vogue ahead of the release of her new single Easy On Me last week – her first musical release in five years.

It’s the first track taken from her upcoming album, 30, set for release in November, with the record reflecting on Adele’s divorce from ex-husband Simon Konecki, who she shares son Angelo, eight, with.

Opening up about the split in her interview with British Vogue, Adele said: ‘When I was 30, my entire life fell apart and I had no warning of it. It just wasn’t… It just wasn’t right for me any more.

‘I didn’t want to end up like a lot of other people I knew. I wasn’t miserable miserable, but I would have been miserable had I not put myself first. But, yeah, nothing bad happened or anything like that.’ 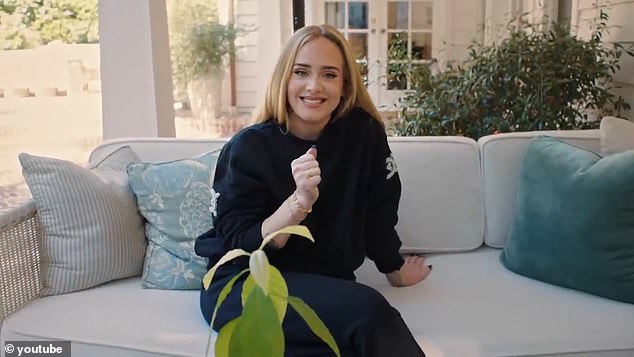 Right at home: Adele looked the picture of happiness as she gave fans the grand tour