Adele Roberts has revealed her chemotherapy treatment left her with ‘burned’ skin on her face and acne as she shared fresh-faced snaps to Instagram.

The BBC Radio One presenter, 43, admitted she had previously felt too ‘ashamed’ to show pictures of her facial acne on social media as she penned a candid statement on Friday.

Adele announced her bowel cancer diagnosis in October and has since been open with sharing her journey on social media. 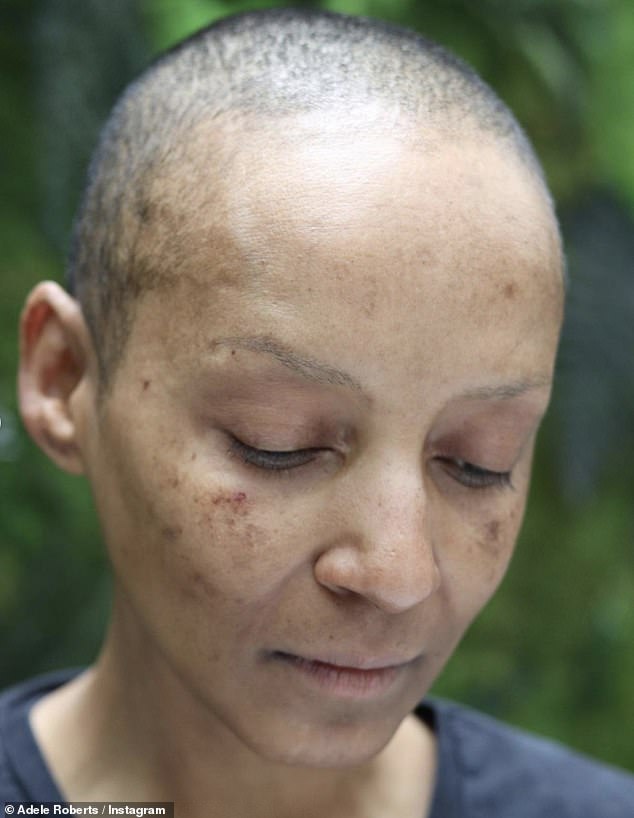 Candid: Adele Roberts has revealed her chemotherapy treatment left her with ‘burned’ skin on her face and acne as she shared fresh-faced snaps to Instagram

In her latest post, she said her girlfriend Kate Holderness has helped her ‘cover’ her ‘scars’ with make-up but said she decided to share her skin journey to help others going through the same thing.

Kate, who has recently opened up about suffering with foot and hand syndrome due to her chemotherapy, shared snaps showing her acne scars alongside a lengthy caption.

She admitted she has always felt ’embarrassed’ about her skin having suffered with acne throughout her life, as she admitted the chemotherapy has ‘ravaged’ her skin.

She wrote: ‘I’ve always been embarrassed about my skin. I’ve struggled with it for most of my life. I’ll never forget when it first started to breakout and a lady asking me if I’d been in an accident. 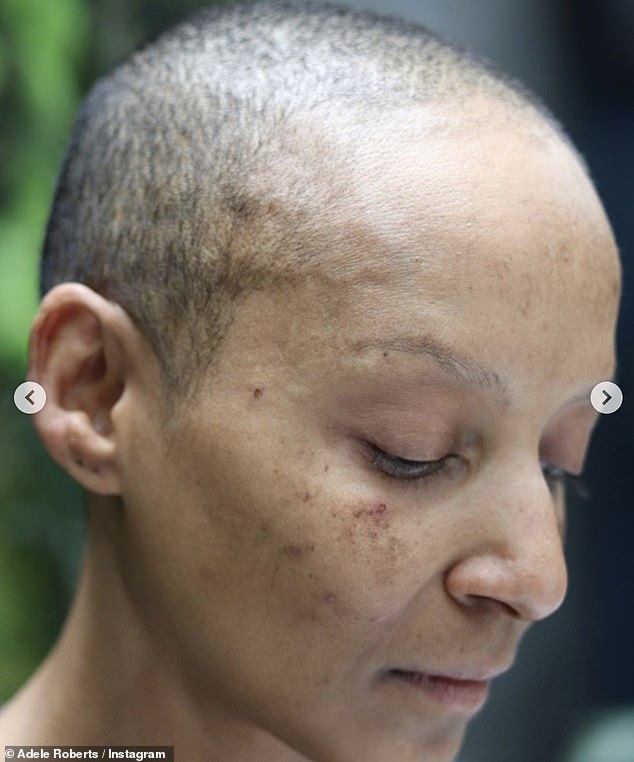 ‘I was mortified’: The BBC Radio One presenter, 43, admitted she felt too ‘ashamed’ to show pictures of her facial acne on social media as she penned a candid statement on Friday

‘I was mortified… I think I’ve carried that shame with me for too long. Everything I’m going through at the moment has taught me it’s good to share. I’m not the only one.

‘I’m very lucky to be on this treatment but it’s ravaged my skin a lot. I’ve shared what it’s done to my hands and feet but I was too ashamed to show you my face.

‘I’ve been thinking a lot recently and I’ve realised that it’s good to share as much as I can. What if someone else is suffering too and they think they’re alone. You’re not.

‘Kate’s helped me so much and has helped me cover my scars with makeup. We use a foundation by Kat Von D which has been formulated to cover up face tattoos.

‘This is the first step to my liberation I guess. I hope you don’t mind me sharing but I hope it helps at least one person.’ 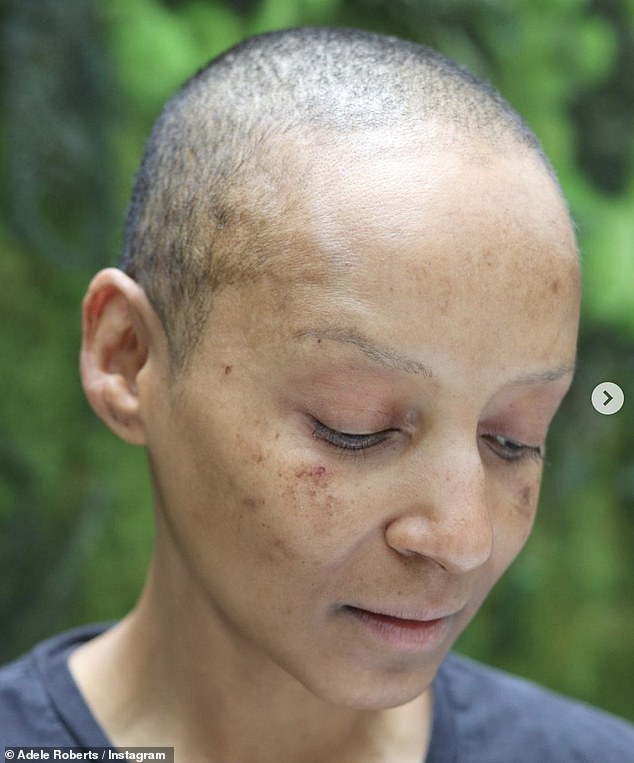 Sharing: Kate, who has recently opened up about suffering with foot and hand syndrome due to her chemotherapy, shared snaps showing her acne scars alongside a lengthy caption 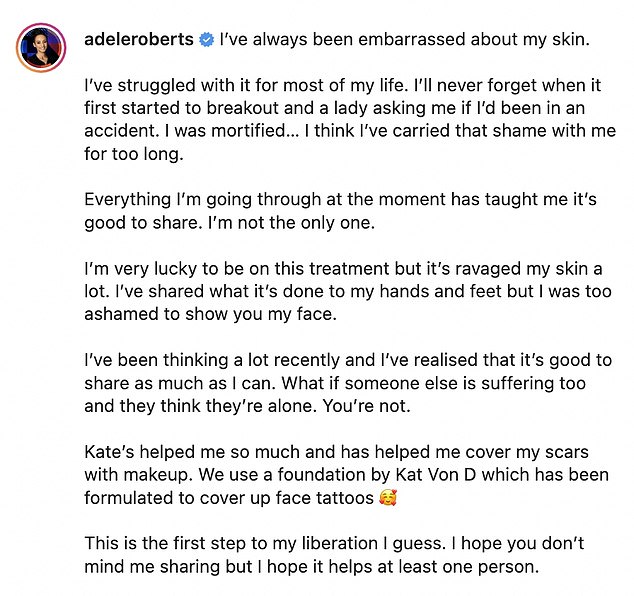 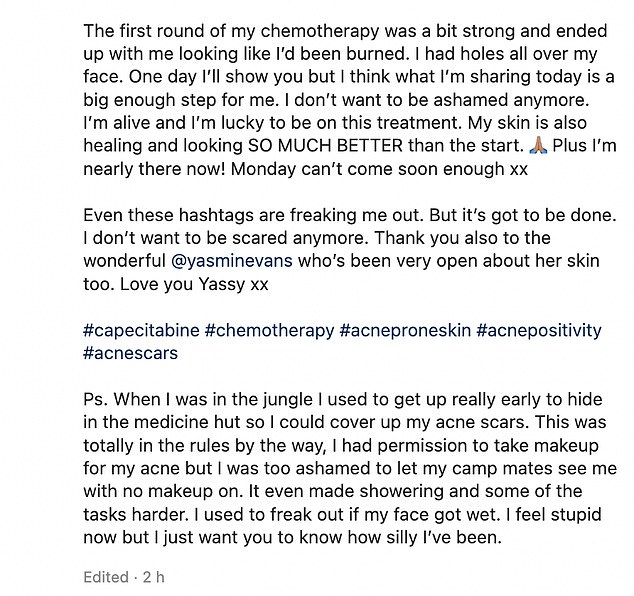 Acne: She admitted she has always felt ’embarrassed’ about her skin having suffered with acne throughout her life, as she admitted the chemotherapy has ‘ravaged’ her skin

Adele went on to explain that her first round of chemotherapy left her skin looking ‘burned’ and said she had ‘holes’ on her face.

Some cancer treatments may affect your skin and nails. Their condition and appearance may change, depending on the drug or treatment you are having. Tell your doctor or nurse about any skin changes.

Your cancer team may give you advice on looking after your skin. They may tell you if there are products you should use or avoid. It is very important to follow their advice.

Some chemotherapy drugs make your skin dry and more sensitive to sunlight.

Certain drugs may make the palms of your hands or the soles of your feet red and sore (palmar-plantar syndrome). Your specialist can give you advice and may reduce the dose of the drug.

Radiotherapy can affect the skin colour in the treated area or cause broken veins to appear later. Your skin may become red, sore or itchy. If you have dark skin, it may become darker.

The person giving you your radiotherapy will tell you how to care for your skin during and after your treatment. It is important to follow their advice.

Hormonal therapy drugs can affect your skin, nails and hair. But the effects are usually mild. Hormonal therapies may cause dry skin and rashes. Rarely, they may also cause spots.

Some people have medicines called steroids as part of their treatment. Steroids can make your skin more likely to get spots and redden.

Chemotherapy, targeted and immunotherapies, hormonal therapies or steroids can cause rashes, dry skin or spots that look like acne. If you are having immunotherapy treatment and you get a rash, tell your doctor straight away.

Targeted therapies and immunotherapies can also make your skin itchy and more sensitive.

She admitted she felt ‘freaked out’ about finally sharing her skin journey, but added that she didn’t want to feel ‘ashamed’ about it anymore.

She continued: ‘The first round of my chemotherapy was a bit strong and ended up with me looking like I’d been burned. I had holes all over my face. One day I’ll show you but I think what I’m sharing today is a big enough step for me.

‘I don’t want to be ashamed anymore. I’m alive and I’m lucky to be on this treatment. My skin is also healing and looking SO MUCH BETTER than the start. Plus I’m nearly there now! Monday can’t come soon enough xx

‘Even these hashtags are freaking me out. But it’s got to be done. I don’t want to be scared anymore. Thank you also to the wonderful @yasminevans who’s been very open about her skin too. Love you Yassy xx

‘Ps. When I was in the jungle I used to get up really early to hide in the medicine hut so I could cover up my acne scars.

‘This was totally in the rules by the way, I had permission to take makeup for my acne but I was too ashamed to let my camp mates see me with no makeup on.

‘It even made showering and some of the tasks harder. I used to freak out if my face got wet. I feel stupid now but I just want you to know how silly I’ve been.’

She recently posted several snaps of her medication and her sore hands as she battles ‘foot and hand syndrome’.

Hand-foot syndrome is a side effect of some chemotherapy drugs that can cause redness, swelling and blistering on the palms of the hands and soles of the feet.

Appearing on Lorraine earlier this month, Adele revealed she is set to finish her final cycle of chemotherapy soon.

‘I’m so excited to finish, not long to go now. I started my final cycle on Tuesday. It is starting to stack up.

‘My body’s feeling it now, but my spirit is still feeling really good and it’s thanks to campaigns like yours that I’m getting out of bed every day and just living my best life,’ she said.

Earlier, she had broke down in tears as she watched a video of the late Tom Parker amid her own battle with bowel cancer.

The respected radio DJ, 43, revealed she was starting her final round of chemotherapy in an emotional Instagram video.

She cried as she told her fans how The Wanted singer has inspired her to keep fighting, following his death from brain cancer aged 33 in March. 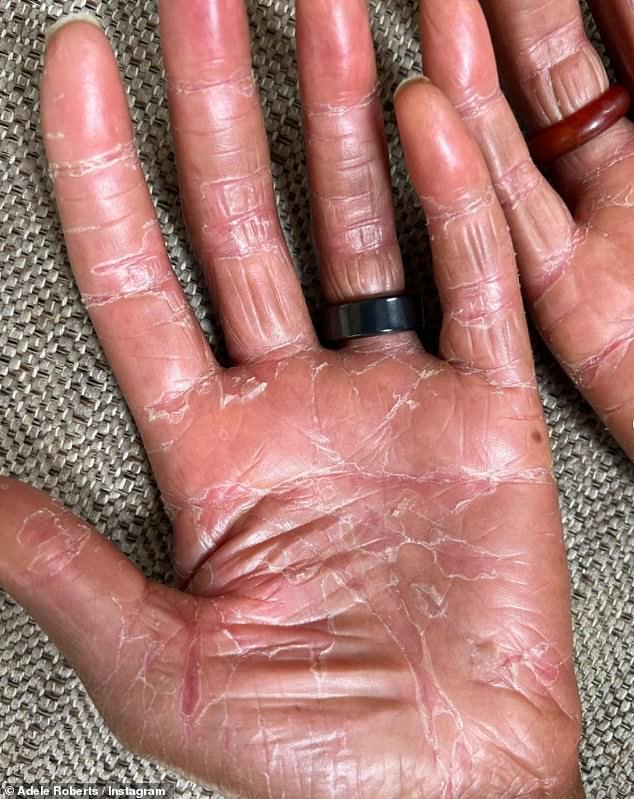 So painful: Adele recently posted several snaps of her medication and her sore hands as she battles ‘foot and hand syndrome’

The former I’m A Celebrity campmate told her fans: ‘So just been to the gym this morning to prepare my body for the…’

Choking up, she continued: ‘Sorry, my final round of chemotherapy. I’m just upset cos I’ve been watching a video about Tom Parker from The Wanted.

‘I’m just really sad for him that he’s passed away but I was just saying on my Facebook page that I wish I could have met him in real life.

‘Just to thank him for the strength that he’s given me and also all the wonderful people on Instagram who have been good to me and, of course, you Katie.’ 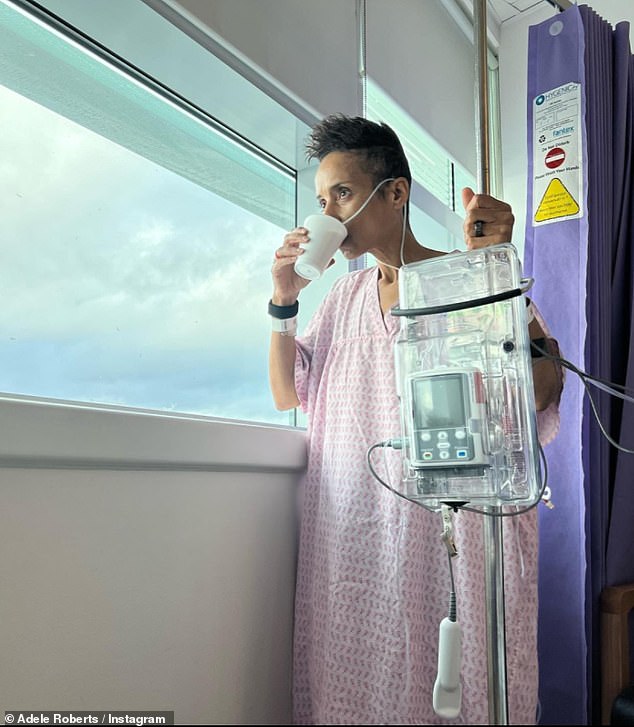 Illness: Adele announced her bowel cancer diagnosis in October and has since been open with sharing her journey on social media

Adele was referring to her girlfriend Kate Holderness, who she is currently in a long-term relationship with, however it is not known how long for.

‘Anyway, hopefully going to pick up my last round of chemotherapy from the hospital today. And what I try and do each day is get out of bed, look after my body.

‘It’s really suffering now and feeling the effects of chemotherapy so I’ve been to the gym done a stepping session and I’m gonna walk to the hospital now pick up my final round.

‘Hopefully in two weeks time I’ll be ringing that bell to say that I’ve finished chemotherapy, I’ll have a scan after that and them hopefully I’ll be cancer free. Fingers crossed.’ 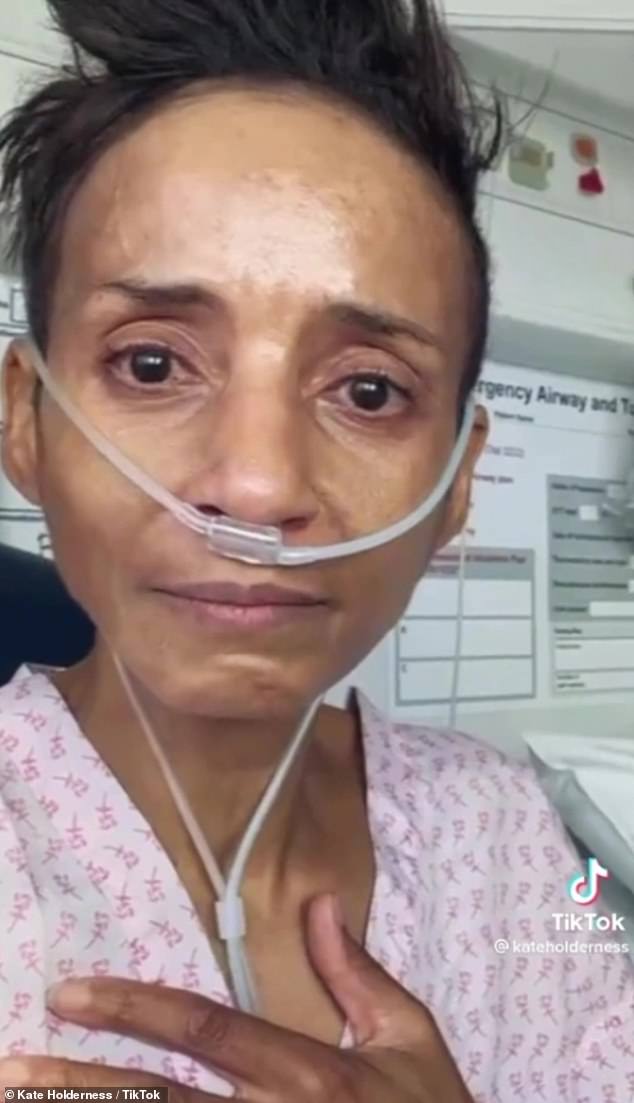 Heartbreaking: It comes after last month Adele fans’ were left heartbroken after her girlfriend Kate shared a video of the star in hospital as she fought bowel cancer

Last month, Adele’s fans’ were left heartbroken after her girlfriend Kate shared a video of the star in hospital as she fought bowel cancer.

Adele has been candid about her health battle, with Kate taking to TikTok to share a montage of clips of Adele going through chemotherapy, which she started last October.

In one clip, Adele’s eyes were filled with tears as she spoke to Kate from her hospital bed, with Lady Gaga and Bradley Cooper’s Shallow playing over the video.

The video also showed Adele being helped up a flight of stairs by a nurse and another shot of her asleep on the couch. 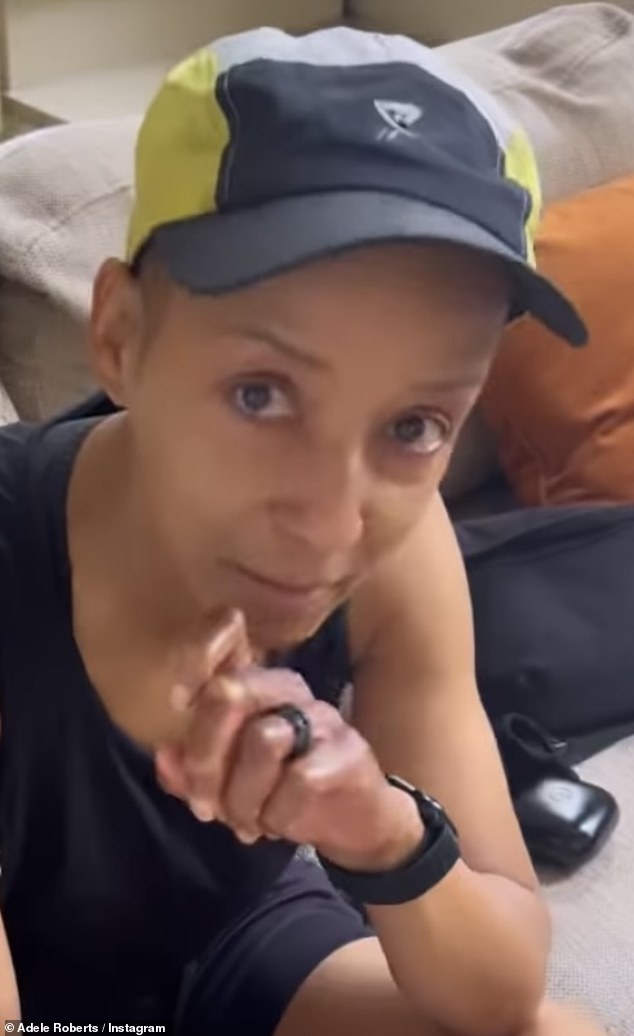 Candid: Elsewhere, she recently choked up with tears as she told her fans how the late Tom Parker has inspired her to keep fighting, following his death from brain cancer aged 33

While it also saw her taking medication and showed how the treatment had affected the skin on her feet and hands.

Alongside the clip, Kate wrote: ‘FOR ADELE ♥️ @adeleroberts I don’t think you know how astonishing you are. I hope this video helps you see…just a little.’

Replying to the post, Adele addressed her partner in the comments, writing: ‘I cannot thank you enough for how much you’ve helped me. I can’t stop crying at this.

‘Thank you for always being there for me. I can’t see for tears. We’re nearly there my love and I promise nothing will ever take me away from you. And when this is all over I will spend the rest of my life trying to repay what you’ve done for me. I love you more than you can imagine.’

THE SYMPTOMS OF BOWEL CANCER, WHICH DEVELOPS FROM POLYPS IN THE COLON AND RECTUM

Bowel, or colorectal, cancer affects the large bowel, which is made up of the colon and rectum.

Most cases have no clear cause, however, people are more at risk if they:

More than nine out of 10 people with stage one bowel cancer survive five years or more after their diagnosis.

This drops significantly if it is diagnosed in later stages.

According to Bowel Cancer UK figures, more than 41,200 people are diagnosed with bowel cancer every year in the UK.

It affects around 40 per 100,000 adults per year in the US, according to the National Cancer Institute.