An extremely thin strip of land stretches into southern Senegal for about 500km. It’s officially called the Republic of The Gambia and might even escape sight on the map of the African continent at first. It will no longer be like this.

On Wednesday, the Scorpions gained their first win in their first ever match at the Africa Cup of Nations, beating Mauritania 1-0. ‘It’s amazing that we are even here,’ their Belgian coach Tom Saintfiet had told Sportsmail just before the game.

‘The Gambia is the smallest African country on the mainland. When I arrived, in 2018, they had had only one competitive match in the previous five years against Tanzania in September 2013 [for the 2014 World Cup qualification phase].’ 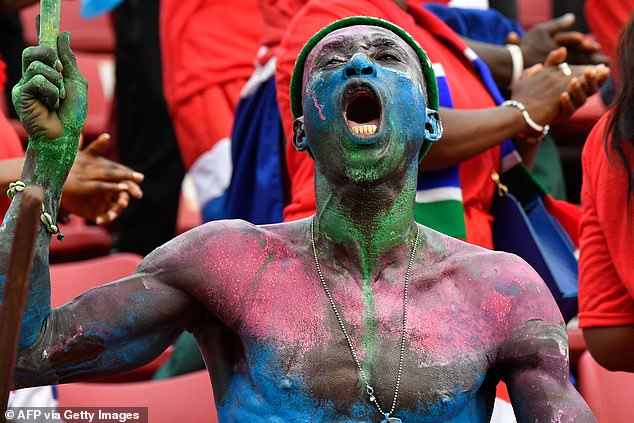 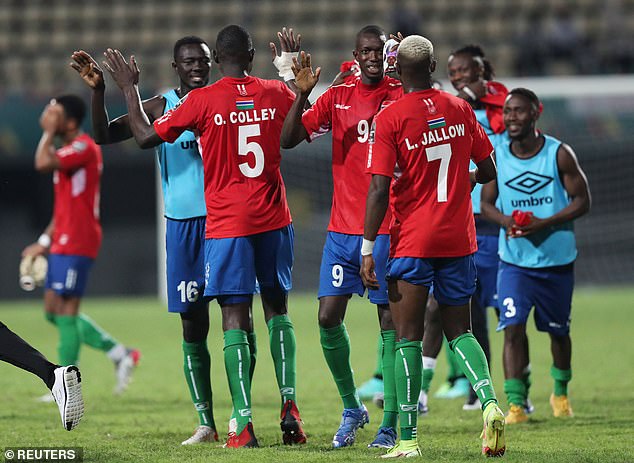 The main reason was the ban that CAF imposed on their federation for using five overaged players in the 2014 U20 Africa Cup of Nations. That cheat plunged the Gambian national team into oblivion.

In July 2018, at the time of Saintfiet’s appointment, they ranked 172nd in the FIFA rankings. On the eve of the 2021 AFCON, they had risen to 150th. Despite being the lowest FIFA-ranked team that has ever qualified for AFCON, it represents an improvement, with the future looking even brighter.

In particular, this was made possible thanks to the emergence of numerous talents who in previous years had left the country for Europe, a much-desired destination. Some even risked their lives going through the so-called ‘backway’, whose final stage is the crossing of the Mediterranean Sea.

Italy, which is one of the first European landing countries on that migration route, is where most Gambians play professionally. In 2016, the Italian Ministry of Internal Affairs registered around 25,000 unaccompanied minors, 13% of whom were Gambians. 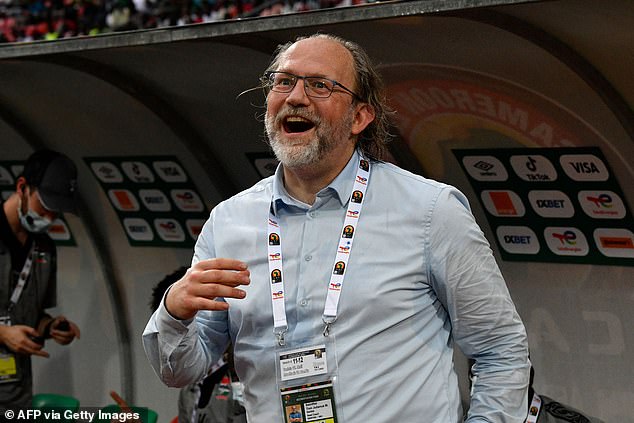 A £2,109 per capita income, which relegates the Gambia to 159th place in the annual ranking of the International Monetary Fund and, until 2017, the Yahya Jammeh regime’s oppression, were among the main reasons behind the desire to leave the country.

The third reason is football, which is always part of the dream in The Gambia. But considering the amount of talent, why are there so many that only appeared recently? Gambian talents were not hiding.

In truth, the way Italian football is organised and the laws for immigrants are not favourable at all. Before joining their first clubs in Italy, AS Roma’s Ebrima Darboe and FC Crotone’s Musa Juwara had to fight against Italian and international sports regulations that limit the entry and registration of underage players.

A few years ago, another footballer, Bakary Jaiteh, missed the opportunity to join AS Roma because he was unable to obtain the necessary documentation. In fact, Article 19 of the FIFA regulations on the status and transfer of players prohibits the transfer of underage players out of their country. 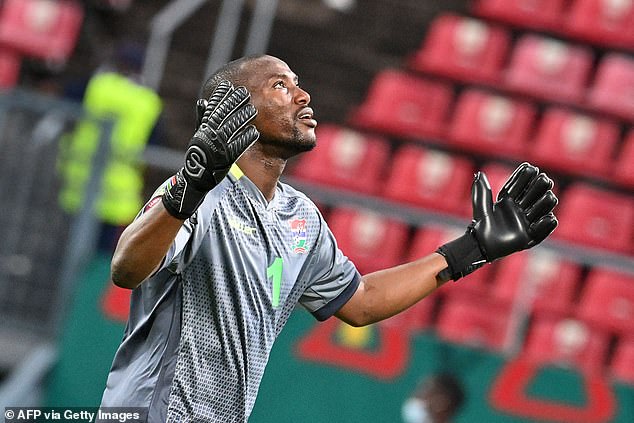 Goalkeeper Modou Jobe, who plays his club football in South Africa, during the match 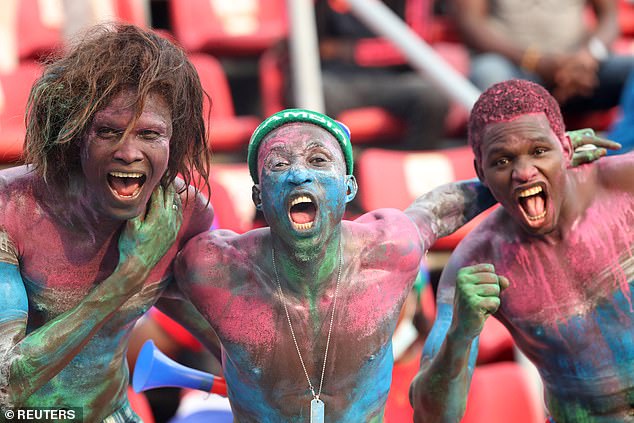 Consequently, the cases of Juwara, Darboe and other Gambian minors represent true exceptions. In addition, the lack of infrastructure and professionalism in the Gambian league doesn’t allow the players to dream of following in the footsteps of Biri Biri, the former Sevilla legend and the best Gambian player ever.

‘The reason why I wanted to coach The Gambia is because I knew there was a lot of young talent,’ said Saintfiet. Gambian football firstly came out from its condition of anonymity into which it had fallen on July 5, 2020.

On that day two Bologna FC players of Gambian origin, Musa Juwara and Musa Barrow, increased their country’s popularity by knocking out Inter Milan at San Siro with one goal each.

Then, they proved that coach Saintfiet was on the right track by equalising twice against the future continental champions, Algeria, during the 2019 AFCON qualification campaign.

The first, historic qualification to AFCON achieved in 2021 sealed their growth, and allowed them to leave the group of 10 national teams who have never qualified for the top continental tournament. 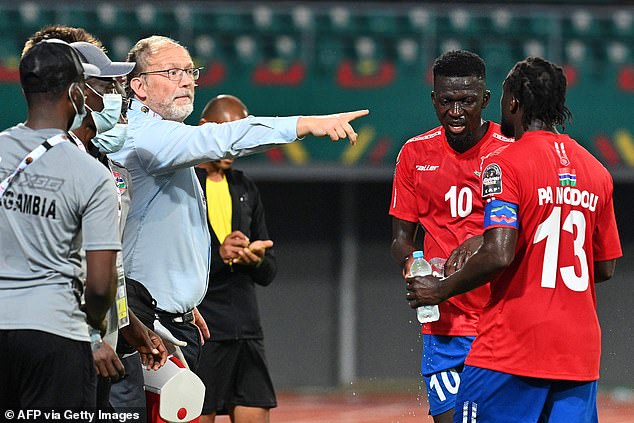 Saintfiet gives his players instructions during the match, which Gambia went on to win 1-0 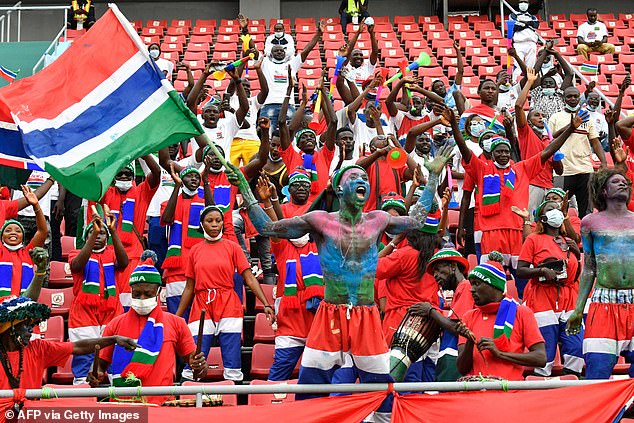 It has been an incredible journey for The Gambia, culminating in their first AFCON appearance

‘No one expected us to qualify from that group and for sure not to win it,’ continued the Belgian coach, who has more than 10 years of experience in the African continent.

During the qualification campaign, they obtained their first away win in competitive football against Angola. ‘When we qualified, the stadium was empty because of the Covid-19 restrictions, but outside there were thousands of fans celebrating in the streets. In The Gambia everyone loves football, everyone plays football.’

According to Saintfiet, at the moment The Gambia can count on more than 130 Europe-based footballers – a huge achievement for a country that boasts a population of only around two million people. ‘Not all of them play in big teams of course, but this means a lot for us.’

Many of them have been trying their luck in Italian amateur clubs and professional clubs’ academies for a long time and this has recently started paying off. In 2020, five out of nine Gambian professional footballers playing in Italy had come across the sea. 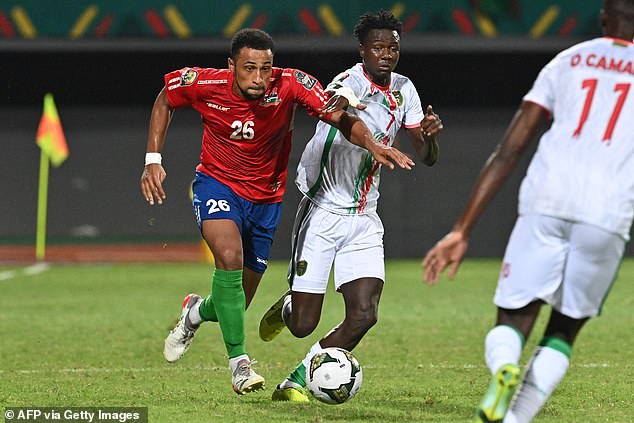 The Gambia’s final list included two of those players who arrived in Europe as refugees – AS Roma’s midfielder Darboe and Verona’s goalkeeper Sheikh Sibi.

There are also English-born players in Saintfiet’s squad. Forest Green Rovers midfielder Ebrima ‘Ebou’ Adams, who went from being a part-time footballer working at TGI Fridays to taking part in his debut for his parents’ country.

Salford City’s Ibou Touray was in the line-up as well. He spoke to Sportsmail after training this week, highlighting the importance that the AFCON has for him.

‘My dad left The Gambia at 15, travelled around Africa, then went to Italy where he met my mother,’ he recalled. ‘Finally, they moved to the UK where I was born. So AFCON is definitely a big deal for me. I’m happy to represent my dad’s family and make them proud.’ 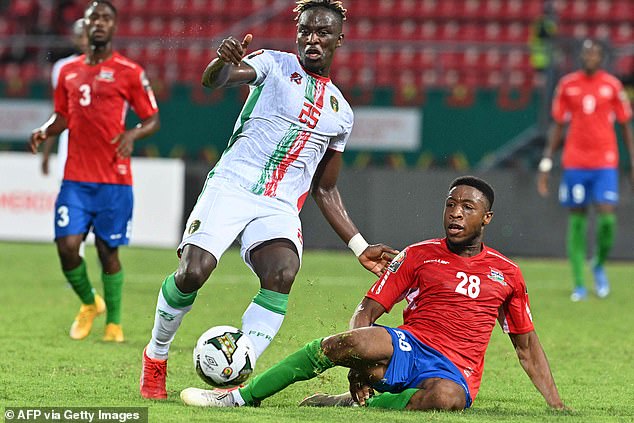 Playing for The Gambia is what he always wanted. ‘I have always dreamt of playing AFCON. I definitely wanted to represent my African culture and heritage, because that’s the environment I grew up in.

‘I will remember this forever, it’s something that I will always have in my life. It’s an amazing achievement.’

So The Gambia should already be happy to have flown to Cameroon?

‘We were the underdog and the small team, but we were in the qualifying group as well,’ pointed out Saintfiet. ‘But we don’t want to put too much pressure on us. We will use this tournament to learn and develop our team. The ambition is to be a stable and respected football country that can regularly qualify for big tournaments, the next AFCONs and, why not, for the 2026 World Cup’.