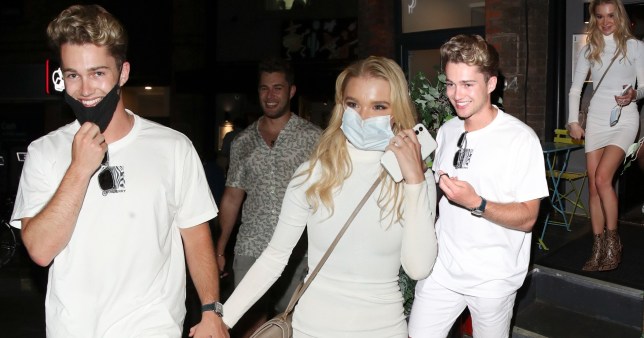 Three wasn’t a crowd as AJ Pritchard and girlfriend Abbie Quinnen headed on a night out with AJ’s brother Curtis Pritchard in tow.

The trio were all smiles as they were spotted enjoying a meal at Yucca restaurant in Fulham on Saturday night.

The Strictly Come Dancing star and Abbie held hands as they left the venue, both wearing face masks but looking cheery as they passed the paps.

The couple coordinated their outfits for the evening with AJ dressed casually in a white T-shirt and shorts with white trainers, while his girlfriend went for understated chic in a high-neck, long sleeved white dress with snakeskin print boots.

Curtis left the restaurant wearing large sunglasses which he later removed, and smiled away just a few steps behind them.

He was also wearing shorts like his sibling adding a patterned shirt and trainers to his outfit.

Abbie appeared relaxed for the outing which came just over six months on from when she suffered horrific burns after she and AJ tried to film a life hack for social media.

The 24-year-old needed three skin grafts amid 20 hospital visits, and has to moisturise her burns four times a day to keep her scars hydrated.

Curtis was all smiles (Picture: Backgrid)

She also has to wear a compression vest for 23 hours a day.

Opening up about the extent of her injuries, she revealed the last effects make her ‘sit inside and cry all day’.

‘I look at myself in the mirror and if I’m not happy with what I’m wearing I end up crying and just get back in bed,’ she said.

The Strictly star has supported his girlfriend since the accident (Picture: ITV)

‘I feel like I’m less fun now because I’m aware of everything around me.’

She added: ‘I am definitely very anxious… it’s a whirlwind of emotions, that’s for sure… I wonder why and when it’s going to be over.’

Abbie, a dancer, added that her face is ‘healing well’.

MORE : John Barrowman begins therapy amid allegations of ‘exposing himself’ on Torchwood set