Alessandra Ambrosio is no stranger to living the jet-setting life during her years as one of the world’s top models.

And on Thursday the Brazilian beauty celebrated her Thanksgiving holiday while on her tropical getaway to Hawaii with her family and beau Richard Lee.

Her holiday included getting her mind, body, and soul a healthy boost during a session of Yoga, and spending quality time with those she loves the most on the beach while soaking in the sun and the sites of the island of Kauai. 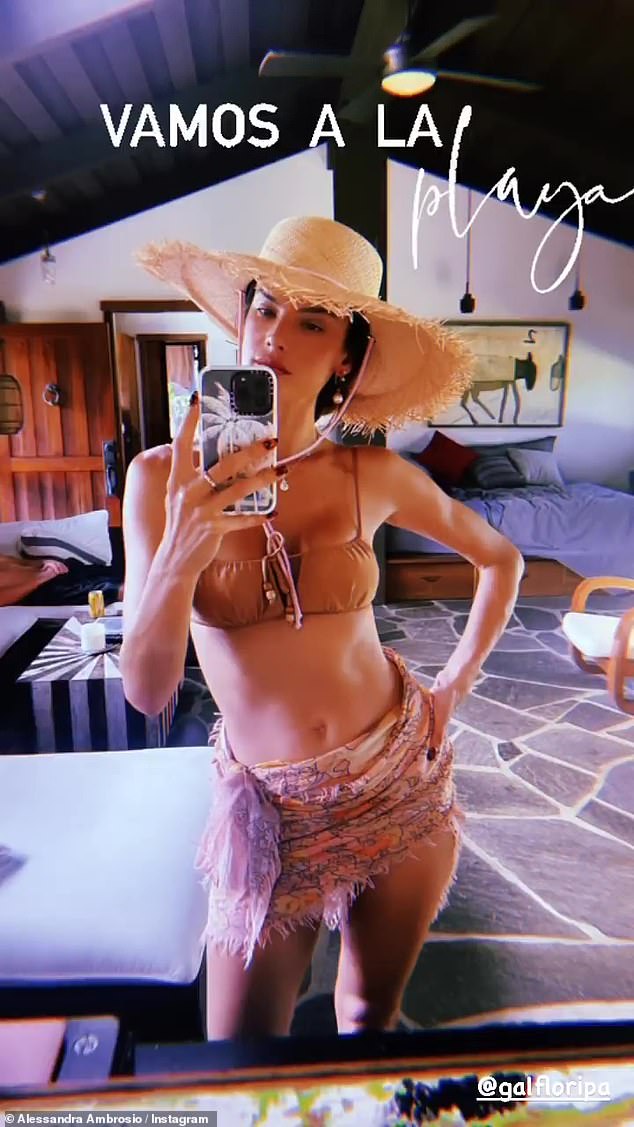 Holiday dress: Alessandra Ambrosio, 40, celebrated part of her Thanksgiving holiday decked out in a bikini on the beach in the island of Kauai in Hawaii

Ambrosio, 40, kicked off the post by sharing a video of the gorgeous greenery shot in the small town of Hanalei, which is a small town on the north shore of Kauai.

She would then give her 10.6 million Instagram fans and followers a glimpse at herself striking various Yoga poses at her favorite spot on the island, Waves Yoga Kauai.

For the workout, the longtime supermodel showed off her statuesque 5ft9.5in figure in leggings and a matching crop top. 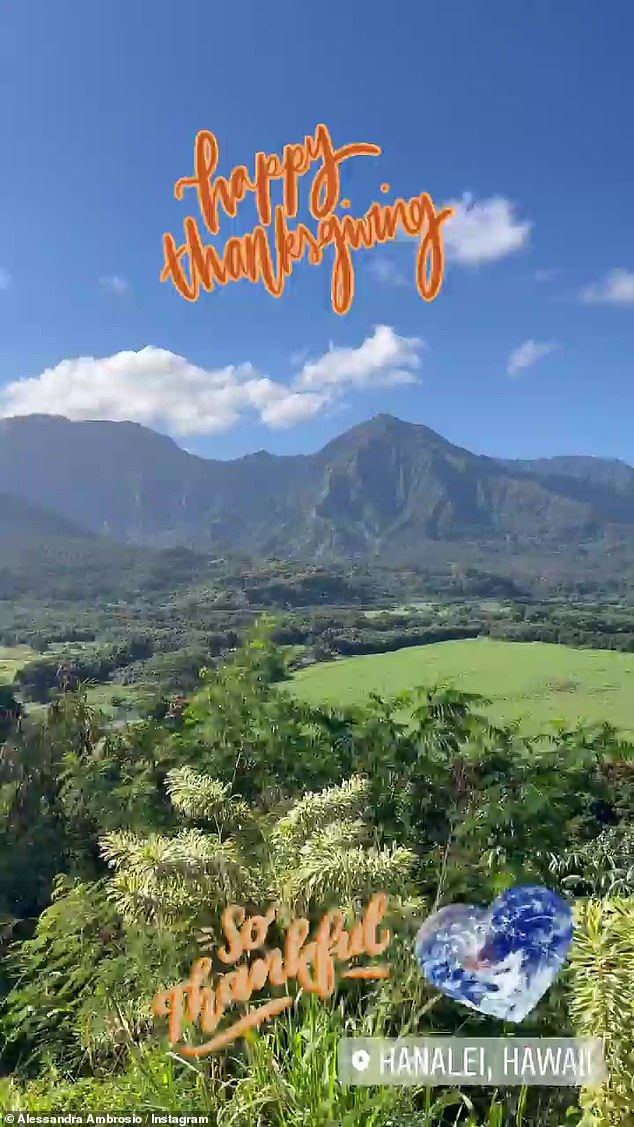 Ambrosio, 40, kicked off her holiday post by sharing a video of the gorgeous greenery in the small town of Hanalei, which is a small town on the north shore of Kauai 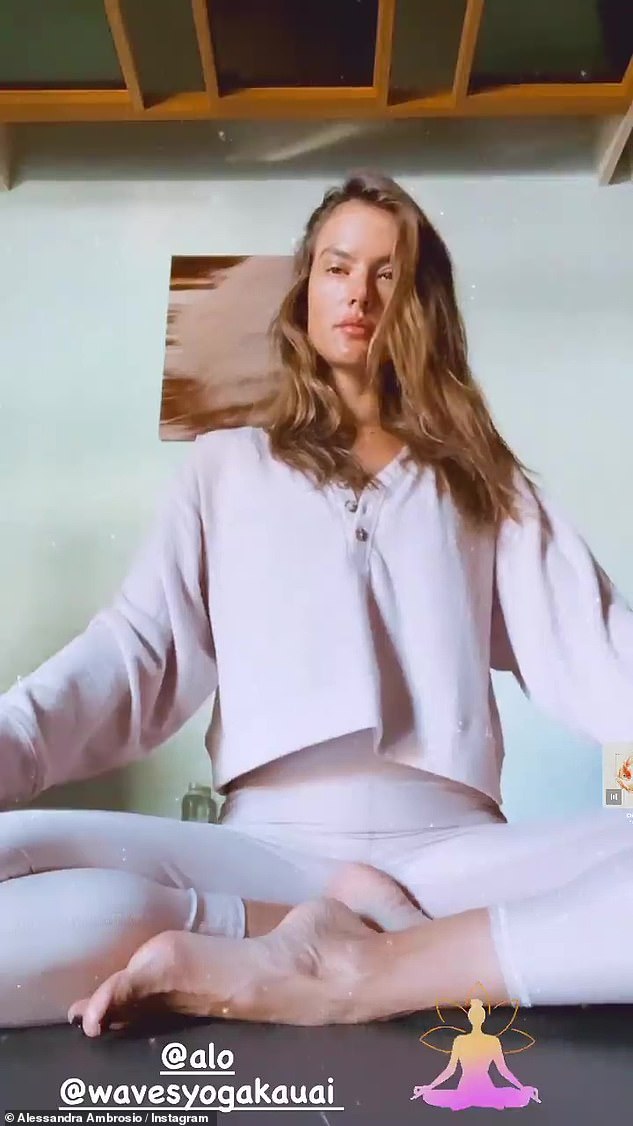 She gave her 10.6 million Instagram fans and followers a glimpse at herself striking various Yoga poses at her favorite spot on the island, Waves Yoga Kauai 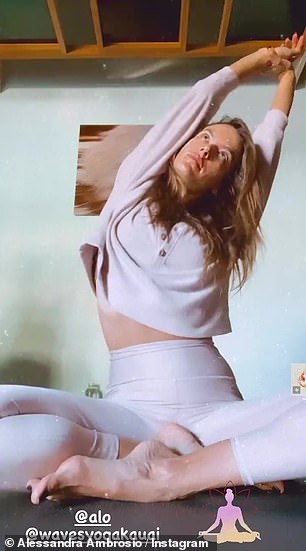 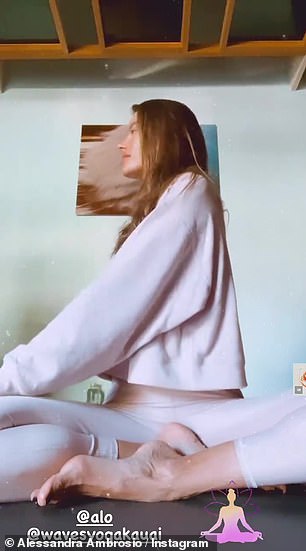 Fine form: Ambrosio incorporated Yoga as one of her main sources of exercise

After her ‘Yoga bliss’, Ambrosio met up with boyfriend, Richard Lee, who proceeded to get playful and flirty by giving her a quick kiss on the cheek.

At this point, the longtime Victoria’s Secret Angel had taken off her sweaty workout outfit and slipped into a brown sports bra ensemble.

Once back in their rented home, the couple also got playful with each other while trying out a popular phone app that turned their heads into a cooked turkey.

She wrote ‘turkey day’ across the video clip of the duo exchanging laughs over the turkey head application, all while they laid back on a sofa. 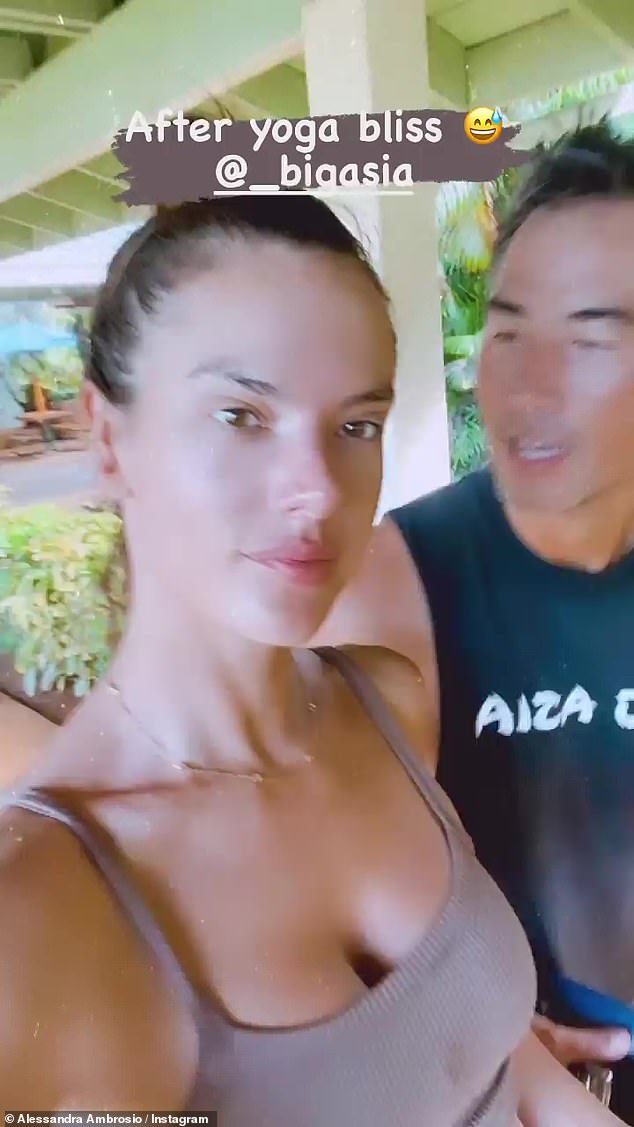 Loved up: After her ‘Yoga bliss’, Ambrosio met up with Lee, who instantaneously got flirty with her before heading back to their room 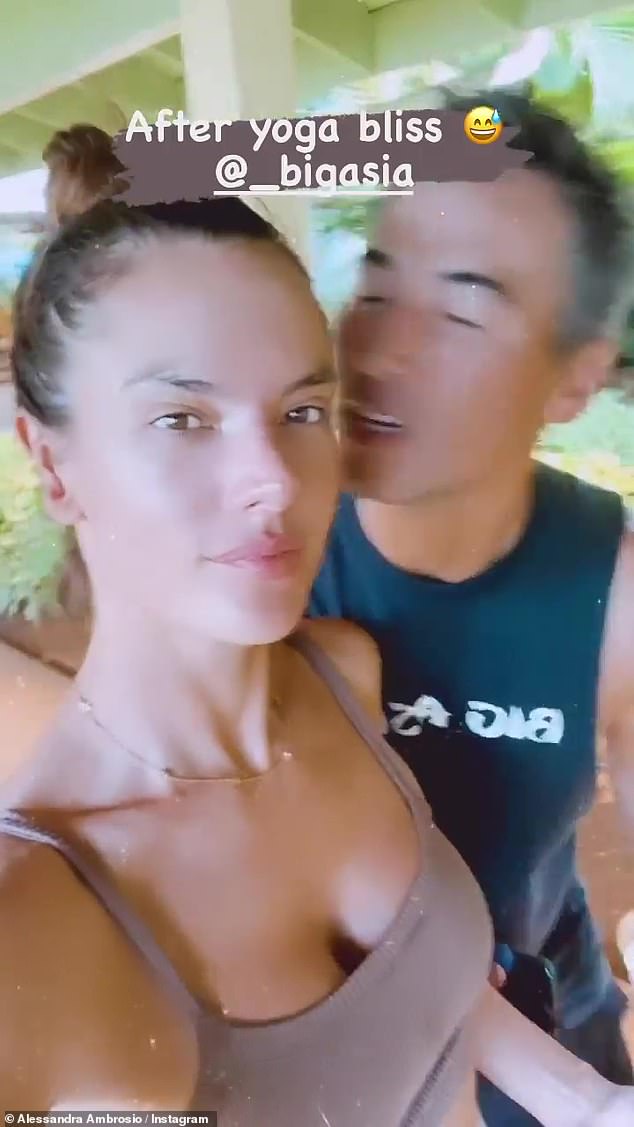 Flirty: Lee, who’s also a model, gave his lady a kiss on the cheek when they met up 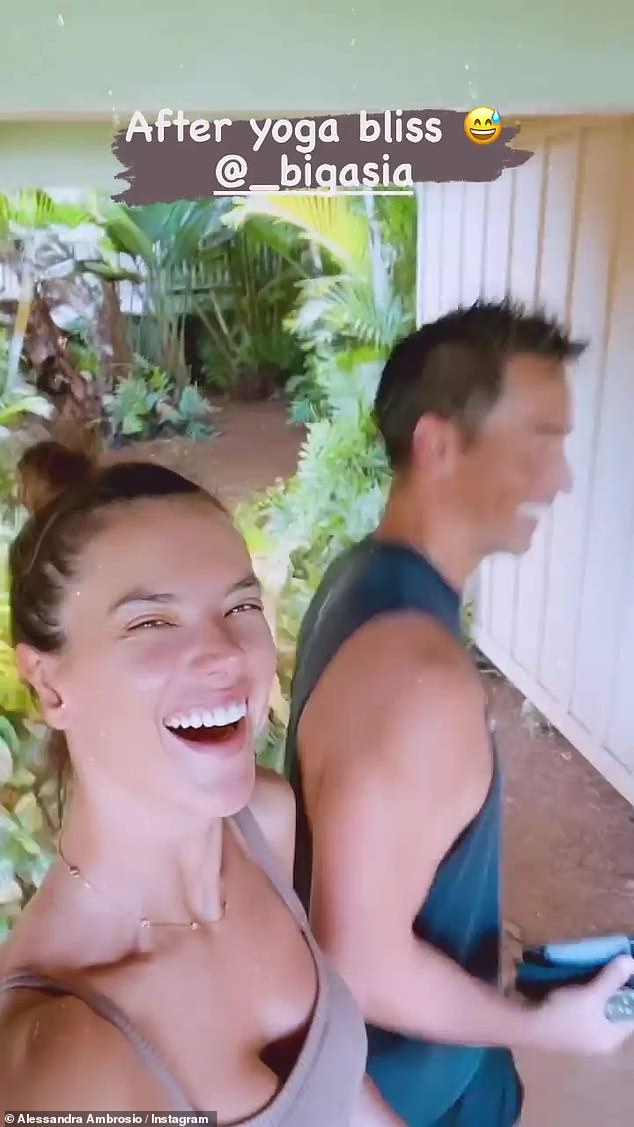 Beaming: The mother of two got a kick out of Lee and his playful manner

From there, Ambrosio changed into her bikini of the day, which also showed off her fab figure.

‘Vamos a la playa,’ she captioned her bikini snap, which translates in English to: ‘We’re going to the beach.’

And it turns out, the beach was in the backyard of the lovely accommodations she has while staying on the island of Kauai.

While relaxing on the sand, she shot video of her 13-year-old daughter, Anja, riding a nice wave on a boogie board all the way to shore. 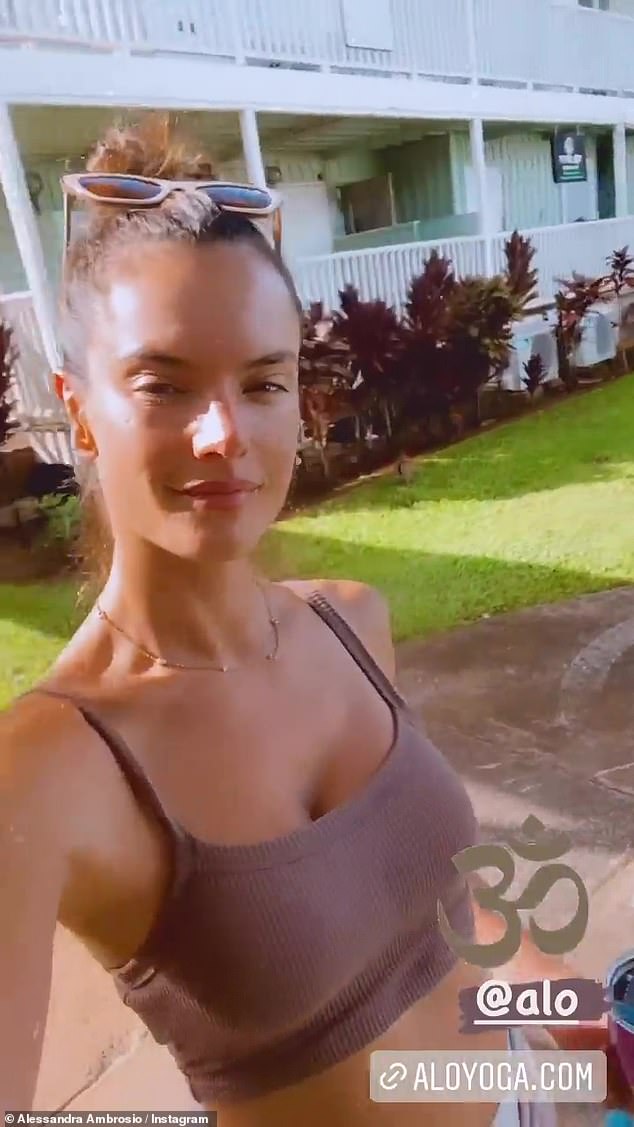 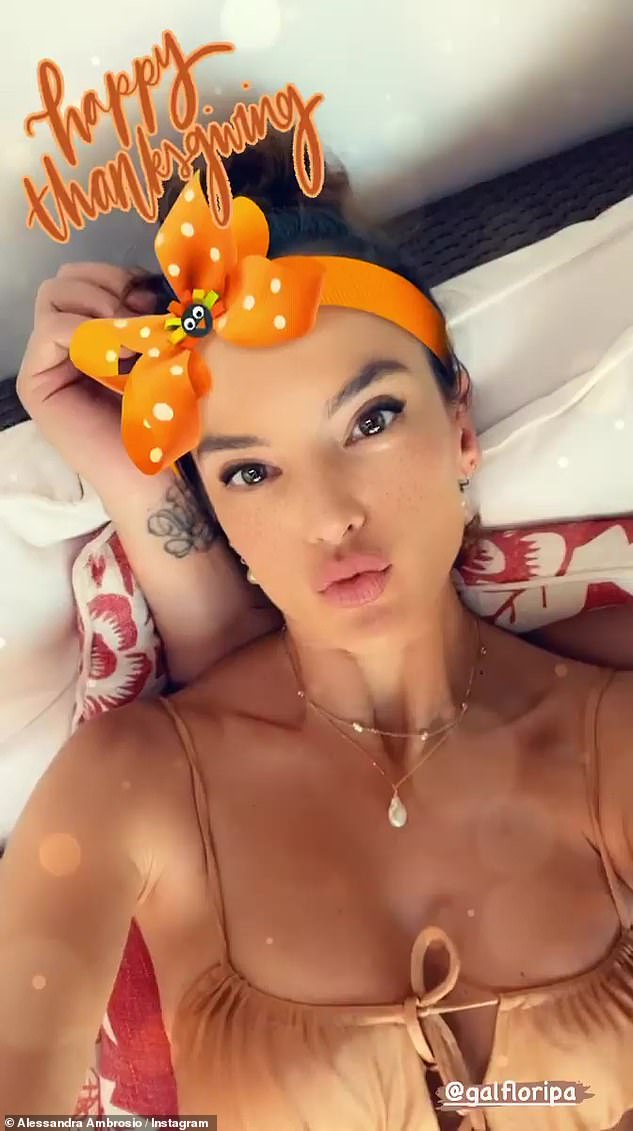 R&R: The Gal Floripa co-founder also got playful with Lee while lounging on a sofa 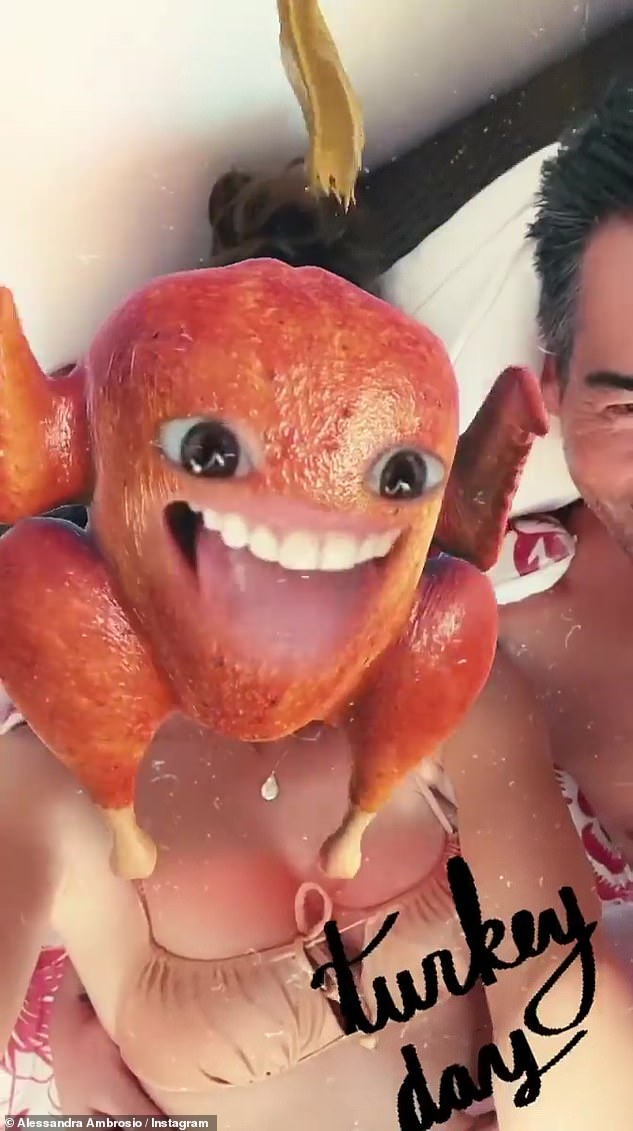 Turkey time: Ambrosio played with a phone app that turned heads into a cooked turnkey 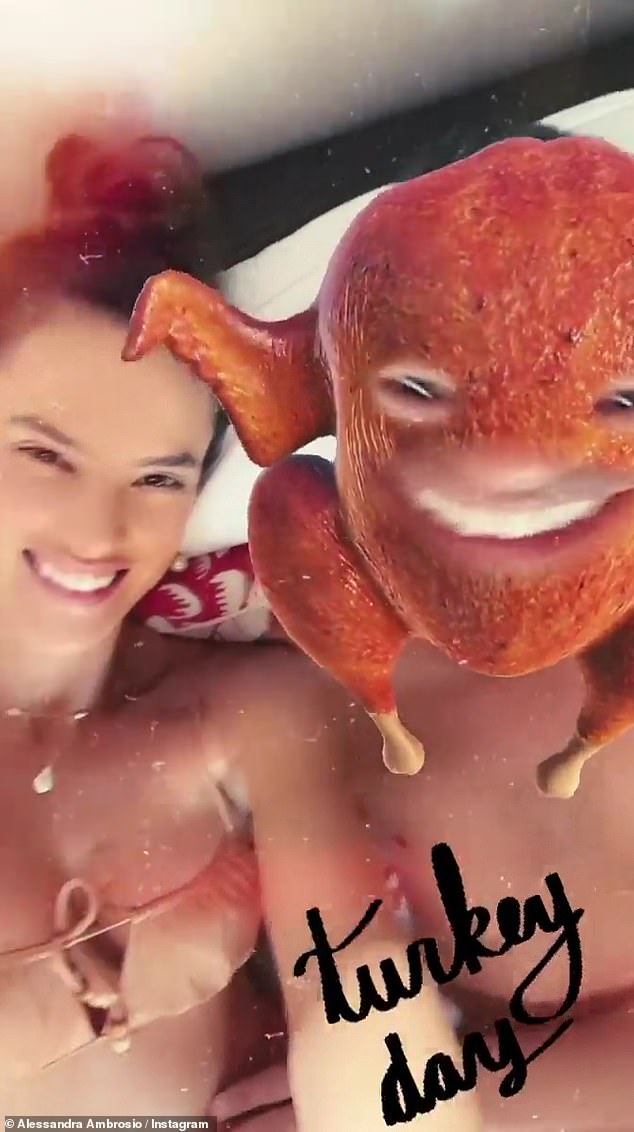 Turkey time: The model also got a kick out of turning Lee’s head into a turkey 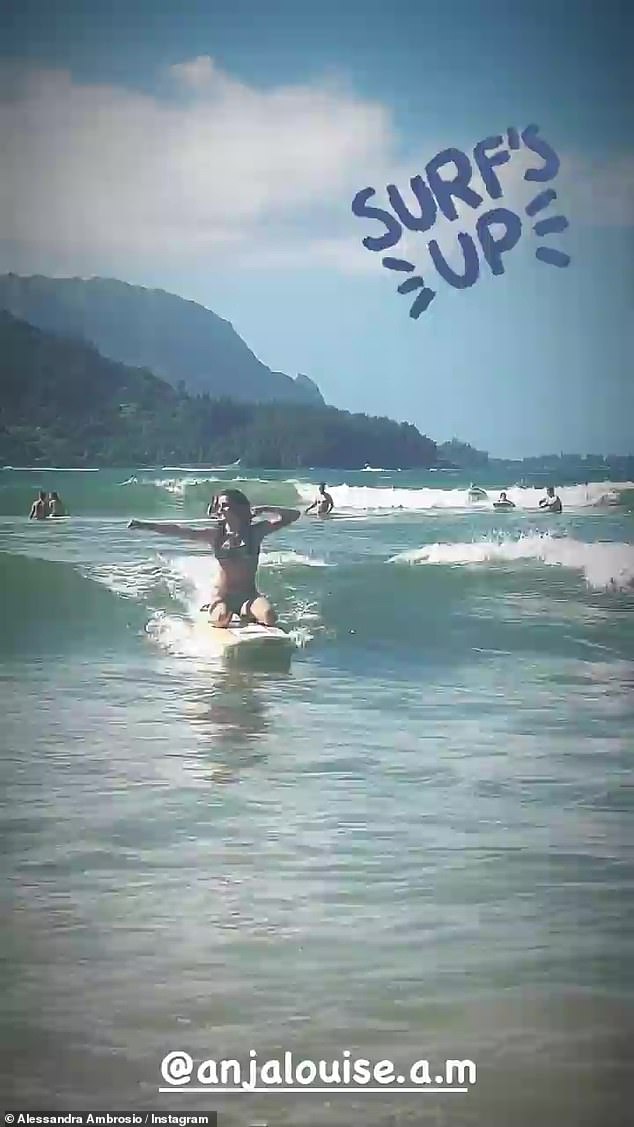 Fun in the sun: The proud mother shot video of her 13-year-old daughter, Anja, boogie boarding into in the shore 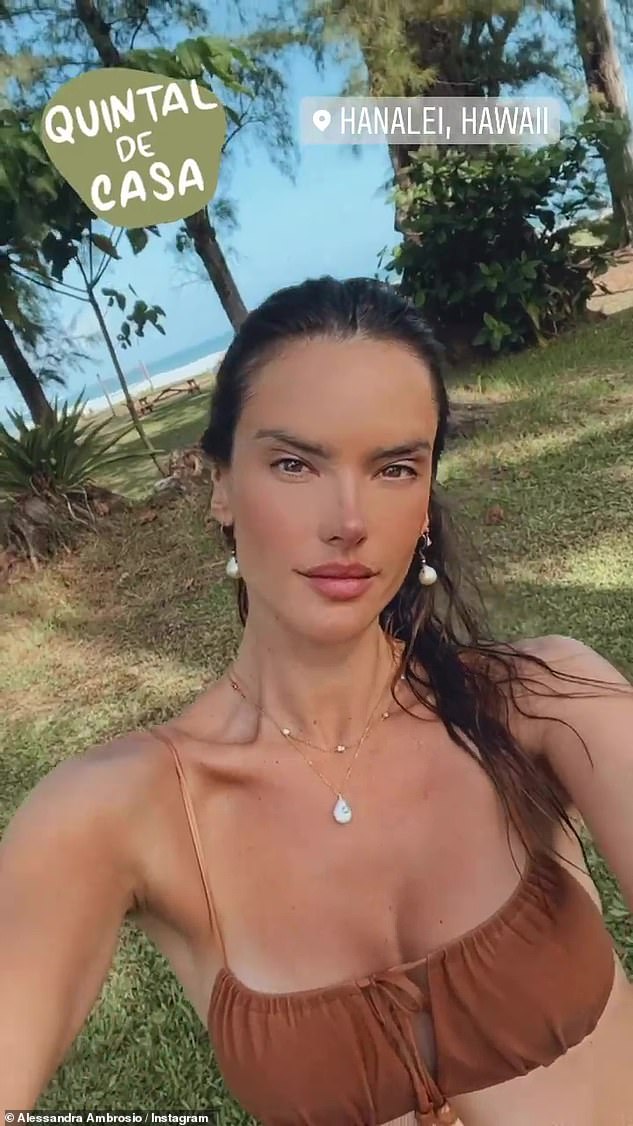 Living the life: Ambrosio shared that the ocean is in the backyard of her accommodations 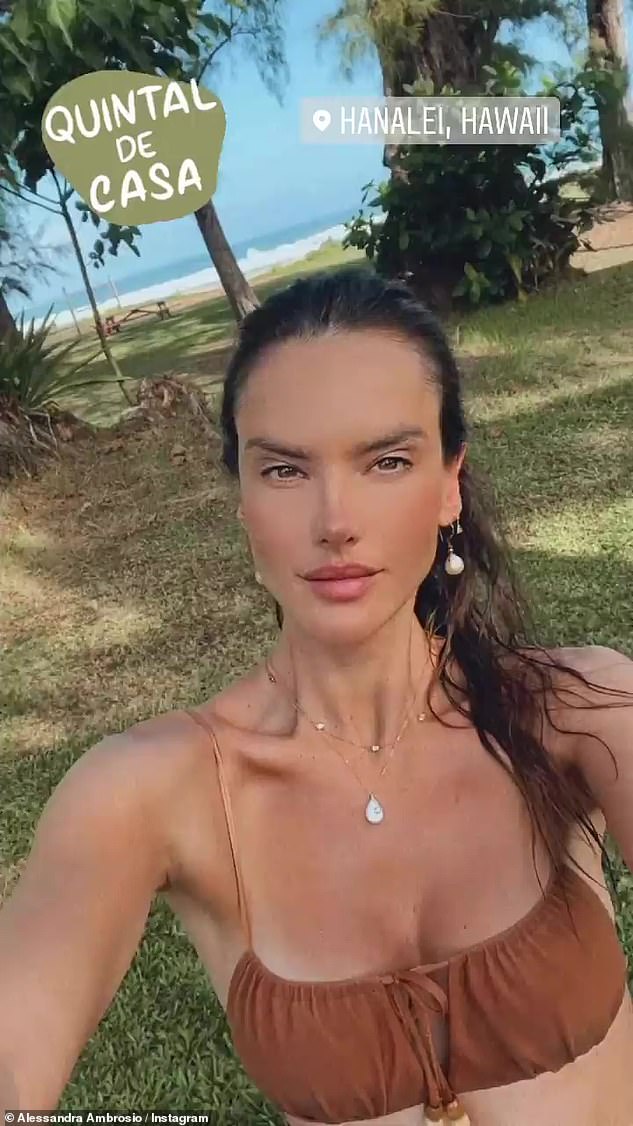 Tropical getaway: The famed supermodel has been sharing updates on her holiday in Hawaii on her Instagram page each day