Newcastle United’s players and staff have been introduced to part of the club’s new ownership group following their £305million takeover last week.

Amanda Staveley and her husband Mehrdad Ghodoussi were filmed greeting members of the Magpies squad as they received a tour of the club’s Darsley Park training ground on Monday.

Staveley, the PCP Capital Partners chief executive who has driven the takeover deal and is on the club’s new board, owns 10 per cent of the club’s shares with the Saudi Arabian Public Investment Fund (PIF) owning 80 per cent. 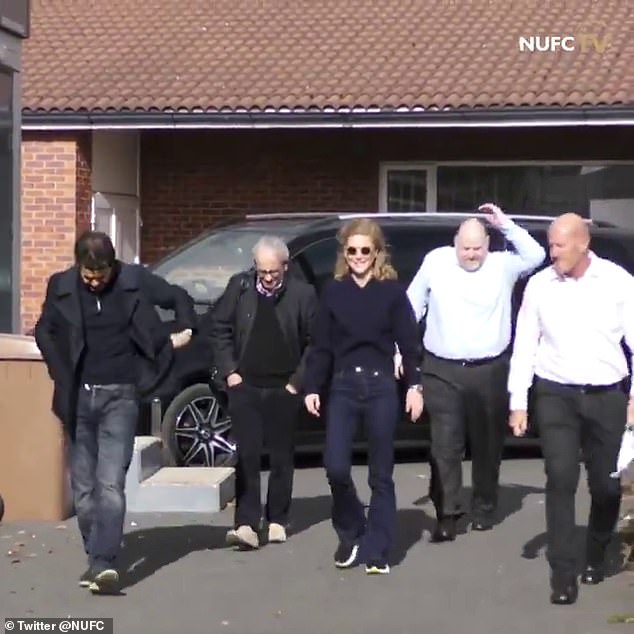 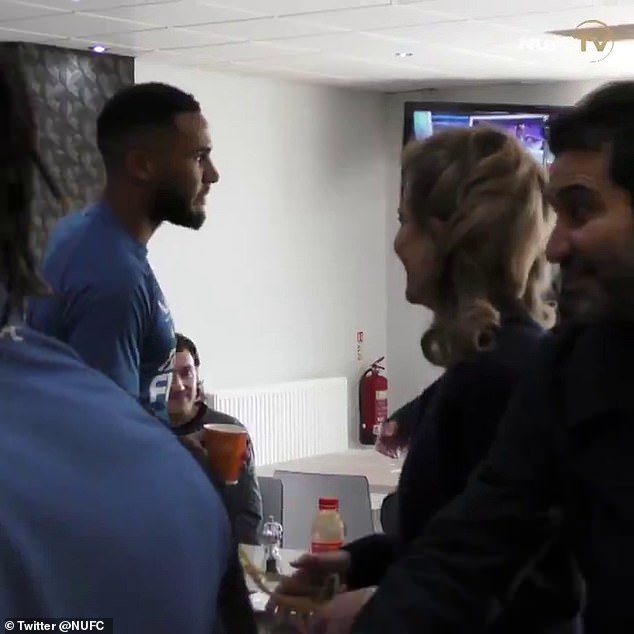 Staveley, who owns 10 per cent of the club, greeted the first-team stars in the dining room 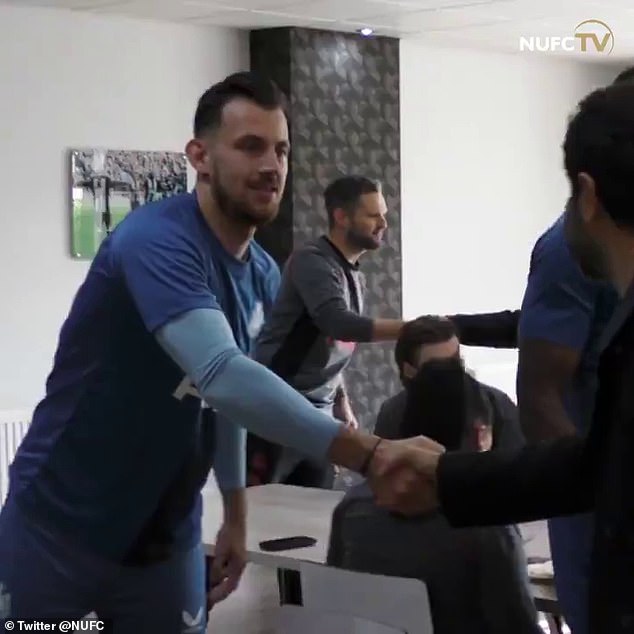 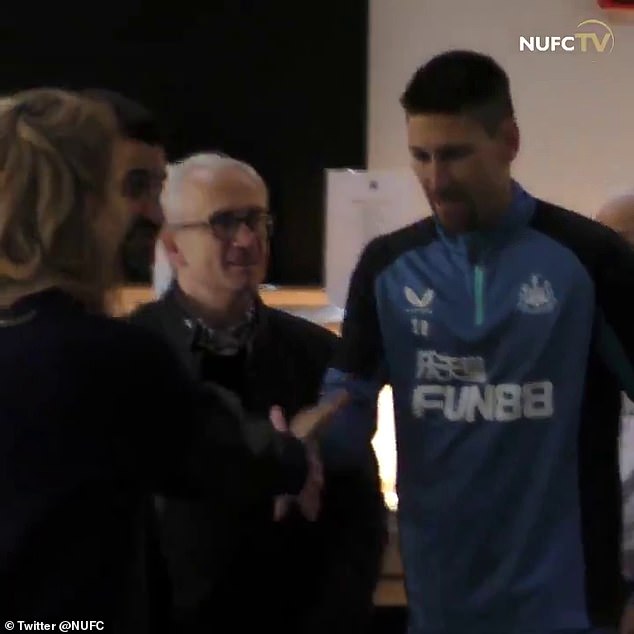 🎥 Amanda Staveley and Mehrdad Ghodoussi introduce themselves at the #NUFC training ground.

Staveley sits on the board with Jamie Reuben, representing Reuben Brothers, who own the remaining 10 per cent of the Premier League giants.

There was no sign of PIF governor Yasir Al-Rumayyan but Staveley and Ghodoussi got stuck into the running of the club on Monday and a visit to the training ground was on the agenda.

First-team players made their return to training on Monday morning after three days off and were granted a meeting with the club’s new owners.

Staveley and Ghodoussi were filmed greeting members of the first-team squad in the canteen, shaking hands with the likes of captain Jamal Lascelles, Allan Saint-Maximin and Federico Fernandez.

They were filmed in discussion with Argentine defender Fernandez before moving on to greet some members of the backroom team and making their way out onto the training pitch. 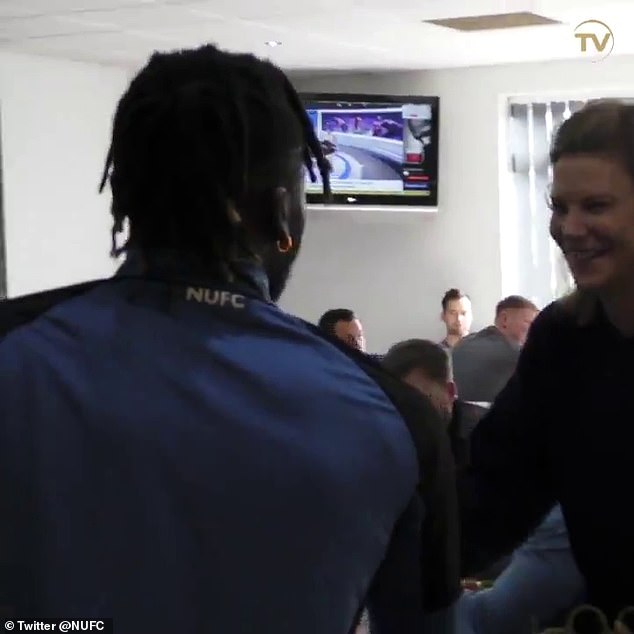 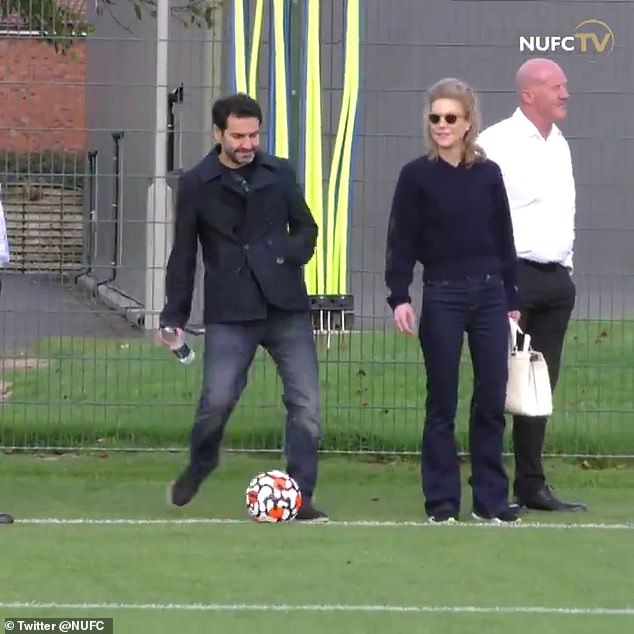 Ghodoussi even showed his technical skills, dribbling a ball onto the pitch before passing it to someone off camera.

One noticeable absentee, however, was manager Steve Bruce with the club’s new owners expected to relieve him of his duties this week.

Bruce was at the training ground on Monday but did not appear in the footage that was released by the club of Staveley meeting the players.

As Sportsmail reported on Sunday, the 60-year-old will be sacked imminently after Newcastle’s owners realised the negative impact his presence could have in their opening game against Tottenham on Sunday.

Sportsmail reported last week that the 60-year-old would be leaving in light of the Saudi-led takeover, and that his pay-off stands at £8million. Talks will now begin over the terms of his exit.

Staveley and her advisors have a shortlist within a longer list of names identified as his replacement, but that appointment could take some time to finalise.

Former Borussia Dortmund boss Lucien Favre is one of those under consideration, as well as Leicester’s Brendan Rodgers and Rangers boss Steven Gerrard.

Favre, 63, has been out of work since leaving Dortmund last December and turned down an offer from Crystal Palace in June, but it is thought he is now ready to return to management.

Assistant head coach Graeme Jones is set to be put in temporary charge for the sell-out clash with Spurs live on television.

Sources say the new owners have realised that to leave Bruce in place for Sunday’s game risks spoiling what promises to be a jubilant atmosphere.