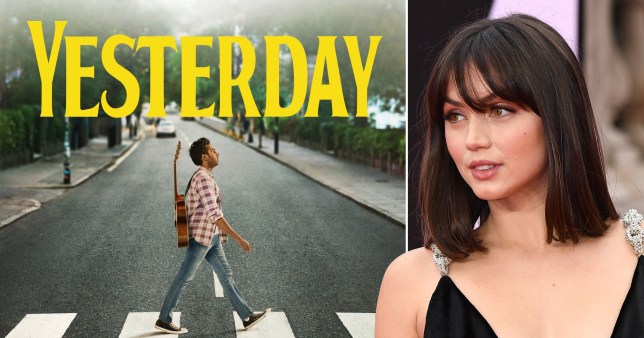 Ana De Armas did not appear in the final cut of Yesterday (Picture: REX / Getty)

Fans of Ana De Armas have sued the filmmakers for the film Yesterday after the film did not feature the actress in the final cut.

Two fans have filed a consumer protection class action lawsuit against Universal, alleging ‘deceptive, and misleading advertising’ for the 2019 film, after De Armas appeared in the trailer but not in the film.

Conor Woulfe and Peter Michael Rosza said that they paid $3.99 (£2.94) to watch the film on Amazon after watching the trailer.

The lawsuit states: ‘Among other deceptions, Defendant’s nationwide advertising and promotion of the movie Yesterday represents to prospective movie viewers that the world famous actress Ana De Armas has a substantial character role in the film.’

It claims that the other stars, EastEnders legend Himesh Patel and Mamma Mia star Lily James were ‘relatively unknown’ to the casual movie-viewer, so De Armas’ star power was used to promote the film.

It seeks damages for ‘all money obtained from Plaintiff and the other members of the Class collected as a result of Defendant’s unfair competition, and for an injunction prohibiting Defendant from continuing and further engaging in its unlawful, unfair and fraudulent conduct, requiring corrective advertising, and awarding all other relief this Court deems appropriate.’

Screenwriter Richard Curtis explained De Armas being cut from the film, saying: ‘Ana De Armas as a complicating factor when he [Jack (Patel)] arrived in LA for the first time.

‘You know, it’s one of those things where it’s some of our favourite scenes from the film, but we had to cut them for the sake of the whole.’

Yesterday, released in 2019, is a romantic comedy that follows struggling musician Jack as he suddenly finds himself as the only person in the world to have heard of The Beatles.

Metro.co.uk has contacted Universal Pictures and reps for Ana De Armas for comment.

MORE : Ana de Armas to reunite with Knives Out co-star Chris Evans as she replaces Scarlett Johansson in Ghosted