Ansel Elgort drastically changed up his look by shaving his head recently.

The 27-year-old Baby Drive actor was seen grinning and showing off his closely buzzed hair in a photo shared to Instagram on Monday by a friend.

The updated on Elgort’s appearance comes nearly 13 months to the day after a Twitter user going by the handle @Itsgabby accused him of sexually assaulting her in the midst of a relationship years earlier when he was allegedly 20 and she was only 17. 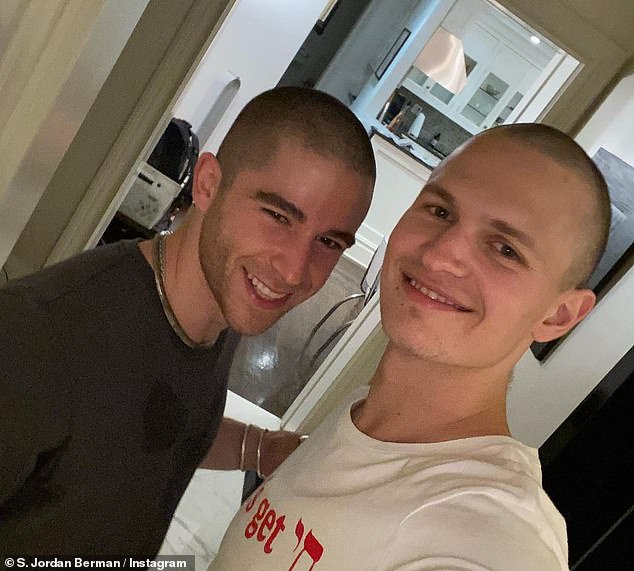 New look: Ansel Elgort, 27, grinned as he showed off his new ultra-close buzz cut in a friend’s Instagram post from Monday. The hair reveal comes a year after he was accused of sexual assault

Elgort appeared to have snapped the selfie while posing in a living space with his pal.

He had on a white graphic T-shirt and beamed for the camera.

The Goldfinch star was also featured in another video as he danced up a storm while watching a band perform to a sparse crowd at what looked like a bar.

Last month, the same friend shared a photo with Elgort in which he sported shaggy hair. 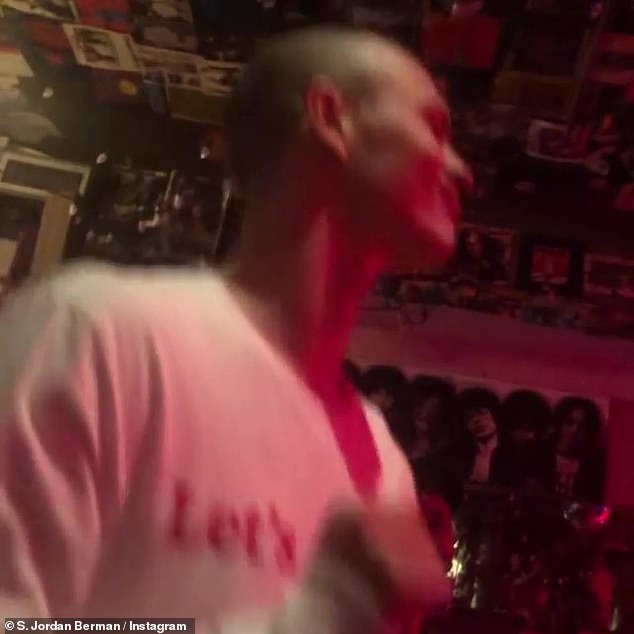 Letting loose: The Goldfinch star was also featured in another video as he danced up a storm while watching a band perform to a sparse crowd at what looked like a bar 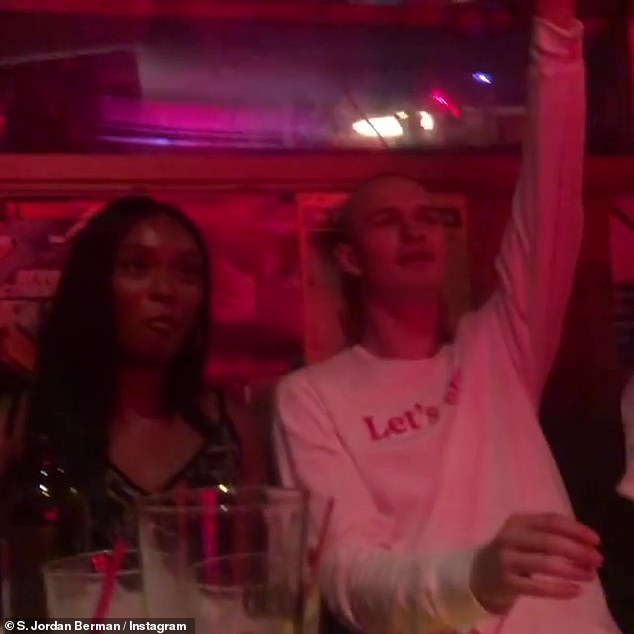 Taking it easy: Afterward, he relaxed on a bench with friends while surrounded by drinks 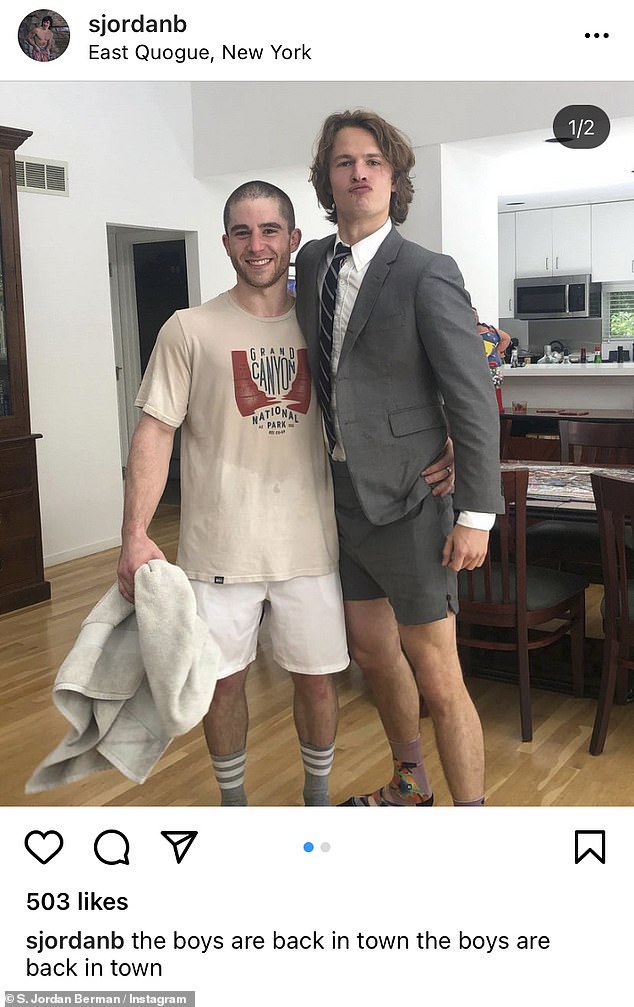 What a difference: Last month, the same friend shared a photo with Elgort in which he sported shaggy hair and a school boy uniform that made him look like AC/DC guitarist Angus Young 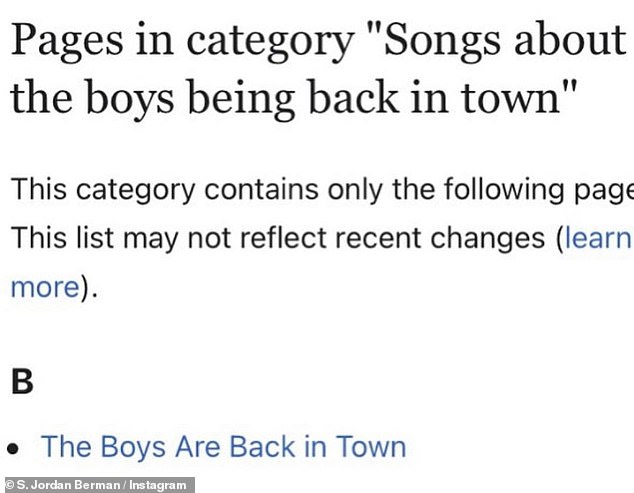 He’s back: His friend joked that ‘The Boys Are Back In Town,’ after the 1976 classic from Thin Lizzy

He was dressed in a gray blazer with gray shorts, a school boy’s uniform reminiscent of AC/DC lead guitarist Angus Young’s iconic costume.

He followed the photo up with a joking Wikipedia screenshot of ‘Pages in category “Song about the boys being back in town.”‘

Naturally, there was only one entry, Thin Lizzy’s 1976 classic The Boys Are Back In Town. 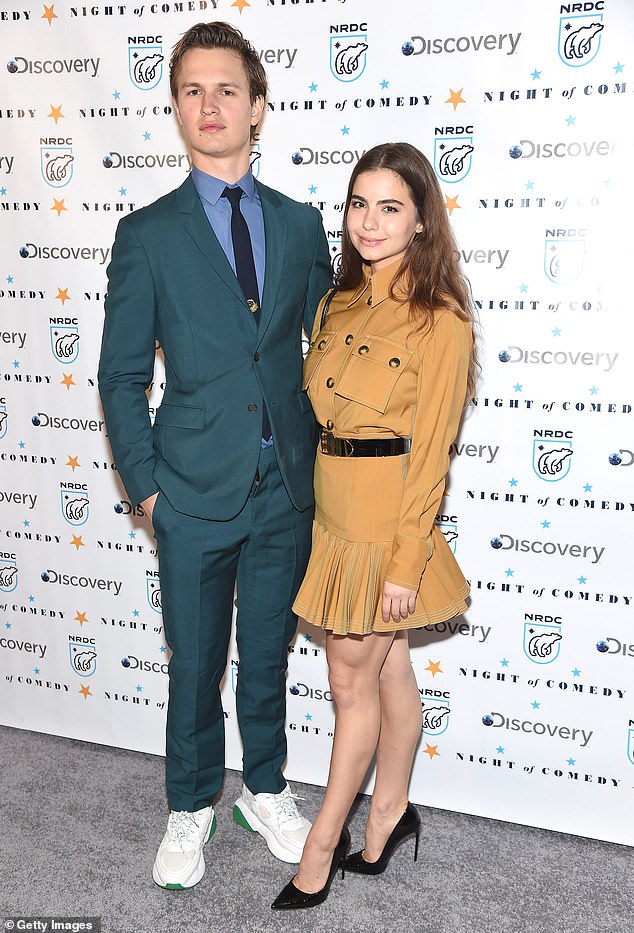 Serious accusation: In June 2020, a twitter user accused Elgort of sexually assaulting her when she was allegedly 17 and he was 20; seen in 2019 with girlfriend Violetta Kornyshan

Despite the seemingly triumphant tone of the recent posts, Elgort has been keeping a low profile over the past year after he was accused of sexual assault.

In June of 2020, the twitter user @Itsgabby shared her ‘story of Ansel Elgort,’ claiming she was ‘sexually assaulted a couple days after I turned 17.’

She wrote that she had DMed the rising Hollywood star when she was ‘just a kid and was a fan of him,’ though she didn’t expect a reply.

The user claimed that Elgort had had sex with her when she was a minor and hadn’t stopped after she was clearly in pain.

‘So when it happened instead of asking me if I wanted to stop having sex knowing it was my first time and I was sobbing in pain and I didn’t want to do it the only words that came out of his mouth were “we need to break you in,”‘ she wrote. ‘I WASN’T there in that moment mentally. I disassociated myself and just felt like my mind was gone I was in shock.’

She also posted DMs that appeared to from the actor that were dated to 2014, as well as a photo that was purportedly of her with Elgort, though her face was partially blocked out by her hand. 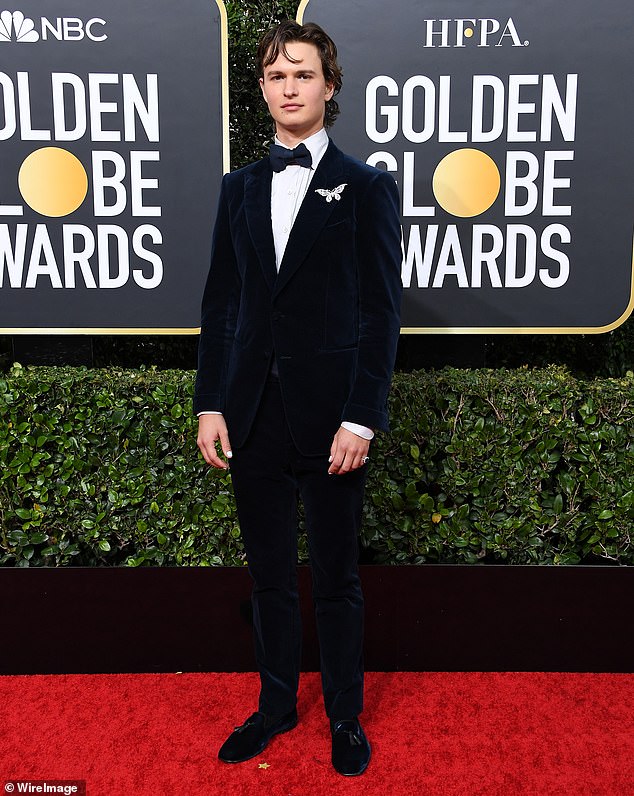 Changing the subject: Elgort denied the accusation and instead apologized for the manner in which he broke up the accuser; seen in January 2020 in Beverly Hills

The user added that she was too small to have fought Elgort off.

‘He made me think this is how sex was supposed to be. I WAS SO YOUNG AND HE KNEW THAT,’ she continued. ‘He as well said stuff like “you’re going to be such a beautiful young lady when you’re older.” I was f***ing 17.’

The user, who claimed to suffer from PTSD following the alleged assault, said that Elgort told her not to speak of their relationship because it could ‘ruin his career.’

‘I cannot claim to understand Gabby’s feelings but her description of events is simply not what happened,’ he wrote, before alleging that ‘Gabby and I had a brief, legal and entirely consensual relationship.’

However, he apologized for the manner in which he broke up with Gabby.

‘As I look back at my attitude, I am disgusted and deeply ashamed of the way I acted,’ he wrote.

In the can: He had already finished filming his lead role in Steven Spielberg’s upcoming West Side Story adaptation when the accusation was posted; still from the West Side Story trailer

It’s not currently clear to what extent the accusation may have slowed Elgort’s career.

He’s currently set to play the lead role of Tony in Steven Spielberg’s highly anticipated adaptation of West Side Story, but principal photography was completed prior to the accusation.

When the film’s trailer was released in April, the star had a notably limited presence in it.

He’s also set to star in the upcoming Michael Mann–produced HBO Max series Tokyo Vice, in which he stars as a Western journalist living in Tokyo who delves into the city’s seedy underworld.

Filming began in early March 2020 but was delayed shortly afterward due to the spread of the novel coronavirus.

No mention had been made of Elgort being replaced, and production resumed in November before concluding last month, presumably with him still in the lead role. 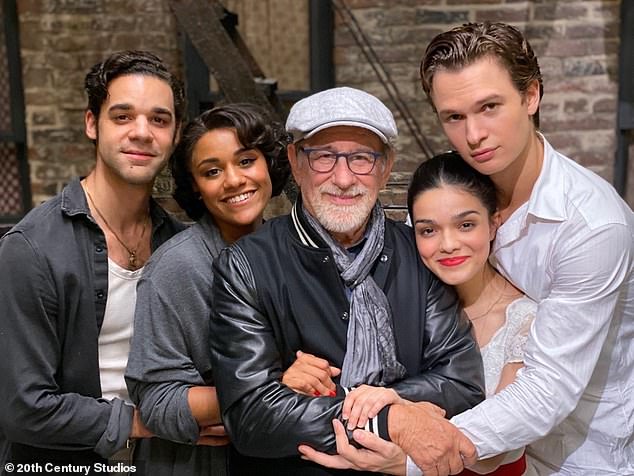 Back at it: In addition to West Side Story, he set to lead the HBO Max series Tokyo Vice, which resumed filming in November