It was the sheer nonchalance of it. The casual ease with which Sadio Mane guaranteed another lap of the title race. He won this match as if it were a training ground exercise, not a potential championship decider. He scored his header as if it was the last play of a Friday five-a-side, not a goal that keeps Liverpool in the hunt for an unprecedented quadruple.

There were 65 minutes gone, and the scores were level. Still plenty of time, but a lot at stake. Liverpool’s domestic league campaign was riding on what unfolded here.

Already three points behind Manchester City they could not afford to drop two more. There was a possibility that, going into this weekend, Liverpool could trail by five. If that were the case, Manchester City could have the league won by Sunday afternoon.

Liverpool needed a goal, and they got a goal. Yet it was the insouciant manner of Mane’s finish that caught the eye. It was a cool, first-time take, converted as if of small consequence. The last in a convincing cup win over lower league opposition perhaps; a goal in the 85th minute of a Champions League group stage dead rubber.

Only when Mane fell to his knees and kissed the turf in thanks, did the true significance of his intervention show. 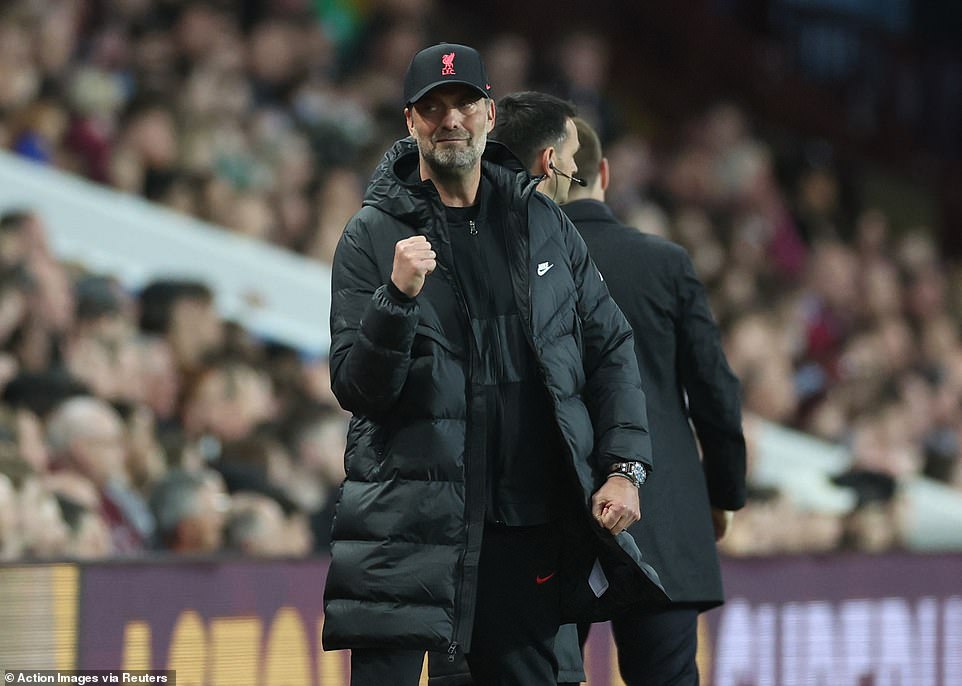 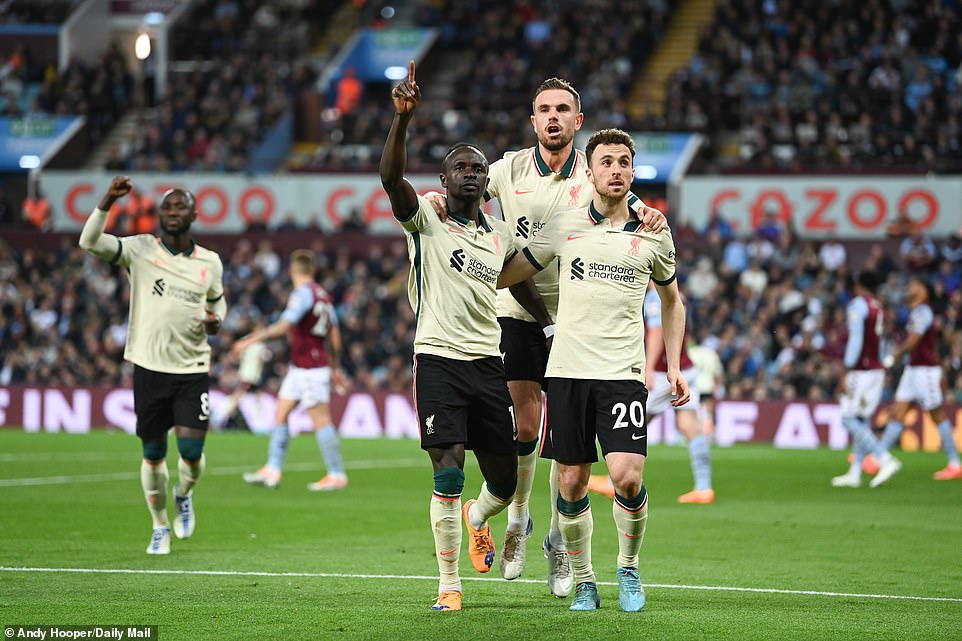 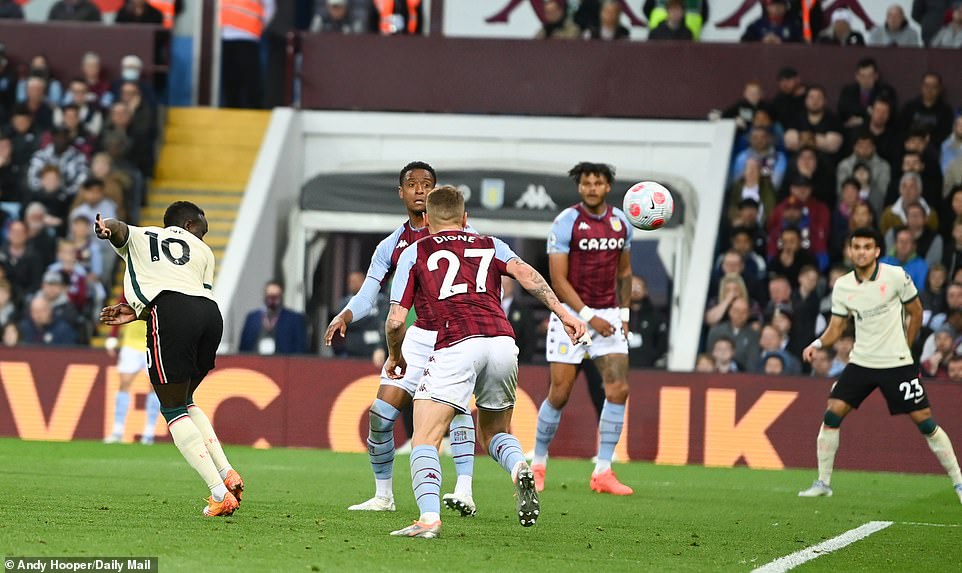 Mane won this match as if it were a training ground exercise, not a potential title decider by scoring a nonchalance header 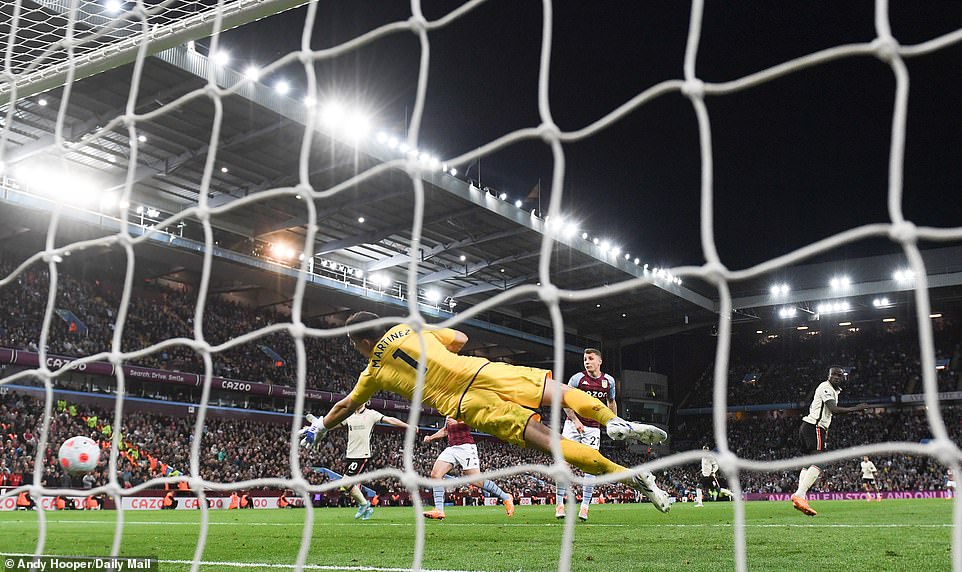 Liverpool now have three players on 15 goals or more in this campaign, Mane joining Mo Salah and Diogo Jota. In the Premier League era, only the Manchester City side from 2013-14 can claim that: Sergio Aguero, Yaya Toure and Edin Dzeko.

It was such a simple winner, too. Luis Diaz crossed from the left and Mane drew back and almost tiptoed away from Douglas Luiz and Lucas Digne guarding the centre.

The ball arrived, he stooped slightly and glanced it into the corner of the net. Liverpool are going to push City all the way. If they falter in Wolverhampton, only goal difference will separate them again.

There was a blow for Liverpool, in the hamstring injury to Fabinho, which took him out after 29 minutes. If it is as troublesome as it appears, he may miss the rest of the domestic season, maybe even the Champions League final.

But Jurgen Klopp will be pleased with the resilience of his team after the worst possible start, behind after six minutes, and delighted that Danny Ings did not stay onside before shooting past Alisson with five minutes remaining. A terrible touch by Ings saved Liverpool in the 68th minute, too, when he was put through one on one by Ollie Watkins. To be fair, it was the only favour an ex-Liverpool man did them all night. 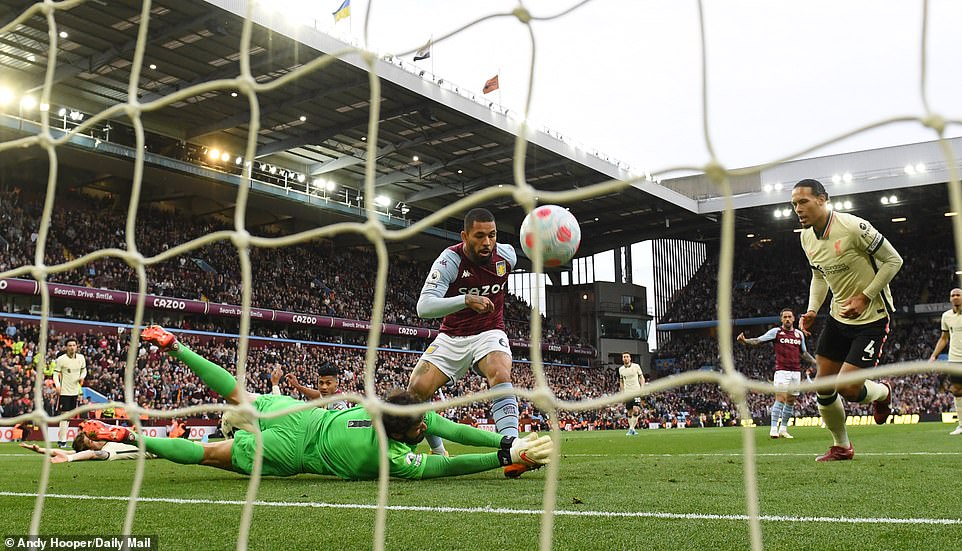 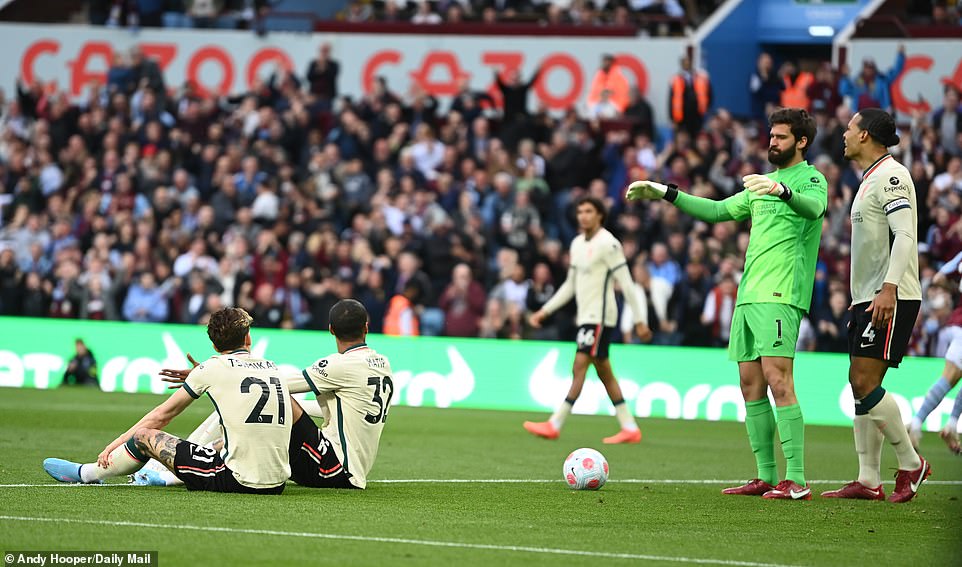 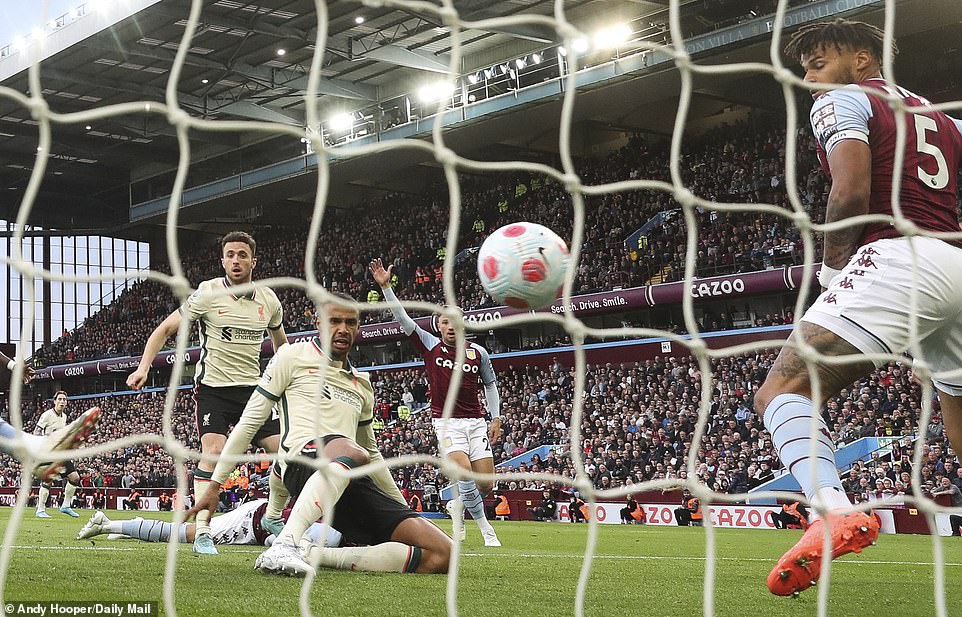 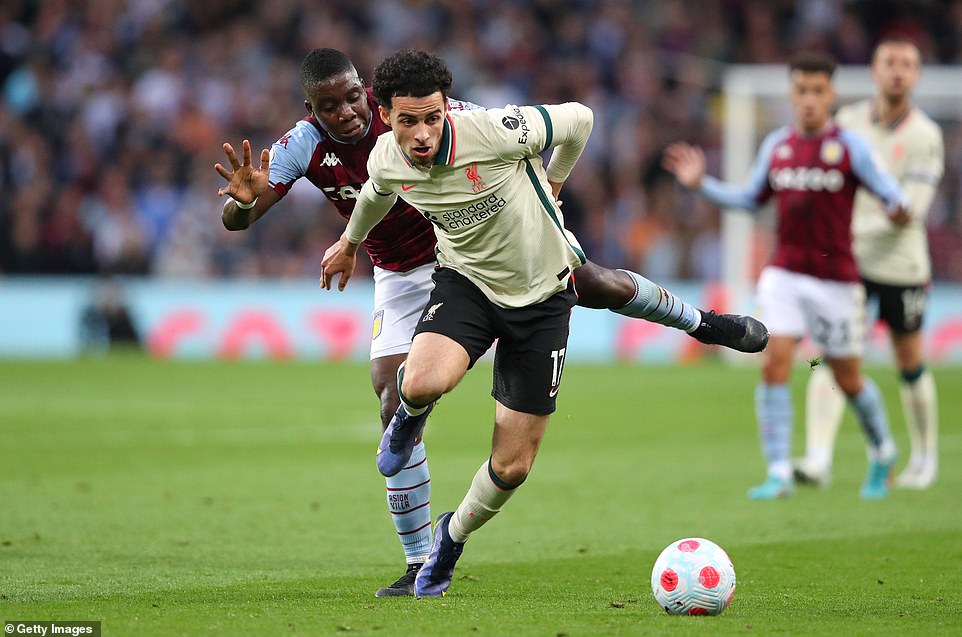 Maybe it is because we live in an age of conspiracy theories and conspiracy theorists, but it seems this time of year, every year, there is a game in which a manager, or a club, is expected to do an old pal a favour.

This season, it is Steven Gerrard and Aston Villa. Apparently, he would roll over and let Liverpool win, then marshall a superhuman effort to defeat Manchester City on the final day of the season, thereby delivering the title to Anfield.

So it must have come as quite a surprise to the tin foil hat brigade when Gerrard’s Villa took the lead after three minutes. A shock, too, when they kept pressing, kept trying to score a second, in what was a cracking, end to end match.

Their lead had lasted all of three minutes, of course, but that is because Liverpool are one of the most determined teams in the country, not because Gerrard was imploring his players to go easy, or passing notes to his old boss Klopp on how to beat his team.

English football isn’t like that. Plus, if Gerrard wants to be Liverpool manager one day he needs milestones in his career, results and performances that catch the eye. A tame display was no use to him here.

Liverpool won, but they will have left impressed with what they saw from a Gerrard team. And they won because that is what they do against the weaker teams this season.

This is the 19th game Klopp’s team has played against opponents who were in the bottom half of the table: and they have won all 19.

Yet despite Pep Guardiola’s suspicion that the entire country are in the Liverpool fan club, there was no quarter given at Villa Park. The home team were up for having their say in the title race, the locals grew increasingly furious when decisions went Liverpool’s way. And rather a lot did seem to go Liverpool’s way.

Jon Moss didn’t seem to do Villa too many favours. He spotted a lot of fouls on Liverpool men, waved away similar appeals from Villa. There were suspicions the build up to Liverpool’s first goal included a foul by Jota, too; then again, a Liverpool defender hit the deck when Villa opened the scoring, and Moss was having none of that, either.

It was more cock-up than conspiracy, really. Joel Matip and Konstantinos Tsimikas got into a terrible mess trying to deal with a Digne cross, bodies fell to the floor, allowing Luiz a free header which he sent in the direction of goalkeeper Alisson. The Brazilian saved well, but couldn’t keep hold of the ball and Luiz was quickest to react, prodding it past him to mark his 100th appearance for the club in style.

And it wasn’t even Villa’s first chance of the game. Moments earlier, Watkins had got loose and forced a fabulous save from Alisson. So much for the easy ride. 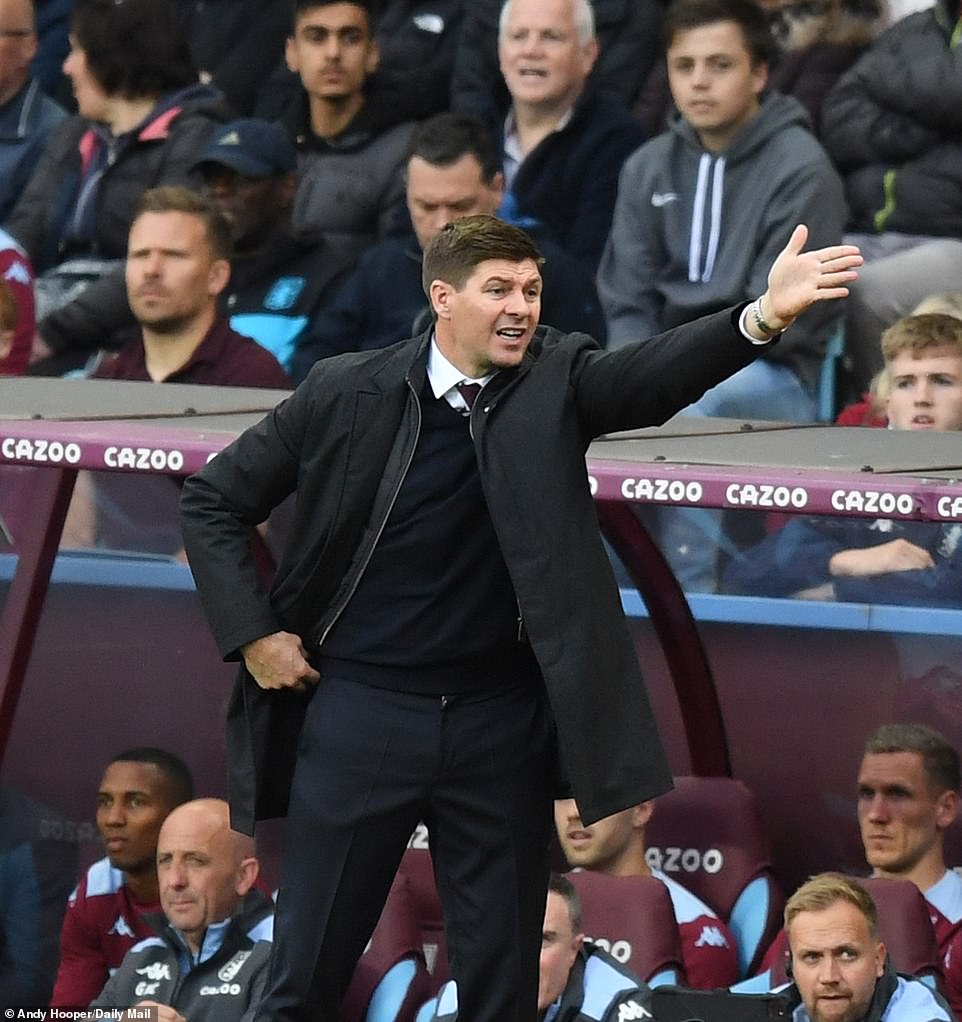 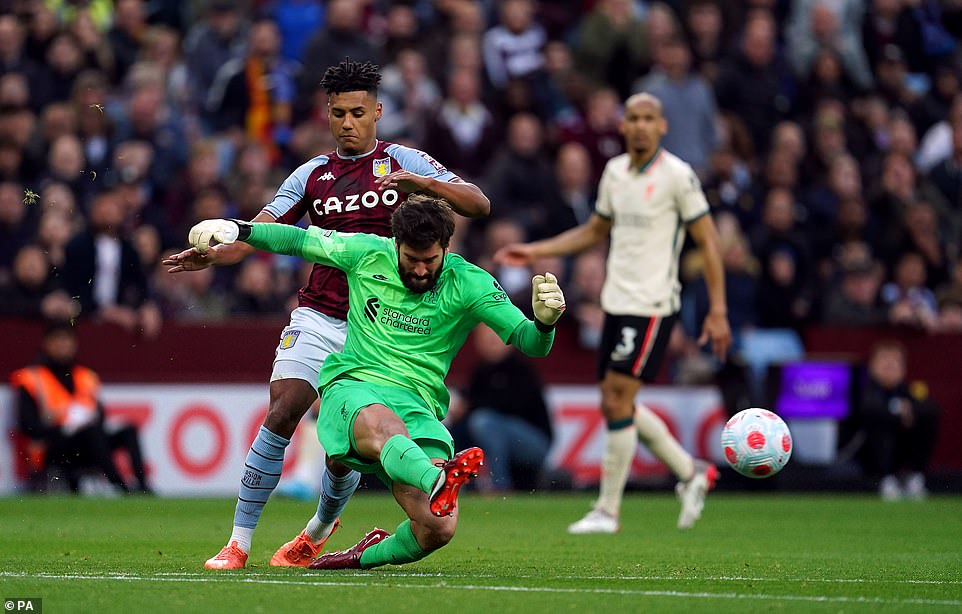 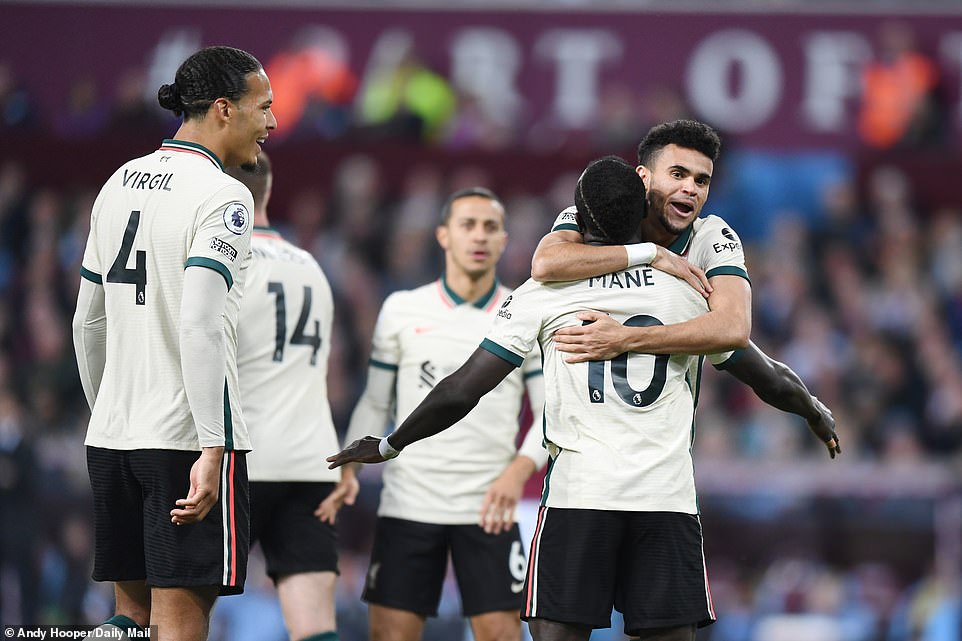 Not that Villa had long to enjoy their superiority. Liverpool’s next attack ended in more goalmouth chaos, and another goal. Trent Alexander-Arnold took a flat free-kick which went directly to Tyrone Mings, who didn’t so much clear it as stamp it into the ground like a particularly unwelcome spider.

He tried to get it away but the ball ended up with Virgil van Dijk. His cross was blocked and then moved on by Jota, who came at it much as Bruce Lee would an evil ninja. That was the foul play Villa thought Moss missed. Back across goal the ball fell to Matip who had the simplest job putting it into the unguarded net. On the touchline Klopp did that celebration where he looks like he’s punching a collection of invisible dwarves, one by one.

From there, both teams had their moments. Mane played a pass out to Tsimikas on the left and then met his cross with a good header that travelled just wide, with Emiliano Martinez beaten had it been more accurate. Soon after, Alexander-Arnold hit a cross to Naby Keita eight yards out, but he missed his kick completely, the ball striking his standing leg.

When one considers the goalscorers Liverpool had on the field, had it fallen to one of them…

At the other end, Villa were also testing the defence, Alisson hit a pass straight at Watkins but got away with it, the ball coming too swiftly and unexpectedly, and bouncing off the striker, allowing a second go for the relieved Brazilian. John McGinn hit an excellent cross met by Ings running in, his powerful header travelling over the bar; and a fine one-two between Philippe Coutinho and Digne ended with the Brazilian curling a shot just over the bar. If this was Villa going easy, their league position is an even greater mystery than it seems.