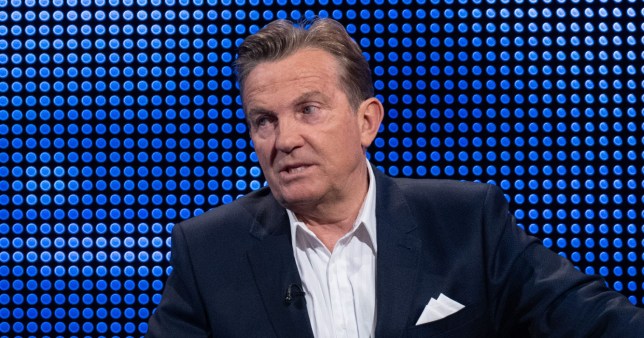 Caption: Bradley Walsh, 61, admits he was told to lose weight or die

Bradley Walsh has revealed that regulations are so tight on The Chase there are lawyers on stand-by to make sure there is no foul play.

The Chase regularly gets accused of being ‘fixed’ by skeptic trolls on social media, when actually there really is no way the game show could be manipulated at all.

So much so there are lawyers on hand to make sure of it.

If Bradley even so much as stumbles on a word while asking the questions, there’s an intervention – especially in the final chase.

‘If there is a slight misread, I am stopped immediately – bang – by the lawyers,’ he told Radio Times.

‘We have the compliance lawyers in the studio all the time.

‘What you have to do is go back to the start of the question, literally on video tape where my mouth opens – or where it’s closed from the previous question – and the question is re-asked. It is stopped to the split second.

‘It means no time is lost for either the contestant or the Chaser.’

The presenter even has to read the questions at a particular speed in the final chase, taking 3.6 to four seconds to put a question to the contestants and chasers.

‘If you’re a contestant and I go “what’s… the capital… of France… “ they’d be dead and buried in thirty seconds,’ he explained.

‘I have to make sure they get up to speed and they’re getting about 18 or 19 questions answered correctly.’

The Chase team also use an independent professional monitoring firm called Beyond Dispute, to monitor the questions that are asked and make sure they are selected at random.

The Chase airs weekdays at 5pm on ITV.