Thomas Frank will take to the ski slopes of Switzerland this week desperate to switch off from the strains of managing in the Premier League.

For all the plaudits for his Brentford side — beating Arsenal and the 3-3 draw with Liverpool stand out — they have mustered just seven points from their last 10 matches, leaving them 18th in the form table.

Only managerless Everton (five) and Watford (four) have performed worse in that period and wins for Newcastle and Norwich over the weekend did little to lift the anxiousness in west London before the league’s winter break. 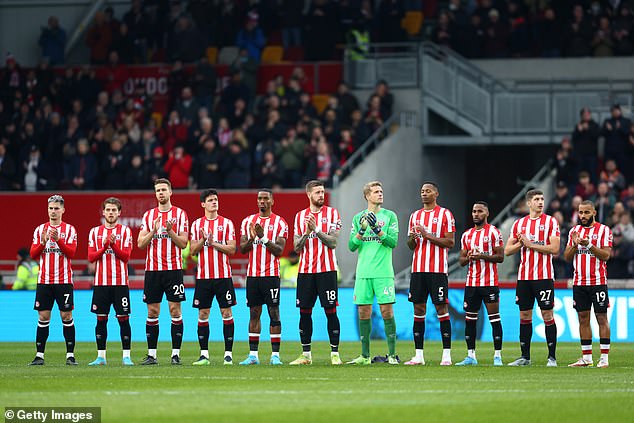 Brentford have taken just 7 points from their last 10 games, leaving them 18th in the form table

Frank is a passionate manager and on Saturday his feelings bubbled over when he angrily confronted, Wolves goalscorer Joao Moutinho and then referee Peter Bankes, at full time.

Bankes brandished a yellow card because Frank was ‘too aggressive’ but the Bees boss then told him he ‘can give a second one as well’. The red came out moments later.

‘I’m not feeling pressure, no,’ Frank said. ‘There is no extra pressure compared to the Championship. Fighting for promotion in the Championship and fighting to finish as high as possible in the Premier League, it is exactly the same.

‘The game was frustrating because of the football gods — they didn’t want it to go our way and we worked so hard.’

To go with the post-match melee and Frank’s red card, the match served up a drone stopping play, two serious head injuries, 19 minutes added time, the referee’s mic pack failing, Wolves having a red card for Toti Gomes overturned by VAR, another seven minutes of added time, three brilliant goals and one more disallowed from the Spurs-bound Adama Traore. 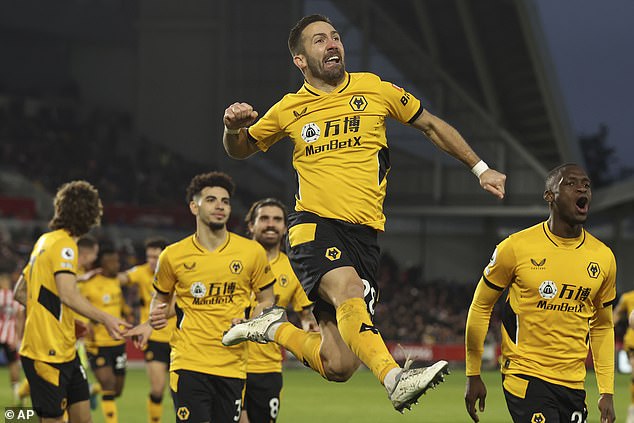 Frank’s side worked hard but they continually trip themselves up in the final third.

Moutinho, and then midfield running mate Ruben Neves, both scored from outside the area, cancelling out a wondrous volley from Ivan Toney, to make it 12 goals conceded in four games for Brentford.

That means it is seven home defeats, the second-worst in the league, and eight points above the relegation zone.

It is also Manchester City next. So, while Frank does not want to concede to nerves, his red at the final whistle showed even the most optimistic personality can feel the pressure.