After a Covid-19 enforced delay, Liverpool and Arsenal finally meet in the Carabao Cup semi-final at Anfield on Thursday night in a match that pitches Jurgen Klopp against a new foe in Gunners manager Mikel Arteta.

Klopp would have missed the game had it gone ahead last week due to his own positive coronavirus test but having fully recovered he comes face to face with Arteta for the first time since their infamous touchline bust-up back in November.

That too was at Anfield and at the time of the game it happened, Arteta’s side had so far produced a valiant display with the score at 0-0. 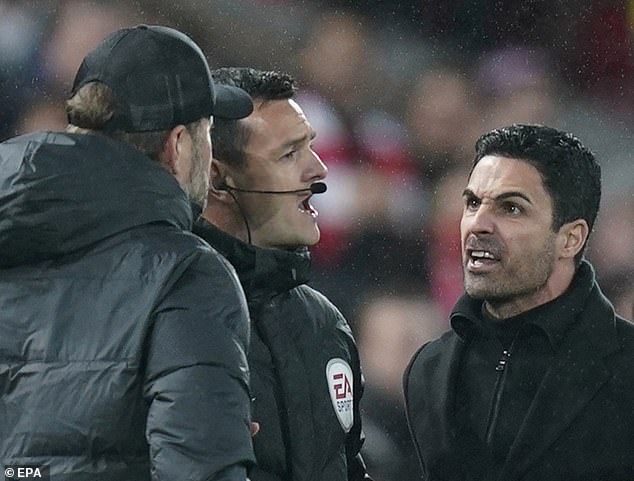 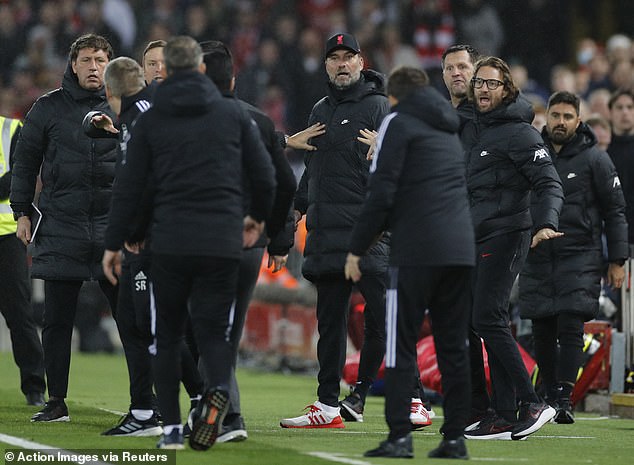 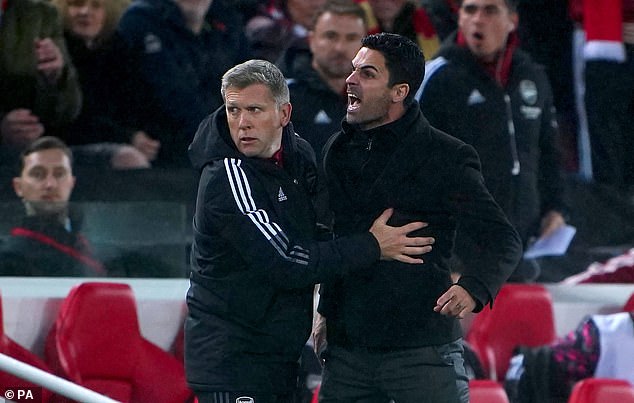 The moment came in the first half after a challenge by Sadio Mane on Takehiro Tomiyasu. Both managers squared up but it was the reaction of Arteta, who needed to be held back, that was particularly striking.

The Spaniard is usually calm and collected but that night at Anfield, he lost his temper with Klopp. Both managers were booked by the referee but unfortunately for Arsenal, the incident whipped up the home crowd into a frenzy – no doubt in part due to Arteta’s ties to rivals Everton.

And the atmosphere galvanised Liverpool, who went on to record a storming 4-0 victory over the Gunners with goals coming from Mane, Diogo Jota, Mohamed Salah and Takumi Minamino.

Arteta was still feisty about the incident after the final whistle.

‘I don’t know (if players like it when I fight on the touchline). It’s who I am. I will react,’ Arteta said.

‘If I have to defend my players I will do it. Maybe you don’t give me motivations to go the other way. It’s part of our character.’ 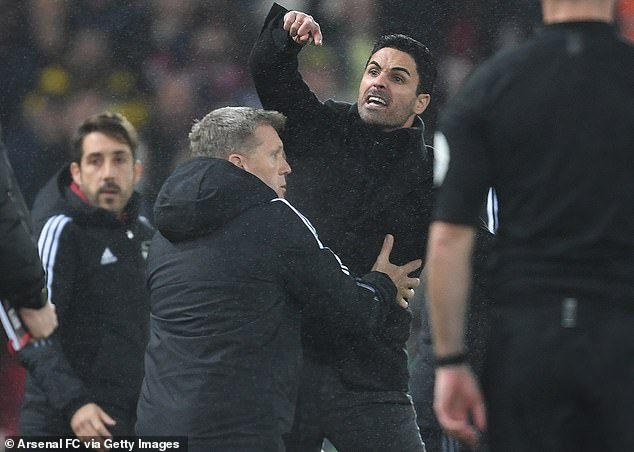 The incident galvanised the Anfield crowd – until then, Arsenal had been the better side 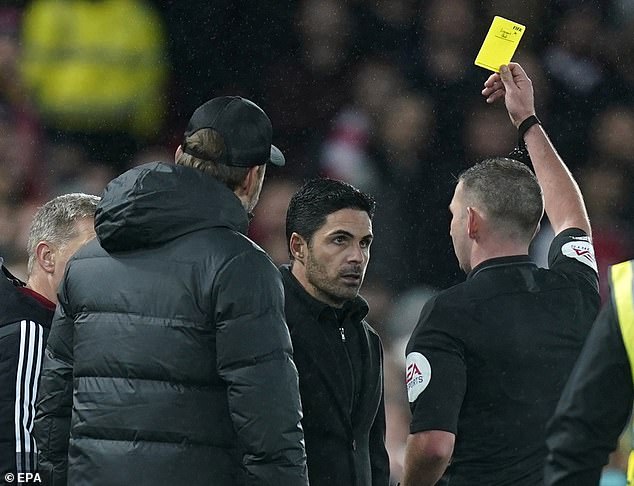 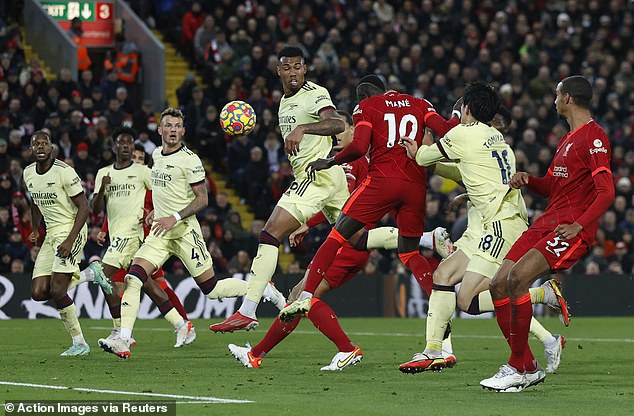 Soon after, Mane headed Liverpool into the lead and they went on to record a 4-0 victory

Klopp, meanwhile, revealed he was incensed because he felt Arsenal were targeting Mane and trying to get him booked.

‘It was a completely clean situation, nothing happened, two players jumped in the air and didn’t touch each other, really, at least not like a foul,’ Klopp said. 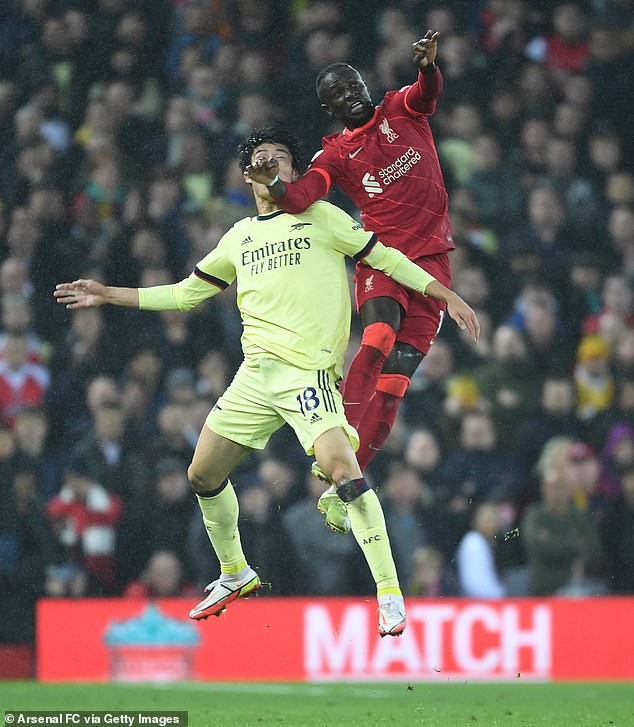 ‘The bench of Arsenal went up and I asked: “What do you want from that?” There was no contact really, but it looked like everybody wanted a red card.

‘I am really sick of these situations, where everybody tries to go for Sadio in these moments. He is a physical player, obviously, he does make hard fouls.

‘We had to take Sadio off against Atletico [Madrid in the Champions League] because they wanted him to get a yellow card.

‘The referee did really well in that situation – I deserved a yellow card. It wasn’t OK and that is what I said. It just happened in the moment.’

The Klopp v Arteta rivalry will be an interesting sub-plot on Thursday’s match. It is not the first time the German has got under the skin of an opposing manager – Diego Simeone, Frank Lampard, Sam Allardyce and Tony Pulis, among others, can attest to that. 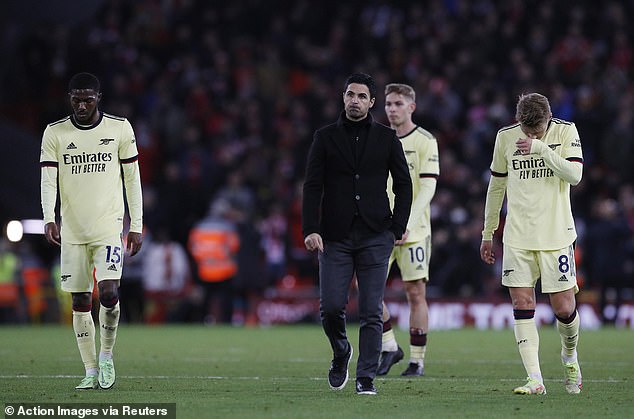 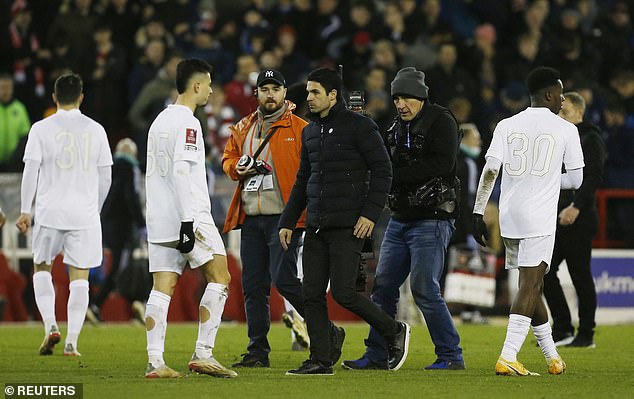 Mane won’t be involved in Thursday’s encounter as he is representing Senegal at the Africa Cup of Nations. But it is expected Klopp will name a strong side for the first-leg encounter with a place in the Wembley final within touching distance.

Whoever advances will face Chelsea, who dispatched Tottenham with ease in both of their semi-final legs.

And for Arsenal, the meaning of the semi-final has gone up a level after being embarrassed in the FA Cup third round by Nottingham Forest last weekend.

It’s a perfect time for Klopp to add insult to injury by snuffing out Arsenal’s last chance of a trophy this season.