Carlton have been given fresh hope star forward Charlie Curnow will make his long-awaited return from a horror run of knee injuries before the end of the AFL season.

Curnow, who has not played a senior match in more than two years, took a significant step on the comeback trail when he got through three quarters of a scratch match involving players from four clubs on Sunday.

The 24-year-old had been eyeing a VFL comeback for the Blues against Collingwood, but that fixture was postponed because of Victoria’s COVID-19 lockdown. 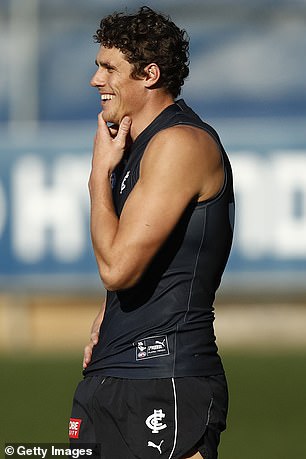 “He was a little bit rusty but he actually looked really good at ground level, his ground-ball takes were really clean,” Carlton coach David Teague said.

“He did go for one big grab late in the game and he didn’t quite mark it, but it was exciting to see him launching at the ball the way we know Charlie can.

“I think he’ll get a lot of confidence out of that and now we’ll need to see how he pulls up, but it was a pleasing outing for him.”

Teague said Curnow’s workload in Sunday’s scratch match was up to the level the Blues would have liked to see from him in the planned VFL comeback.

“We got exactly what we wanted out of it, so that will class as what we planned to do this week,” Teague said.

“We’ll reassess going forward now. It’s a little bit on how he performs now and how he pulls up.

“His plan is to work his way into the senior team and from a conditioning point of view he’ll be able to do that.

“It will then come down to form and if he continues to grow, his form today was pretty solid, so we’ve got a lot of confidence and belief in big Charlie.”

Curnow hasn’t played an AFL match hurting the medial ligament in his right knee during a win over Fremantle in June 2019.

Since then, he has endured a dislocation, fracture and hairline stress response to the same knee.

Carlton are pinning their long-term hopes on Curnow and Harry McKay firing in a dangerous attacking partnership.

Coleman Medal leader McKay kicked four goals in Sunday’s win over Collingwood to become the first Blue in a decade to reach a half-century in a season.