Here is Sportsmail’s live blog for updates on the FA Cup final clash between Chelsea and Liverpool at Wembley Stadium.

Wes Morgan: ‘Give me trophies over finishing in the top four any day!’

Wes Morgan was the man who lifted the trophy in last year’s final, as Leicester won 1-0 against Chelsea courtesy of Youri Tielemans’s stunning strike.

The now retired defender spoke to Sportsmail this week about the final, his time at Leicester and his post-playing hopes.

‘I remember all the emotions from that day and can picture the moment when it happened…Youri getting the ball out of his feet and scoring, the ball going into the top corner.’

The former Leicester captain speaks to Sportsmail about winning the FA Cup, preferring trophies over a top-four finish and his hopes to increase the diversity in football boardrooms.

Chelsea are the first side to qualify for three consecutive FA Cup finals since Arsenal between 2001 and 2003.

However, after losing in both 2020 against Arsenal and 2021 against Leicester, the Blues are looking to avoid becoming the first side to suffer defeat in three finals in a row. 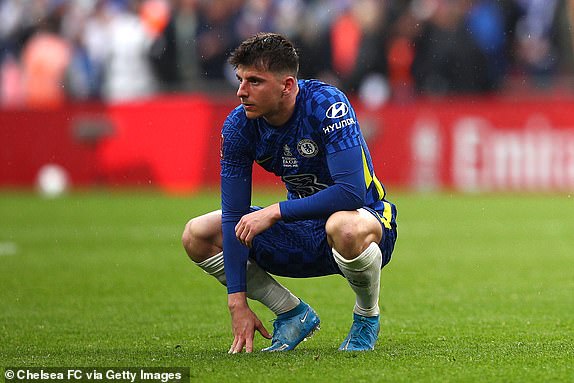 Keown: This FA Cup final has all the makings of an epic battle between two great tacticians and their teams

Sportsmail columnist and three-time FA Cup winner Martin Keown has had his say on today’s final.

He believes Chelsea could punish Liverpool in the same way they did Manchester City in the Champions League final last season.

MARTIN KEOWN, FA CUP: Chelsea can punish Liverpool like they did City

Chelsea and Liverpool have faced each other three times this season and they’ve all ended in draws after 90 minutes, with Jurgen Klopp’s side edging the Carabao Cup final 11-10 on penalties.

There may be a feeling of Déjà vu at Wembley this afternoon, as Chelsea and Liverpool also met in this season’s League Cup final in February.

The Reds won on penalties that day, following a goalless draw in 120 minutes. Goalkeeper Caoimhin Kelleher was the hero, as he scored from the spot and then his opposite number Kepa Arrizabalaga blazed his effort over the bar.

It is only the second time that the same two sides will contest both the League Cup and FA Cup final in the same campaign. The previous occasion was 1992-93, when Arsenal beat Sheffield Wednesday in both finals. 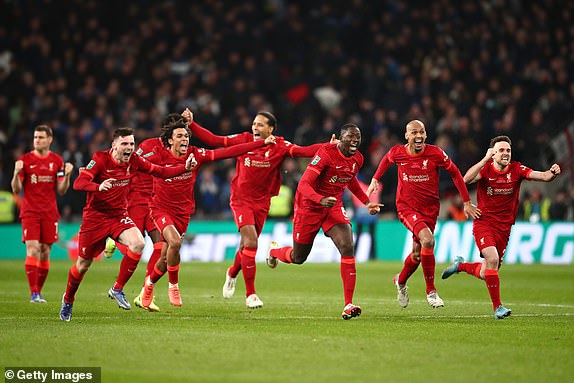 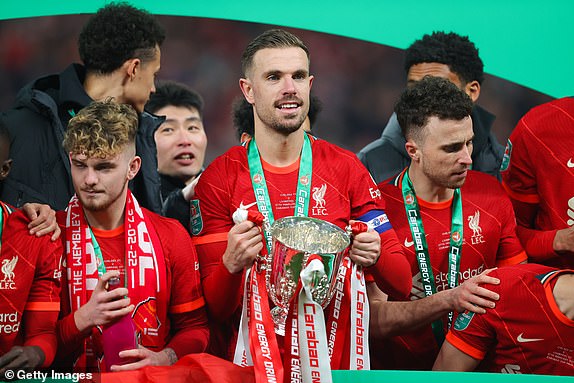 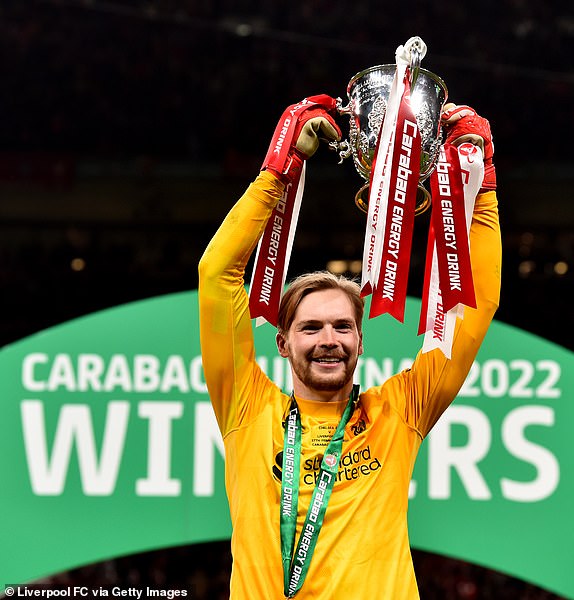 For the very first time, the men’s and women’s FA Cup finals are being played on the same weekend.

After Chelsea and Liverpool go head-to-head today, Chelsea and Manchester City Women will be at Wembley tomorrow.

Sportsmail takes a look at the key players and battles, with insight from Sky Sports pundit and England legend Karen Carney, ahead of Sunday’s showdown..

Women’s Super League champions Chelsea face Manchester City in this weekend’s FA Cup final with a record crowd set to be in attendance at Wembley.

The calm before the storm

Liverpool’s players were on the Wembley pitch a couple of hours ago as they got a feel for their surroundings.

Taking in our surroundings ahead of the #EmiratesFACup final! 🚶‍♂️ pic.twitter.com/2wobehM0m9

Wembley Stadium has suspended a firm supplying staff for the final after a Sportsmail investigation exposed alarming security lapses.

The FA launched an urgent inquiry after our undercover operation revealed safety failures at three recent sell-out events at the national stadium.

INVESTIGATION BY ISAAN KHAN: The FA launched an urgent inquiry after our undercover operation revealed safety failures at three recent sell-out events at the national stadium.

The perfect day for it!

The FA Cup final is always one of the best days in the English football calendar and the weather is certainly matching the occasion today.

Sunshine glistens over Wembley as fans continue to arrive. 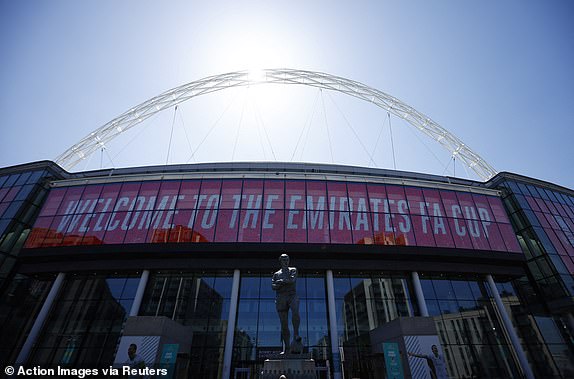 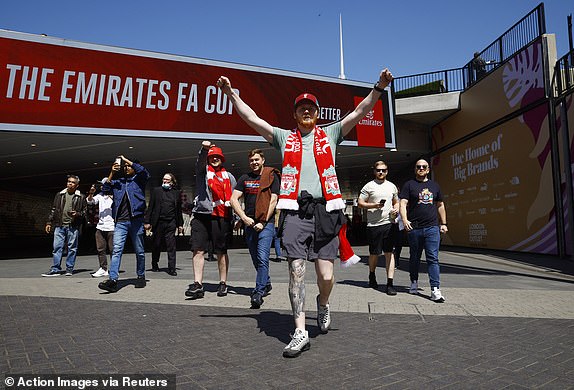 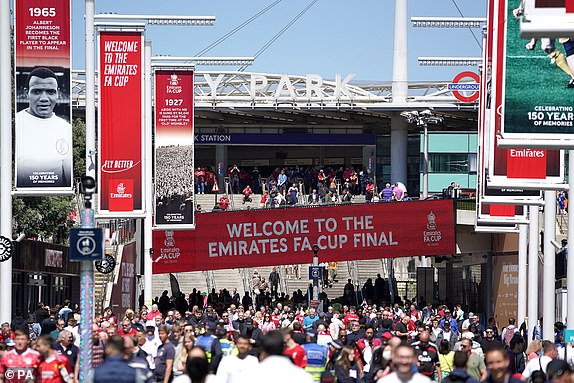 Whoever triumphs will become the first ever German boss to lift the trophy.

Tuchel has faced Klopp more than any other manager in his career (18 games), but has only beaten him on three previous occasions. 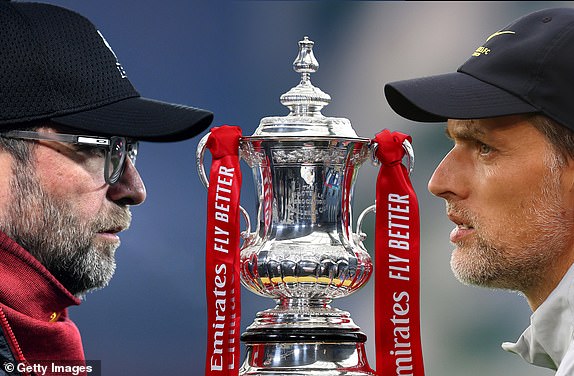 Today is the second time that Liverpool and Chelsea will meet in the FA Cup final, after the Blues won 2-1 against the Reds at Wembley in 2012 thanks to goals from Ramires and Didier Drogba.

Sportsmail’s Isabel Baldwin took a look at what the players from the two sides that day are doing now.

Where are Liverpool and Chelsea’s 2012 FA Cup final players now?

From tattoo artists to lip sync battle extraordinaires, Liverpool and Chelsea’s stars have discovered ways to keep themselves busy. Here Sportsmail takes a look at where the 2012 sides are now.

It’s still four hours until kick-off, but fans from both clubs have already arrived on Wembley Way to soak up the early atmosphere. 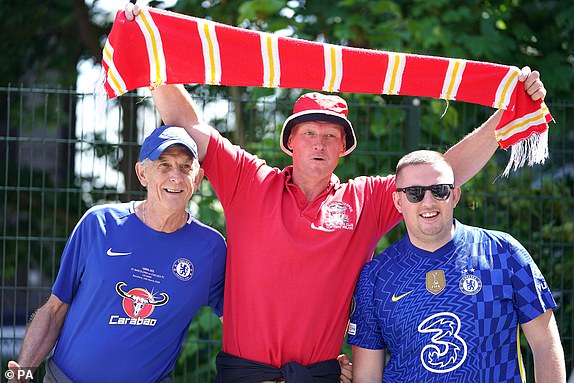 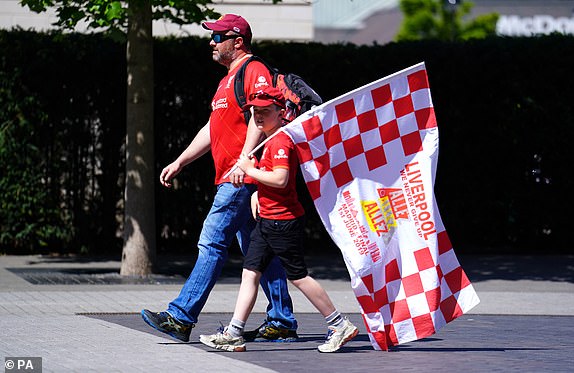 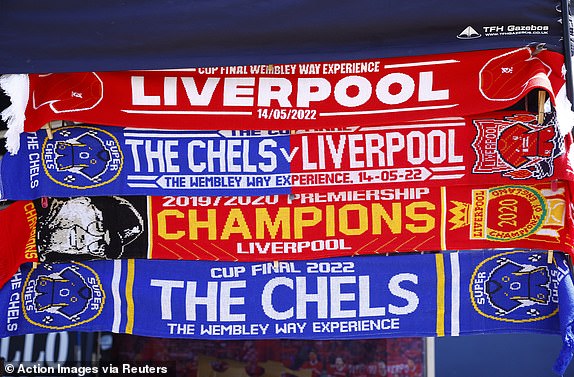 We’ve had plenty of build up to the game over the last few days on Sportsmail and we’ll be sharing a range of pieces throughout the afternoon.

First up, some predictions. We asked six of our Sportsmail experts to call the outcome of the final. Here’s what they said…

Liverpool face Chelsea in a crunch FA Cup final at Wembley on Saturday, in a repeat of the League Cup final. Sportsmail’s experts make their predictions ahead of the tournament showpiece.

We began over nine months ago…

Teams from levels 10, 9 and 8 of the English pyramid kicked things off in the extra preliminary round.

In total, 729 teams have competed in this year’s competition. Now only two remain.

It’s FA Cup final day! The world’s oldest cup competition is celebrating its 150th anniversary this year and we have reached the showpiece at Wembley.

Chelsea and Liverpool will battle it out to lift the famous trophy – their second meeting under the arch this season after the Reds beat the Blues in the Carabao Cup final in February.

Join us throughout the afternoon and into the evening as we’ll have all the build up to the game and then coverage of what should be a thrilling fixture. 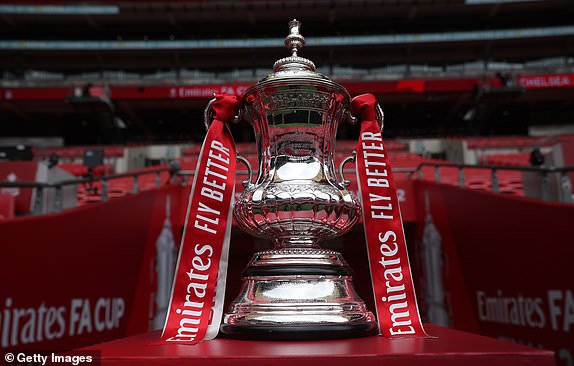