Christine Quinn put on an enticing display on Saturday afternoon as she cooled down with an ice cream bar.

The 32-year-old Selling Sunset star was seen flashing leg in a colorful crochet mini dress while picking up a frozen delight from the Pink Dot in West Hollywood.

After some final errands, the blonde beauty headed home to pack for a luxury Italian vacation on the Amalfi coast where she was joined by her husband Christian Richard and their two-month old son Christian. 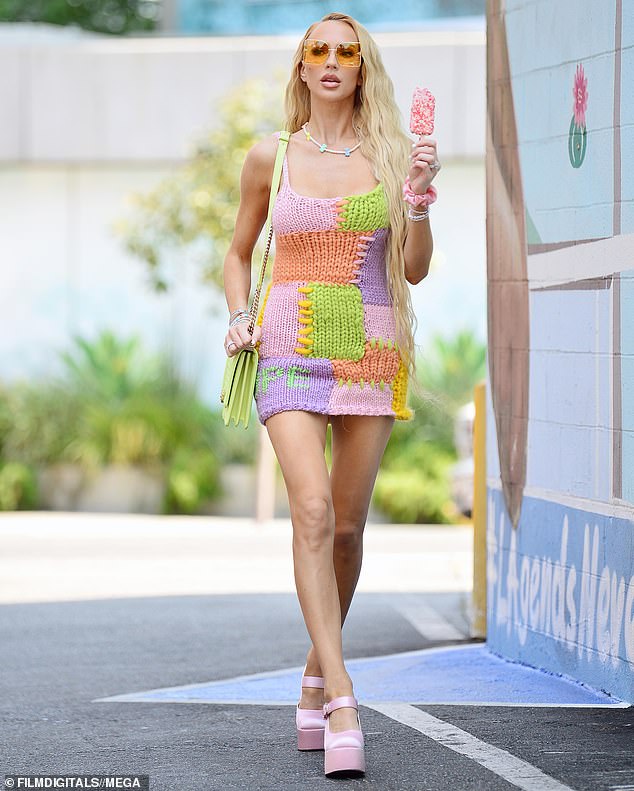 Sweet sight: Christine Quinn, 32, cools things down with an ice cream bar while out and about in West Hollywood

She coordinated the knitted frock to both her pink ice cream and her accessories as she strutted her stuff in blush colored satin platforms.

Christine toted along a key lime Chanel bag and continued to lean into color by way of her yellow framed sunglasses and a playful beaded necklace.

Though she left her platinum tresses down in mermaid style waves, she affixed a pink colored scrunchie to her wrist to combat the hot LA day. 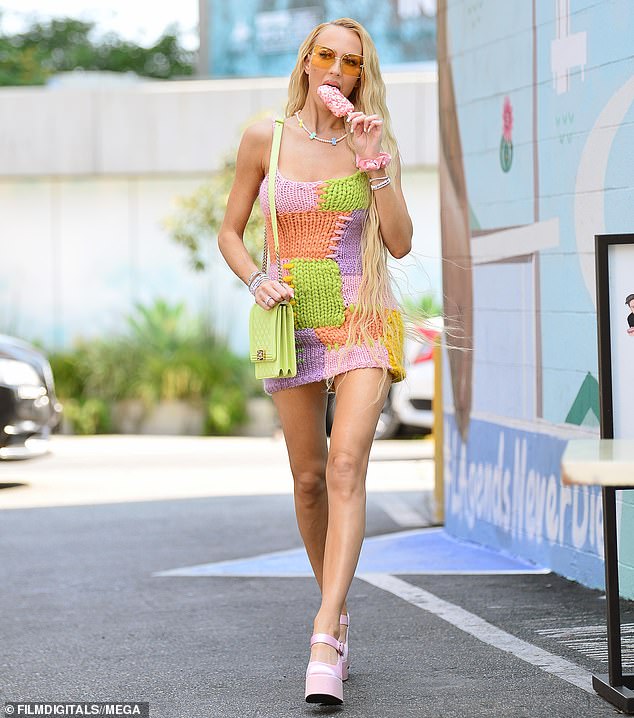 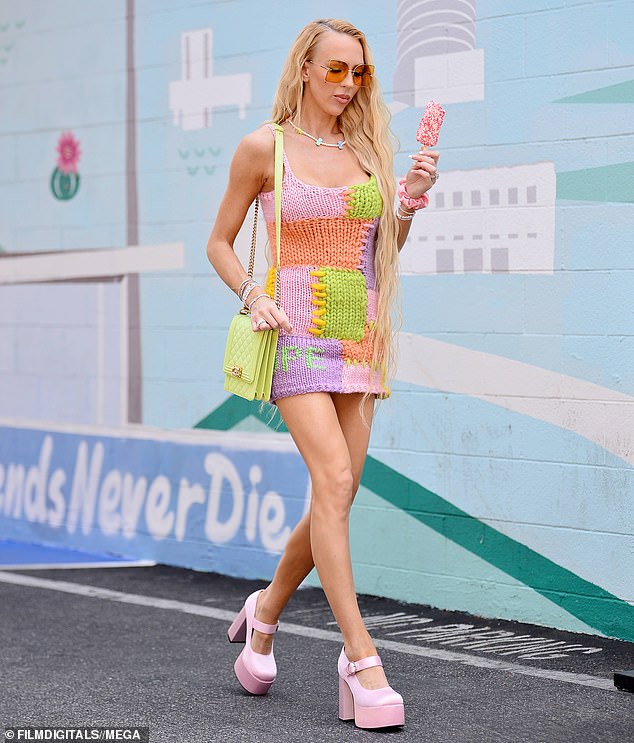 Christine made her way through the parking lot before she hopped into her Lamborghini and headed home.

And she continued to take her luxury lifestyle overseas on Sunday as she shared snaps from a picturesque Amalfi vacation — her first one as a mom.

She and her tech entrepreneur husband welcomed their first child together on May 15, and in a two-month tribute post she got candid about the labor while joking: ‘You made an extremely dramatic entrance, just like your mommy.’

Quinn cradled the newborn while wearing silky Louis Vuitton pajamas, and revealed that she and the baby were ‘lucky to be alive’ after undergoing an emergency C-section.

‘Baby C umbilical cord was wrapped around his neck. Baby C was seconds away from not making it,’ she said in excerpt after sharing that both she and the newborn’s heart rates plummeted. 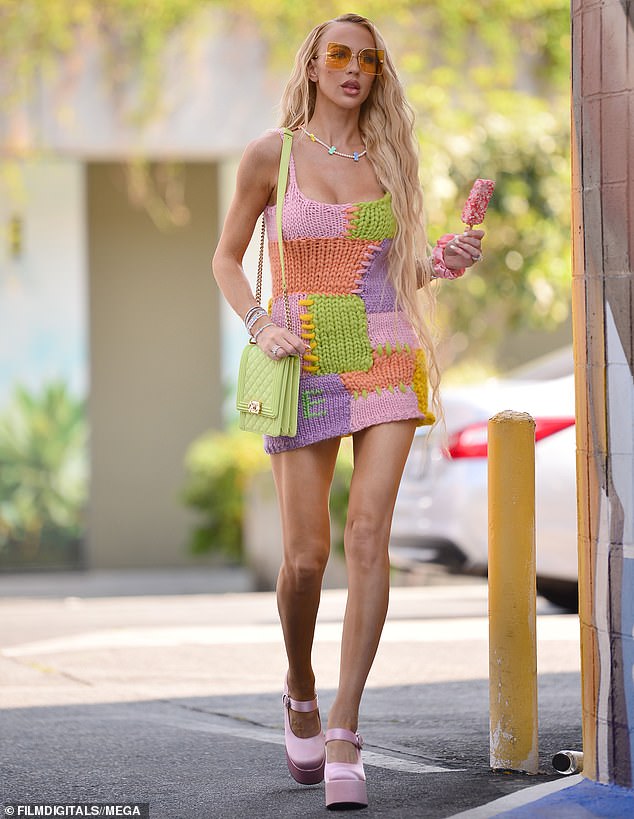 Always bold: Christine turned heads as she sauntered through the parking lot with her statuesque legs on display

‘The surgeons didn’t even have time to count their tools before stitching me up as I was flatlining,’ she shared in the post, adding that doctors had to run her through an X-ray machine to make sure there was no foreign matter left insider of her.

The brazen beauty continued to say that she had to ‘relive the trauma’ while filming season four of the hit Netflix show which is currently in production.

Though she had previously said she was considering giving birth on camera while citing the likes of Khloe Kardashian in her caption (she did not end up doing so), she called it ‘difficult’ to allow the ‘very raw, personal moments of [her] life’ to be ‘captured on camera.’

But despite her candid post her on-screen rival Chrishell Stause recently shared that motherhood did not really change ‘much’ about Christine, who has quite the reputation for drama on the show.

‘I don’t think that changed much,’ Chrishell told People, revealing they had believed things would chill out once she gave birth. ‘I think that a lot of us thought that, but no, that’s not the case,’ she added. 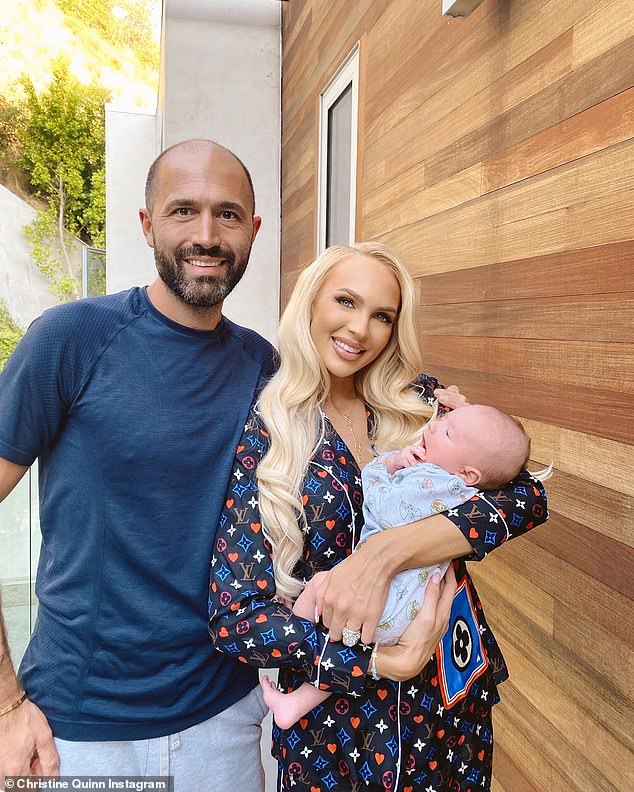 Mom life: In her two month tribute post to ‘Baby C’ she shared that he entered the world in an ‘extremely dramatic’ way just like herself