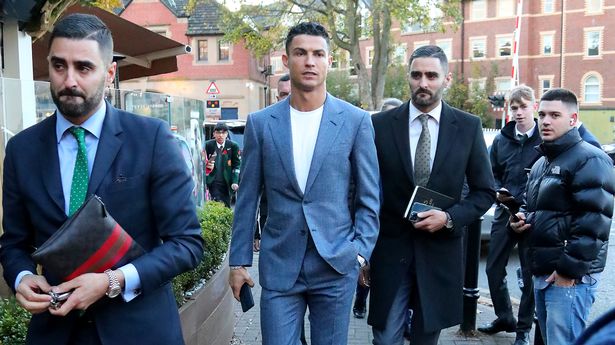 Manchester United star Cristiano Ronaldo and his family are being protected by twins who served as soldiers with an elite special forces unit in Afghanistan.

After leaving the forces brothers Sergio and Jorge Ramalheiro became part of a Portuguese police unit guarding politicians and judges.

Now Portuguese celeb magazine Flash has said the twins, part of a set of triplets, have been hired by Manchester United star Ronaldo.

A third brother, Alexandre, is understood to be working as a police officer.

“They are capable of mixing with the crowd but they are quick to think, see and act at the right moment.”

The twins hail from Ansiao near the city of Pombal, a two-hour drive north of Lisbon.

Father of four Cristiano Ronaldo being followed by his protectors
(

They joined the army straight from school and ended up in a special forces unit called the Commandos, who were created in Angola in 1962.

It is believed Portuguese international Ronaldo, 36, has round-the-clock protection.

In the past the ex Real Madrid and Juventus striker has been looked after by a former MMA fighter and an ex-elite paratrooper.

Former paratrooper Nuno Marecos helped keep the footballer star safe when he was at Real Madrid.

And ex MMA fighter Goncalo Salgado was also pictured keeping watch on the footballer at the 2018 Champions League final in Kiev.

Father of four Cristiano and his partner Georgina Rodriguez, 24, who live in Cheshire, announced last month they are expecting twins.