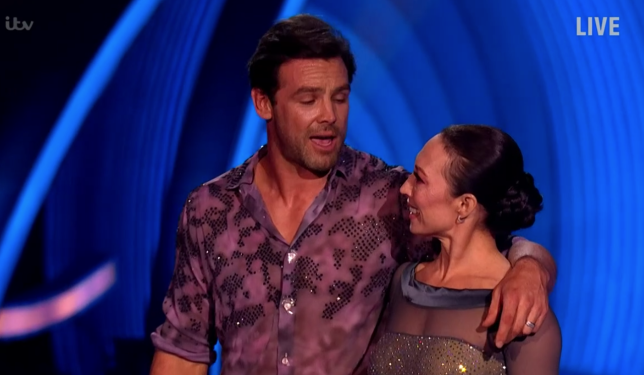 Ben was eliminated ahead of Ria Hebden (Picture: ITV)

Dancing On Ice was back tonight but unfortunately, it was time for one star to leave, with Ben Foden becoming the first to exit the competition.

The ITV series kicked off with a bang last weekend, with fans quickly becoming hooked by the ‘greatest show on ice.’

Six more celebrities were hoping to make it through to another week of the competition.

Liberty Poole, Regan Gascoigne, Connor Ball, Stef Reid and Ben performed for the first time, as they hoped to avoid the skate-off.

Rachel Stevens went through automatically after having to miss her debut skate due to injury.

Ria Hebden found herself in the bottom two following week one and was joined tonight by the rugby star.

However, after a tense skate-off, with both couples performing new routines, it was Ben who was eliminated.

The judges all decided to vote for Ria and her partner Lukasz Rozycki, meaning they sailed through to Movie Week.

Ashley Banjo said: ‘Well done to both of you, skate offs are never easy, I felt this routine had more elements,’ before going with Ria.