Ncuti Gatwa has revealed his nerves at speaking with Doctor Who stars Jodie Whittaker and David Tennant after landing the role of the Time Lord.

It was announced on Sunday that the 29-year-old will become the 14th Doctor on the popular sci-fi show, after Whittaker announced last July she will be leaving the role this autumn.

Thanking his friends and family for their support in the days since the announcement, the rising star also sent his praise to Jodie and David in the sweet Instagram post. 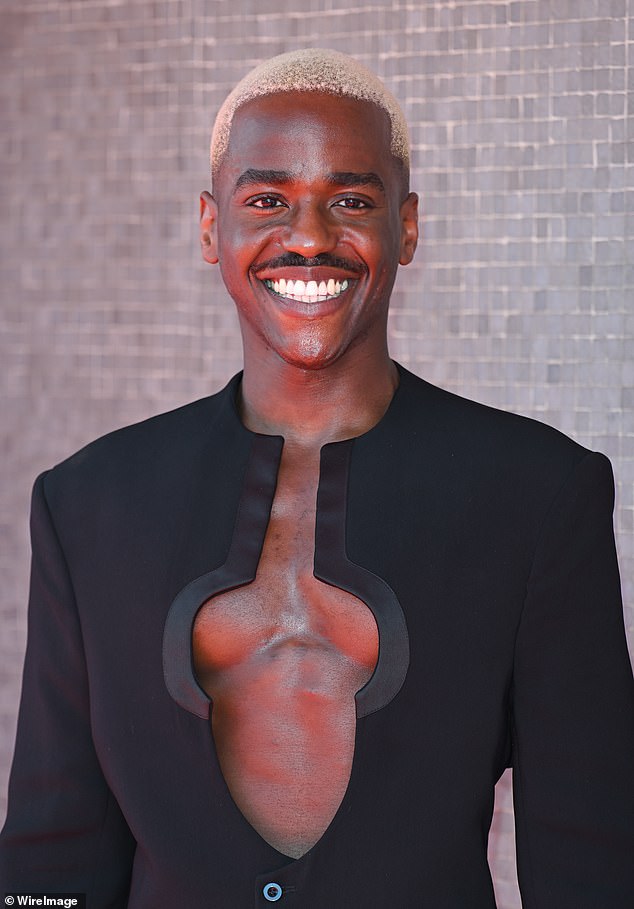 New Doctor in the house: Ncuti Gatwa has revealed his nerves at speaking with Doctor Who stars Jodie Whittaker and David Tennant after landing the role of the Time Lord

Just hours after the Doctor Who announcement, Ncuti attended the Virgin Media British Academy Television Awards at the Royal Festival Hall on Sunday, where he was  nominated for Male Performance in a Comedy Programme for his role as Eric in Sex Education.

Ncuti shared snaps from his big night on Instagram on Wednesday, and told his followers: ‘There are a lot of thank you’s in this caption so please excuse the cringe. But mans feeling hella grateful at the moment….’

After thanking BAFTA for supporting his hit show Sex Education and for his third nomination in a row, the actor turned his attentions to the Time Lords.

‘The Doctor herself, Jodie Whittaker and Mr David Tennant for your beautiful words of support and encouragement on BAFTA day,’ Ncuti wrote. 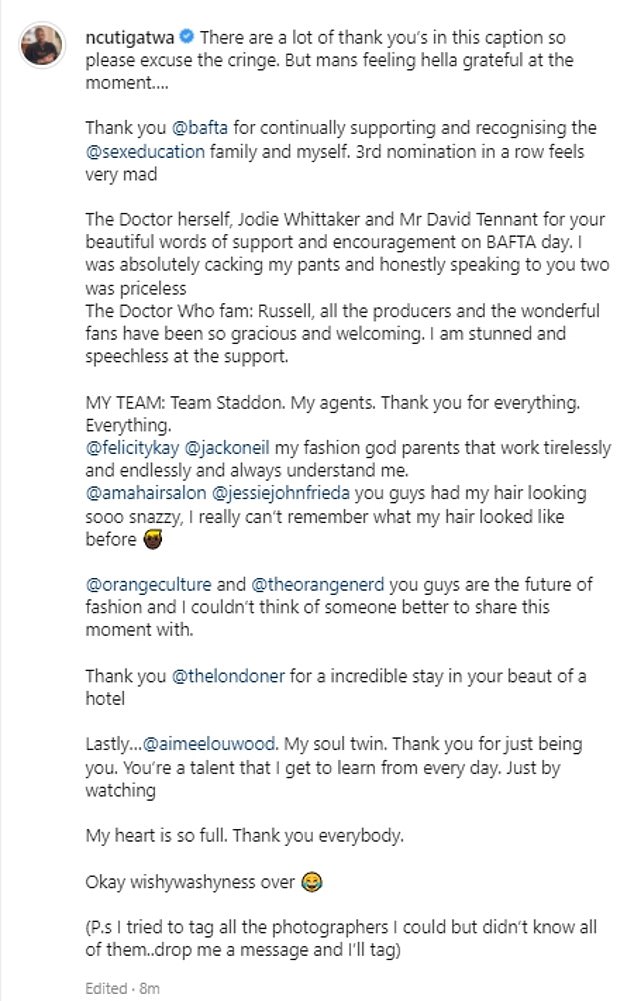 ‘Hella grateful’: Thanking his friends and family for their support in the days since the announcement, the star also sent his praise to Jodie and David in a sweet Instagram post

‘I was absolutely cacking my pants and honestly speaking to you two was priceless.’

He also thanked Doctor Who’s returning showrunner Russell T Davies, adding: ‘The Doctor Who fam: Russell, all the producers and the wonderful fans have been so gracious and welcoming. I am stunned and speechless at the support.’

The grateful star also sent his thanks to his team, ‘my fashion god parents. BAFTA glam squad and ‘my soul twin,’ Sex Education co-star Aimee Lou Wood who he attended the BAFTA TV Awards with.

‘My heart is so full. Thank you everybody. Okay wishywashyness over,’ the actor ended his post. 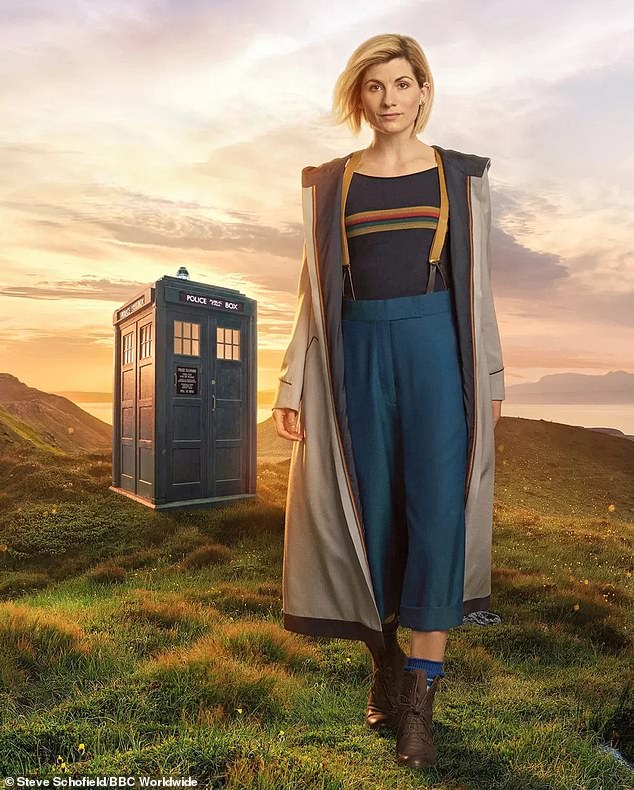 History maker: The 29-year-old will become the 14th Doctor on the popular BBC show, after Whittaker announced last July she will be leaving the role after five years

It comes after former Doctor Sylvester McCoy also took to social media to offer his well-wishes to Ncuti in a video message posted on Twitter.

The Scottish actor, who played the Seventh Doctor from 1987 to 1980, said: ‘Welcome to our unique club, the Doctor Who club you are very welcome, and we’d be delighted to watch you take on the daleks, cybermen, weeping angels and the critics! We all have to do that when we all took over,

‘I wish you well I wish you everything you wish for yourself in the TARDIS I hope you have great adventures, I know you will I had, all the best mate, all the best I look forward to meeting you someday, by another Scot!’ 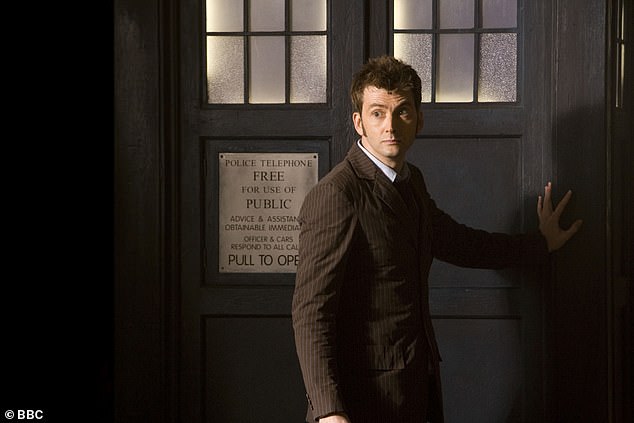 Icon: Ncuti reflected on meeting David Tennant, who played the Tenth Doctor from 2005 to 2009, before reprising the role in 2013 for the 50th Anniversary Special

Ncuti later took to his Instagram Stories to respond to Sylvester’s message, saying: ‘Thank you, thank you, thank you so much for your beautiful message it means the absolute world especially coming from a fellow Scot.

‘I am so looking forward to facing all of those foes especially the last one that you mentioned and the support from you and all the other doctors, has just filled me with the strength that I will be able to do that.

‘Thank you so much for welcoming me into the family, it means the world, Sylvester you’re a gentleman all the best.’

Ncuti’s casting has been met with huge excitement by fans after the surprise announcement on Sunday afternoon. 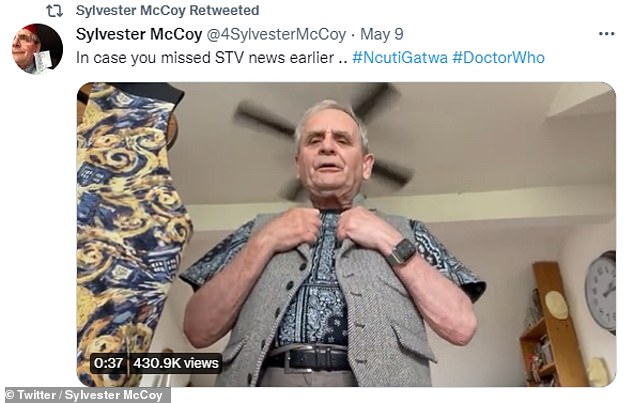 ‘I hope you have great adventures’: It comes after former Doctor Sylvester McCoy also took to social media to offer his well-wishes to Ncuti in a video message posted on Twitter

Gatwa is the first black actor to take on the leading role as The Doctor, after Jodie made history as the first permanent female Time Lord in 2017.

Jo Martin played the first black incarnation of the Time Lord in a January 2020 episode, Future of the Judoon, as Ruth Clayton, but Gatwa has become the first black Doctor to be cast as the series lead.

Gatwa admitted that he has kept his casting in Doctor Who under wraps since February and praised the popular series for making people feel ‘seen’.

In his first interview since the announcement, he said: ‘I’ve known since February. It’s been tricky keeping this under wraps because I’ve got a very big mouth. We did it.

‘It feels amazing, this role is an institution and it’s so iconic and means so much to so many people, including myself.

‘It makes everyone feel seen. I’m very grateful to have the baton handed over and I’m going to try and do my best.’

Meanwhile, Davies said the casting team thought they had already chosen someone for the role of The Doctor when Gatwa came in and ‘stole’ the job.

‘It was talent. He was the very last one, we thought we had someone and then in he came in and stole it,’ Davies said.

‘Genuinely loved Sex Education and loved his work, didn’t quite know what we were going to get. I am properly thrilled.’ 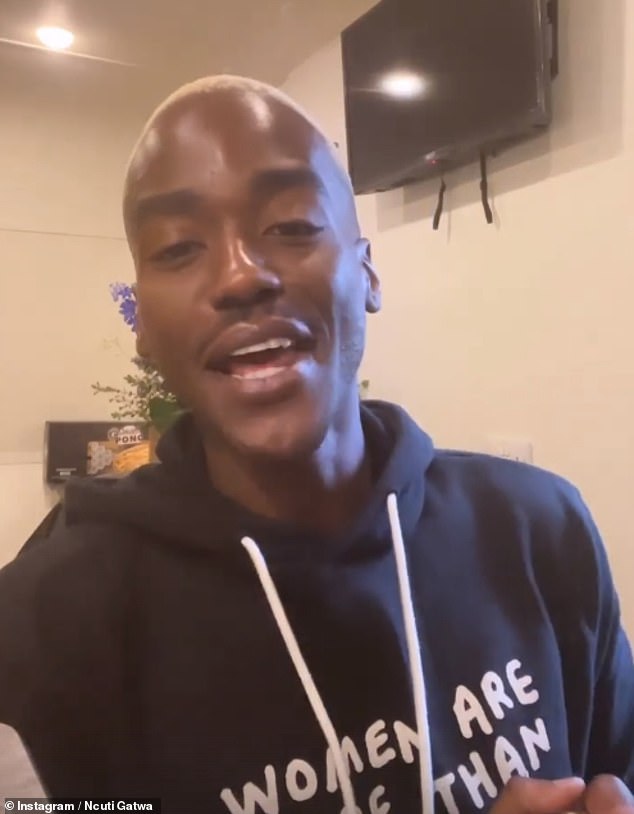 Happy: Ncuti later took to his Instagram Stories to respond to Sylvester’s message, saying it meant the ‘absolute world’