Kostas Tsimikas sent Edouard Mendy the wrong way and so began the charge of the Red Brigade, a group of men delirious with their latest success.

At the back of the posse, though, your eye was drawn to Virgil van Dijk. Plenty of his team-mates had gone from standing to sprinting in the blink of an eye but Liverpool’s No 4 could do nothing more than hobble, looking as if he was trying to negotiate a shingly beach bare-footed.

Rare are the days when Van Dijk doesn’t finish a game he has started. He’s made 179 appearances for Liverpool since his £75million move from Southampton and only four times he had failed to complete the game. 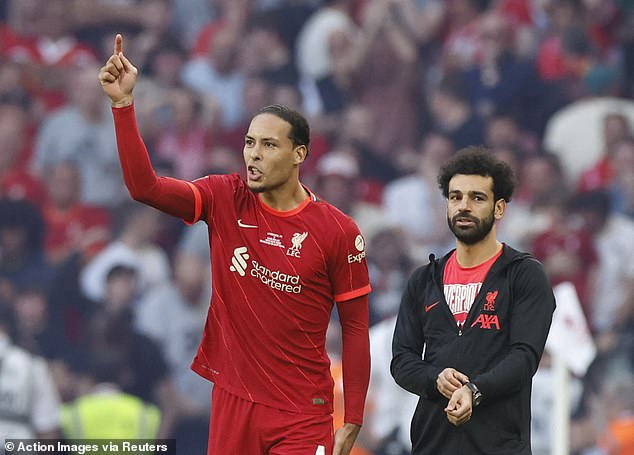 Two of those were in inconsequential League Cup ties against Lincoln and Arsenal in September 2020, the others were against his old club in September 2018, when he cracked a rib, and then at Goodison Park in October 2020 when he suffered that catastrophic knee injury.

So the very fact Jurgen Klopp and Van Dijk, Master and Commander of Liverpool’s defence, decided he could not continue in the FA Cup Final, as extra-time beckoned, had alarm bells ringing loudly. With everything on the line, how could he withdraw from the action?

But Van Dijk wasn’t the main reason those alarm bells had been set off. That moment had come midway through the first half when Mohamed Salah, another man for whom the phrase “durable” could have been invented, went down grimacing and signalled to the bench.

Many might have felt this was like two bricks being removed from a Jenga tower and, suddenly, the absence of two big names, on a huge day, would see Liverpool’s dreams of completing a clean sweep come crashing down. 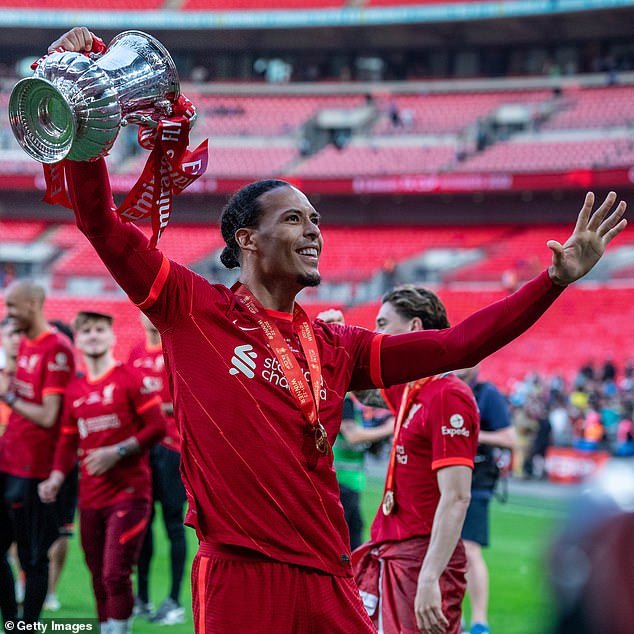 The pursuit of immortality is coming draining, emotionally and physically. Liverpool had already lost Fabinho to a hamstring issue at Villa Park on Tuesday night and another two injuries almost removed the team’s spine completely.

When you added into the fact Andrew Robertson came off in extra-time, unable to give anymore, it was inevitable questions would follow about how much petrol was left in this particular tank. To have lost the penalty shootout, as well as losing key players, could have utterly demoralising.

‘We had to change Mo early and that was my decision, a precaution,’ Klopp insisted. ‘He felt something, he said he could carry on, but they rarely get better in a game. Virj felt something too. It was clear he had to go off after 90 minutes.

‘But being able to bring on Diogo Jota and Joel Matip is the best situation I have ever been in as a coach. I have spoken to both (Salah and van Dijk) and both are ok. Not a big thing. Both will be fine but we have to see.’

Fate handed another substitute, Tsimikas, the opportunity win the FA Cup for Liverpool for the first time since 2006 and it seems unthinkable that he will not start at Southampton on Tuesday, the next hurdle on this demanding course they must negotiate. 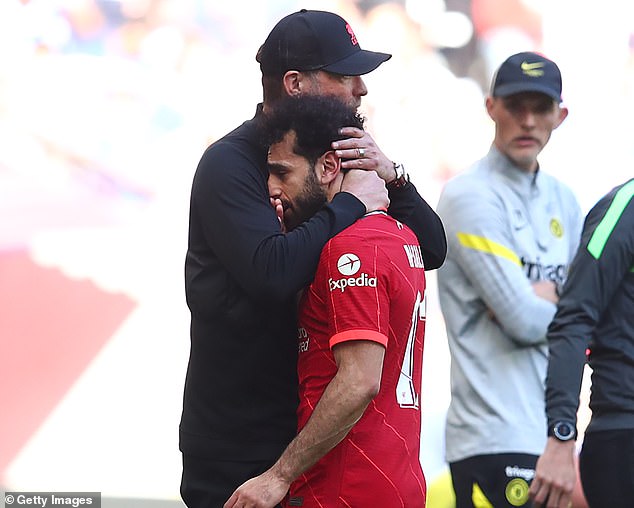 ‘I have no clue in this moment who I can line up,’ Klopp gasped. ‘The quadruple is on, if you want, but it’s also off because of the situation. That’s not important in this moment. We won both domestic cups and that is really special.’

It is but it could get even better. Of the pair, Salah was the most upbeat as he breezed out of the stadium. He had a smile on his face and was eager to assuage any fears that his prospects of lining up against Real Madrid in Paris a week on Saturday had been harmed.

‘Of course, of course!’ he replied when asked if everything was ok. ‘It not a problem.’

Van Dijk also walked out the stadium, seemingly free of any niggling pains, but he was a little more circumspect, telling BBC Sport: ‘We’re going to check it out. I felt in the first half when I sprinted, I felt a twinge behind my knee, I played on. In the end, I can’t risk it for the team.’

Nor should he. Events at West Ham on Sunday afternoon may mean the Premier League title is taken all but out of their grasp and, in that case, the final week of the domestic campaign should be about self-preservation and recuperation for this outstanding team.

If they were to gloss everything by winning a seventh Champions League in Paris, it would be a staggering conclusion to all that has gone before. The priority must be having Salah and Van Dijk ready to tackle Madrid: that game matters more than anything else.