He’s on the road to recovery after suffering a dislocated pelvis and three slipped disks in his back in March.

And on Thursday, Eamonn Holmes, 61, put on a very dapper display as he attended the World Premiere of ROBBO: The Bryan Robson Story at HOME Cinema, in Manchester, alongside his son, Jack, 19.

The presenter looked to be in high spirits as he stepped out on the red carpet with his walking stick as he continues to gain strength amid his health woes. 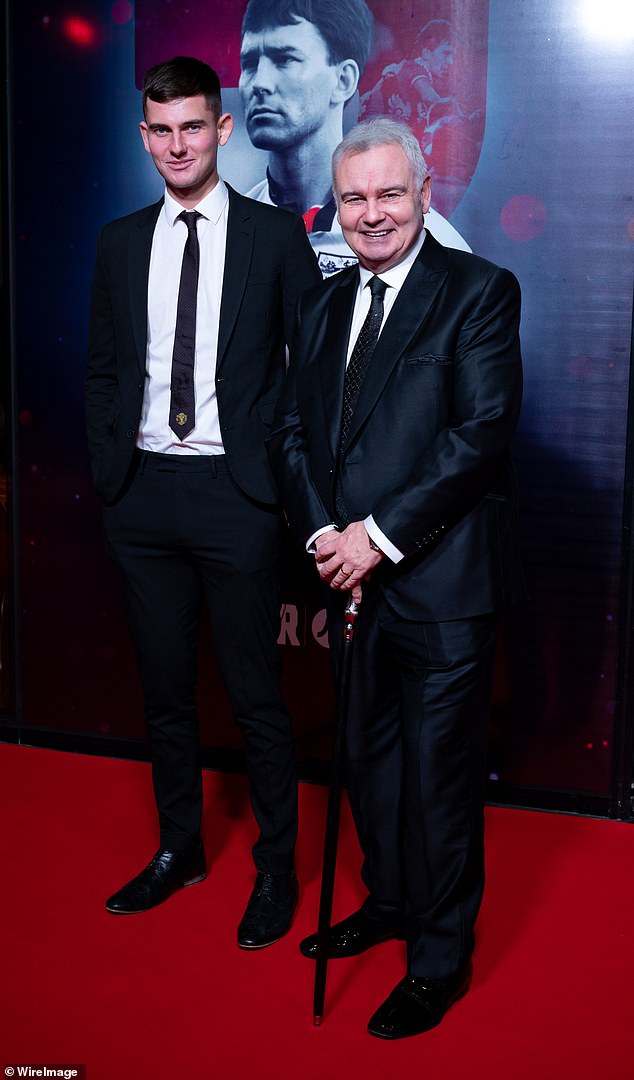 Father and son: Eamonn Holmes, 61, put on a dapper display and posed with a cane amid health woes as he and son, Jack, 19 attended the ROBBO premiere in Manchester on Thursday 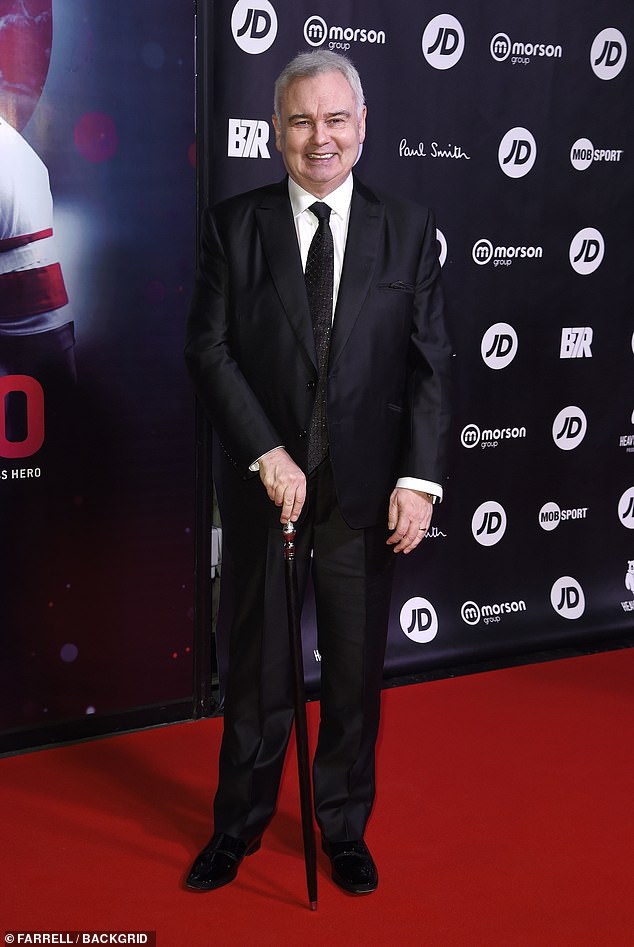 All smiles: Eamonn wore a black two-piece suit to the event that he teamed with a crisp white shirt and jacquard tonal tie

Eamonn wore a black two-piece suit to the event that he teamed with a crisp white shirt and jacquard tonal tie.

He flashed a smile for the cameras as he posed with his walking stick on the red carpet.

Later, he could be seen as he stopped for photos alongside his son, Jack, who largely stays out of the public eye. 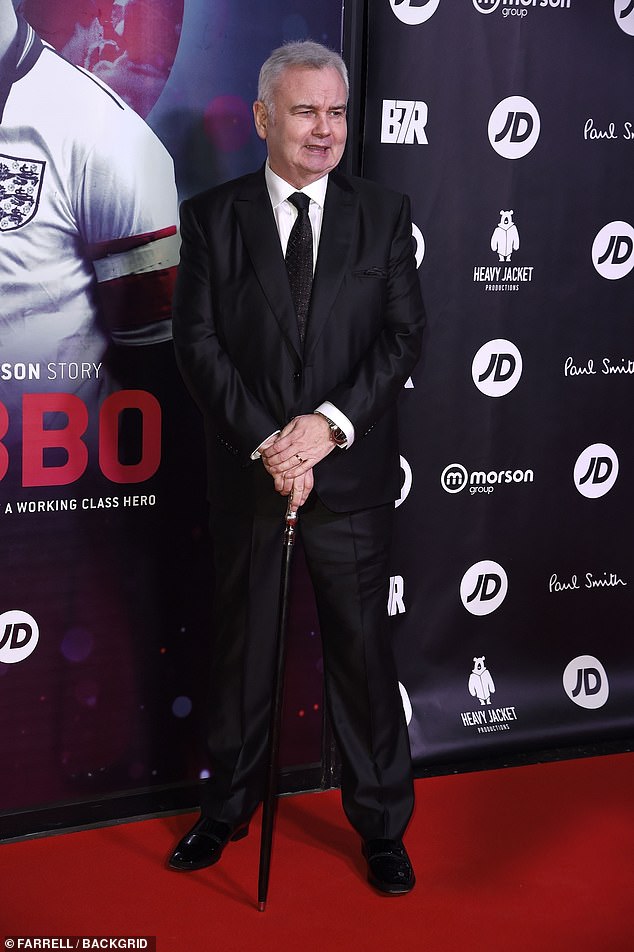 Dapper! Eamonn dressed to impress on his night out as he continued to recover from his recent injuries including a dislocated pelvis 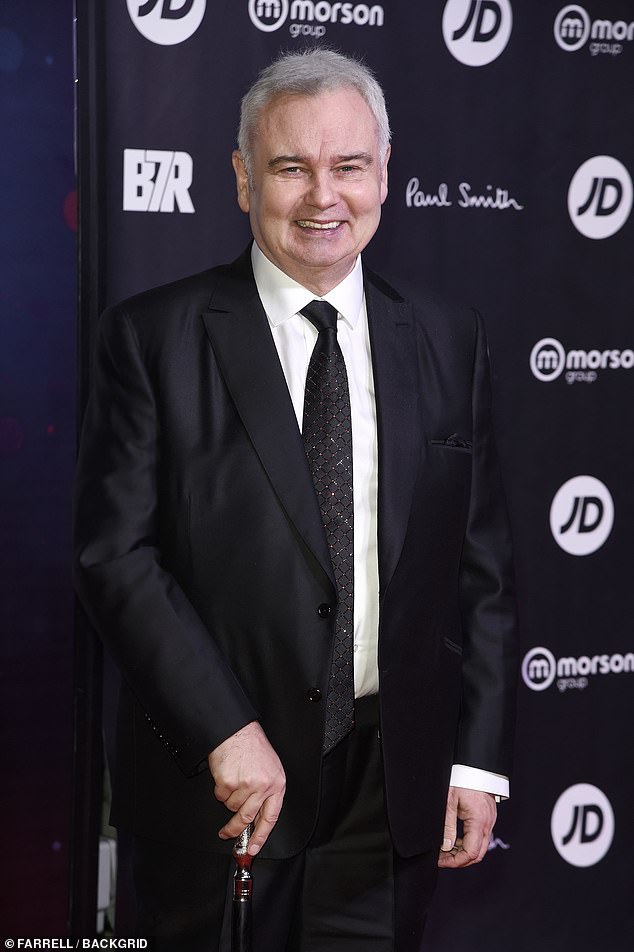 Pose: The presenter looked to be in high spirits as he stepped out on the red carpet with his walking stick as he continues to gain strength amid his health woes

Jack put on an equally suave display as he also opted for a black suit with a white shirt and classic leather derby shoes.

The Good Morning presenter shares Jack with his wife Ruth Langsford and is the couples only son together.

The film, ROBBO, follows the career of the English football manager and former Manchester United and England player, Bryan Robson.

Eamonn’s use of a walking stick comes after he was diagnosed with a dislocated pelvis and three slipped discs in March.

The TV personality has openly documented his health battles on social media and has told that recovery is like ‘learning to walk again’, as he continued to depend on crutches and walking aids in order to walk. 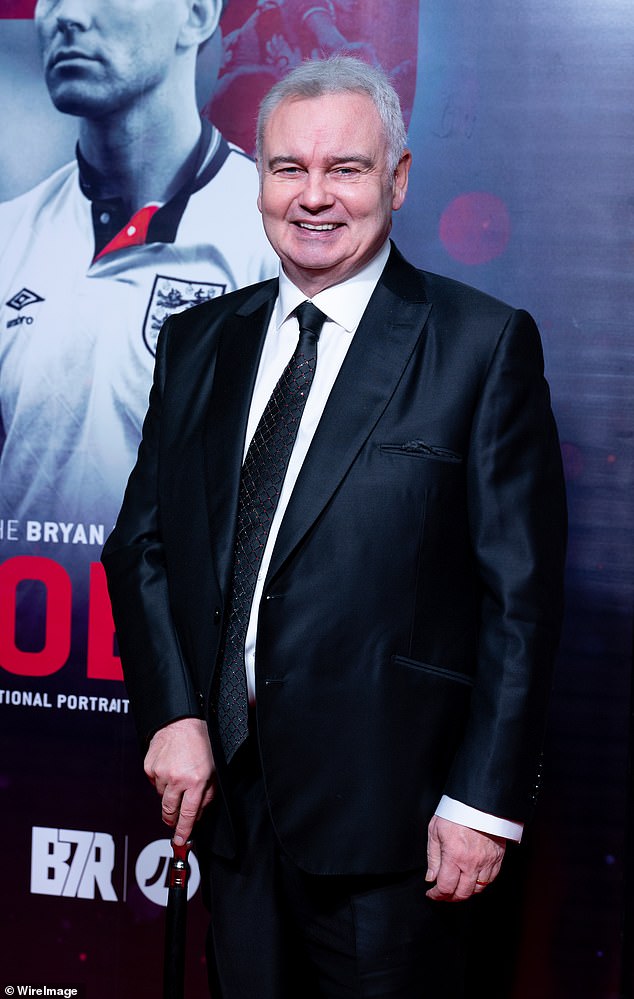 High spirits: Poorly: Eamonn’s use of a walking stick comes after he was diagnosed with a dislocated pelvis and three slipped discs in March

Detailing his pain during an episode of Loose Women in April, Eamonn said: ‘Thanks for asking me because obviously no one else is bothered to ask or wonders, I don’t like to complain, but it’s three slipped discs.

‘Actually I have to come on here with a crutch, that’s the way I am at the moment.

‘Honestly the thing about this, we can sit about me and I’ve got steroid injections and everything is ok and hopefully I’ll be ok, but for me it’s amazing to see how many of you are suffering from chronic pain, doesn’t matter if you’re a man, woman, young old.’

He went on to say: ‘I couldn’t sleep at night, lying there at night while Ruth was sound asleep next to me and it was awful, it was honestly awful.

‘I’m six weeks down the road with that, I’ve got the injections that takes away the acute pain. It’s a blessing, but the physicality of not being able to stand straight, but I’m going to do a rehabilitation to get better.’ 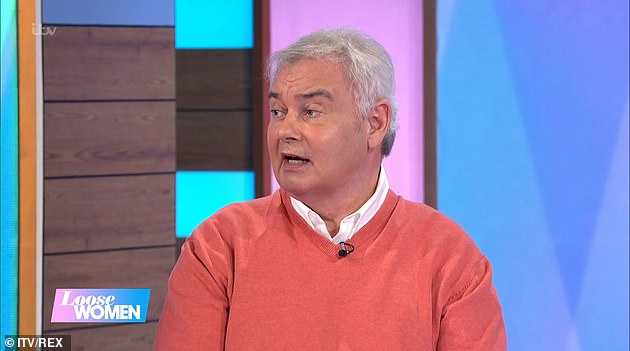 Oh no: Detailing his pain during an episode of Loose Women in April, Eamonn told how he’s been in ‘chronic pain’  and had to use a crutch, adding that he ‘couldn’t sleep at night’ due to the discomfort 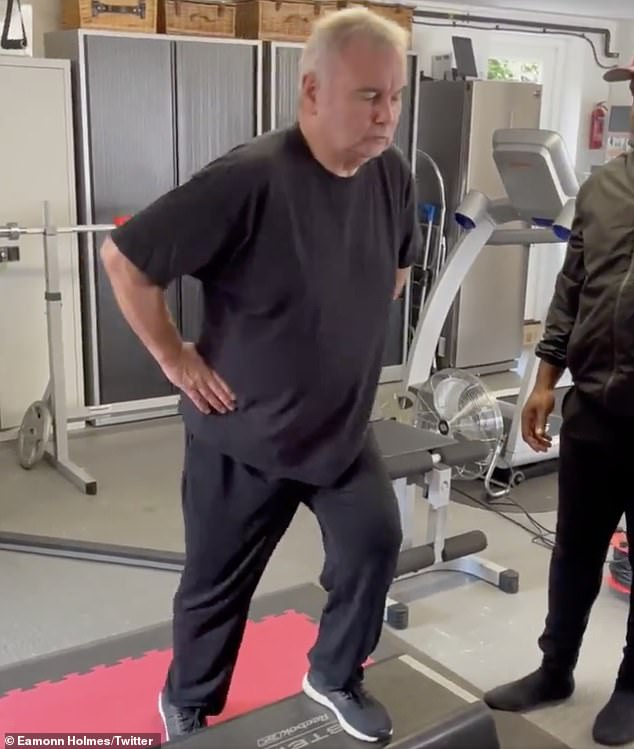 Chronic pain: Weeks later, he gave a glimpse of his recovery on Twitter, where he shockingly revealed he’s lost nerves in his right leg due to the injury

Weeks later, he gave a glimpse of his recovery on Twitter, where he shockingly revealed he’s lost nerves in his right leg due to the injury.

The Northern Irish star said: ‘This all looks very simple and it is very simple except it’s like learning to walk again.’

‘I’ve lost nerves in my right leg and there’s certain actions I can’t do so even the most simple thing is hard but it’s getting better.’

The video showed Eamonn, who had a double hip replacement in 2016, working out in his back garden, trying several exercises to strength and stabilise his pelvis as well as the muscles around his lumbar spine.

The previous month Eamonn shared how circulation boosters have helped him ‘get back out there’ doing daily activities.

Elsewhere, Eamonn previously revealed that he had tested positive for Covid-19 earlier this month but has since made a full recovery.

Eamonn offered his apologies for being a ‘no show’ on This Morning and personal events as he recovered at home, following his absence from the the ITV magazine show. 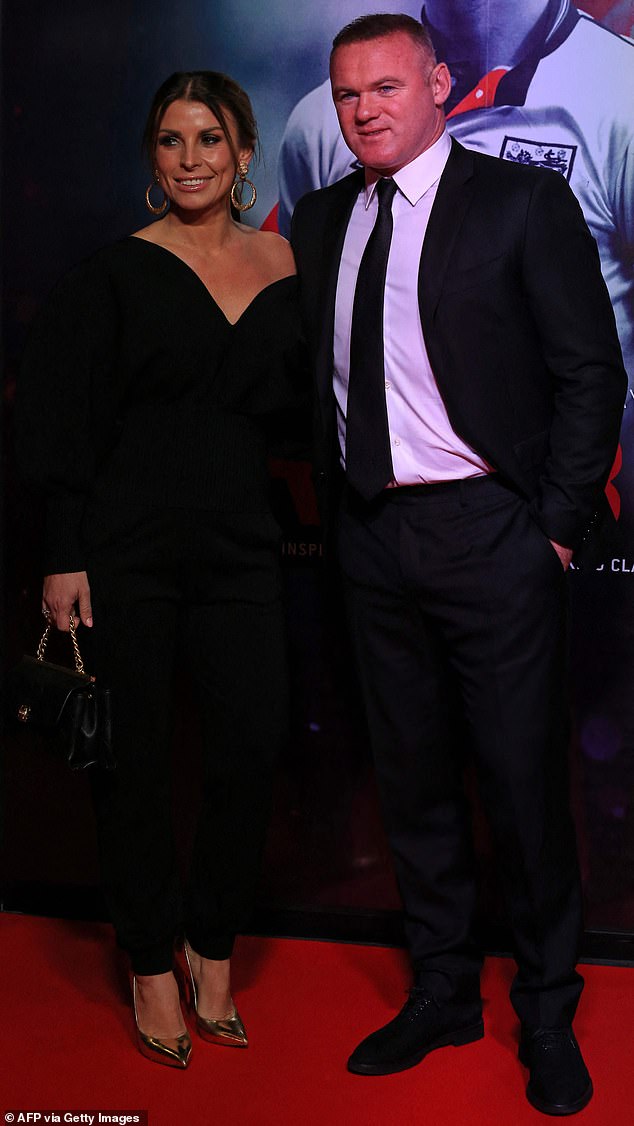 Night out: Coleen and Wayne Rooney also made a rare public appearance as they attended the event 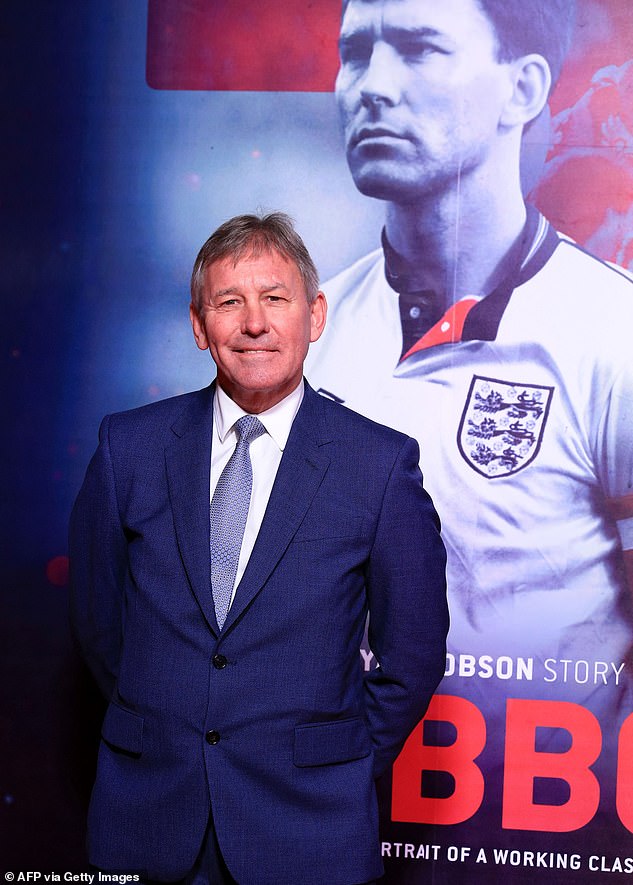 His story: ROBBO: The Bryan Robson story follows the career of the English football manager and former player

Eamonn and his wife Ruth Langsford typically filled in for Holly Willoughby and Phillip Schofield on This Morning in half-terms yet were notably absent.

It’s since been announced that he has quit This Morning to join GB News after a 15-year presenting stint on the show.

The veteran presenter will ‘front his own show several times a week’ on the news channel, joining a number of experienced journalists who jumped ship for the ‘free speech’ project. 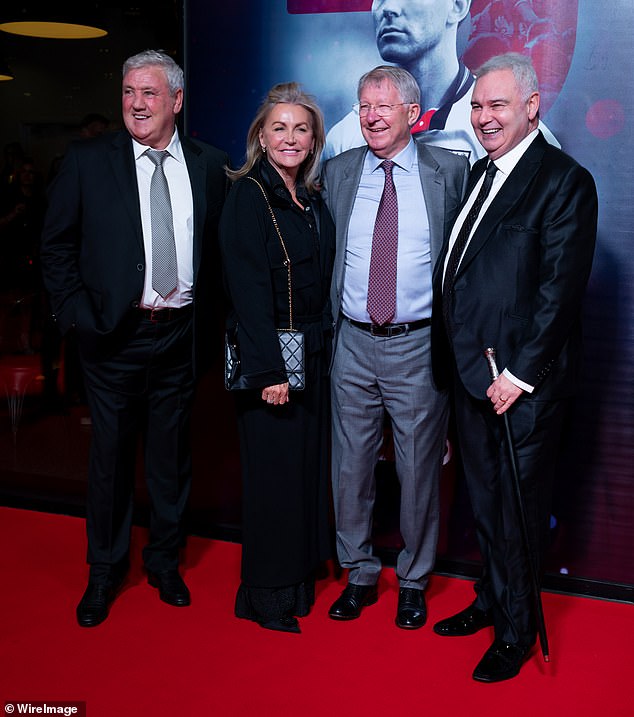 Noting that ‘all good things come to an end’, a source told The Mirror that Eamonn’s departure ‘came at just the right moment for both him and ITV’.

Meanwhile, Eamonn’s move is likely to jeopardise 61-year-old Ruth’s This Morning slot. The paper said she is ‘unlikely to remain on the show without him’ but ‘is expected to continue as a regular on Loose Women’.

In December, Eamonn and Ruth were replaced by Alison Hammond and Dermot O’Leary following a 14-year stint.

The source added: ‘Eamonn’s move to GB News marks the end of an era. He’ll be missed by many ITV viewers.’ 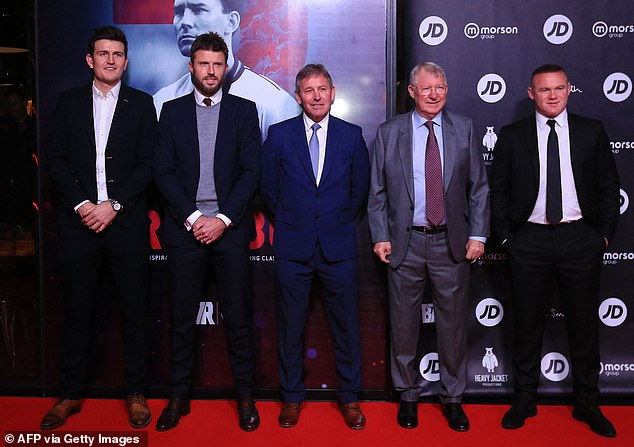