Amiable restaurateur the Earl of Bradford was devastated when his beloved first wife Jo abandoned him just days after their silver wedding anniversary.

So I’m sorry to hear that he’s now bereft again after his second wife, Penelope, left him.  He confirms the split, telling me: ‘I’m very sorry that our marriage has ended in divorce.’

The Earl, 74, also known as Richard Bridgeman, declines to discuss the breakdown of his marriage, but one of his friends tells me: ‘He’s devastated. Penny instructed the powerful divorce lawyers Vardags, who are pushing for a big settlement, but Richard simply doesn’t have that sort of money.’ 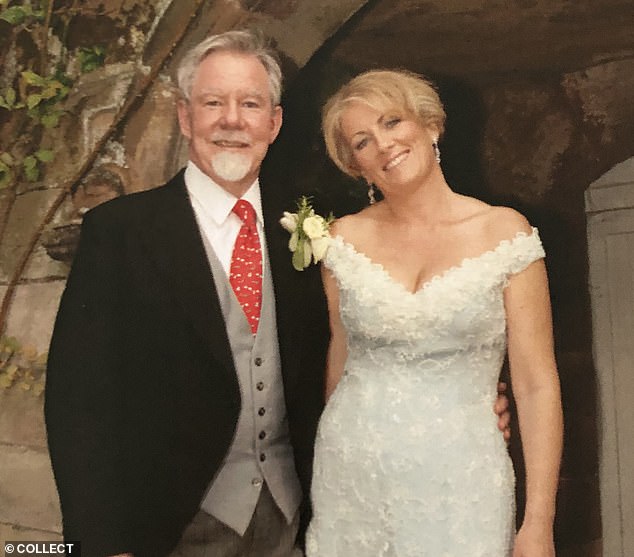 The Countess of Bradford, Dr Penelope Law with her husband Richard Bridgeman, 7th Earl of Bradford on their wedding day 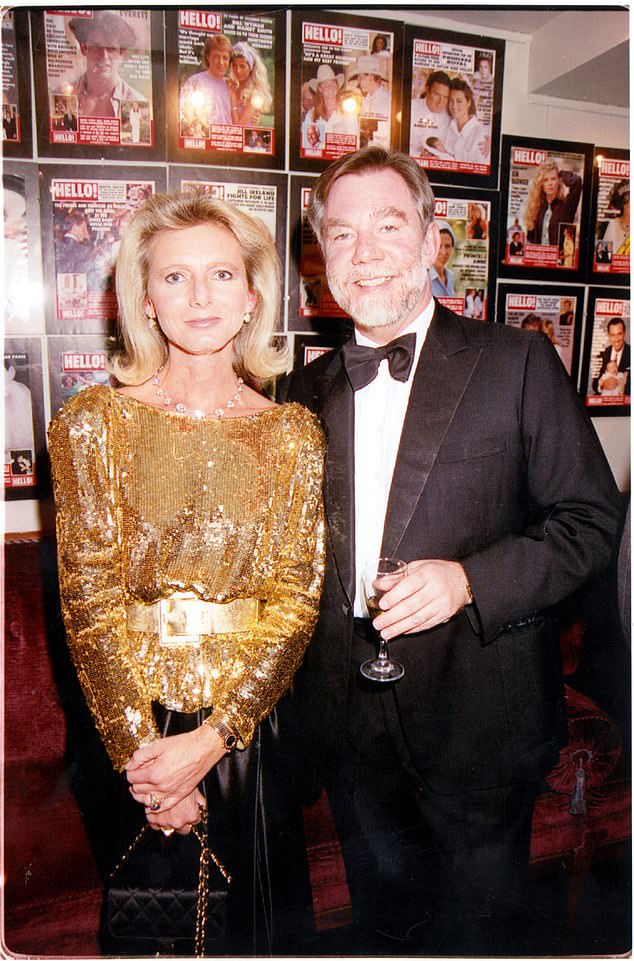 Yesterday, there was a divorce hearing at the High Court in London.

The Countess of Bradford, 60, is an obstetrician and gynaecologist known as Dr Penelope Law at London’s private Portland Hospital, where the Duke and Duchess of Sussex’s son, Archie, was born.

Author of the birthing guide Expecting A Baby, she’s light-heartedly referred to as the doctor who’s ‘too posh to pull’ because of the number of Caesarean sections she’s performed.

She married former Ukip candidate Richard in 2008 (pictured). They were introduced by his daughter Alicia at a prize-giving at £38,454- per-year Rugby School.

She is the mother of one of Alicia’s classmates. The wedding took place near Weston Park, his family’s former stately home on the Shropshire-Staffordshire border.

Penny has admitted in the past that her professional success has come at a cost to her personal life and that being on call wreaked havoc with her social life.

‘Nobody would come to my house for lunch,’ she has said. ‘Because on two previous occasions I’ve left them to make their own lunch.’

The Earl, who ran Porters English Restaurant in Covent Garden, has four children with his first wife, daughter of Mayfair bookmaker Benjamin Miller.

As a top model, Sophie Dahl was used to parading down the catwalk at the world’s fashion shows.

But she’s now revealed that she ‘had to learn to walk again’ after undergoing major surgery on her hip. 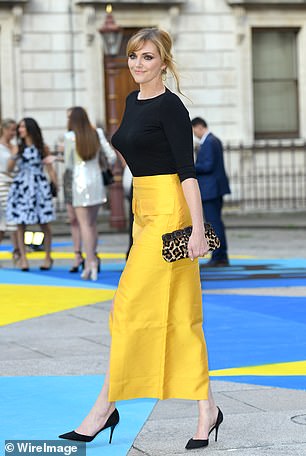 Sophie, 44, who is an author like her celebrated grandfather Roald Dahl, says she’s fought a debilitating battle with hip dysplasia since she was a child.

‘It wasn’t picked up when I was a kid,’ says Sophie, pictured before the op.

‘So I had surgery a couple of years ago where they cut my pelvis all around the acetabulum to create adequate hip sockets.’

Sophie, who has two children with her jazz musician husband Jamie Cullum, refers to the example of Roald’s first wife, Oscar-winner Patricia Neal.

She says: ‘Every time I felt sorry for myself, I’d think of my grandmother, who had three cerebral aneurysms when she was 39, which rendered her paralysed and without speech, and I’d pull myself together and try and climb the stairs again.’

David Cameron was distinctly unamused by the indiscretions about him recorded in the diaries of Sasha Swire, wife of his old chum and fellow Etonian Hugo Swire.

Now, former Foreign Office Minister Hugo has tried to cheer up Cameron, who has been embroiled in a lobbying scandal over his involvement with the failed Greensill Capital company.

‘But David said, why would he want to end up as the first chapter of your wife’s next collection of diaries? Hugo told him not to worry — Sasha was too busy writing Greensill The Musical.’

Art fan Beatrice is a real picture of joy

Princess Beatrice gave birth to her first child, Sienna, just three weeks ago but she and husband, Edoardo Mapelli Mozzi, are determined to keep up their social life. 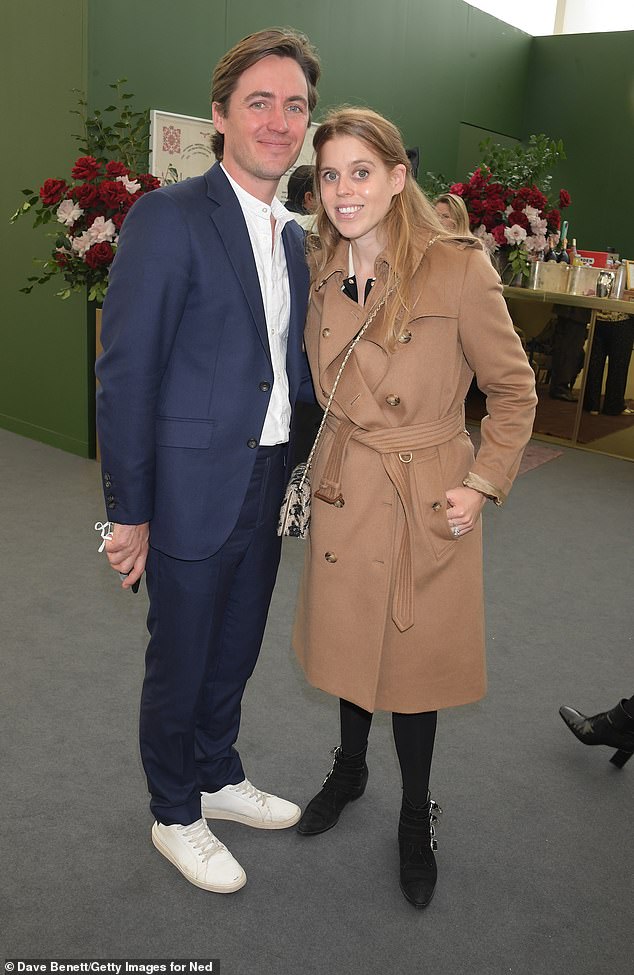 Yesterday, the Queen’s 33-year-old granddaughter and the property developer, 38, attended the Frieze Art Fair, where they were joined by Lady Amelia Windsor, 26 (right), whose grandfather is the Duke of Kent.

Edo also has a four-year-old son, Christopher, known as ‘Wolfie’, with his ex-fiancee Dara Huang.

The glamorous architect, 38, has also made an appearance at the annual art fair in Regent’s Park, London, this week.

Employing Boris Johnson’s wife Carrie as his ‘spin doctor’ seems to have emboldened casino and wildlife park heir Damian Aspinall to make strange requests to No10.

I can reveal he emailed to demand the PM shut down London Zoo. Aspinall said: ‘In ten years or less, urban zoos, or zoos less than 50 acres should be closed, or only hold a maximum number of animals.’

The email was sent in April, three months after Carrie started working for him. It has been released under Freedom of Information laws. 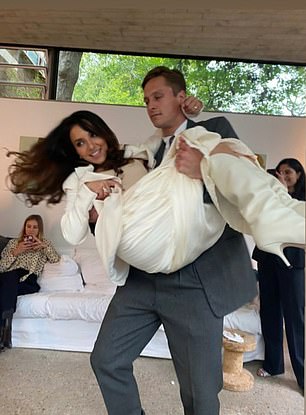 SHE’S been swept off her feet!

Despite having appeared in Vogue as a teenager, Arthur, 33, took the more cerebral route to become a maths teacher.

But the son of Old Etonian businessman Roddy Campbell and architect Sophie Hicks proved he still has a flair for the flamboyant by dramatically carrying his bride around at the reception in London.

After delivering an emotional speech, Arthur’s father admitted: ‘I teared up at the end.

How much would you pay for a fancy meal?

According to the BBC’s Great British Menu star Daniel Clifford, diners should expect to shell out almost £1,000 per person at a top restaurant.

Discussing how ‘cheap’ it is to eat out in Britain, the two Michelin-starred chef says: ‘I went for a meal in Paris and our bill was £900 each. We didn’t have any fancy wine, we had four courses in a threestar restaurant and we all walked away from there and said: “It’s full [of diners].”

’One of the most expensive restaurants in London is trendy Nusr-Et in Knightsbridge, run by the flamboyant chef known as ‘Salt Bae’.

But Clifford blasts: ‘Do you want a [£630] steak cooked by Mickey Mouse or do you want to come to a two-star restaurant where you’ve got 15 chefs that care about everything they do?

‘There’s a big difference, isn’t there?’