Country house prices have boomed during the pandemic, but pop star Robbie Williams has agreed to sell his rural idyll for a huge discount after discovering that it was haunted.

I hear the former Take That singer, whose solo hits include Angels, has accepted an offer on Compton Bassett House in Wiltshire, after slashing the asking price by £1.35 million — that’s more than five times the average British house price.

He and his wife, former X Factor judge Ayda Field, 42, bought the seven-bedroom property for £8.1 million in 2008.

They put it on the market last September with a guide price of £6.75 million. An estate agent at Knight Frank confirms that it has now been sold ‘subject to contract’. 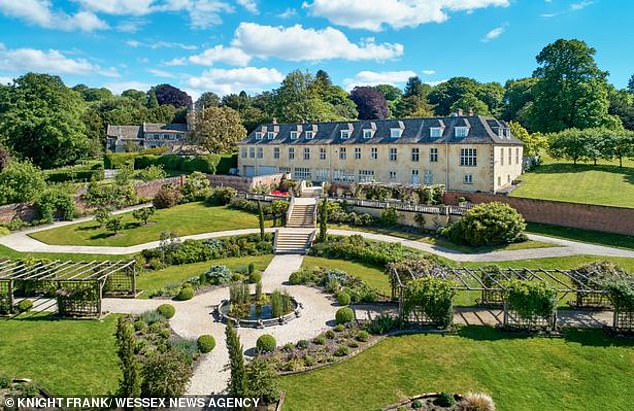 I hear the former Take That singer, whose solo hits include Angels, has accepted an offer on Compton Bassett House in Wiltshire, after slashing the asking price by £1.35 million — that’s more than five times the average British house price

The price cut is something of a shock because rural house prices in the South-West are said to have increased by more than 10 per cent in the past year as city-dwellers move to the country.

The 18th-century property sits on a 71-acre estate, and has its own football pitch, tennis court, 73 ft-long swimming pool, helicopter hangar and gym, as well as additional accommodation for staff and guests.

Williams, 47, revealed in 2020 that the house had left him and his four children, Theodora (‘Teddy’) nine, Charlton, seven, Colette, three, and Beau, 23 months, feeling that it was haunted.

‘There is one room that I am suspicious of,’ he said. ‘It gives me the creeps.

‘Teddy, our daughter, was sleeping in there. She doesn’t any more. 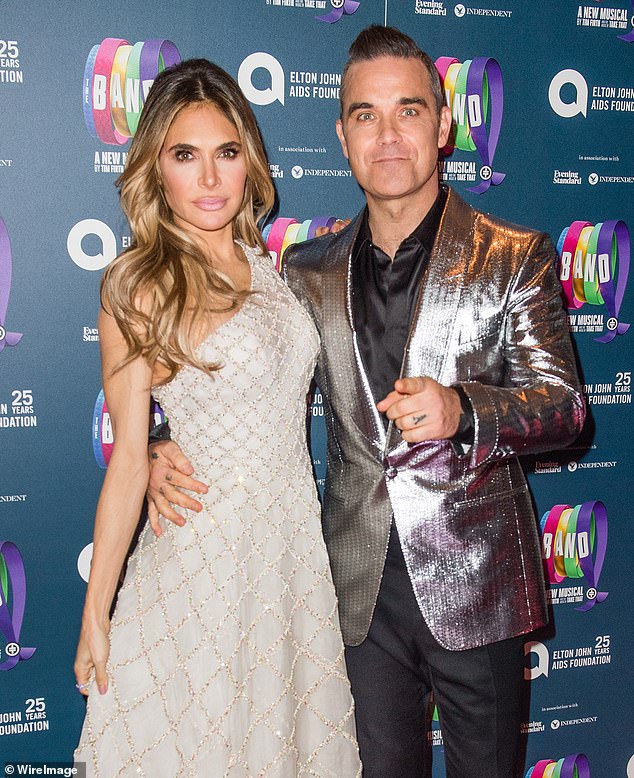 He and his wife, former X Factor judge Ayda Field, 42, bought the seven-bedroom property for £8.1 million in 2008

He added: ‘If there is great grief or great pain or tragedy, I think it can soak into the walls and leave an essence there that remains for a very, very long time.’

Potential buyers are also said to have been turned off by a nearby landfill site, which locals say causes a ‘horrible smell’.

In 2013, neighbours complained of an ‘obnoxious’ pong from the dump.

Matt Hancock, who quit as Health Secretary after being caught in a steamy clinch with his married aide, Gina Coladangelo, is still deemed worthy of freebies. The MP has disclosed that he received four tickets worth a total of £400 to Capital’s Jingle Bell Ball at London’s O2 arena, where pop stars including Justin Bieber and Ed Sheeran performed.

No doubt Hancock, who wore a black turtleneck jumper with jeans, was in his element singing along to Sheeran’s song Bad Habits.

Minnie is driven away by ageist LA

Tinseltown is no place for women as they get older, says Minnie Driver, who has slammed short-sighted movie moguls after returning to her native London.

‘In Hollywood, it’s always about the youngest, the freshest and the newest,’ says the 51-year-old actress, who was nominated for an Oscar for her performance in Good Will Hunting. ‘It becomes so myopic.’

Driver, who also starred in hit television drama The Riches, says that she had to flee Los Angeles.

‘You need to really emancipate yourself unless you’re going to sequester yourself for the rest of your life when you’re not super young any more — which is what Hollywood requires a lot of women to do.’

Jodie Comer, who made her name with her Russian accent in Killing Eve before becoming a Hollywood star, says that she faced prejudice because of her Liverpudlian brogue.

‘I did a theatre play when I was around 18 and the character had an RP [Received Pronunciation] accent, and I got the role,’ says the 28-year-old actress.

‘The director was very honest with me and said, “Before you came in, [when] I saw where you were from, I was like: Why have we brought her in?” I wasn’t offended; I just found it very interesting. I was actually really happy that she was honest.’

Comer says this was far from an isolated incident. ‘Often people say, “Oh, can you change your accent?” because you don’t see a lot of Scousers on the television. [They] question your ability.’ 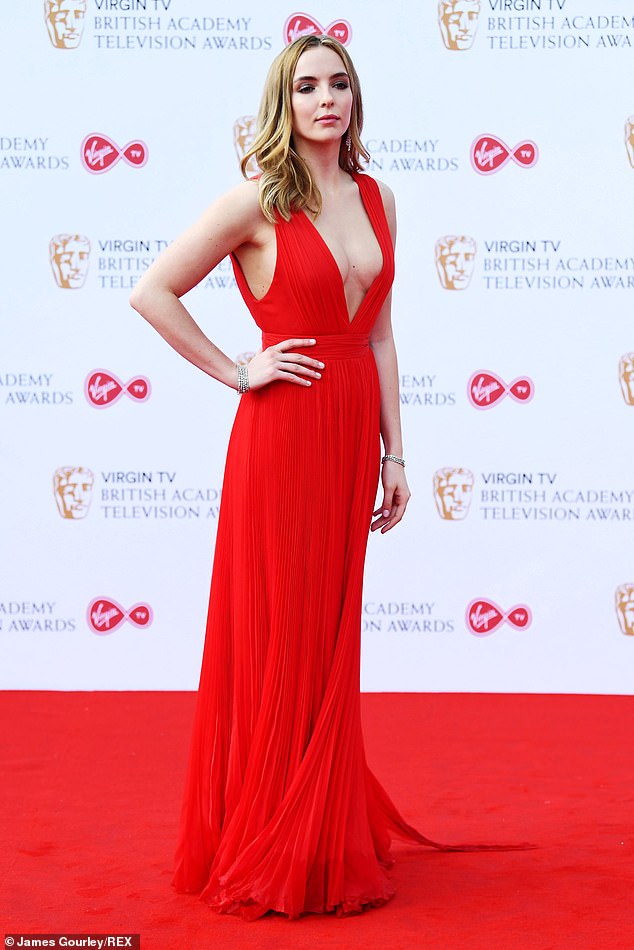 Jodie Comer, who made her name with her Russian accent in Killing Eve before becoming a Hollywood star, says that she faced prejudice because of her Liverpudlian brogue

Comedian Ricky Gervais, who hosted the Golden Globe Awards five times, couldn’t care less that Hollywood boycotted this year’s ceremony over a lack of diversity in the voting panel, among other ethical issues.

‘I don’t watch award shows unless I’m at them,’ The Office star, 60, admits. ‘They’re boring; they’re all awful. Who wants to watch three hours of rich, beautiful people slapping each other on the back?’

It reminds me of Noel Coward’s comment: ‘Television is for appearing on — not for looking at.’

Tennis champion Novak Djokovic might think he’s had a hard time Down Under, but spare a thought for socialite Poppy Delevingne.

The actress and model has revealed she spent more than a week in ‘total isolation’ in hospital in Thailand after testing positive for Covid when she landed.

‘The last ten days have been the toughest,’ says the property developer’s daughter, 35. ‘I’m not in the right headspace to dwell on it too much.

‘While the situation was extraordinarily lonely, it was also powerful and I will take so much away with me from the experience.

‘I couldn’t have done it without my friends and family, who kept my spirits up with endless FaceTimes and WhatsApps.’

Fred is very nifty at fifty

Ooh la la! First Dates maitre d’ Fred Sirieix is keen to show off his physique as he approaches his 50th birthday later this month.

The Frenchman, who greets the hopefuls looking for love on his hit Channel 4 show, has shared this topless selfie, displaying his muscular torso and biceps.

A keen amateur boxer, he’s set his sights on spending more time in the ring. ‘As much as I won’t probably be the world champion any more, I’m not ready to throw in the towel just yet.’

Unlike the guests on his programme, Sirieix has no need to seek romance himself: he’s engaged to a Jamaican whom he affectionately calls ‘Fruitcake’. He’s always refused to disclose her name. He has a 17-year-old daughter, Andrea, and a son, Lucien, 11, from a previous relationship. 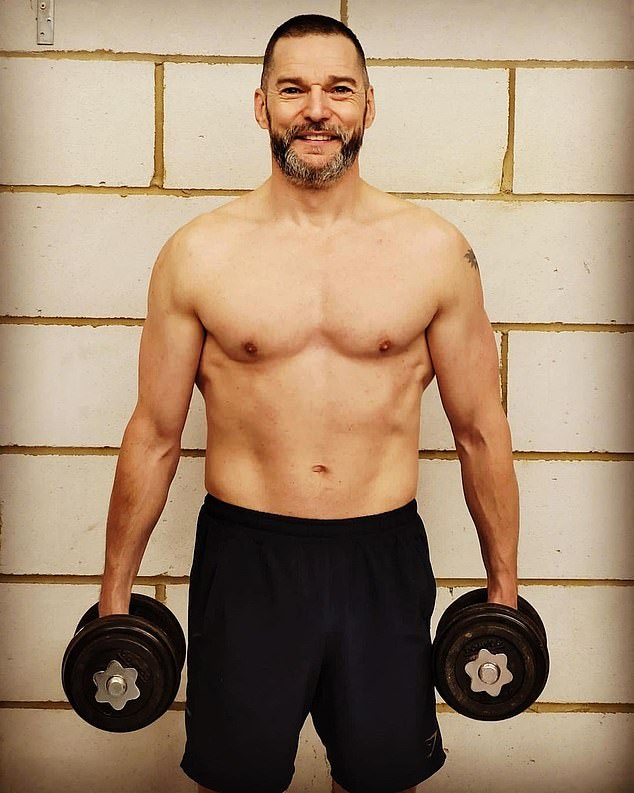 Ooh la la! First Dates maitre d’ Fred Sirieix is keen to show off his physique as he approaches his 50th birthday later this month