Hundreds of England fans missed the start of their team’s seismic collapse on Saturday due to huge queues ahead of the series opener.

Punters in their thousands have travelled to watch the five Twenty20 matches at the Kensington Oval in Barbados.

A crowd of up to 6,000 — under the island’s Covid restrictions — were expected to attend the first game, which resulted in a crushing nine-wicket win for West Indies after captain Eoin Morgan saw his side slip to 26 for four in the powerplay. 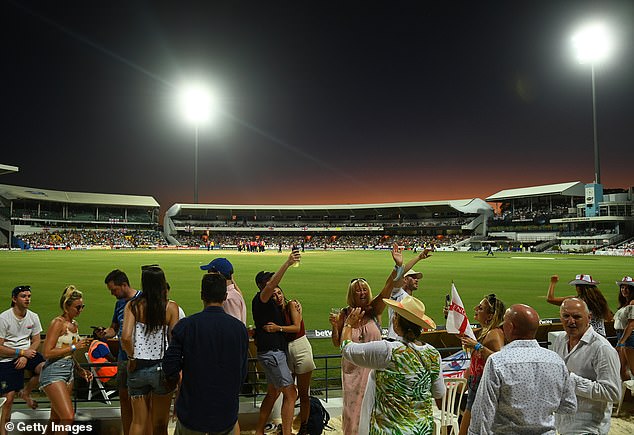 However, travelling supporters were unable to gain entry at that point due to stringent vaccination checks at the gates.

Cricket West Indies (CWI) said those who purchased tickets were advised to give themselves two hours to get into the ground, as per guidance for the safe hosting of public events in Barbados, and that everyone was in before 4.30pm — half an hour after the first ball.

Some fans also turned up with ‘invalid’ tickets after a software bug prevented original QR codes being scanned.

CWI had sent out emails to warn holders of the need to download new codes 24 hours before the game.

Meanwhile, Kensington Oval is attempting to emulate the business model of London’s Kia Oval with a multi-million-pound naming rights deal.

Surrey’s agreement with the South Korean car manufacturers, which stretches back to 2005 and expires in 2024, is worth just under £1million annually and the management team of the 15,000-capacity Barbados venue is aiming to secure £600,000 a year over a minimum five-year term.

Although numerous cricket grounds in England have venue partners, such relationships are yet to develop in the Caribbean. The investment is likely to come from East Asian companies.