Erika Jayne is facing tough questions about her embezzlement scandal and legal woes in the latest teaser for Real Housewives of Beverly Hills.

The 50-year-old reality star and her estranged husband Tom Girardi, 82, are both currently facing claims of allegedly embezzling settlement funds that were meant to help the families of plane crash victims.

‘You wanna know who your friends are? Get old and go broke,’ Erika is heard saying at the beginning of the clip, as she addresses the scandal that her legal team have denied. 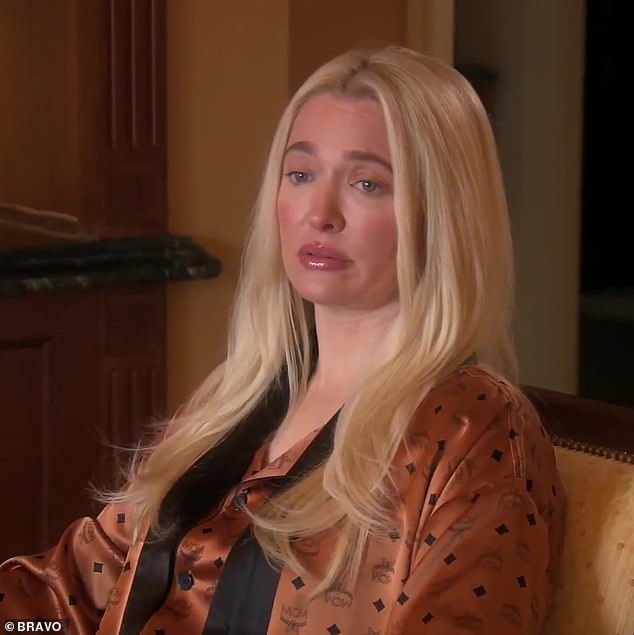 Facing the music: Erika Jayne, 50, looks tired and emotional on the latest Real Housewives of Beverly Hills teaser as she faces tough questions over her alleged embezzlement scandal

Kyle Richards, 52, is then heard saying, ‘She’s going to have to answer more than she’s comfortable with, because we deserve to know the truth’ as Garcelle Beauvais, 54, passionately tells the group, ‘I am not going to s*** on her when she’s at her bottom. That’s not who I am!’

The next scene shows Erika facing her friends during what appears to be a tense dinner, with Garcelle saying, ‘If what Tom did is true, then f*** Tom.’

In another dramatic moment, Erika declares at the table: ‘If he stole the money then I would like to know where it is.’ 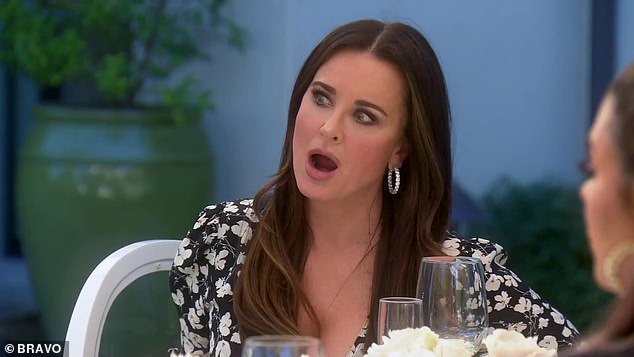 Coming for her: Kyle Richards, 52, is heard saying about Erika’s drama, ‘She’s going to have to answer more than she’s comfortable with’ 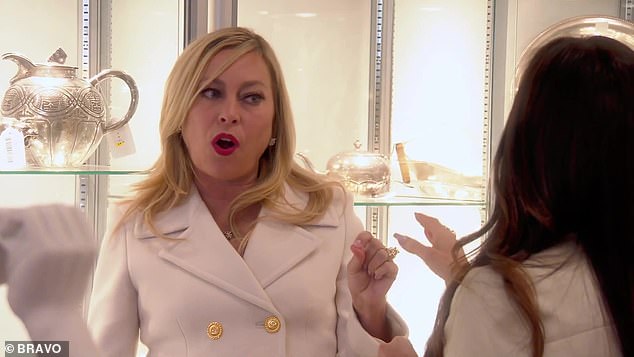 Not convinced: Sutton Stracke, 49, appears to be less than convinced as she is seen stony-faced, and later questions, ‘Have we been duped by the lies?’ 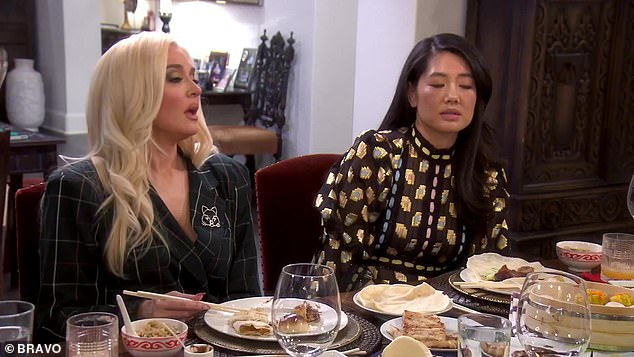 Telling her side: Erika is emotional and angry when getting her point across in the latest clip

‘I’m asking you to believe me instead of an article,’ Erika continues in a different scene, pushing for her fellow Housewives to believe her side of the story.

However, Sutton Stracke, 49, appears to be less than convinced as she is seen stony-faced, and later questions, ‘Have we been duped by the lies?’

Pulling no punches, Erika snaps back at Sutton: ‘If you ever call me a liar again, I’m coming for you,’ adding later: ‘Guess what, b****? I’m not threatening, I’m promising.’ 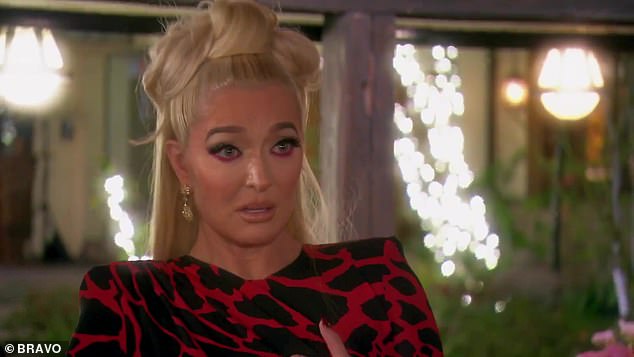 ‘Look at me!’ Erika makes a plea for her cast mates to believe her 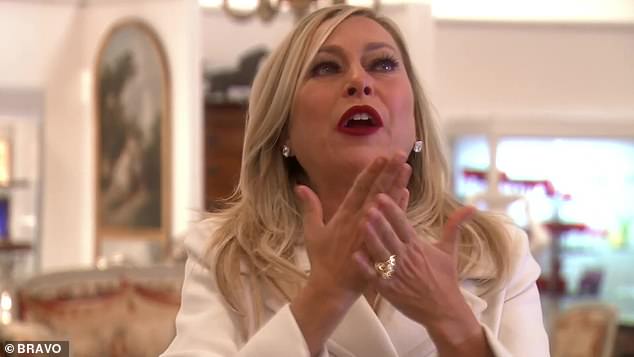 Looking for a fight: Sutton does not appear to be convinced by what Erika has to say, and is scared when she receives threats from her 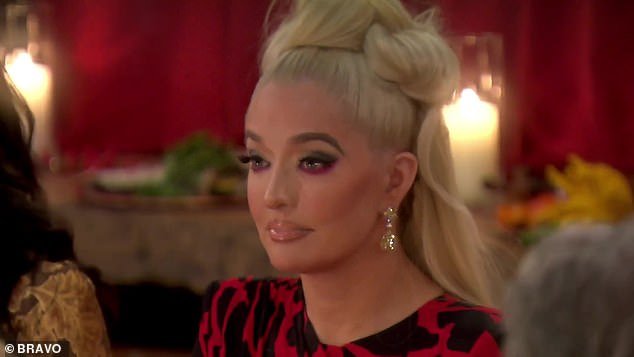 On the warpath: Erika appears to have no time for those not buying what she has to say

Sutton is also seen crying as she looks genuinely terrified by Erika’s aggressive language and threats.

Kathy Hilton attempts an olive branch by offering that ‘everybody’s got a skeleton in their closet’ while Erika says in a bid to be transparent: ‘Look at me, look at my f******g life.’

Erika previously opened up to castmate Kyle on the show, telling the actress she hasn’t spoken to her ailing lawyer husband since they split in November 2020. 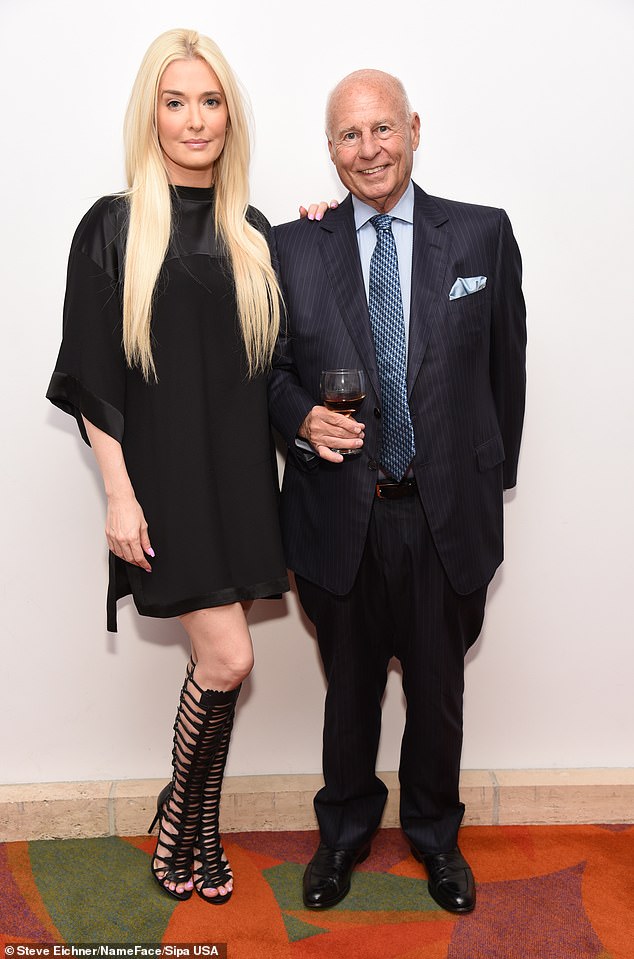 In hot water: Girardi is currently under investigation amid accusations he ‘misappropriated at least $2 million’ meant for the families of those killed in the Lion Air Flight 610 crash in Indonesia. They’re seen in 2016 above

‘One of the reasons I filed for divorce is the resistance to anything,’ she said, explaining how he became agitated when she pointed out how his eyes and ears were starting to give out.

The revelation came a day after Girardi was officially placed under a conservatorship because of his dementia diagnosis.

A court in Los Angeles agreed the move due to Girardi’s dementia diagnosis, which is classified as a ‘major neurocognitive disorder’, People recently reported. 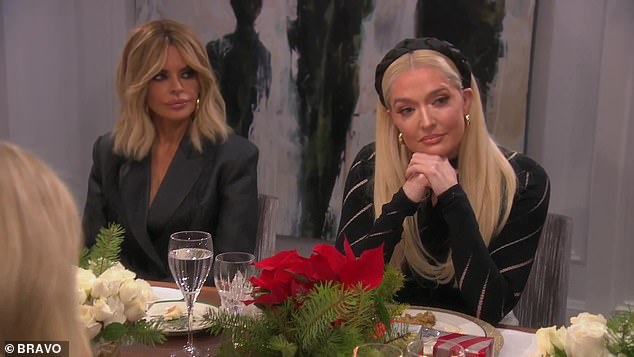 Tense: Erika sits by Lisa Rinna as she listens to what the other ladies have to say 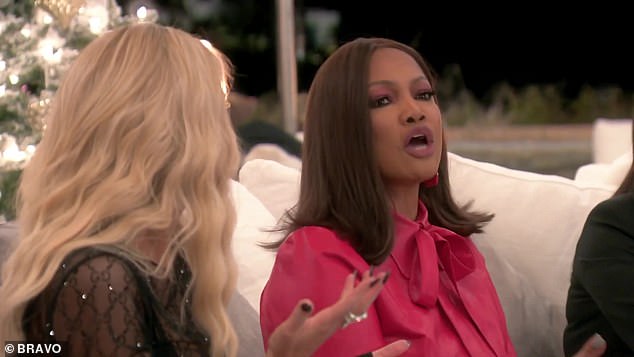 Plea: Garcelle Beauvais, 54, passionately tells the group, ‘I am not going to s*** on her when she’s at her bottom. That’s not who I am!’ 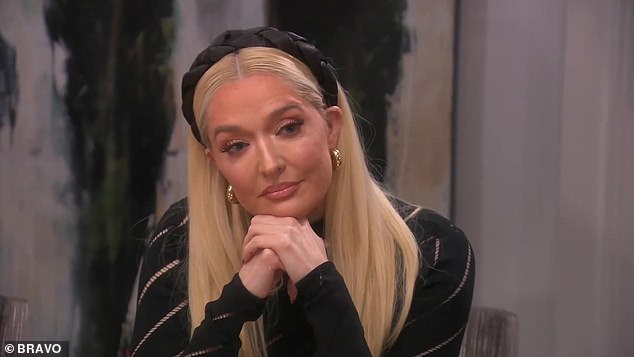 A friend in need: The singer and reality star is looking for support from the group 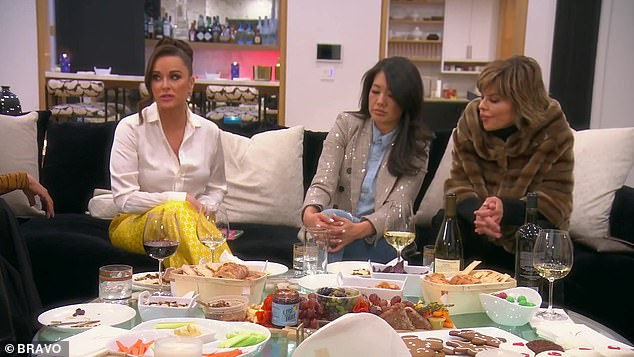 Will they be on her side? Erika’s legal woes are a hot topic for the group

Robert made the legal filing after a June 9 court hearing in which he was appointed as Girardi’s permanent conservator.

Girardi is at the center of a high-profile investigation into fraud and embezzlement related to his legal work.

Jayne, who’s been accused of benefiting from funds meant for her husband’s clients, recently shot down claims that her divorce filing was a ‘sham’ to protect assets. 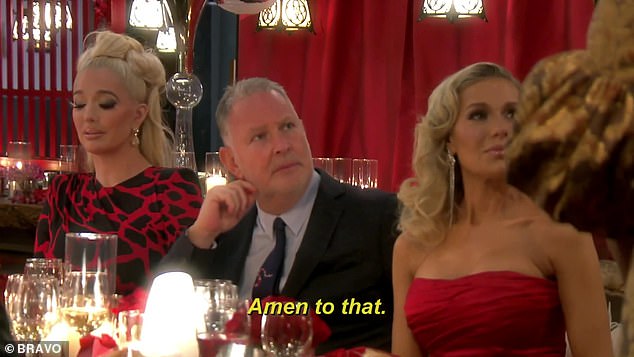 Emotions: Erika spends much of the clip looking teary-eyed 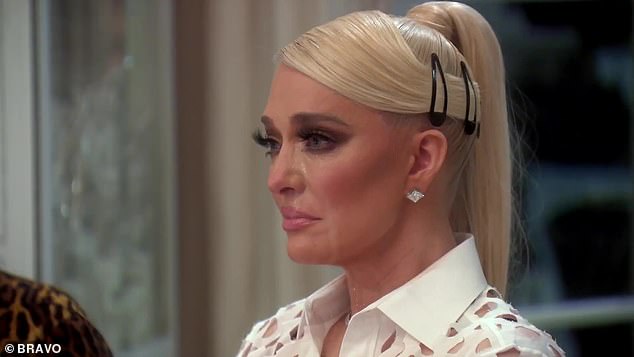 Crying: It’s been an emotional time for Erika as she details her struggles on the show 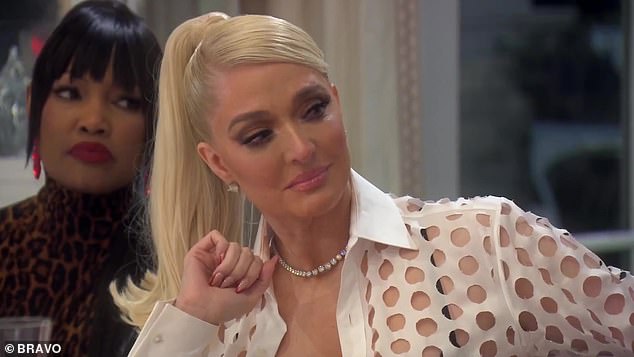 Be warned: However, she is quick to snap at anyone who tries to cross her 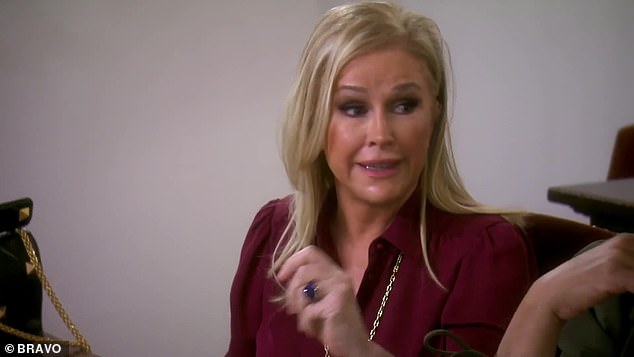 Weighing in: Kathy Hilton attempts an olive branch by offering that ‘everybody’s got a skeleton in their closet’ 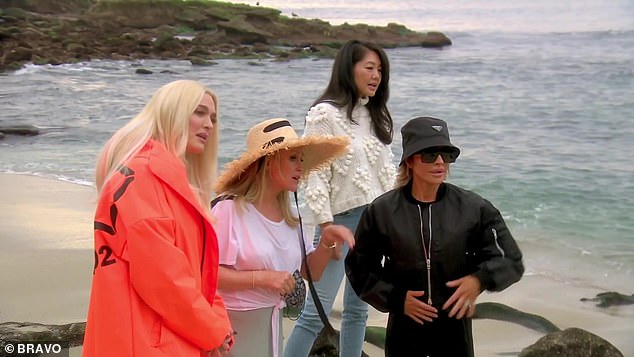 Still part of the gang: The embattled star is seen on a group outing in the new clip 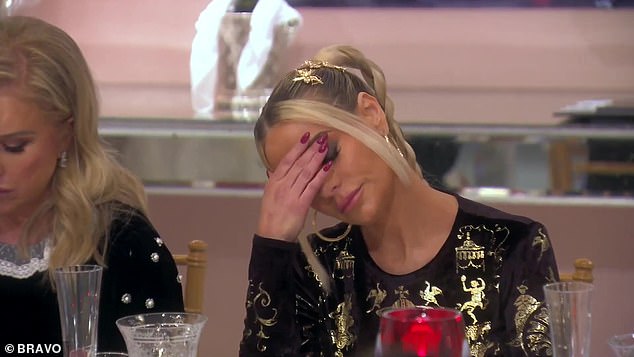 Causing a big headache: Erika’s legal drama is proving to be arduous for some of her cast mates

In December 2020, a federal judge in Chicago froze Girardi’s assets, saying the well-known Los Angeles lawyer had ‘misappropriated at least $2 million’ meant for the families of those killed in the Lion Air Flight 610 crash in Indonesia.

In March, the LA Times reported that there had been more than 100 lawsuits filed and multiple complaints made to the California State Bar against Girardi by disgruntled clients who alleged financial wrongdoing and theft.

Jayne has been ‘ordered to turn over financial records’ from her accountant, lawyer and landlord as part of the embezzlement investigation and a bankruptcy trustee is documenting the couple’s assets. 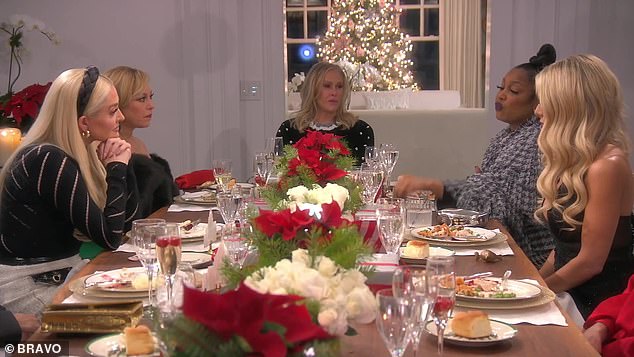 Having it out: Viewers will get to see the full extent of the table talk between the ladies 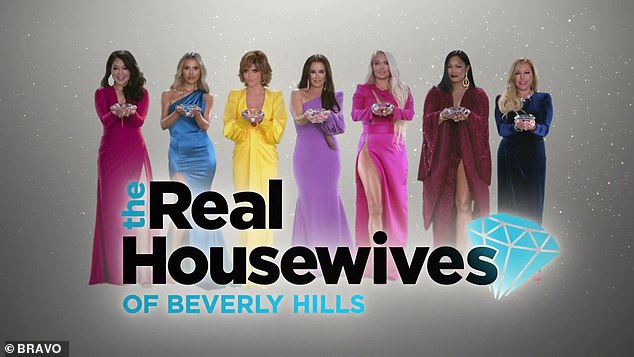 Secrets of the show: There’s still more to come from Erika’s big revelations on the series

It’s been alleged that the split provided a way for the couple to embezzle funds and that Jayne had received ‘tens of millions of dollars’ from her husband’s firm to fund her projects, UsWeekly reported in June.

Girardi’s lawyers claimed earlier this year that he had ‘issues’ with ‘mental competence’ and it was subsequently disclosed that he had been diagnosed with dementia and late-onset Alzheimer’s disease.

The Real Housewives of Beverly Hills airs Wednesdays at 8pm on Bravo.