A bizarre clip has emerged showing Leeds United fans refusing to return the ball to Chelsea’s Marcos Alonso despite their side losing in a crucial fixture.

Leeds, who find themselves in 18th below Burnley and Everton having played a game more than both clubs, were beaten 3-0 at home by Thomas Tuchel’s Chelsea.

Goals from Mason Mount and Christian Pulisic, either side of a Daniel James red card for a horror challenge on Mateo Kovacic before Romelu Lukaku sealed the win late on ensured a horror evening at Elland Road for Leeds. 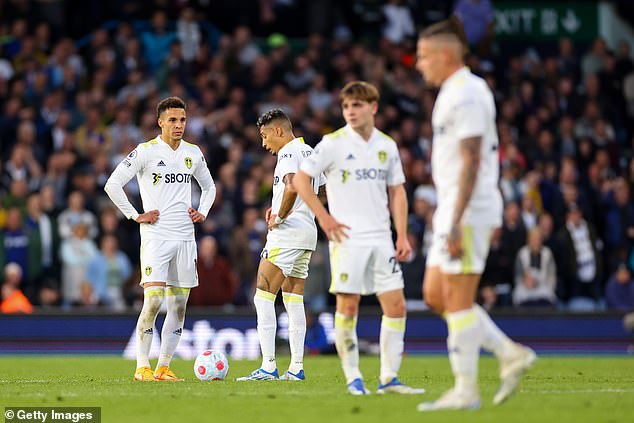 However, it appeared some fans were appreciating the lighter side of life with a clip showing one supporter refusing to return the ball to Chelsea left-back Alonso.

In the short video, a supporter can be seen clutching the ball with other supporters around her appearing to be laughing.

The woman holding the ball can be heard claiming that ‘it is our ball’, with fans around her seemingly gesturing for her to give it to a young boy a few rows in front.

The person recording the clip then zooms in on a waiting Alonso, who, with his side cruising in the game, appears to find the funny side in the whole episode. 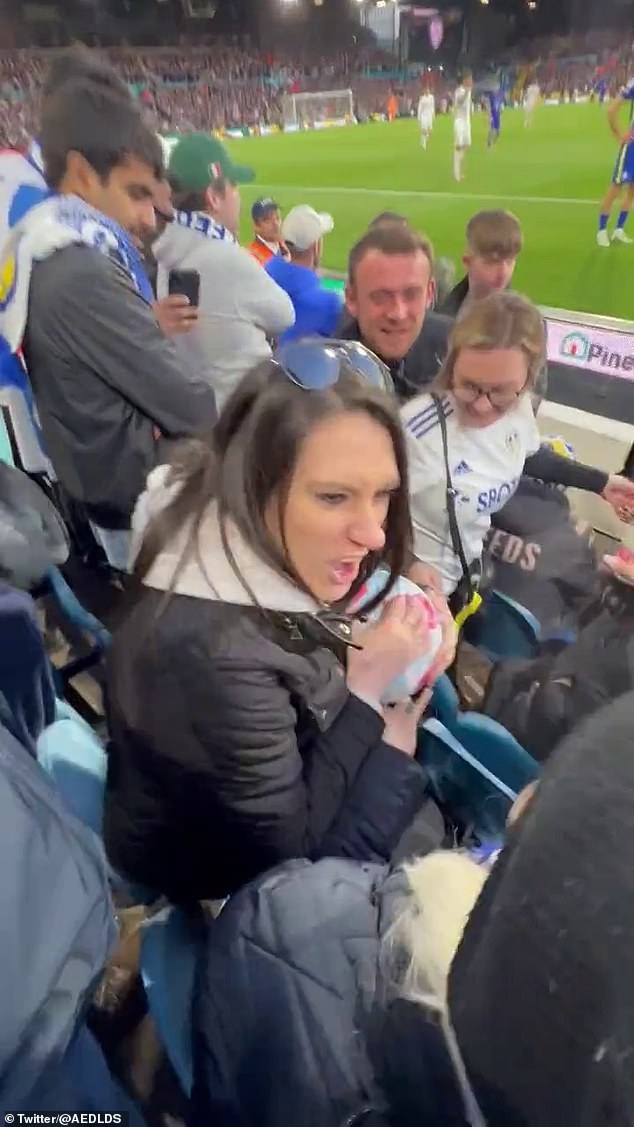 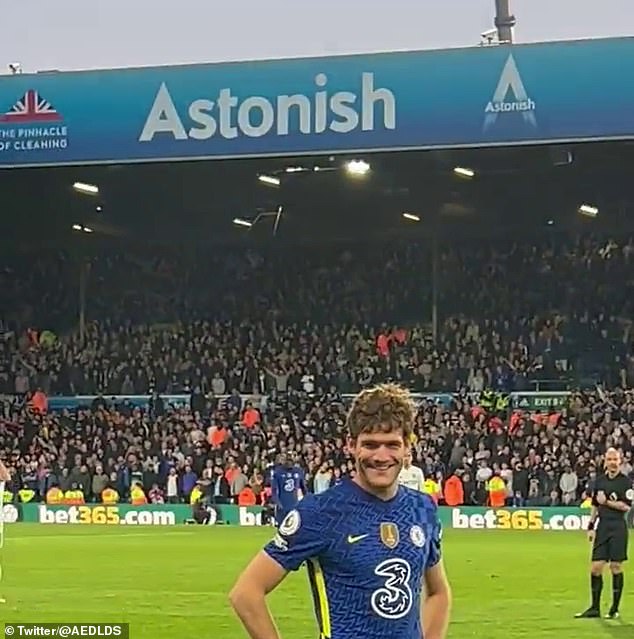 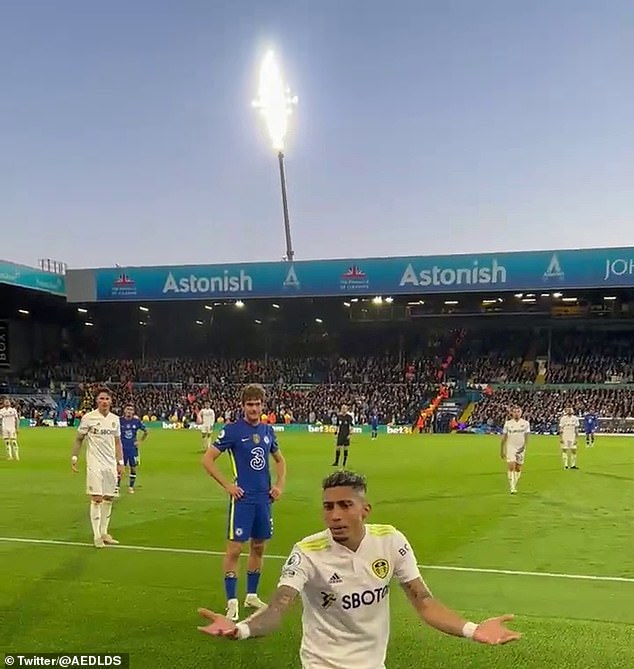 However, Leeds winger Raphinha finds the whole situation less amusing as he comes running over to near where the situation is happening to demand the ball be given back quickly.

Upon the Brazilian’s insistence, the ball is returned and Alonso delivers it back into play for the game to restart.

Fans on social media expressed their bemusement at the whole episode, with one asking why supporters around the woman did not demand the ball be returned more vociferously. 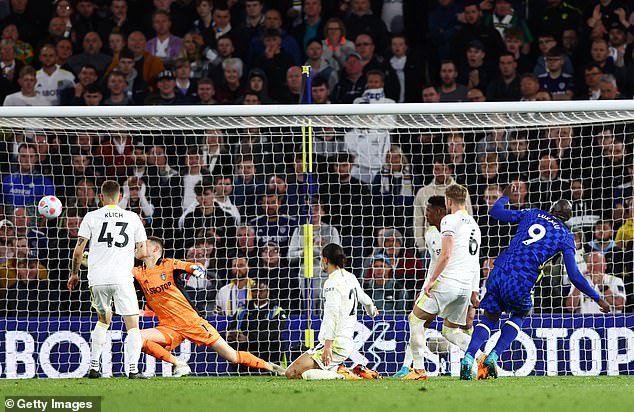 ‘I don’t get this. Everyone laughing and joking around her, wasting time when you’re losing and in a relegation battle. Why aren’t the Leeds fans going mental at her to get the ball back to him?!’ one wrote.

Meanwhile, a Chelsea fan captioned a grab of Alonso staring at the supporter withholding the ball with: ‘Alonso is astonished at their foolishness.’

I don’t get this. Everyone laughing and joking around her, wasting time when you’re losing and in a relegation battle. Why aren’t the Leeds fans going mental at her to get the ball back to him?! 🤷🏼‍♂️ https://t.co/SByinILboZ

Alonso is astonished at their foolishness pic.twitter.com/iJLzaNxhEQ 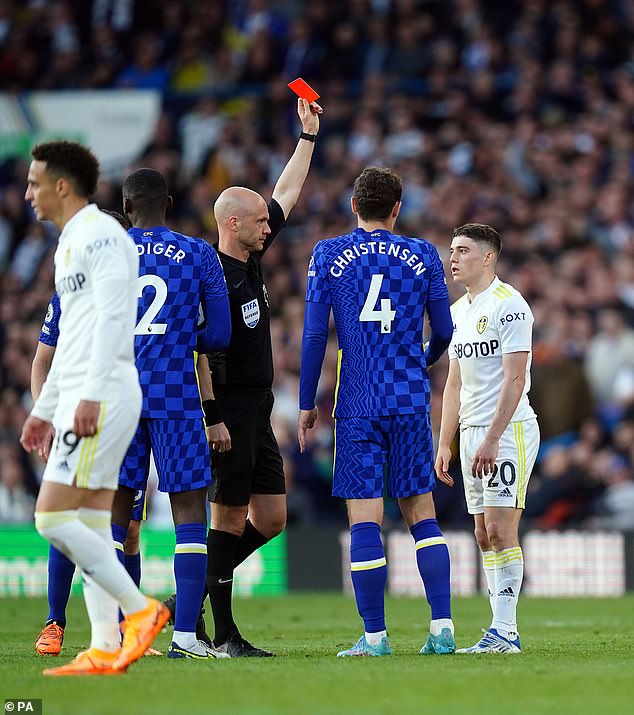 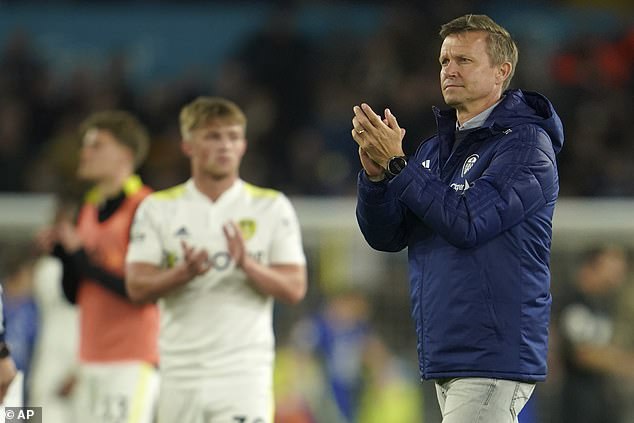 Leeds have seen their place in the top flight come under increasing pressure in recent weeks, with the side slipping below Everton and Burnley following two successive defeats.

Injuries are mounting at the West Yorkshire outfit as well as suspensions, with both Luke Ayling and James now confirmed to miss the rest of the season having been sent off against Chelsea and Arsenal respectively.

Leeds host Brighton this Sunday hoping to pick up what would be a crucial three points before their trip to Brentford on the final day of the season.