Dave Myers has made his first appearance on video since undergoing chemotherapy after being diagnosed with cancer in May.

The Hairy Bikers chef, 64, was seen with a newly bald head after undergoing treatment, as he filmed for his Agony Uncles podcast.

Sharing a clip of the show on Twitter, Dave wrote: ‘The debut of the baldy biker (getting told off by his wife). Happy Friday folks!! Brand new episode of the Agony Uncles is out.’

Dave appeared to be in high spirits as he told a cheeky tale of a cheap skiing holiday he had been on in his younger days when he ‘ended up with a German policewoman’.

Despite him whispering it to the camera, his wife Liliana could be heard interjecting from off-camera: ‘I heard that!’, leaving everyone in fits of laughter.

Dave also joked to his presenting partner Si King, 55, that his wife had likened him to ‘Stanley Tucci who’s been sleeping behind the library for a month’ without his trademark long hair. 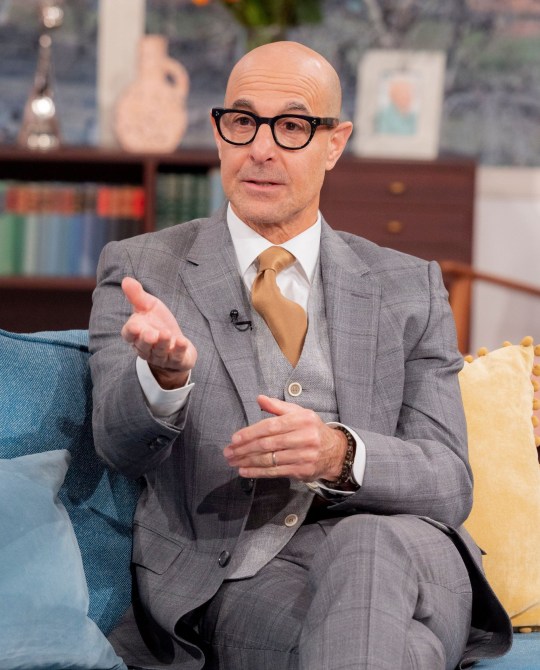 The chef also thanked his fans for their well-wishes after his cancer diagnosis, saying at the start of the show: ‘Thank you to everyone who has sent in a goodwill message to me.

‘I do appreciate the good thoughts. I’ll get there. As you can see, I’ve embraced the baldness. I looked at my wife and she said, “You look like Stanley Tucci who’s been sleeping behind the library for a month.”

‘As a great fan of Stanley Tucci, I’ve embraced that. I quite like it really. I’ve got the beard. Nice, fresh for the summer.’

He added that he was embracing the look, explaining: ‘It’s quite nice, getting in the shower just washing it… it started falling out so I said, “Mrs Myers, get those clippers out.”

‘Face adversity with courage. I quite like it actually. Thanks for asking. You’re a gorgeous mate.’

Dave is usually known for his long locks as part of the Hairy Bikers with Si King (Picture: hairybikers / Instagram)

Earlier in the week, Si had appeared on This Morning where he admitted it was ‘odd’ cooking without his good friend.

Si revealed: ‘He’s doing okay. He remains pretty positive and really focused on the treatment he is receiving.

Dave had revealed his cancer diagnosis on the podcast last week, saying: ‘Anyway Kingy, I’ve got to come clean now, I haven’t been too well recently and basically, I’ve got to have some chemo, you know all this anyway.

‘I have had to speak up about this because I don’t want to hide under a rock, but I would love it if people respected my privacy and just let me get on with it and give Si and our team all the support they need, that would be great. But look, the prognosis is okay, I’m going to be fine.’

He continued on the Agony Uncles podcast: ‘I’ve just got to tuck in, look after myself, eat sensibly and get over this mess, flog books, and be a happy person so within that, that’s where I am.

‘I may be a baldy biker for a while so it’s just a warning. I don’t want to make a fuss about it, I look alright bald actually.’

MORE : Hairy Bikers star Dave Myers battling cancer and undergoing chemotherapy: ‘I may be a baldy biker for a while’