Each week throughout the 2020-21 season, Sportsmail brings you a Power Rankings table, listing the top 10 hottest players in the Premier League.

As the stories of the season continue to unravel, the rankings provide a form guide with players moving in and out of the top 10 depending on both their performances in the previous fixtures and also in recent weeks.

With plenty to play for over the final weeks of the season, fans were treated to another dramatic round of action in the Premier League as the race for European football continues to hot up.

Manchester City are on the cusp of their third Premier League title in four seasons after a comfortable 2-0 victory at Crystal Palace, while Chelsea remain in control of the top-four race after beating Fulham at home by the same scoreline.

Furthermore, West Ham kept up their push for what would be a remarkable Champions League spot, overcoming Burnley away 2-1 while Tottenham remain in the frame following a routine win over already-relegated Sheffield United.

A number of standout displays were dished up from individuals once again over the course of the weekend – but which players from last week’s list will drop out and who will come out on top this time around?

If Manchester City didn’t have such a crunch Champions League clash against Paris Saint-Germain coming up on Tuesday night, Pep Guardiola’s side may as well have begun their title celebrations.

After City’s 2-0 win at Crystal Palace on Saturday, Guardiola’s men just needed Liverpool to get one over their arch rivals Man United at Old Trafford the following day for them to seal the title. However, after that fixture was postponed, they have to just wait that little bit longer.

City made wholesale changes at Selhurst Park with one eye firmly on the fixture against PSG as they look to book their spot in the Champions League final, and outgoing club legend Aguero was given the chance to lead the line.

And inevitably he delivered, making the breakthrough for City just before the hour mark before Ferran Torres doubled their lead just moments later.

And what a goal it was to break the deadlock. After Benjamin Mendy surged down the left before passing it across Palace’s penalty area, Aguero took the ball in his stride with an exquisite first touch before ruthlessly smashing home into the roof of the net, leaving Vicente Guaita with absolutely no chance. He will be sorely missed next season. 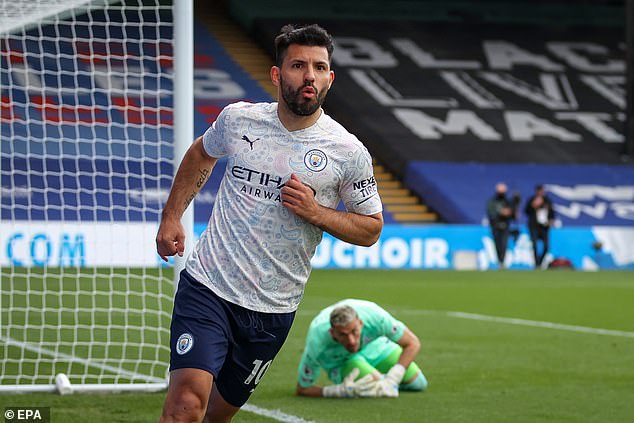 It has been a difficult season for Bale on his return to north London but following the departure of Jose Mourinho, he appears to have discovered a renewed sense of freedom in attack.

After netting a brilliant goal in the narrow win over Southampton a couple of weeks ago, the Welshman followed that up with a hat-trick against the already-relegated Blades in the 4-0 win.

His hat-trick came in the space of a scintillating 33 minutes for Tottenham while Son Heung-min also got on the scoresheet to complete the rout.

Bale, on loan from Real Madrid, put the hosts ahead on Sunday night with a brilliant chip over Aaron Ramsdale from a tight angle before emphatically smashing home from a one on one position.

He then put the icing on the cake with a left-foot hammer into the bottom right corner, leaving Ramsdale helpless. Bale knows it hasn’t been a great season by his standards, but he will be hoping he can make a huge difference for his side in the race for European football in the closing weeks. 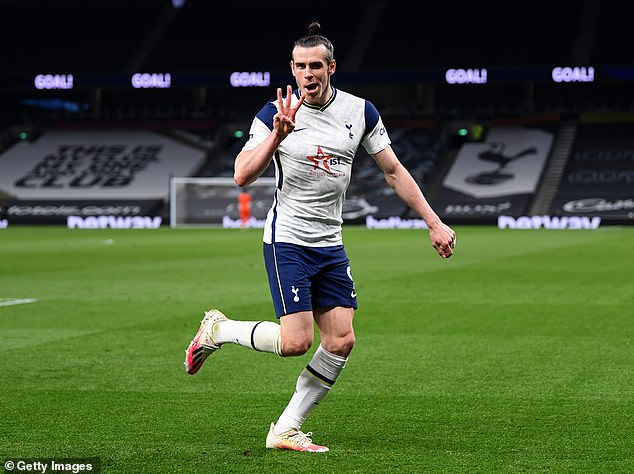 Soucek may have given the penalty away that led to Burnley’s opener with a clumsy challenge but yet again he was everywhere for West Ham on Monday night.

After Chris Wood put Burnley ahead from the penalty spot at Turf Moor in the 19th minute, the Hammers responded in style to keep their astonishing Champions League hopes alive.

But without Soucek dominating the midfield, who knows whether West Ham would have walked away with all three points against Sean Dyche’s men.

The Czech Republic international worked tirelessly for his team-mates, winning a massive 17 aerial duels throughout the 90 minutes at Turf Moor.

And that figure was a record for any player in a Premier League match this season. Soucek’s tally alone was larger than what Aston Villa, Burnley, Leeds, Tottenham, Newcastle, Fulham, Arsenal, Chelsea, Everton and Sheffield United managed in their matches over the weekend. 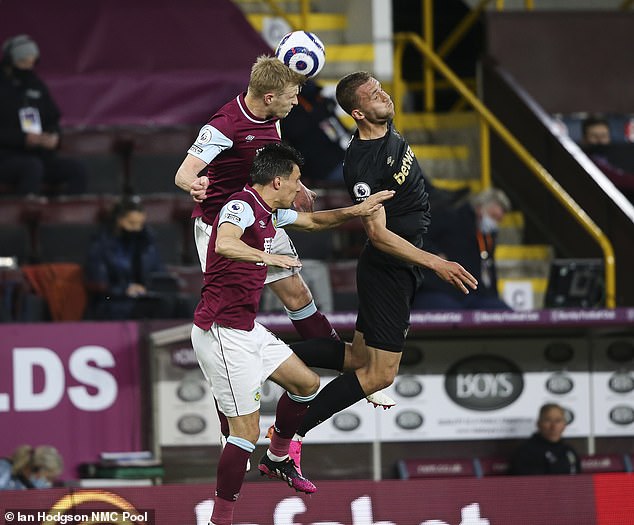 Another player who has endured a tough season following his mega-money £89million move from Bayer Leverkusen in the summer. Much was expected of the German star but he has yet to deliver on a consistent basis for Chelsea.

However, he is slowly but surely starting to find signs of life at Stamford Bridge and Saturday’s victory over west London rivals Fulham proved just that.

Havertz played a starring role recently in Chelsea’s thumping win at Crystal Palace, and he stepped up once again against Fulham as Thomas Tuchel’s men remained in control in the race for Champions League football.

And it was his brilliant movement that made the difference against a Fulham side destined for the drop, scoring both of Chelsea’s goals in either half.

Havertz latched onto Mason Mount’s clever pass for Chelsea’s opener before making another clever run from Timo Werner’s ball to double the lead and put the result beyond doubt. He has eight goals and as many assists in 40 matches this term, but he will be expecting much more from himself next season. 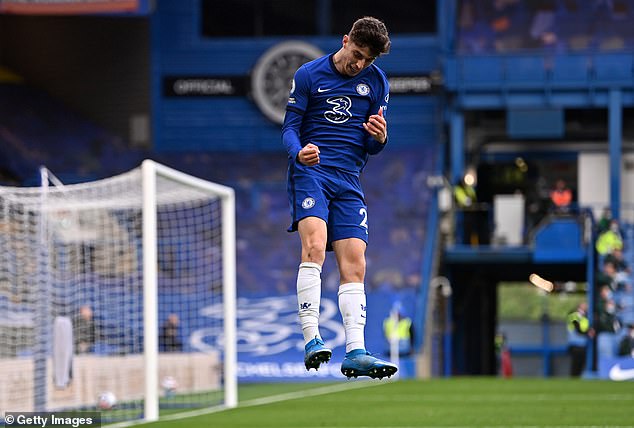 Son continued his impressive form for Tottenham in their thrashing of Sheffield United, and once again proved a real nuisance throughout for the opposition.

The South Korean, another Spurs player given a new lease of life after the departure of Mourinho, produced lung-bursting runs throughout at the Tottenham Hotspur Stadium and would have felt hard done by that he didn’t score more.

Son finished off proceedings with a trademark curling finish off the post from the edge of the penalty area, which Ramsdale could do nothing about in the Sheffield United net.

But early on in the second half in north London, Son thought he had scored an excellent goal. From the heart of defence, Toby Alderweireld produced an on-point delivery straight into the path of the forward, who took the perfect touch before showing his composure to ruthlessly smash home.

Unfortunately for Son, his goal was disallowed by VAR for offside but it didn’t come back to haunt Tottenham. Just like Bale, the South Korean will hope to make the difference for his side as they chase an unlikely top-four finish with just four games remaining. 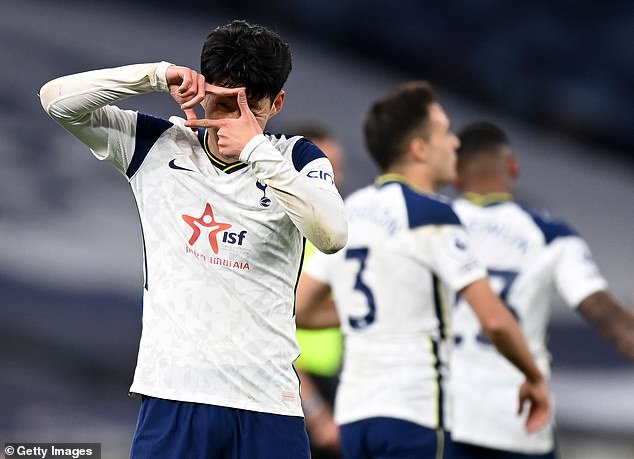 Iheanacho has been in fine form for the Foxes in recent weeks, firing them into the FA Cup final and putting them on the brink of Champions League football for next season.

However on Friday night, the Nigerian striker had a mixed evening on the south coast at Southampton as Leicester stumbled to a 1-1 draw against Ralph Hasenhuttl’s 10 men.

After Jannik Vestergaard was controversially sent off in the 10th minute, Leicester thought they were in the driving seat but it didn’t turn out that way for Brendan Rodgers’ side.

Iheanacho was the guilty party as his handball in the area led to Southampton’s opener from the penalty spot. Stuart Armstrong’s powerful effort struck the striker on the arm, and after a VAR check, the spot-kick was given.

However, he popped up with the goods to get Leicester back on level terms with a superb cross straight into the path of Jonny Evans who had the simple task of heading home from just a few yards out. 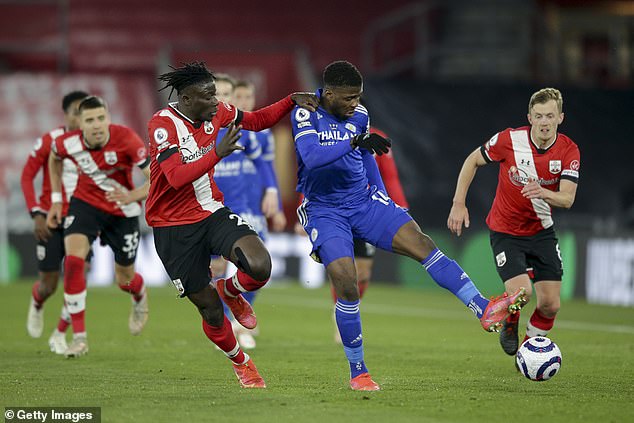 Antonio returned for the first time in four weeks for West Ham following his recovery from a hamstring injury, and his recovery comes at the perfect time for David Moyes’ men who are looking to pull off the unthinkable and claim their place among Europe’s elite next season.

After the worst possible start at Turf Moor, it was Antonio who stood up for the Hammers, getting onto the end of Vladimir Coufal’s cross to head home emphatically at the back post.

The 31-year-old’s performance, although he spurned some opportunities in the second half, highlighted the importance of having someone with a well-rounded knowledge of leading the line.

His return will hugely excite Hammers fans as they hunt down a top-four finish and his relationship up top with Jesse Lingard could prove the difference for the club. 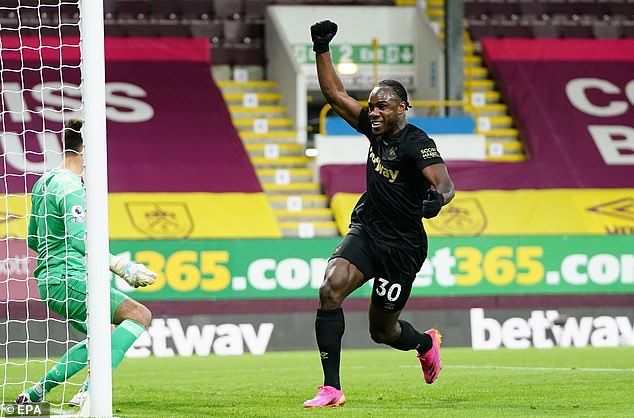 3. Bruno Fernandes (Manchester United – DOWN ONE)

Not much to be said regarding Fernandes after Manchester United’s match against old foes Liverpool at Old Trafford was postponed on Sunday following the protests from Red Devils fans against the Glazer family.

But the Portuguese star remains near the very top of this list thanks to his starring role for Ole Gunnar Solskjaer’s side, who are looking to consolidate their position as the best of the rest in the Premier League behind neighbours City.

Fernandes shone in the recent 3-1 home victory against Burnley and will surely be United’s go-to man before the season is out as they also eye glory in the Europa League.

He has transformed United’s fortunes and sits joint-third with Son in the Premier League scoring charts this season with 16 goals, despite playing in midfield.

The former Sporting Lisbon star is also second in the assist charts with 11 to his name, with only Tottenham’s Harry Kane ahead of him with 13. 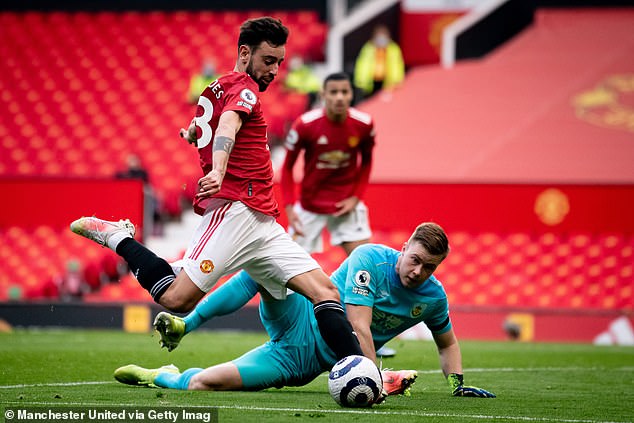 It is so impressive how Mount has established himself ever-so quickly as one of Chelsea’s most important players.

The young England international is leading the way for the Blues in their pursuit of Champions League glory and a top-four finish come the end of the season.

Question marks were raised following Tuchel’s arrival over how Mount would fit in, but he has answered those critics brilliantly and once again at the weekend was the difference for the Blues.

Mount laid it on a plate for Havertz to put Chelsea 1-0 ahead against Fulham at Stamford Bridge on Saturday evening but it was his touch before the assist that got everyone talking.

Thiago Silva launched a long ball forward and Mount made it his own with an exquisite first touch plucked out from the air before calmly rolling a through ball into the path of his German team-mate.

The midfielder continues to dictate the tempo of the game for Chelsea and his willingness to always get on the ball is making a huge difference for the west London outfit. 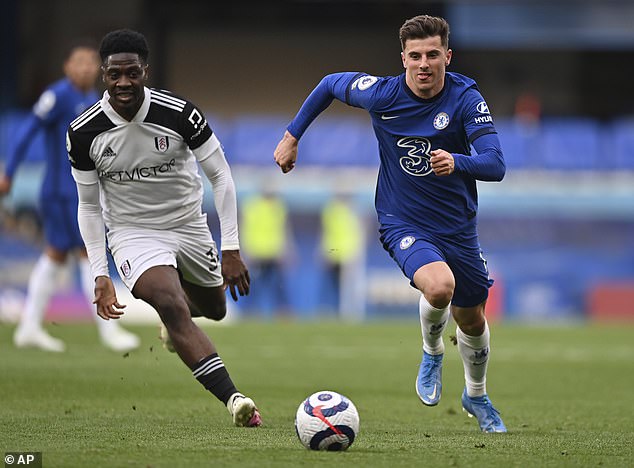 Lingard has rediscovered his mojo following his loan arrival to West Ham from Manchester United, and the England winger is picking up his form at the perfect time ahead of this summer’s Euros.

And while he didn’t directly prove pivotal for West Ham against Burnley on Monday night, he still spearheaded a West Ham side who produced another great performance in what has been an outstanding campaign.

Lingard looked to get on the ball and in behind Burnley’s defence whenever he could, and it’s his direct style of play that has taken West Ham up a level in their pursuit of the Champions League.

He remains the Premier League’s most in-form player, scoring nine goals and producing four assists in just 12 Premier League matches since joining on loan from Old Trafford in January.

If Lingard can fire West Ham into the top four come the end of the season, he will have written his name into the history books at the London Stadium. 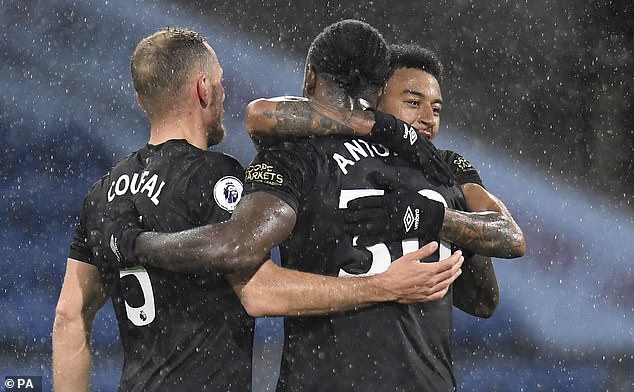