Well, we can only imagine Boris Johnson’s excitement when he learns Peppa Pig is heading back to the West End.

In news released today, which is of the most brilliant timing seeing as Mr Johnson’s mention of the fictional character during a recent interview has the country abuzz, and Holly Willoughby suggesting the leader is perfect for a voiceover role, it was announced Peppa and Friends would return to the stage for a limited festive run.

From December 2, 2021 to January 2, 2022, Peppa Pig’s Best Day Ever!, the latest live show based on the animated TV series is pausing its UK and Ireland tour over the holiday season to hop on a sleigh into the capital.

Celebrating its 10th season in the West End, the show will run at Theatre Royal Haymarket for a major 48 performances of which, we can only assume, the Prime Minister will be sat front and centre lapping it all up.

This is all just splendid news for Peppa’s fans, such as Mr Johnson, who caused a rumble following a keynote speech to the Confederation of British Industry (CBI) earlier this week, in which he praised Peppa Pig World, which he visited with his son Wilfred, saying how much he ‘loved’ the children’s attraction. 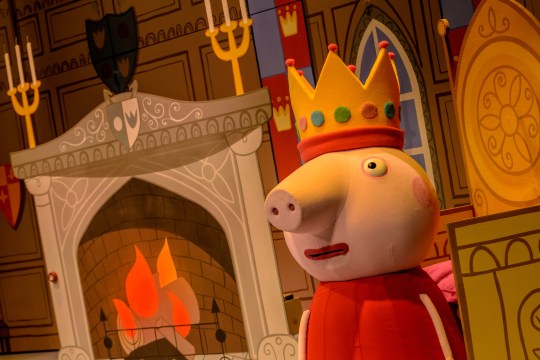 Peppa is back on the West End (Picture: Dan Tsantilis)

Some have suggested he made a pig’s ear of his ‘rambling’ address on Monday morning, telling those gathered how he ‘loved’ the Hampshire children’s attraction despite the cartoon character resembling a ‘Picasso-like hair dryer’.

He appeared flustered after losing his place during the talk, muttering ‘forgive me’ three times (much to Ant and Dec’s amusement) as he leafed through his papers while the audience sat in awkward silence, before eventually continuing around 30 seconds later.

Later the PM was forced to defend his performance, with one reporter quizzing him: ‘You lost your notes, you lost your place, you went off on a tangent about Peppa Pig – frankly, is everything ok?’

He insisted: ‘I thought it went over well.’