James Argent shared some pictures from Geordie Shore star Gaz Beadle’s to wedding to Emma McVey on Instagram on Monday.

Arg, 33, who acted as wedding singer, shared some gorgeous photos from the special day with his microphone still in-hand alongside a heartfelt message.

He wrote told the happy couple via social media: ‘Gary & Emma tie the knot ❤️ It was an honour to be your Wedding singer, I had so much fun.’ 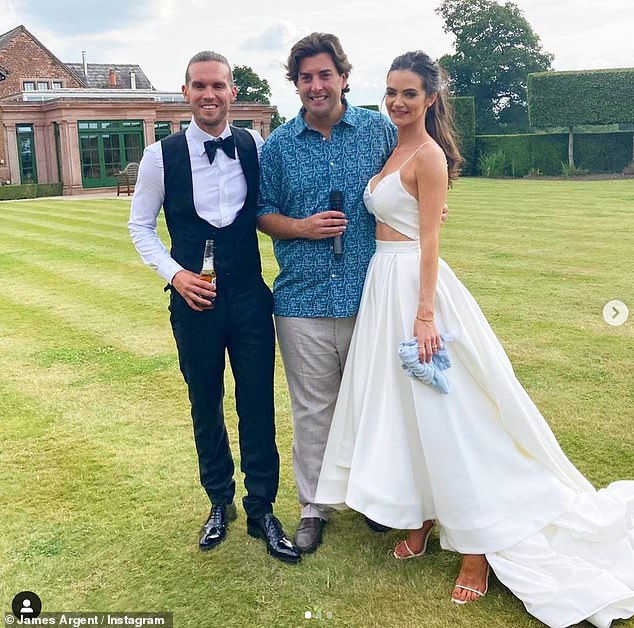 ‘It was an honour to be your wedding singer’: TOWIE’s James Argent shared a picture from Geordie Shore star Gaz Beadle’s wedding to Emma McVey on Instagram on Monday

Arg affectionately continued: ‘Emma you looked stunning, You both have such lovely family & friends. Congratulations & good luck to the pair of you.’

Emma looked gorgeous as she posed for the snaps in a plunging white dress with a midriff-baring cut out detail and a long elegant train.

The TOWIE star pulled the bride in for a hug after the ceremony as they celebrated the special day together.

Arg looked happy and healthy at the wedding party as he chatted to Gaz in a blue short sleeved shirt and chinos. 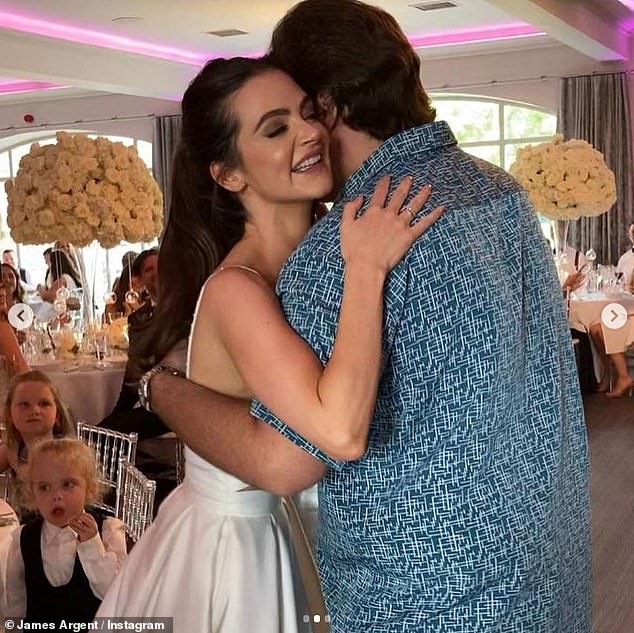 Congratulations: The musically gifted TOWIE star pulled Emma the bride in for a hug after the ceremony as they celebrated the special day together

The reality star couldn’t help but beam on the happy day as he joked around with the groom who cut a dapper figure in a black bow tie and a man bun.

Gaz married Emma with their children Chester, three, and Primrose, 18 months in attendance in Cheshire and just 90 other people in attendance.

The ceremony is said to have left the children in tears, feeling ‘overwhelmed’ seeing their parents tie the knot. 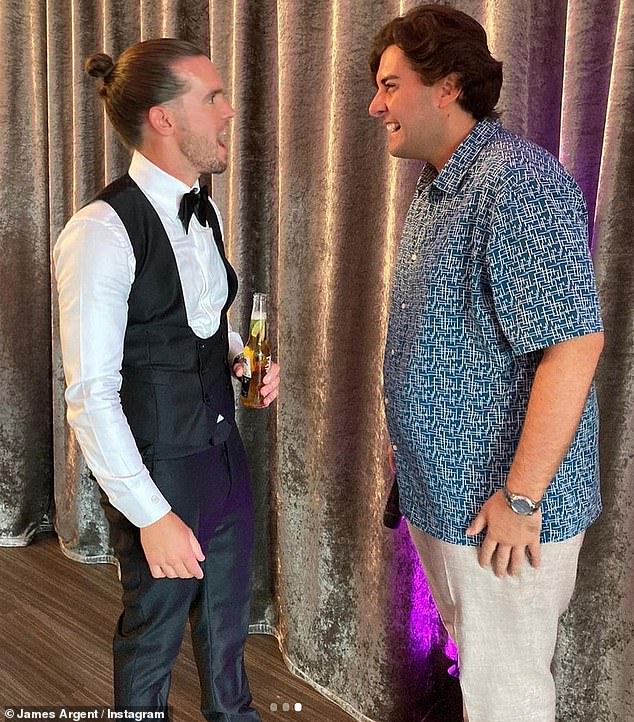 Pals: Arg couldn’t help but beam on the happy day as he joked around with the groom who cut a dapper figure in a black bow tie and a man bun

Emma told OK! magazine: ‘The whole event was a bit overwhelming for Chester and Primrose. They’ve not been in an environment with so many adults before, especially with lockdown and everything.

‘They were supposed to walk down the aisle with my man of honour, Joe, but they were struggling with it, so in the end Prim was carried by my dad, who gave her to Gary, and I carried Chester, who was a little upset, up the aisle.’

Gary asserted that they wouldn’t have wanted a wedding any other way.

‘We had to. Remember, because of the last 18 months, they’ve only ever known our house and their nurseries, so it’s not normal for them,’ he said. ‘And we’re not the sort of people who would leave them with others if they’re crying. 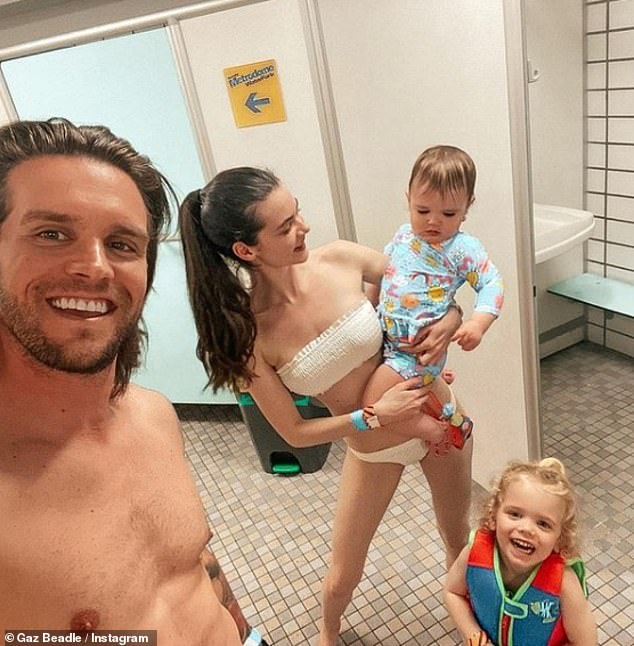 Family affair: And the ceremony is said to have left the youngsters in tears, feeling ‘overwhelmed’ seeing their parents tie the knot

The couple have been together for five years and became engaged in 2019.

Emma celebrated her hen night in Manchester last month, seen in a bejewelled sailor’s hat stamped with the word ‘bride’. The mother-of-two was also carrying an inflatable penis as she enjoyed a fun-filled night on the town.

Gaz previously told how the couple would likely be tying the knot in July. 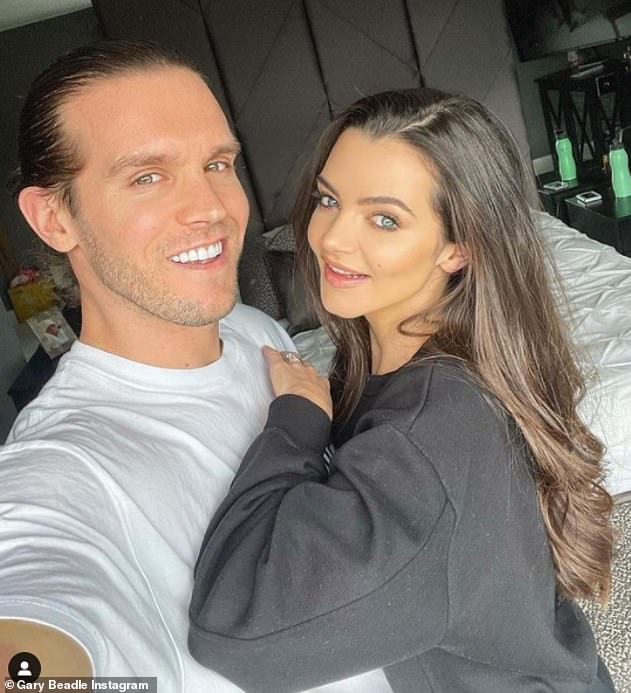 Health: It comes after Emma revealed she is undergoing heart procedure after recently finding out she has a heart condition

When asked if they would get married this summer, he told his Instagram followers: ‘July is looking ok for restrictions etc.’

The nuptials come after Emma revealed she is undergoing a surgical procedure after finding out she has a heart condition.

Taking to Instagram in April, Emma revealed the condition when she was asked by a follower how she manages to stay thin while eating chocolate.

‘I have a heart condition that we recently found out about that has a lot to do with it. I wouldn’t choose to be this thin I would love a bum and some curves!’

Later, Emma said she is due to have an angiogram but does not have a date yet.

She wrote: ‘I am. My next appointment is a dye into my arteries. Just googled it’s called an angiogram.

‘Honestly my head is baffled at the moment with it all. But I will update when I have a date etc’.

An angiogram is an X-ray procedure that evaluates blockages in the arterial system. 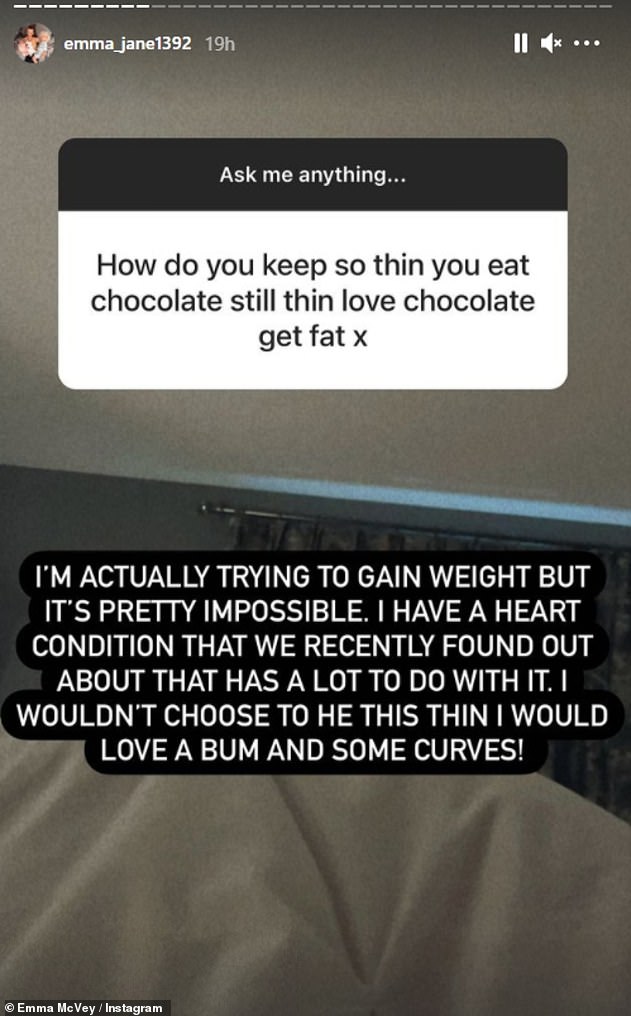 Condition: Taking to Instagram, Emma revealed the condition when she was asked by a follower how does she manage to stay thin while eating chocolate