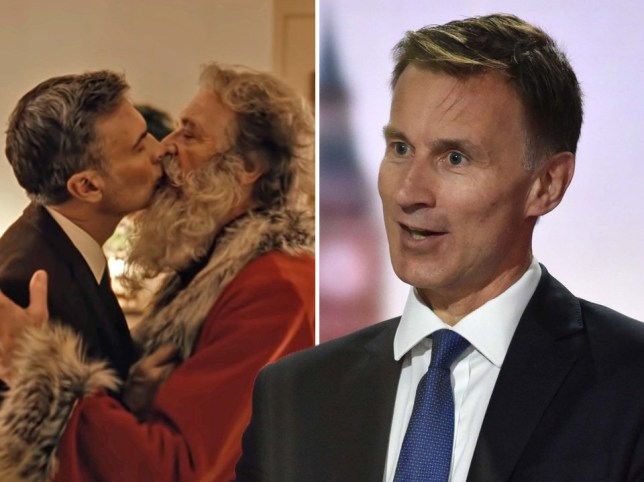 Jeremy Hunt, is that you? (Picture: Posten; PA)

Jeremy Hunt has responded to his startling resemblance to Santa Claus’ boyfriend in easily the best Christmas advert of the year.

Titled When Harry Met Santa, the advert sees Mr Claus catch the eye of Harry who patiently waits 364 days of the year for his true love to come down the chimney.

Eventually, Harry writes his wishlist to Santa, telling St Nick that actually ‘all I want for Christmas is you’, before they kiss and we can only assume they love happily ever after.

However, fans of the ad were unnerved after realising Harry had a striking resemblance to Mr Hunt.

‘Why is Jeremy Hunt kissing Santa Claus?’ despaired one fan, while another gasped: ‘Blimey, in the Santa advert I thought he was blooming kissing Jeremy Hunt. Lol. Come on we cant be having that.’

A third, desperate for the advert not to be tarnished, asked the MP: ‘ Don’t ruin this, Jeremy.’

Others, however, were in stitches over the resemblance, with someone else posting: ‘Good for you! What a wonderful seasonal message to be accidentally woven into. Just beautiful.’

Honestly, we’re not convinced but Mr Hunt appeared to agree, tweeting: ‘I must have a long-lost brother in Norway.’

The advert has received an outpour of love from viewers, with many UK supporters wishing there was a similarly powerful sentiment shared here.

‘The tradition has been to look at Christmas with a slight slant in the previous two years,” Monica Solberg, Posten’s marketing director, told LGBTQ Nation.

‘Posten is an inclusive workplace with great diversity, and we would like to celebrate the 50th anniversary with this fine love story.

‘In last year’s campaign, Santa was angry at Norway Post, which took away from him the ‘business’ – this year, Santa is happy that Norway Post can relieve him a little, so that he can be with the one he loves.

Do you see the resemblance? (Picture: Posten)

‘As always, the main goal of the campaign is to show that Norway Post never stops renewing itself. In addition to showing the flexibility of our services, we want to put it in a socially relevant setting, with themes that are important for the society around us and for us at Norway Post.

‘There will certainly be some negative reactions from some environments, but we are prepared to deal with that. The right to love whoever you want is a fundamental human right, and is not considered a political issue in free democratic societies in 2021.

‘Norway Post has connected people for 375 years, and will continue to do so regardless of orientation or gender identity.’