Jessica Alves was a vision in green as she put on a busty display in an extreme plunging green gown with thigh-splits in South London on Sunday.

The transgender television personality, 37, who recently revealed she’s lost a kilo a day since undergoing gastric sleeve surgery in Turkey last month, posed up a storm outside the Varanda Cocktail Bar in Crystal Palace.

Jessica styled her incredibly long blonde hair on her shoulders with it skimming the top of her thigh as she headed inside the venue.

Making the most of herself: Jessica Alves, 37, was a vision in green as she went underwear free in a plunging green dress for a night out in Crystal Palace on Saturday

The star’s ensemble featured a plunging neckline which left plenty of skin on show and she wore a mirrored silver belt to cinch in her waist and accentuate her curves.

She wore a pair of vivid green stacked platform shoes to match her dress and add a few inches to her stature.

Jessica clutched a black handbag as she stood outside the venue, opting for a striking look with her make-up to enhance her facial features. 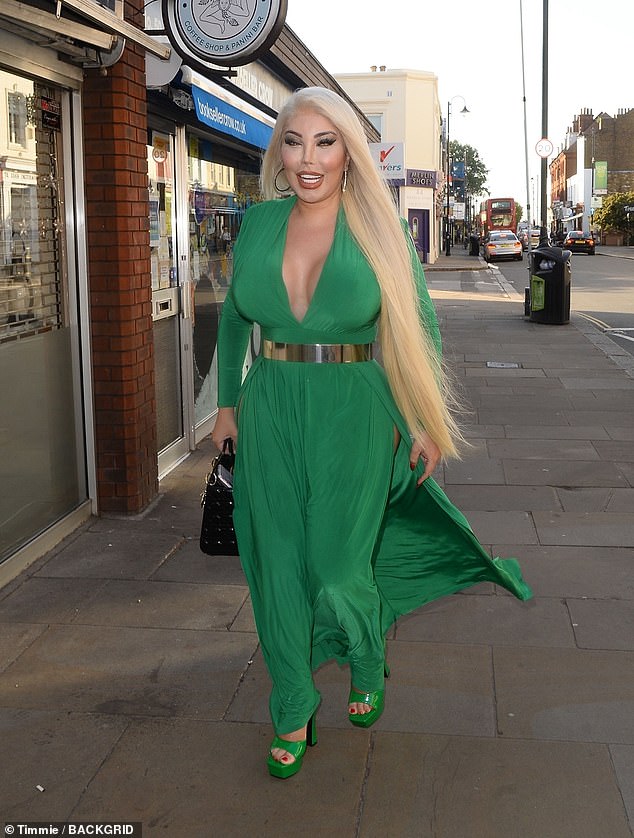 Beaming with pride: Jessica smoldered as her incredibly long blonde hair rested on her shoulders and thigh, perfectly framing her pretty face and assets

She topped off her appearance with some green contact lenses and accessorised with a pair of simple but noticeable hoop earrings.

Jessica looked delighted to be out and about, beaming as her dress flowed in the calm breeze behind her as she walked.

The social media influencer made sure to share some pictures of herself with her 1.2million Instagram followers before her outing, ensuring she made an impact with her pose. 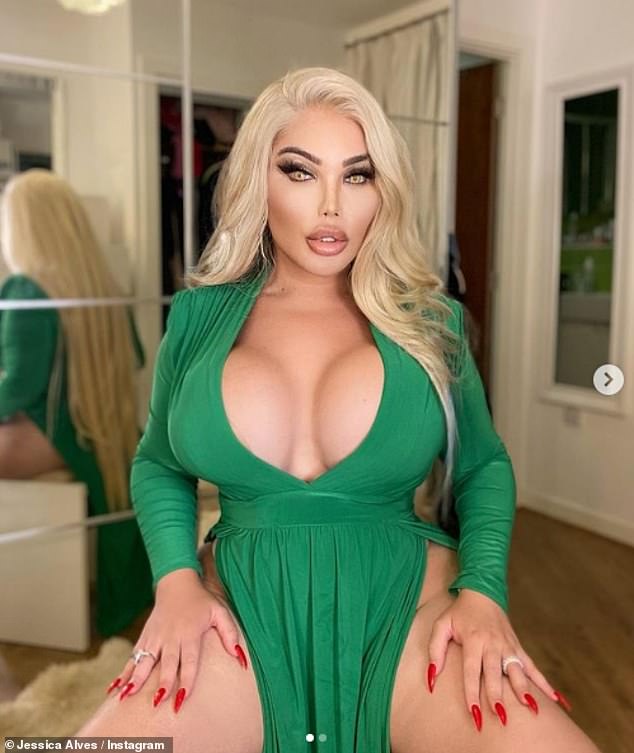 Strike a pose: The social media influencer made sure to share some pictures of herself with her 1.2million Instagram followers before her outing, ensuring she made an impact with her pose

She could be seen perched on a stool with her legs astride, with a strategically placed panel of material to protect her modesty.

Jessica rested her hands on her legs, displaying her red painted nails as she pouted for the camera.

She boldly made the most of her voluptuous figure, captioning her post: ‘Confidence is everything. Confidence is what makes that simple green dress look good.’ 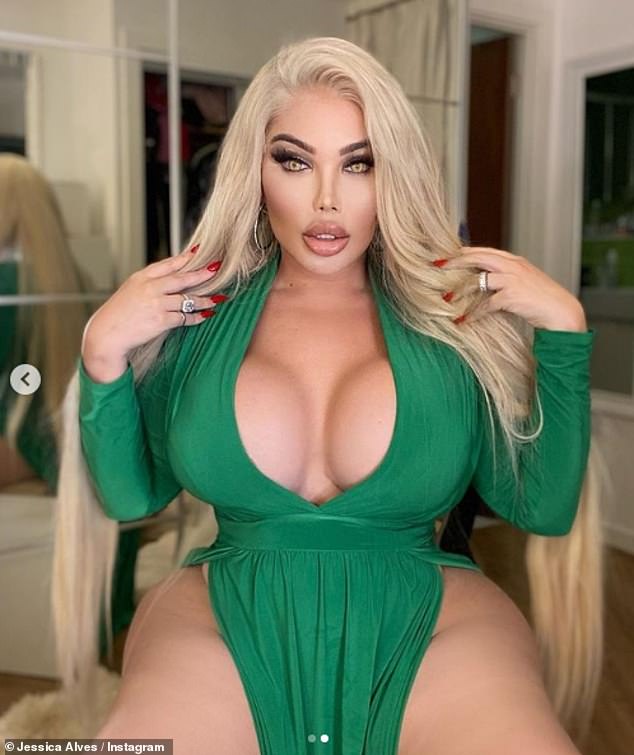 Working it: Jessica could be seen perched on a stool with her legs astride, with a strategically placed panel of material to protect her modesty

Jessica’s appearance in London comes after she underwent gastric sleeve surgery in Antalya, Turkey last month. She opted for the procedure after reaching 16 stone and admitting she struggled to lose weight.

Speaking exclusively to MailOnline after the operation, Jessica revealed she was losing ‘a kilo per day’.

‘I had gastric sleeve surgery due to the fact that I was 102 kilos (16 stone) and my diet wasn’t working,’ she explained. 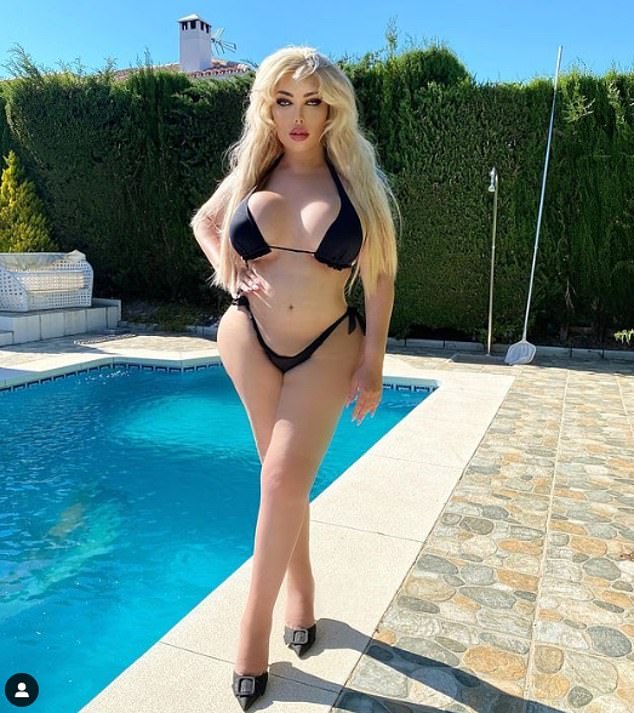 Jessica flew to Turkey to have the surgery, after having a breast enlargement to increase her cup size to a H.

Gastric sleeve surgery is a weight-loss procedure which reduces the size of the stomach by surgically removing a large portion of it – Jessica claims she now only has ’20 per cent’ of her stomach left following the operation.

Hailing her gastric sleeve as the ‘best things she’s ever done’, Jessica added that she ‘no longer craves food’.

In three months time, Jessica claimed she should be able to see ‘drastic results’.

‘Obviously the biggest hunger will be removed from the stomach and when I’m thinner I’d like to be a glamour model and explore my femininity.’ 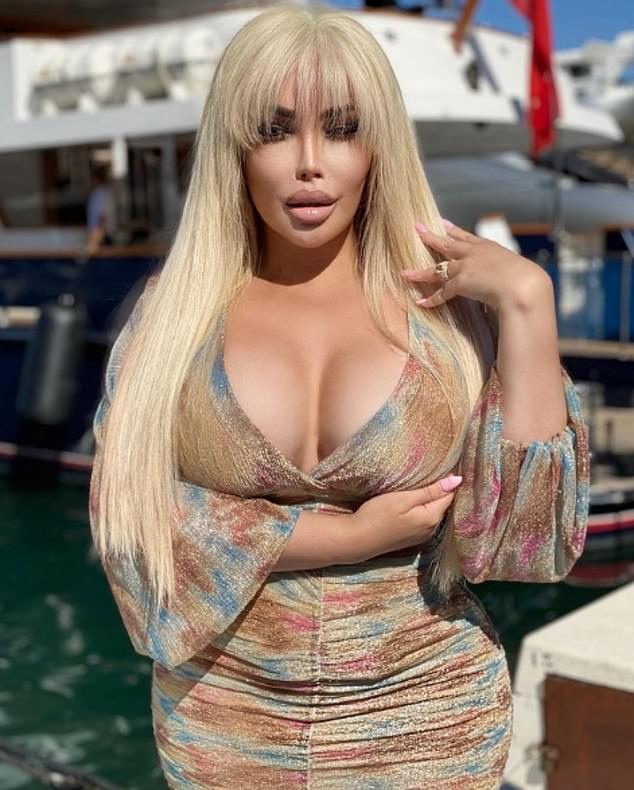 Curvaceous: Jessica claims she now only has ’20 per cent’ of her stomach left following her operation