The budding actress gushed over her famous dad, who is best known for his hit films Saturday Night Fever and Pulp Fiction.

‘Happy Father-Daughter Day to my hero, my best friend. I love you so much Daddy❤️❤️❤️,’ wrote the 21-year-old star in her caption for her Instagram post. 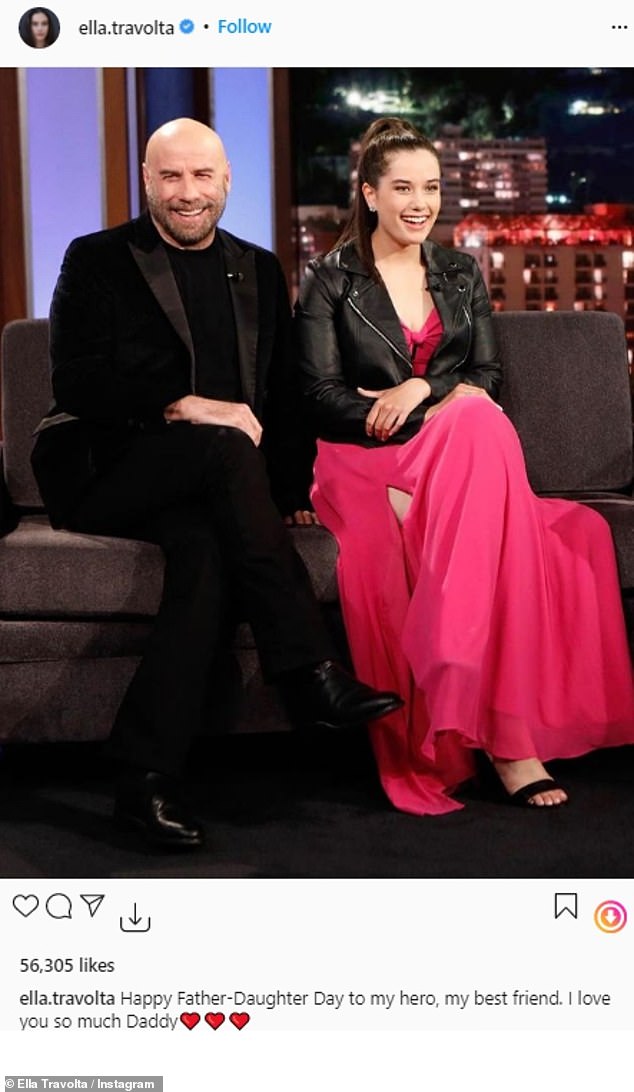 She loves her pops: John Travolta and Kelly Preston’s daughter Ella took to social media on Father-Daughter day. The budding actress gushed over her famous father, who is best known for his hit films Saturday Night Fever and Pulp Fiction

In the image John and Ella were side by side while on a TV show. She wore a black jacket over a hot pink dress while dad had on all black.

He shared the same image as he wrote a note for his girl.

‘Happy Father–Daughter Day Ella! I love you more than words can express!’ said the actor.

Rocker Sammy Hagar noted: ‘Come on now John Get back to Cabo I’m heading down there tomorrow for a couple weeks.’

It has been a tough year for John and Ella as they lost Kelly Preston a year ago. She was wed to John for 29 years.

He shared a note as well: ‘Happy Father–Daughter Day Ella! I love you more than words can express!’ said the actor

The Urban Cowboy actor, 67, recently appeared on Kevin Hart’s talk show Hart to Heart and told the comedian about how he had to discuss mortality with his 10-year-old child Ben following his spouse’s death.

The actress passed away in July of 2020 after undergoing treatment for breast cancer.

Travolta pointed out that his son broached the topic during a conversation and expressed that his child was very honest about his feelings.

The star recalled that Ben ‘said to me once, “Because mom passed away, I’m afraid you’re going to.”‘

The performer pointed out that he and his wife were two different individuals and attempted to explain the situation to his son.

‘I said, “Well, it’s a very different thing.” And I went through the differences about my longevity and her limited life,’ he recalled. 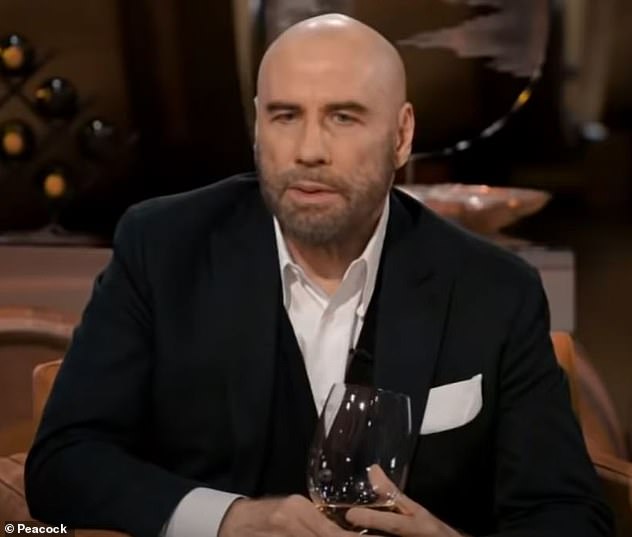 Being honest: John spoke about having to discuss mortality with his son Ben after Kelly Preston’s passing during an August episode of the talk show Hart to Heart 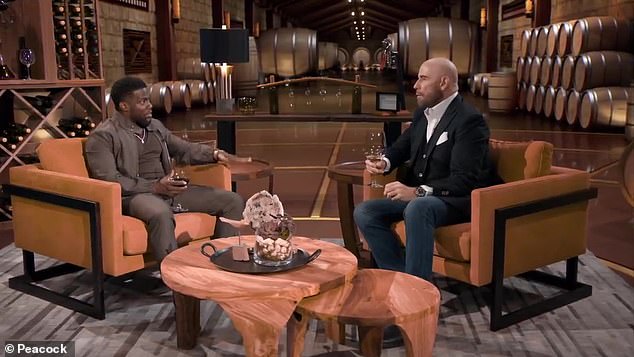 Tough topic: The Pulp Fiction actor recalled that his son wanted to discuss death following the death of the actress in 2020 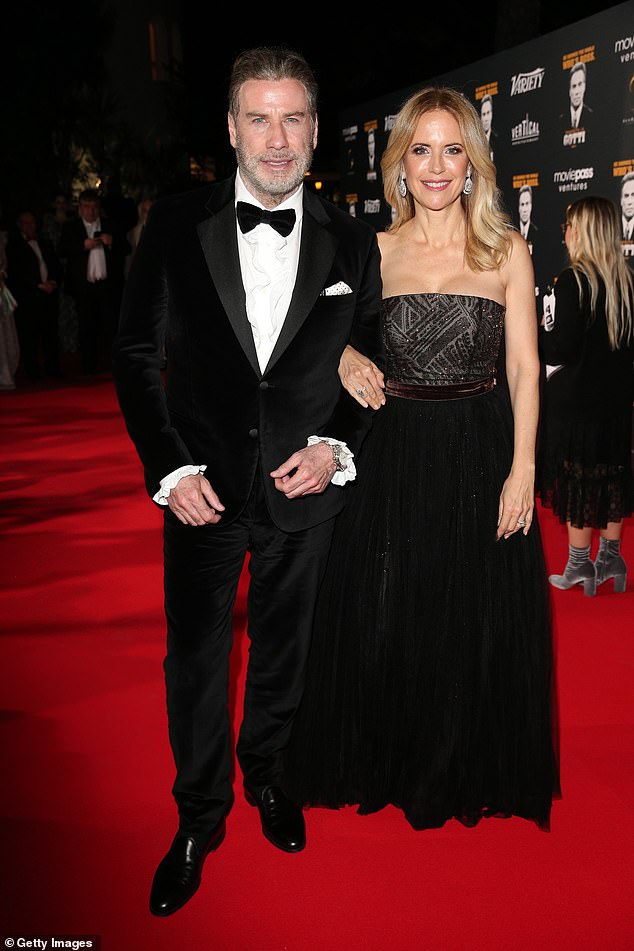 Talking it out: Travolta told Hart that he ‘went through the differences about my longevity and her limited life’ with his son; he is seen with Preston in 2018

Travolta then told Hart that he had to explain the challenges of living with grief to his son, which he attempted to do in an easy-to-understand manner.

The star then told his son to keep his chin up and to embrace loss as part of living, as he had already done so.

He told Ben: ‘”I could die tomorrow. You could. Anybody can. So let’s look at it like it’s part of life. You don’t know exactly. You just do your best at trying to live the longest you can.”‘ 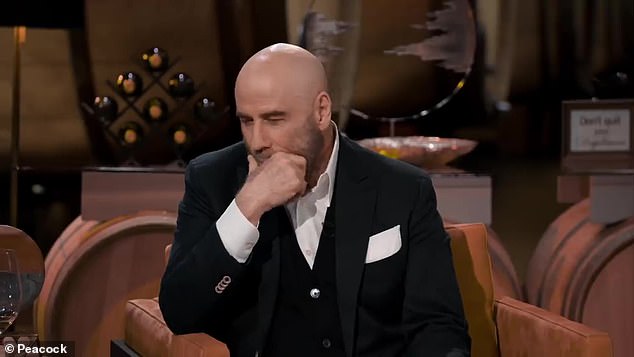 Being supportive: Travolta told his son to not worry about death and keep on living as best as he could

Travolta also spoke about how Ben was interested in how his father viewed his life going forward.

The actor then pointed out that Ben’s response to his statement was unexpectedly positive and that he was impressed with his son’s maturity.

‘He said, “What’s wrong with that?” This is a 10-year-old telling me that! It changed my viewpoint,’ Travolta said.

The actor and Preston were initially romantically linked in 1989 after they met during a screen test for the comedy film The Experts.

The pair moved quickly with their relationship and went on to become engaged and tie the knot in 1991.

Travolta and his wife welcomed their first son, Jett, the following year and added their daughter Ella and Benjamin to their lives in 2000 and 2010, respectively. 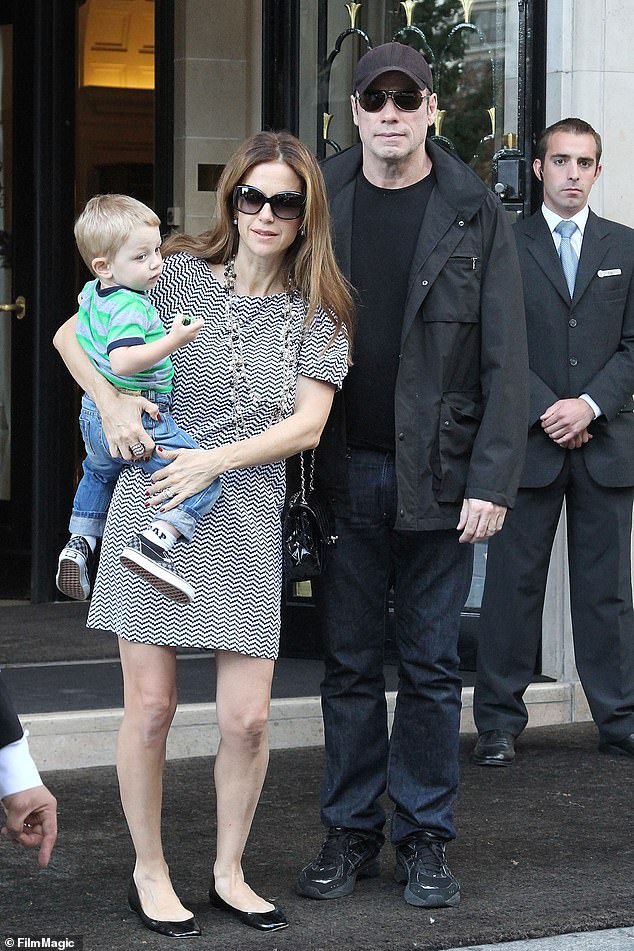 Working together: The former couple originally met while working on the 1989 comedy feature The Experts, in which they appeared; they are seen with Ben in 2012

Tragedy struck the family in 2009 when the couple’s oldest child passed away during a vacation in the Bahamas.

The family stayed together for just over a decade before Preston died as a result of complications from breast cancer.

Ella has been staying busy with her career. In September she shared images from her latest film Get Lost.

The film is a modern-day re-imagining of Alice In Wonderland where the creatures are turned into human characters, according to Deadline.

In one image she also posed with her father, who is best known for his films Grease, Saturday Night Fever, Pulp Fiction and Face/Off, on the set in Budapest. 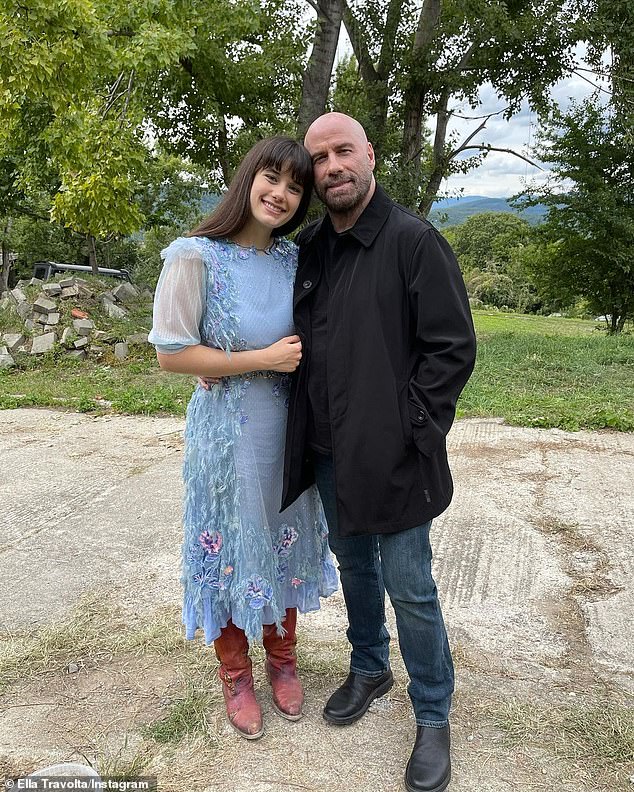 Supportive father: Ella has followed in her famous parents footsteps by taking up acting. Here she is seen on the set of Get Lost, a modern-day re-imagining of Alice In Wonderland

The brunette looked thrilled to be on set as she shared an image with dozens of balloons.

And the budding star was also seen with her cast mates. In another shot she seemed to be posing with her younger brother Benjamin.

‘And that’s a wrap on “Get Lost”!!! This has been such an incredible experience. Budapest has been a dream and most importantly I’ve gotten to meet and work with so many amazing people,’ said the beauty.

‘Thank you so so much to all of the cast and crew who worked so hard on this film and brought everything to life so beautifully. 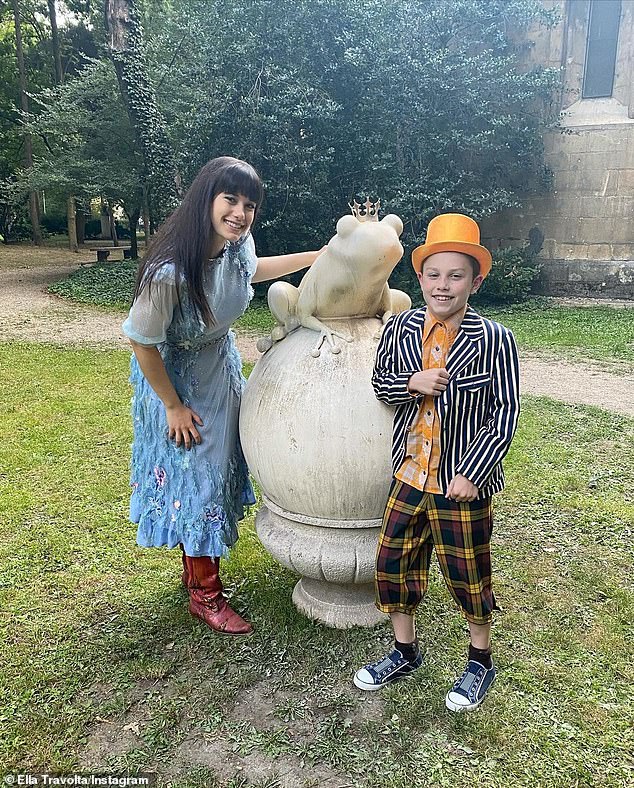 The set looks sweet: ‘And that’s a wrap on “Get Lost”!!! This has been such an incredible experience. Budapest has been a dream and most importantly I’ve gotten to meet and work with so many amazing people,’ said the beauty; here she seems to be with her brother Benjamin

‘Thank you to our wonderful director, Daniela, for your kindness and guidance always. And to our stellar producers, for everything you do.✨#aliceinwonderland.’

In July she recorded a video where she said she was thrilled to be on the film.

‘I am so honored and happy to begin this adventure on such a wonderful project with such an amazing cast and crew. Stay tuned… @get_lost_the_film #aliceinwonderland,’ wrote Ella in her caption.

Her last movie was The Poison Rose.