It was a big weekend as the Television Academy’s 2021 Creative Arts Emmy Awards were underway in Los Angeles at LA Live.

And it served as a great opportunity for a double date for two famous home improvement experts and their lucky ladies.

Jonathan Scott was seen with girlfriend Zooey Deschanel as his twin bother Drew took Linda Phan at the Sunday event. 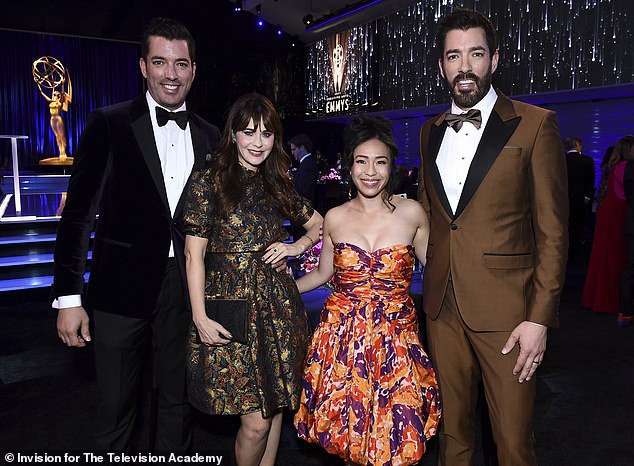 In July Zooey said thinks it’s hard for stars to find love because of ‘preconceived notions’ about them.

The 41-year-old actress – who has been dating Jonathan for two years – can understand why celebrities can find it hard to date someone who isn’t also famous because life in the public eye can be difficult to comprehend.

Asked why she thinks celebrities find dating difficult, she told Extra: ‘I think people have preconceived notions of well-known people. I think it’s really hard to shake those preconceived notions, especially if they’re dating somebody who doesn’t know firsthand the things that go along with notoriety.’ ​

While Zooey and co-host Michael Bolton are helping stars find love on The Celebrity Dating Game, the New Girl actress insisted it wouldn’t be something she’d be keen to do if she wasn’t in a relationship.

Asked if she’d be a contestant if she was single, she said: ‘No, definitely not. I loved hosting it, but no.’ 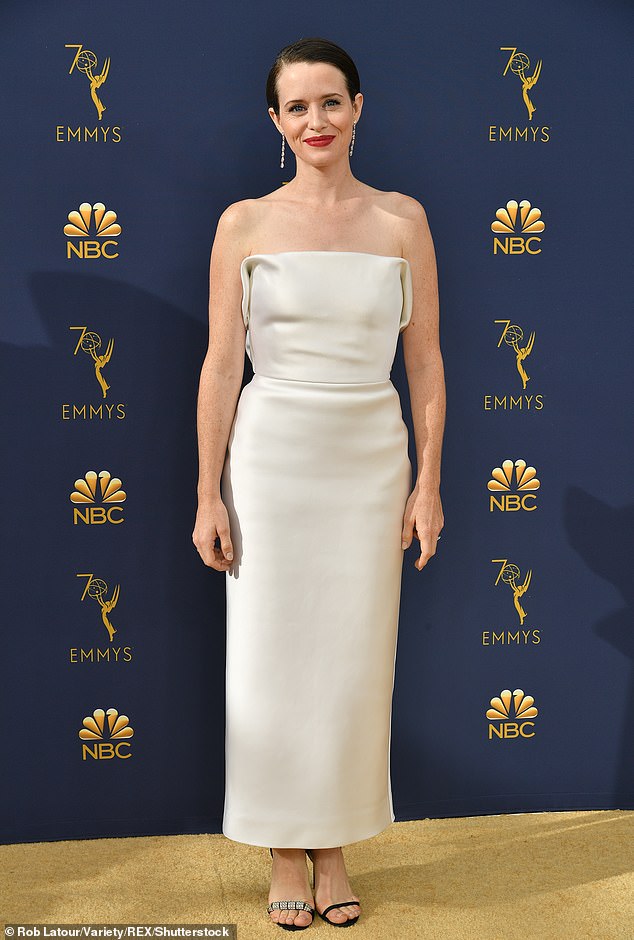 Bravo: Claire Foy has won a Creative Arts Emmy. On the drama series side, Foy was honoured for The Crown and her reprisal of Queen Elizabeth II, the role that won the Briton a lead actress Emmy in 2018. Seen in 2018 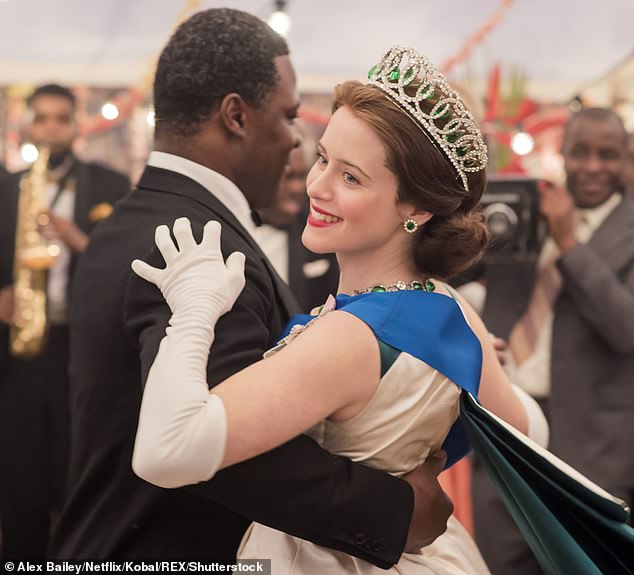 The brunette beauty recently praised Jonathan as the ‘nicest person in the world’.

She gushed: ‘I just think Jonathan is just the nicest person in the world. So, I’m just really lucky. I just try to be as nice back as, you know, he is. And it works.’

Zooey – who has Elise Otter, five, and Charlie Wolf, three, her ex-husband Jacob Pechenik – recently explained she bonded with Jonathan over their shared views for saving the environment.

She said: ‘It’s really inspiring how passionate he is about green energy and solar power. He’s always working to try to figure out solutions for those problems, and really wants to support people who are being innovative on those levels. 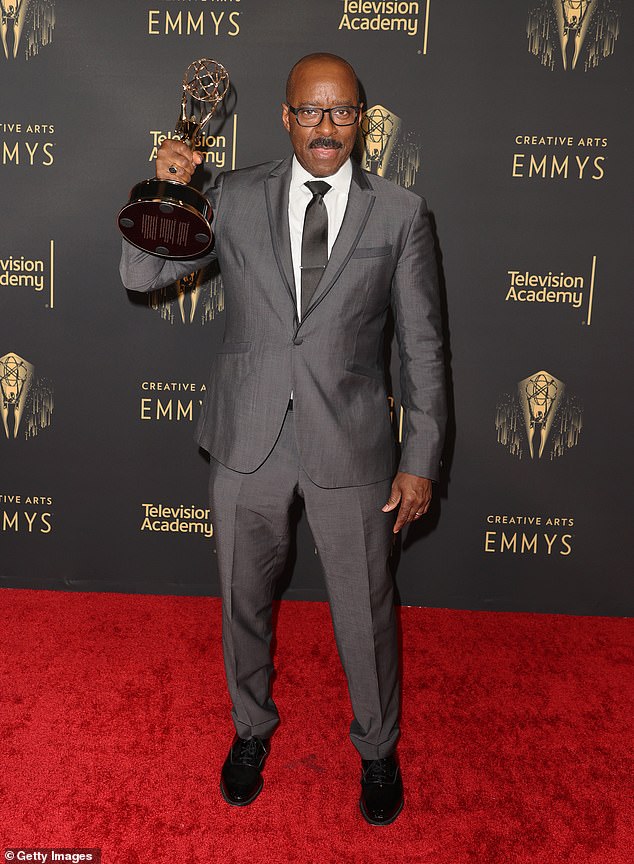 ‘I remember actually when we first met, he sent me his documentary and I was like, wow, we are so aligned on this level. Because we both really care about this one issue, but have different areas that we focus on.’

At the Creative Arts Emmys there were several big winners.

Claire Foy was honoured for The Crown and her reprisal of Queen Elizabeth II, the role that won the Briton a lead actress Emmy in 2018.

The 2021 Creative Arts Emmy Awards were held this weekend at LA Live in Los Angeles across three ceremonies.

There are so many categories each year at the Emmys and it is not impossible to hand them all out during the televised ceremony.

The Television Academy holds an event one week earlier to announce the winners of the Creative Arts awards.

All of the guest acting categories were announced. 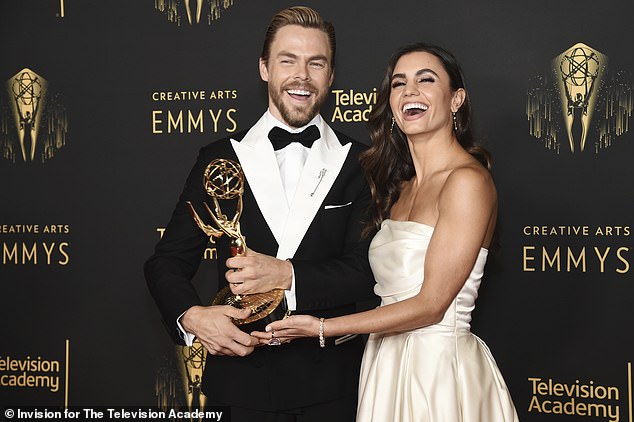 He landed it: Derek Hough, winner of the Emmy for outstanding choreography for variety or reality programming for the Paso Doble-Uccen / Tap Dance – Let’s Fall in Love for the Night routines in Dancing with the Stars and girlfriend Hayley Erbert 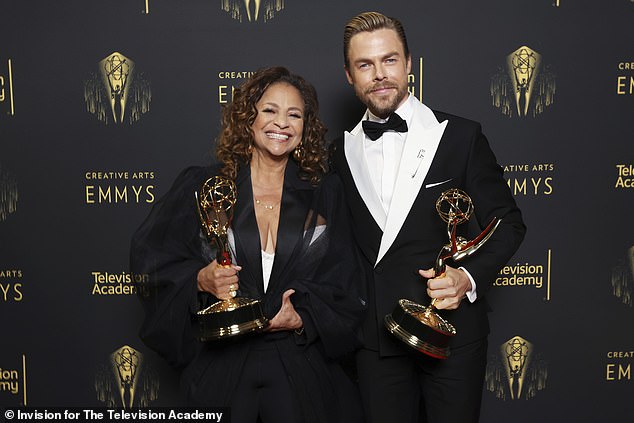 They make a good team: Debbie Allen and Hough pose for a portrait during the third ceremony of the Television Academy’s 2021 Creative Arts Emmy Awards at the L.A. LIVE Event Deck on Sunday 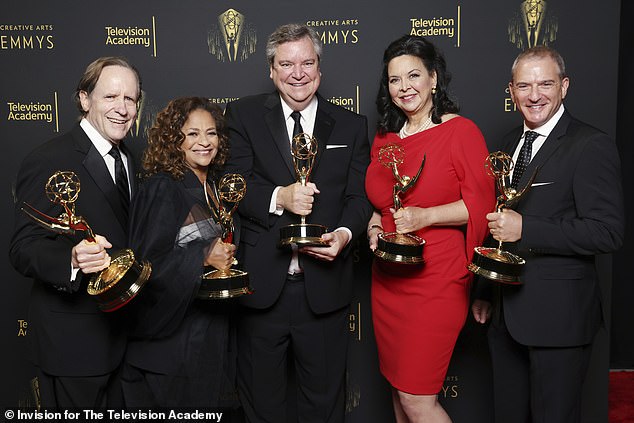 As were the categories for hair, makeup, costumes, cinematography, production design, and others.

Vance won for his role in Lovecraft Country.

For Rudolph, it was a repeat of her victory in the category last year, for the same show.

Rudolph said she felt ‘honoured’ to be ‘part of a legacy’ with her Emmy Awards wins.

The 49-year-old actress won the Comedy Guest Actress and accolade at Sunday’s third installment of the Creative Arts Emmys for her hosting of Saturday Night Live, shortly after taking the Outstanding Character Voice-Over Performance for Big Mouth at the second segment, which made her the first person in 20 years to win twice consecutively in the same category, twice. 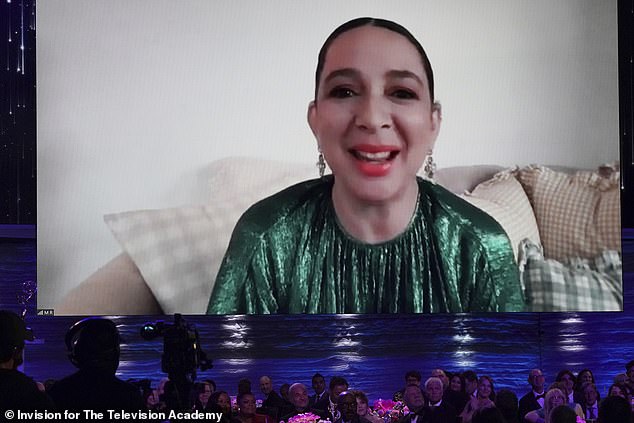 Happy days: Rudolph said she felt ‘honoured’ to be ‘part of a legacy’ with her Emmy Awards wins. The 49-year-old actress won the Comedy Guest Actress and accolade at Sunday’s third installment of the Creative Arts Emmys for her hosting of Saturday Night Live, shortly after taking the Outstanding Character Voice-Over Performance for ‘Big Mouth’ at the second segment

And that’s not all because Maya also became the third Black woman ever to win back-to-back Emmys, an achievement she was particularly proud of.

She told reporters backstage at the Los Angeles event: ‘Wow that’s amazing. I feel honoured to be part of something like that. I feel like this Emmy is very fitting in that it’s for something that feels like such a personal achievement.

‘It’s for hosting my childhood love and dream and at a place in my life I finally realized it’s what I do best, and what makes me happiest when I perform. 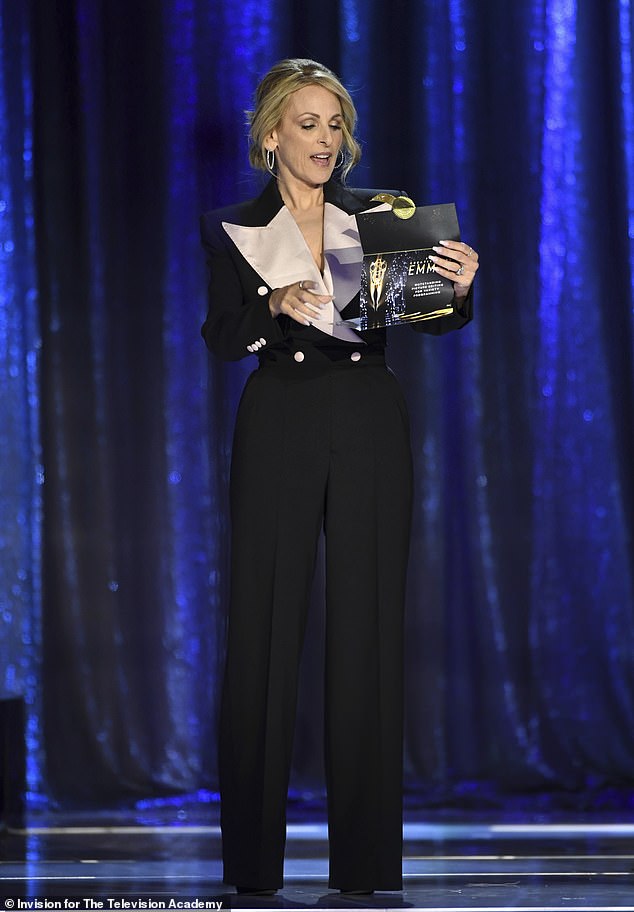 She made it: Marlee Matlin appears on stage during night one of the Television Academy’s 2021 Creative Arts Emmy Awards on Saturday 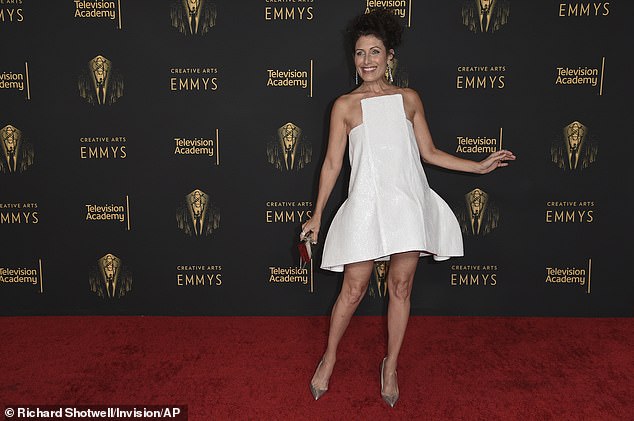 She showed off her legs: Lisa Edelstein poses in the press room on night one of the Creative Arts Emmy Awards

‘I feel really honoured that I’m part of a legacy as the third woman of colour to achieve that.’

Maya has met with Vice President Kamala Harris, and admitted the politician was ‘lovely and cool’ about her depiction of her on ‘Saturday Night Live’.

She said: ‘We did meet during a fundraiser before the election over Zoom.

‘She was quite aware that I was playing her and was so lovely and cool, and it was so exciting to talk to her and to meet her, and to get a chance to be a part of her orbit. 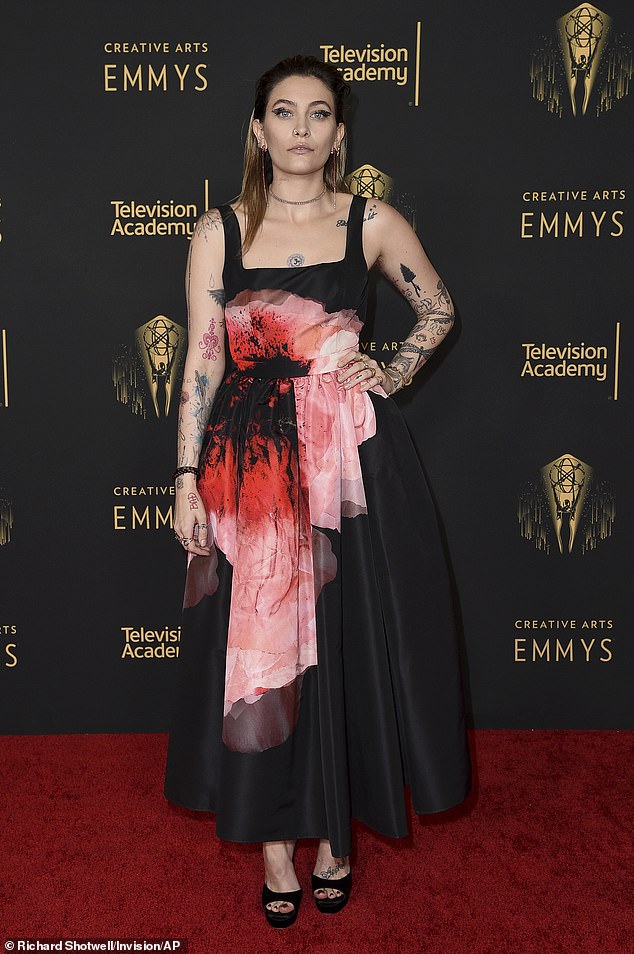 She made the Saturday event: Paris Jackson poses in the press room in a stunning black dress

‘But she’s so cool, she was great about it, and I think that’s always the mark of someone who knows that they’re impenetrable and they’re doing something great in the world because she knows I’m doing it with love and she’s so fantastic that someone is impersonating her.’

Regina King was the most recent Black actor to win back-to-back Emmys for her work in ‘American Crime’ in 2015 and 2016, while Uzo Aduba previously enjoyed consecutive wins for ‘Orange is the New Black’.

In the short-form comedy or drama series, the winners were JB Smoove for Mapleworth Murders and Keke Palmer for Keke Palmer’s Turnt Up with the Taylors. 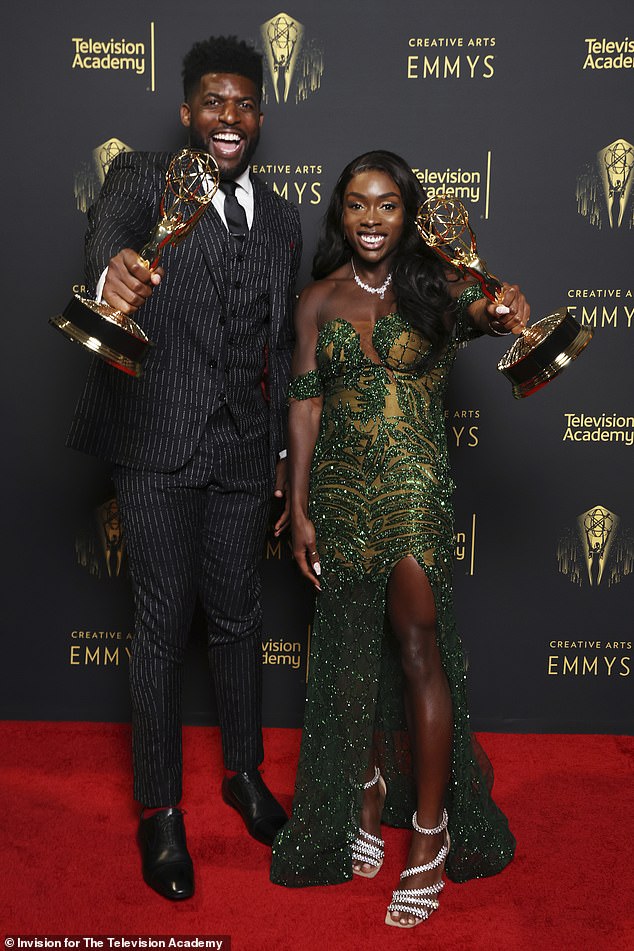 They got the gold: Emmanuel Acho and Morolake Akinosun, winners of the Emmy for outstanding short form nonfiction or reality series for Uncomfortable Conversations with a Black Man 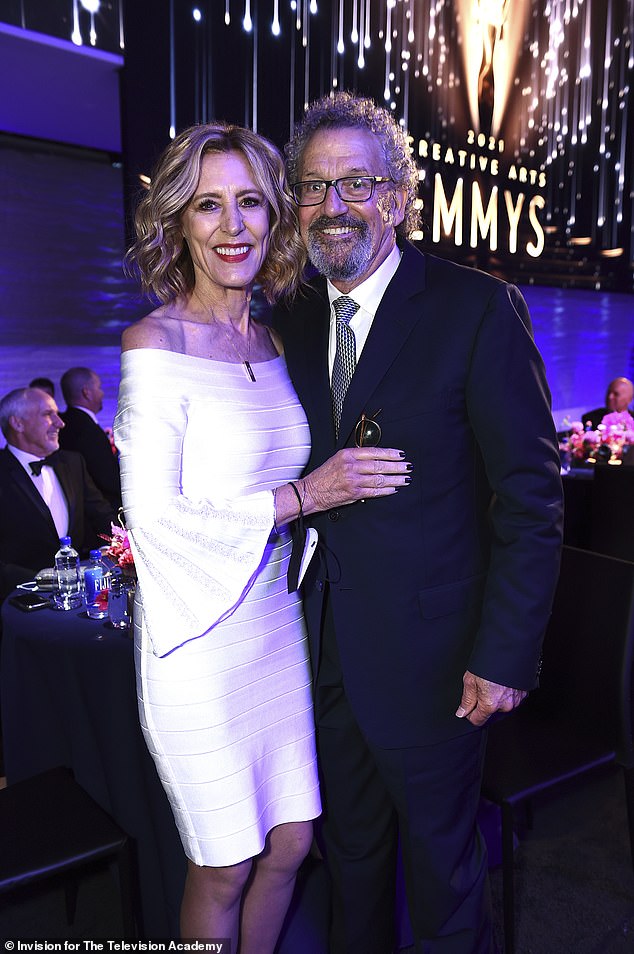 They made the event: Christine Lahti, left, and Thomas Schlamme attend the third ceremony of the Television Academy’s 2021 Creative Arts Emmy Awards at the L.A. LIVE Event Deck on Sunday

The creative arts awards were presented in non-televised weekend ceremonies that will be part of a special set for Saturday on FXX.

The awards are precursors to the main Emmys ceremony airing on Sunday, September 19, on CBS.

Also at the Creative Arts Emmys was Selling Sunset star Chrishell Stause who looked stunning in a pink dress and Paris Jackson who went with a black gown. 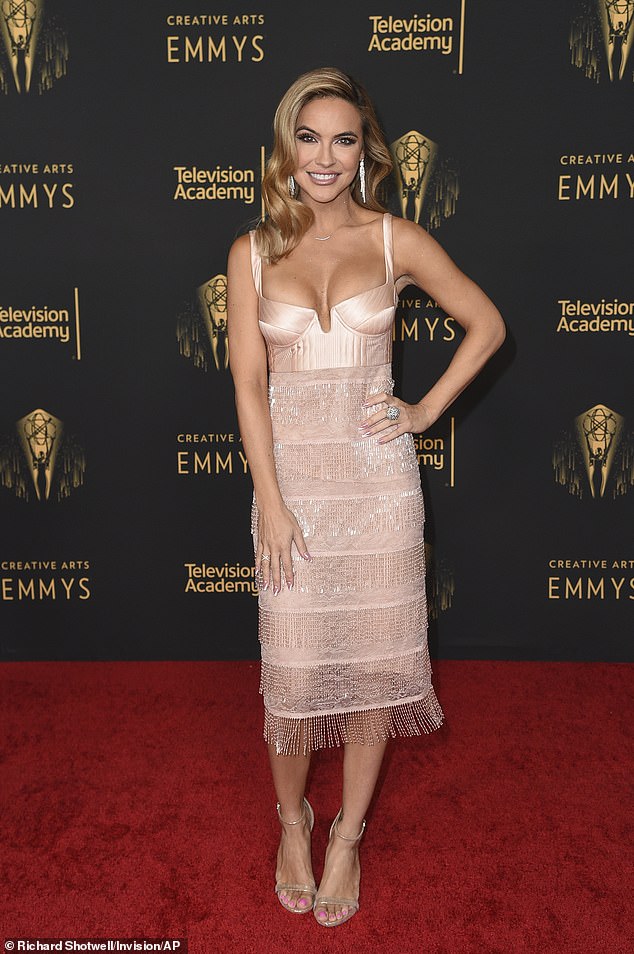