By relocating to New York City and making her Broadway debut in a new comedy play, Julianne Hough is living out a nearly lifelong dream.

And on Wednesday the Dancing With The Stars pro slipped back into promo mode for – POTUS: Or, Behind Every Great Dumba** Are Seven Women Trying to Keep Him Alive – with a guest spot on Live With Kelly And Ryan in New York City.

Matching her bright and infectious smile, the actress, singer and dancer was seen outside the ABC studios decked out in a bright red ensemble that was sure to turn heads, even in the bustling streets of Manhattan. 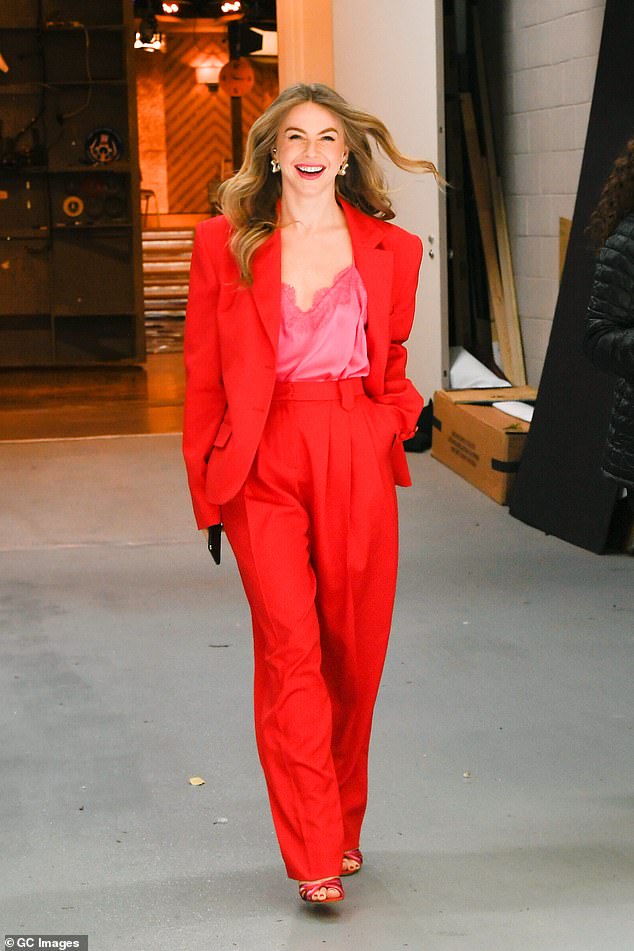 Bright and bold: Julianne Hough, 33, flashed her bright infectious smile outside the ABC studios in Manhattan on Wednesday, decked out in a bright red suit

Hough, 33, could be seen strutting her stuff in the pants and blazer combo from the Magda Butrym clothing line.

The pants had a loose look and a pleated design, while the matching jacket was left open to help showcase her top, which was sort of a purple or lavender shade with a plunging neckline.

Feeling a bit flirty, she left the blazer unbuttoned, which no doubt was able to get more eyes glued on her as she made her way in and out of the studio.

Stylin’: The Dancing With The Stars pro wore a suit  from Magda Butrym, which she left open to showcase her plunging purple top 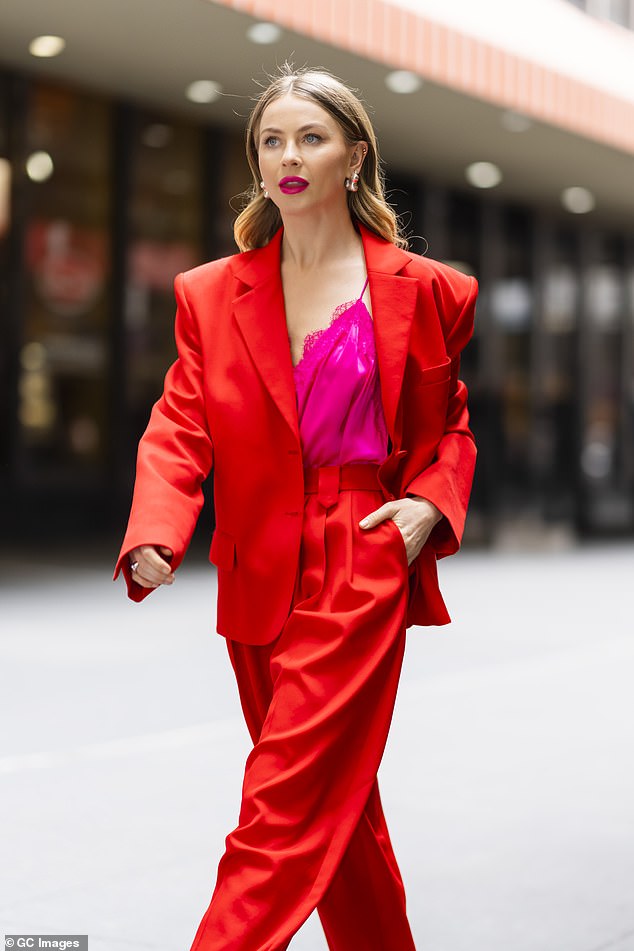 Promo mode: Hough also wore matching red lipstick as she continued her promotional push for her first Broadway play with a guest spot on Live With Kelly And Ryan on Wednesday

Having slipped out of her dancing shoes, the Dancing With The Star pro  replaced them with a pair of perfectly matched red open-toe heels.

On this day, the television personality had her blonde tresses styled long and flowing well past her shoulders, with some soft waves and a part in the middle.

In keeping with the fashion theme, she also donned lipstick that matched her red ensemble. 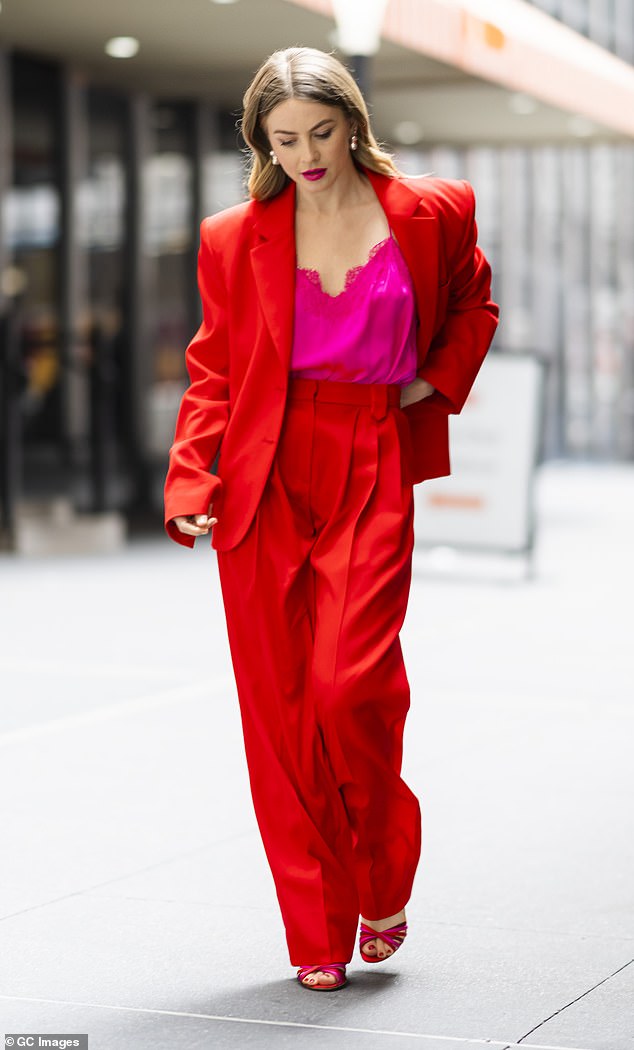 Dreams do come true: By moving to New York City and starring in her first Broadway play – POTUS: Or, Behind Every Great Dumba** Are Seven Women Trying to Keep Him Alive – Hough says she is living out a nearly lifelong dream 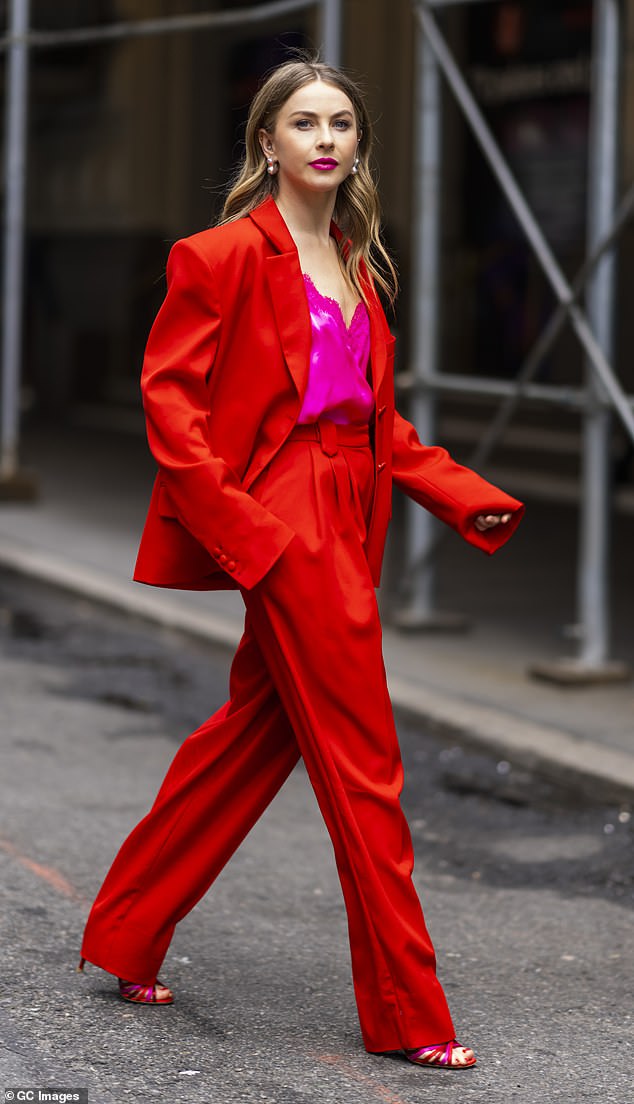 On the go: The actress, singer and dancer eventually made her way back to the studio

Earlier on Wednesday, Hough took to Instagram and informed her five million followers that she was about to leave her New York City apartment and head ‘over to Live With Kelly And Ryan.’

I’ll see you guys there. I may be talking all things POTUS in New York. And I get to see Maria [Menounos], who’s filling in for Kelly.’

‘Kelly I hope you get better soon; sending all my love,’ Hough added and then blew a kiss into towards the camera.

Ripa was expected to miss some shows after revealing that she had tested positive for COVID-19 last weekend, according to CNN. 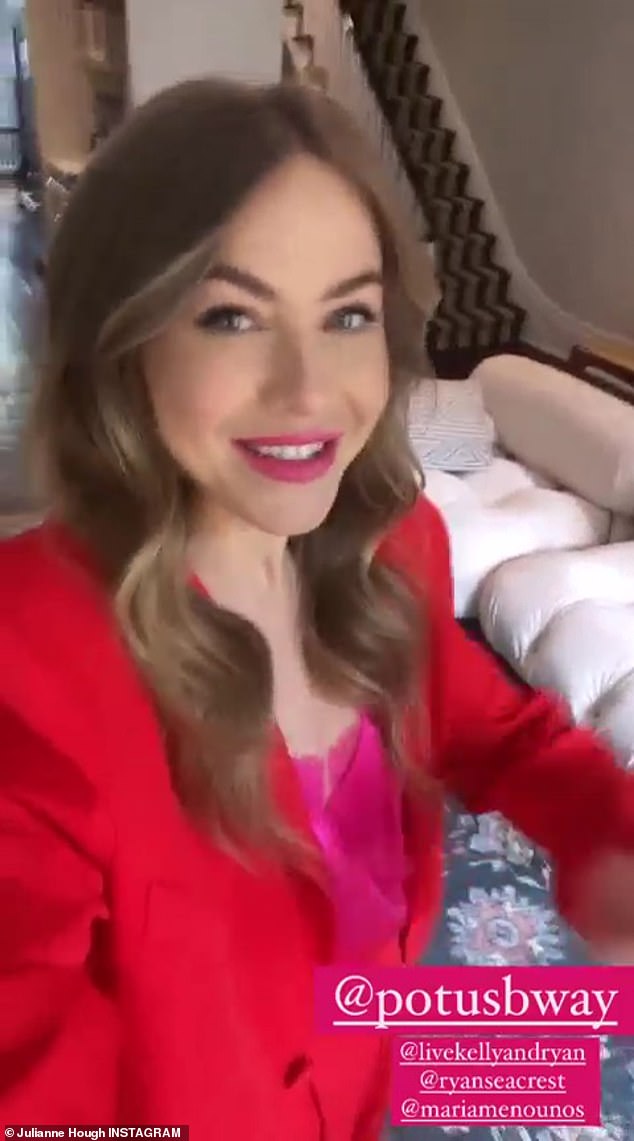 Guest spot: Earlier on Wednesday, Hough informed her 5 million Instagram followers that she was about to leave her New York City apartment and head ‘over to Live With Kelly And Ryan’ 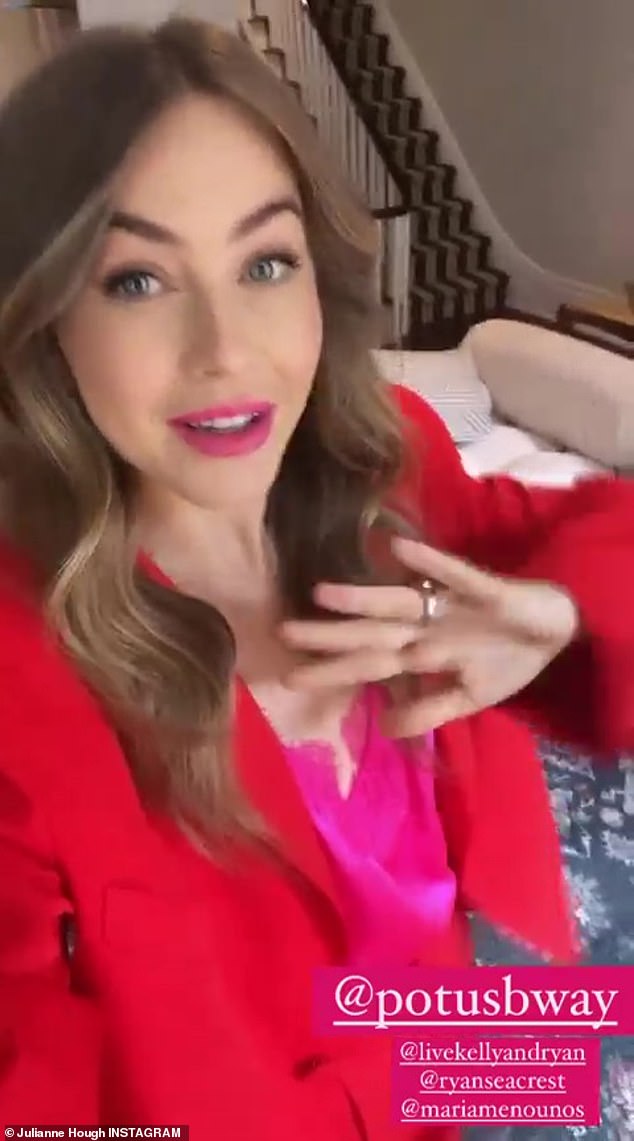 Talk show promo: ‘I may be talking all things POTUS in New York. And I get to see Maria [Menounos], who’s filling in for Kelly,’ the television personality said in an Instagram post

Hough also struck a few poses in her colorful outfit, and shared some words of wisdom that was seemingly geared to those who aren’t currently in a romantic relationship

‘When you miss Valentine’s Day… Celebrate the love every day!’ she wrote in the caption.

Hough has been giddy with excitement about her role as Dusty in POTUS: Or, Behind Every Great Dumba** Are Seven Women Trying to Keep Him Alive, which is a play by Selina Fillinger that opened on Broadway on April 27 at the Shubert Theatre.

Between pausing her career amid the COVID-19 pandemic and her split from retired hockey player Brooks Laich in 2020, Hough has seen her life drastically change over the past couple of years.

Feeling like it was opportunity to try something new, Hough didn’t hesitate at the chance of scoring a role in POTUS and then moving to Manhattan for a fresh new start. 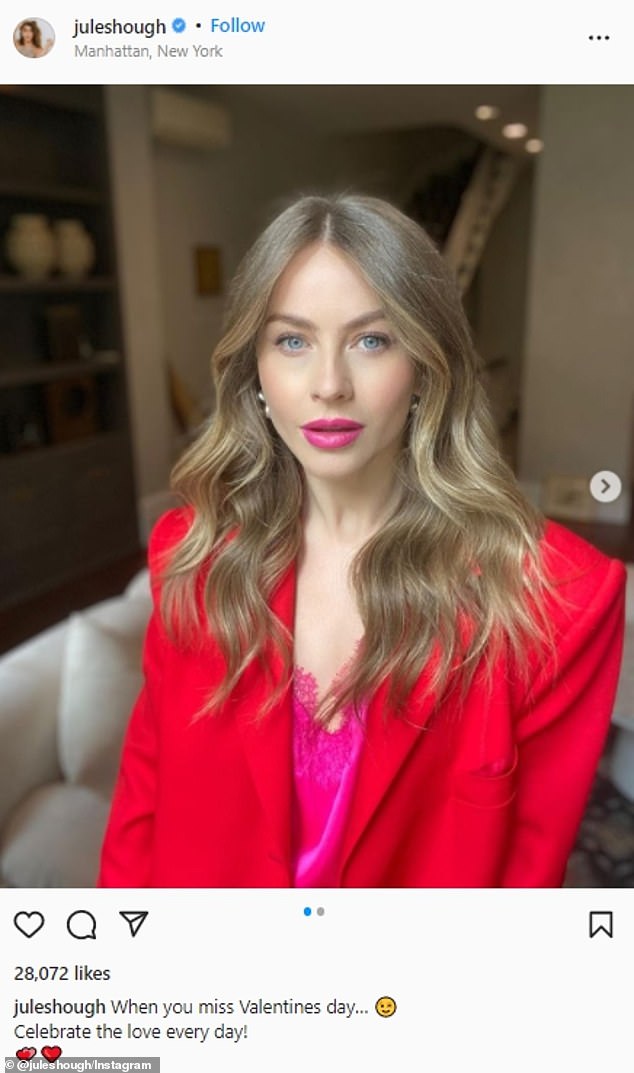 All about the love: Hough shared some words of wisdom seemingly for those who aren’t currently in a romantic relationship on Instagram, while decked out in her colorful outfit 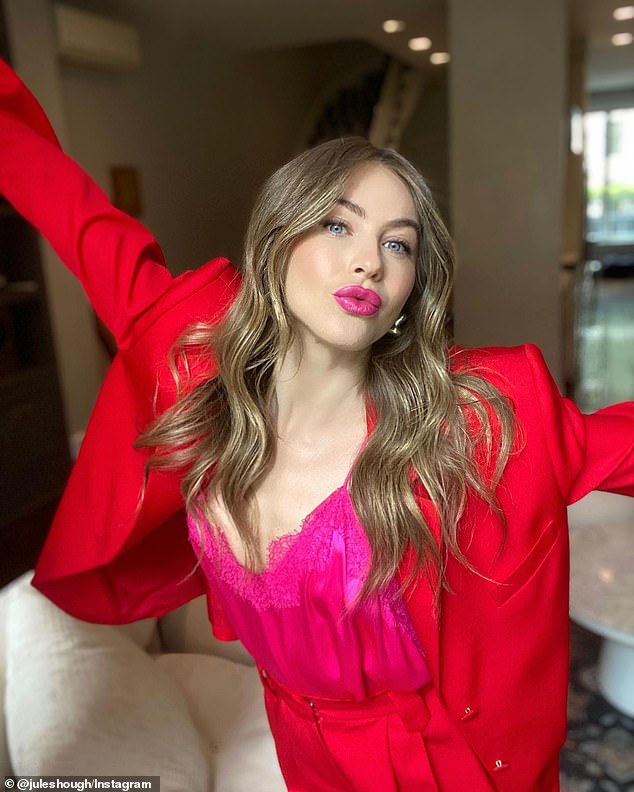 Her dream realized: Hough confessed toPeople that she has always wanted to be apart of a Broadway production like POTUS and living in New York City

‘This has been a dream of mine — not only to be a part of a show like this, but to be a part of the Broadway community,’ Hough confessed to People, before revealing that she has bonded with the all-female cast that includes Lili Cooper, Lea DeLaria, Rachel Dratch, Vanessa Williams, Suzy Nakamura, and Julie White, among others.

‘I truly feel a sisterhood. They’ve really shown me what friendship is.’

POTUS opened at the Shubert Theatre last month and will run through August. The production, which covers an array of timely subjects, like abortion, has already scored three Tony nominations, including Outstanding Production Of A Play.

‘Being in this play with these hysterical women, it’s just broadening and hopefully expanding myself as an artist,’ Hough added. ‘This is just the beginning.’ 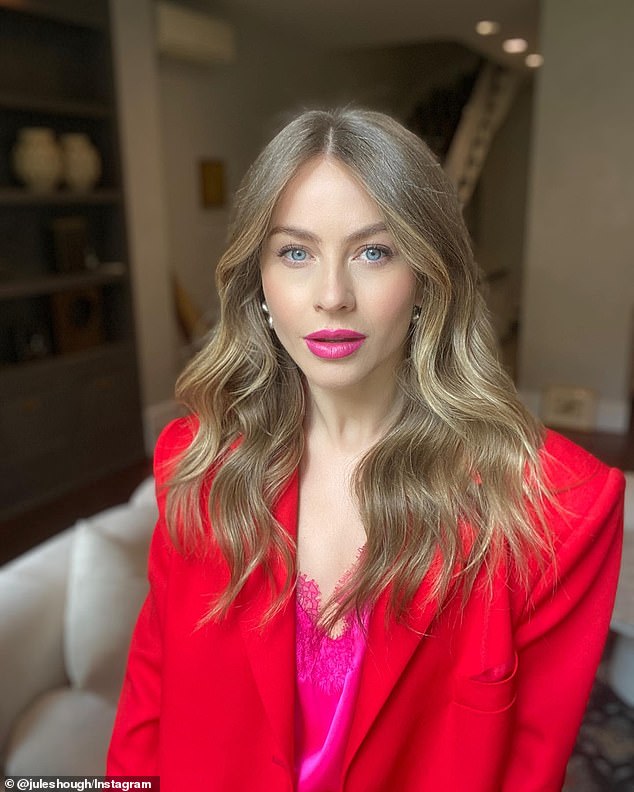