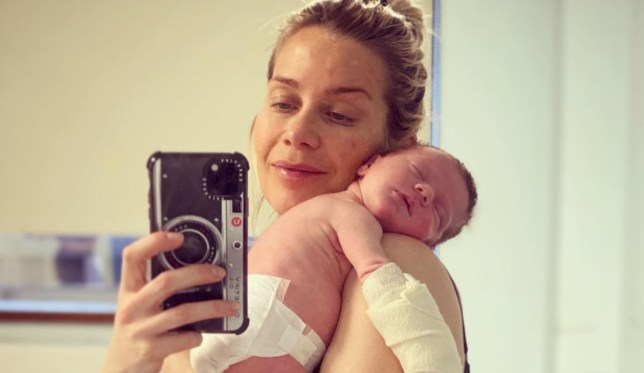 Kate Lawler has shared an update on her baby daughter’s health after taking her to hospital three times since her birth.

Kate and her fiance Martin welcomed their first child Noa last month, and have been in and out of hospital since as she suffered breathing problems having been born 11 days early and then a finger infection.

The Big Brother star, 40, said in a new Instagram post that she hoped it would be their last hospital visit after Noa’s blood tests came back clear.

The new mum said she counts herself ‘lucky’ that her daughter hadn’t been more ill.

Sharing a string of pictures from hospital with Noa, Kate praised the NHS for their care and said: ‘Today is hopefully our last day of hospital visits for Noa’s IV antibiotics. 🥰

‘We were told initially that she’d only need to come in on Thursday we were discharged on Wednesday evening. Friday morning however, we got a call saying she was to remain on them until today. We were here five hours yesterday as she had to have further blood tests after being observed but thankfully all came back clear.

Kate hopes they have had their last hospital visit (Picture: Instagram)

‘I’ve never been so grateful for our National Health Service as I am right now. The doctors, nurses, consultants, every member of staff at The Whittington Hospital has been incredible, attentive and kind and I can’t thank them enough.’

She went on: ‘Despite these first few weeks being incredibly challenging, I count myself so lucky that Noa hasn’t been seriously poorly. She fought back at the beginning, her Paronychia healed well and whatever it is she has now she appears to be getting better.

Noa has been in and out of hospital (Picture: Instagram)

‘Sorry I’ve been a bit quiet but I’ve tried to focus on getting Noa better and the only downtime I seem to have had is a couple of hours in the early evening where I’ve wanted to do nothing but eat carbs and watch @nbcsuperstore. Obsessed with this TV show, it’s what you can hear in the background if you swipe left.

‘Thank you for your concern, Boj told me he’s received messages asking if all is okay. Hopefully be back to my old self soon. The main thing is, Noa is going to be okay. Alright, currently waiting for the last IV to begin and once that’s done it’s home time for good!’

The TV star, who became the first woman to win Big Brother in 2002, has been open about her tough experiences since welcoming Noa in February, admitting that her first week at home with her baby was the ‘most overwhelming experience of my life’.

MORE : Who is in the final of The Great Pottery Throwdown after their biggest make yet?

MORE : BTS confirmed to set the night alight with Grammys 2021 performance as they join Taylor Swift and Dua Lipa in line up