Kelly Bensimon has been trying to rock the vote!

And on Thursday, the Real Housewives Of New York City alum was back at it again, urging her 236,000 fans and followers to vote in the upcoming local and national elections in the U.S. that culminates on November 3.

Only this time she practiced what she has been preaching by wearing a stylish brown shirt with the word ‘voter’ written across the front of it as she strolled along the streets in the Soho neighborhood of Downtown Manhattan. 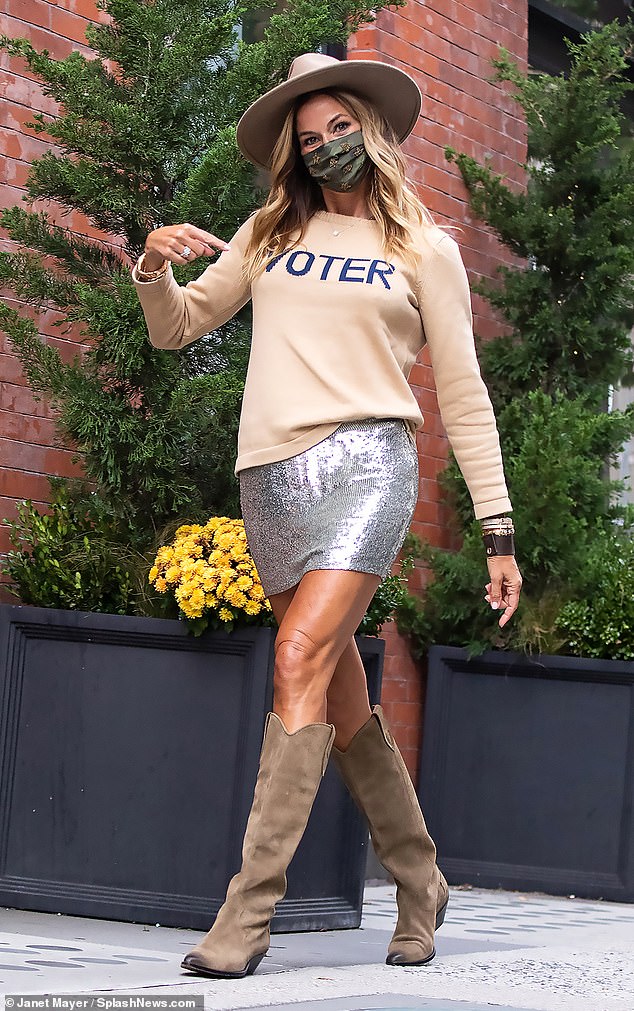 Civic duty: Kelly Bensimon, 52, strutted through the streets of Downtown Manhattan on Thursday wearing a brown ‘voter’ shirt and a silver sequin skirt

Wanting to also make a statement with her fashion, Bensimon paired her ‘voter’ shirt with a silver sequin skirt that helped showcase her fit figure.

She happily strutted her stuff in brown cowboy boots, that nearly came up to her knees, and a matching cowboy hat over her long blonde tresses.

At times, the real estate agent wore a cream-colored zipper jacket over her shoulders, just in case the temperature took a major tumble.

She did make sure to don a protective mask, which matched her ensemble, in adherence to health and safety protocols amid the still raging COVID-19 pandemic. 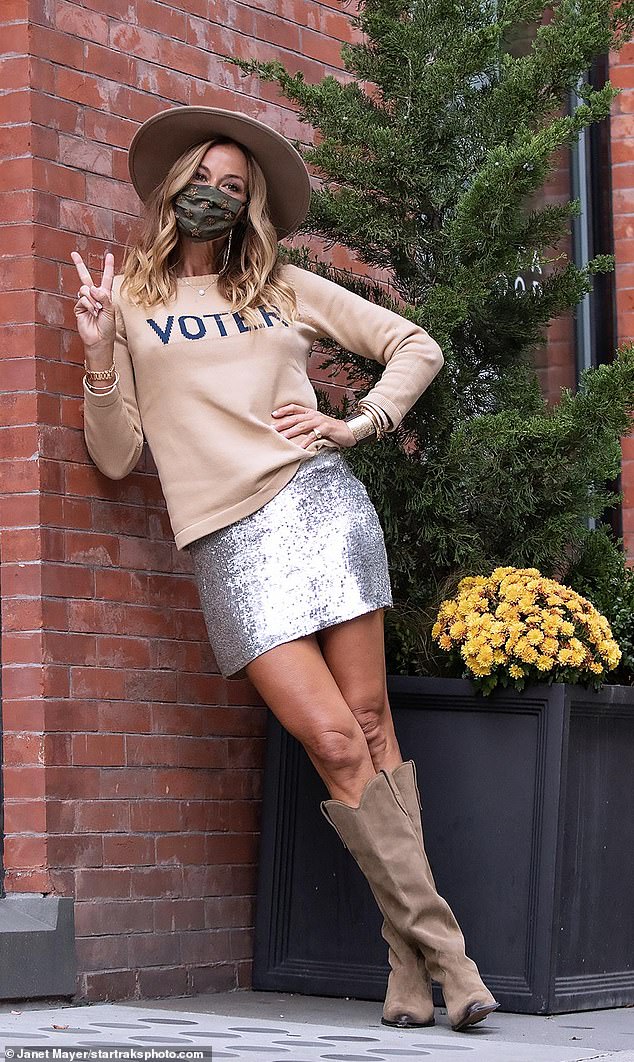 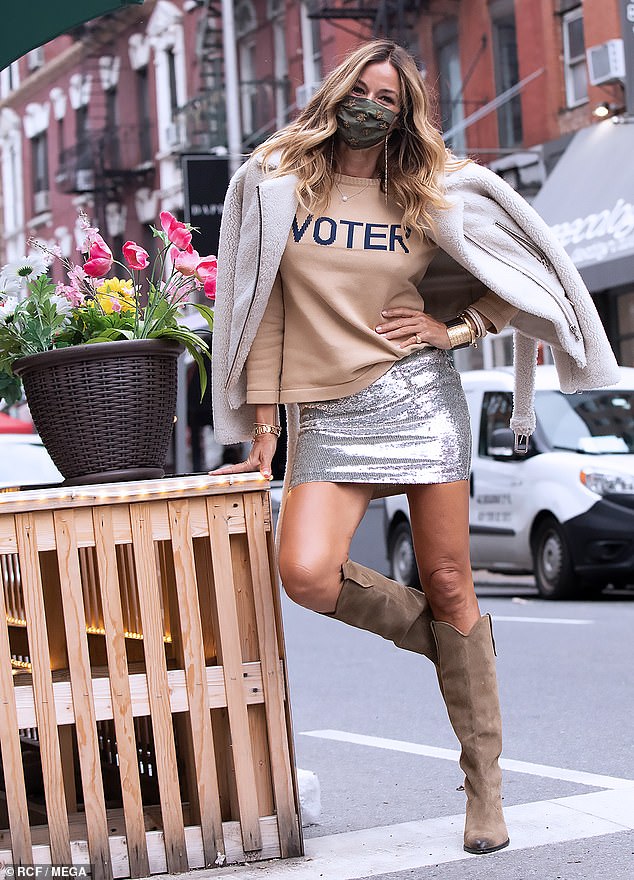 Just in case: At times the real estate agent wore a cream-colored jacket over her shoulders

At certain points, Bensimon stopped to pose for the photographer, which included flashing a peace sign as she leaned up against a brick wall.

She also used her index-finger to direct attention to her ‘voter’ message that happened to be written across her ample assets.

The previous day Bensimon took to Instagram and shared a short video of herself walking her dog while carrying a ‘voter’ bag over her right shoulder.

‘VOTE NOW! I feel so lucky to have the opportunity to use my voice and to vote for whom I want to,’ she began in the caption.

‘I’m grateful to my powerful Suffragettes who gave us women ‘Votes for Women’. Thank you to @paravel for supporting all of us who are proactive in making our America the best it can be. See story for #ootd #vote #newyork’ ⁣ 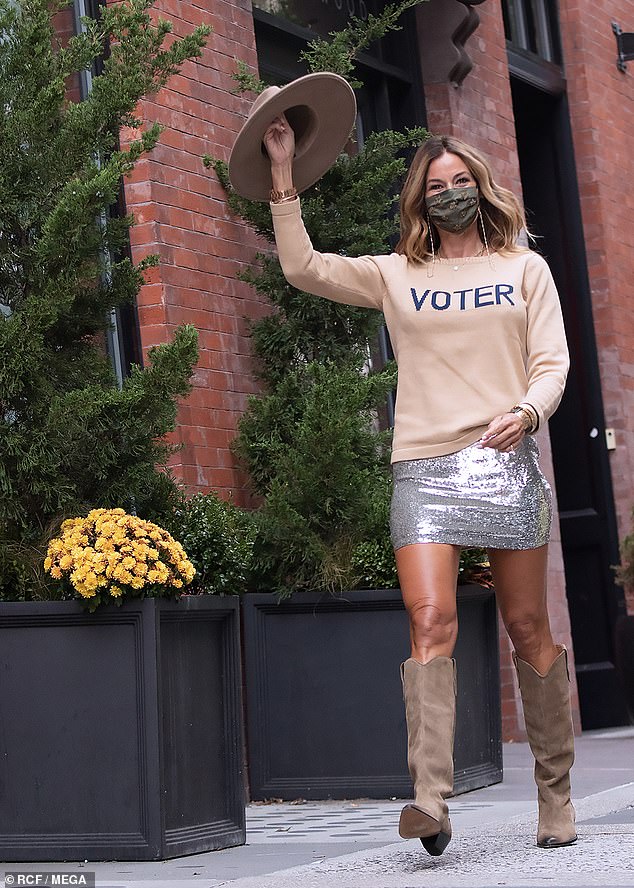 Just last week Bensimon made another push to get people to have their voices heard in the elections by sharing a photo of herself wearing her brown ‘voter’ shirt.

At 5ft 10in, Bensimon first gained recognition as a model in New York City, appearing in such coveted fashion magazines as Elle, Cosmopolitan and Harper’s Bazaar.

She has also been the founding editor of Elle Accessories, authored several books including In The Spirit of the Hamptons, American Style, and The Bikini Book, and wrote a column for Page Six Magazine called The Socializer: Kelly Bensimon.

Bensimon has two daughters, Sea Louise, 22, and Thaddeus Ann, 20, that she shares with ex-husband and fashion photographer Giles Bensimon. 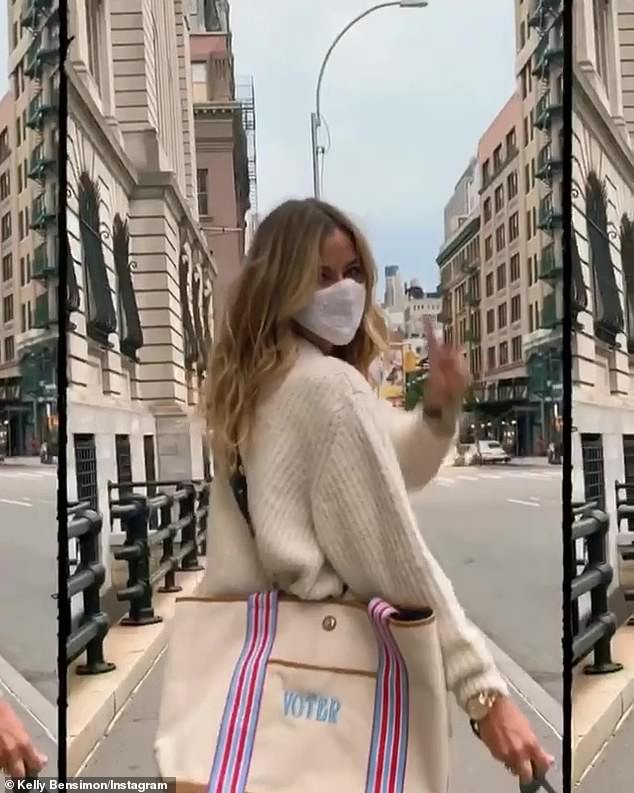 Another push to vote: On Wednesday, Bensimon shares a quick video of herself carrying a ‘voter’ bag while she walked her dog in NYC 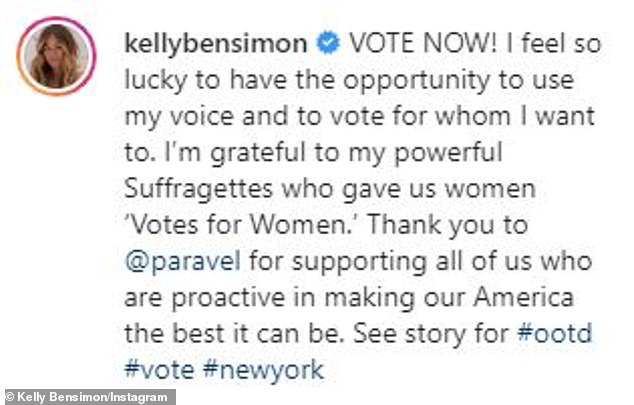 Respect: The mother of two showed gratitude for the female trailblazers who led the way to women getting the right to vote 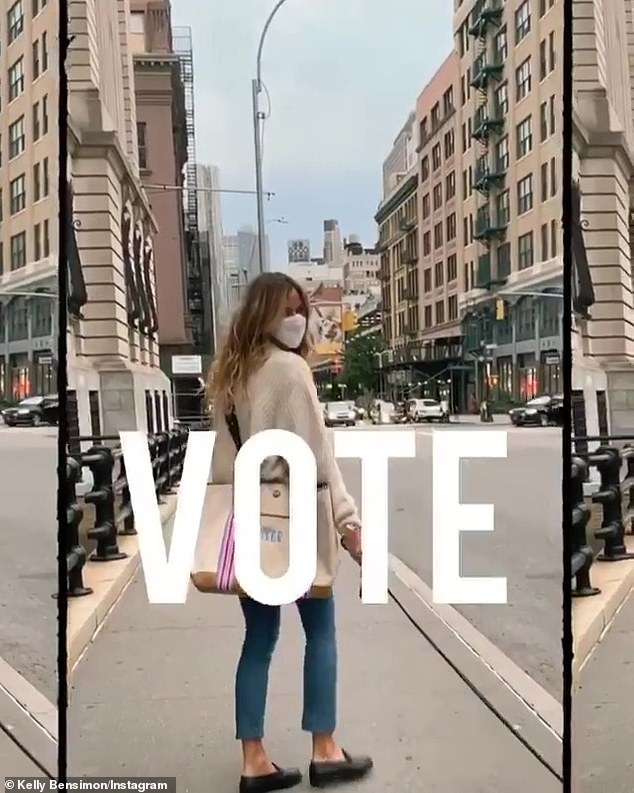 Using her voice: Bensimon has been urging her 236, 000 fans and followers to vote 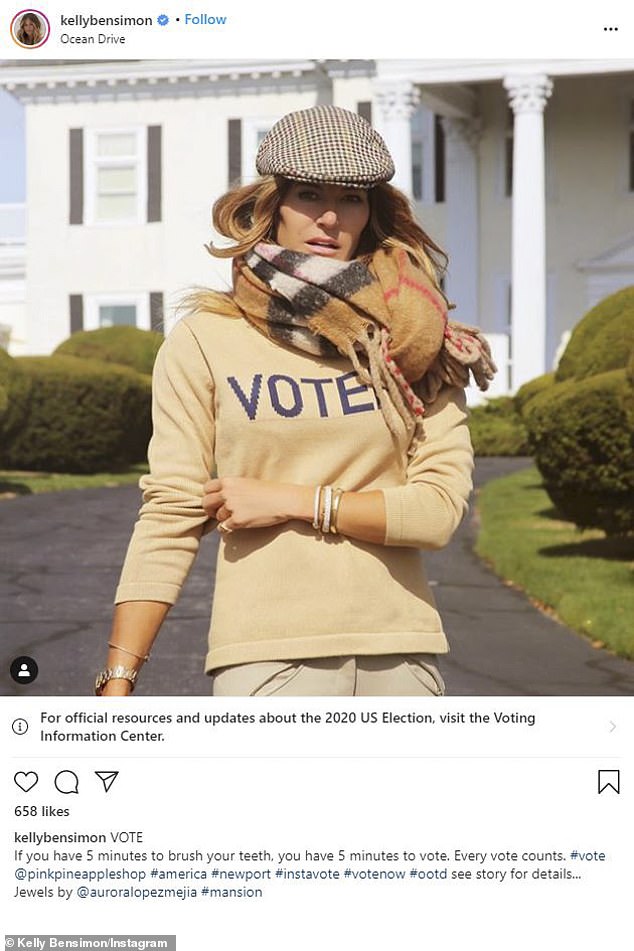 Just do it; The Illinois native also donned a ‘voter’ shirt in a post last week