Former Leeds captain Kevin Sinfield made a triumphant if painful return to Headingley after completing his latest fund-raising challenge.

Around 1,000 supporters were at his old ground to witness the completion of his 101-run mile from Leicester, where he now works as defence coach with the Tigers, inside 24 hours.

Sinfield has raised over £500,000 for the MND Association and the Leeds Hospitals Charity to build a new care home in the name of his former Leeds team-mate Rob Burrow, who was diagnosed with motor neurone disease in December 2019.

Burrow was at Headingley for the emotional return of Sinfield, who was clearly in much discomfort after his gruelling run, the equivalent of almost four marathons completed without sleep.

‘It’s been a real team effort from all the crew and I wouldn’t have got it done without them,’ Sinfield told BBC Breakfast after finishing. 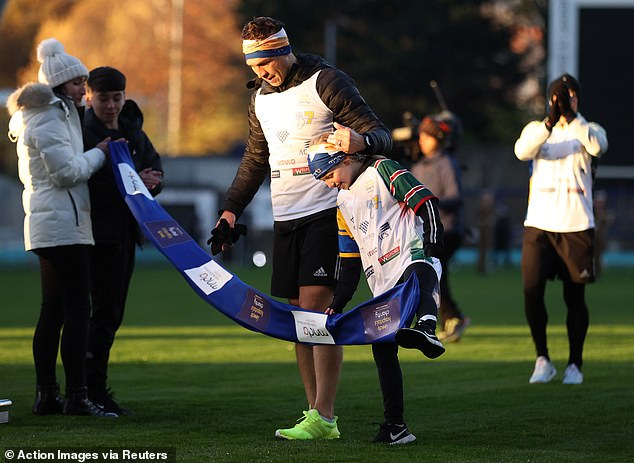 Kevin Sinfield completed his 101-mile run 24-hour challenge and arrived at the finish line alongside Macy, the daughter of Rob Burrow, at Headingley, Leeds, on Tuesday morning 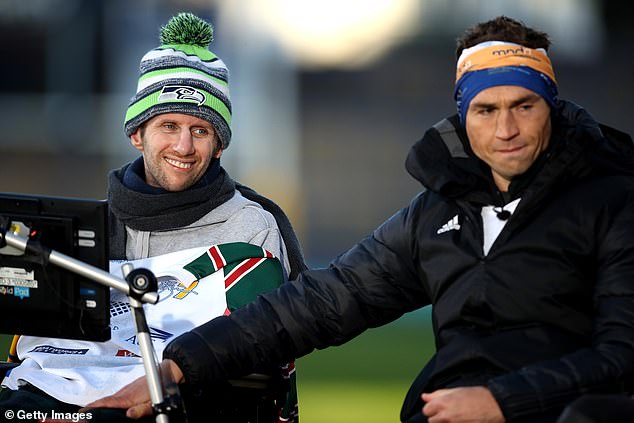 Sinfield raised over £500,000 for the MND Association and the Leeds Hospitals Charity after former Leeds team-mate Rob Burrow (L) was diagnosed with motor neurone disease in 2019 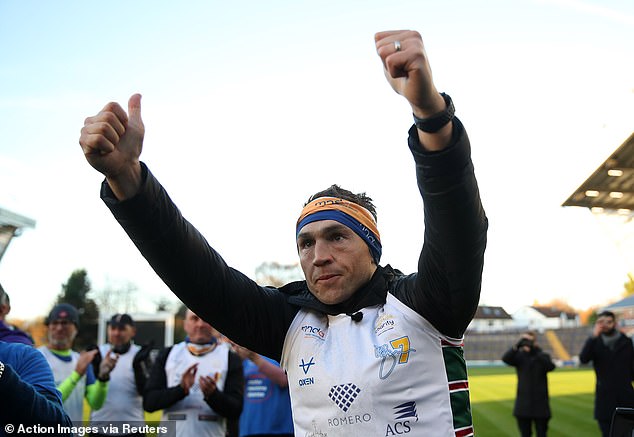 What a moment, what a man! Kevin Sinfield finishes his MAMMOTH 101 mile run in 24 hours live on #BBCBreakfast 🏃‍♂️

And his best mate Rob Burrow saw him over the line pic.twitter.com/IWDgm4wowb

‘The support along the route has been incredible right from the start. It was certainly a battle – we wanted a battle and we certainly got one. I’m broken – I don’t know when I’ll be able to run again.

‘Rob knows how much we love and care about him.’

Sinfield’s journey from Leicester to Leeds was split into seven kilometre segments. 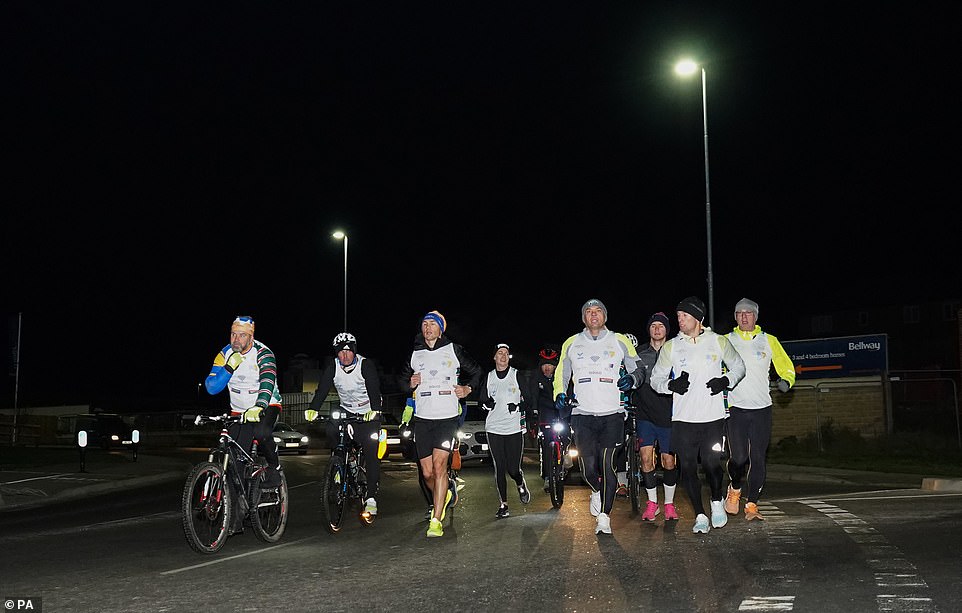 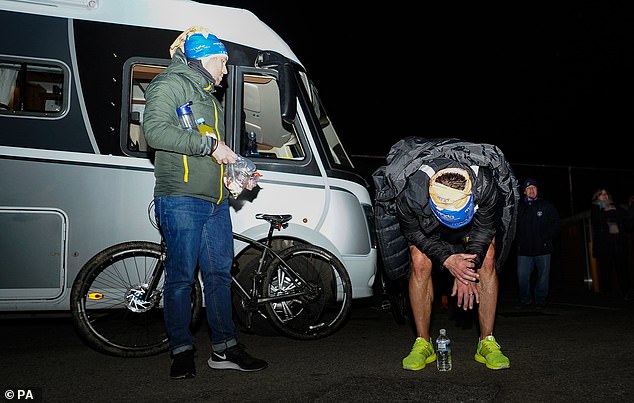 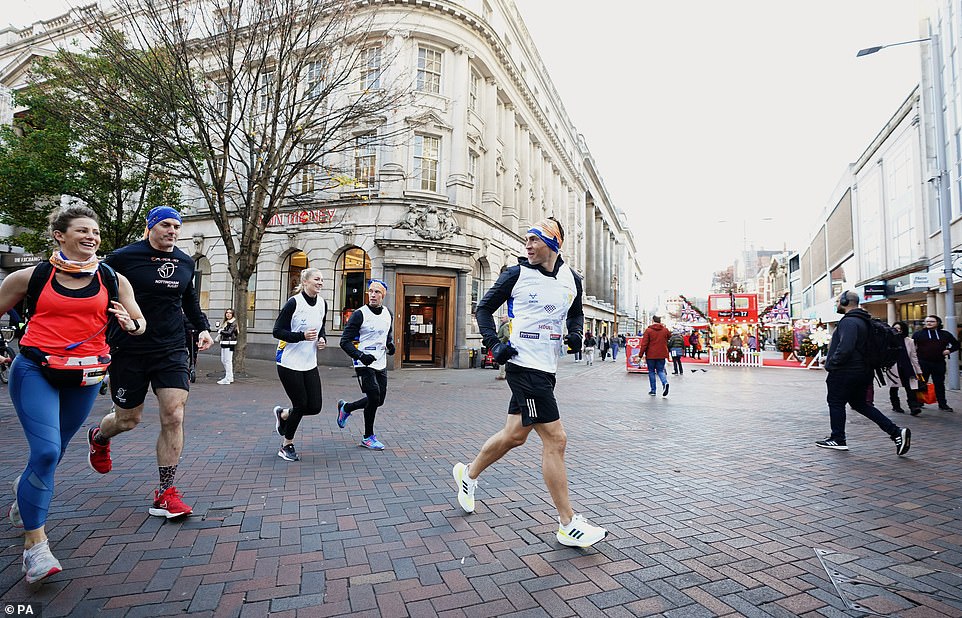 Burrow, married to teenage sweetheart Lindsey and is dad to Macy, nine, Maya, six, and Jackson, two, was diagnosed with motor neurone disease in 2019 and given just two years to live.

The Rugby League legend, who is now wheelchair-bound, was at the finish line on Tuesday with his daughter Macy joining Sinfield for the final few steps of his challenge on the Headingley pitch.

What is Motor Neurone Disease?

Motor neurone disease is a rare condition that mainly affects people in their 60s and 70s, but it can affect adults of all ages.

It’s caused by a problem with cells in the brain and nerves called motor neurones. These cells gradually stop working over time. It’s not known why this happens.

Having a close relative with motor neurone disease, or a related condition called frontotemporal dementia, can sometimes mean you’re more likely to get it. But it doesn’t run in families in most cases.

If you have these symptoms, you should see a GP. They will consider other possible conditions and can refer you to a specialist called a neurologist if necessary.