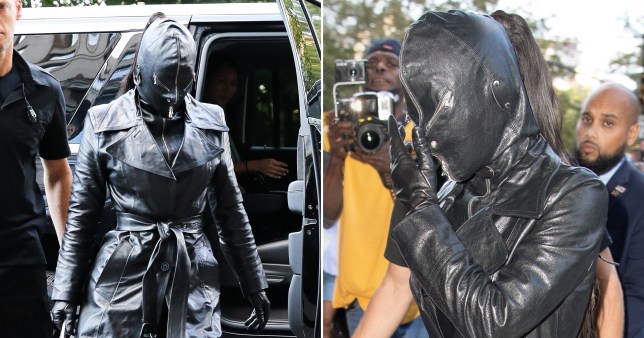 Kim Kardashian is in New York ahead of the Met Gala (Picture: Getty/Backgrid)

Kim Kardashian wore head to toe leather as she checked into her New York hotel ahead of the Met Gala.

Despite wanting to keep low key, she certainly stood out in a leather mask that covered her entire head, with room for her long ponytail at the back, and appeared to fasten around the neck.

The front of the striking accessory had gold zips across the eyes and one down the centre of mask, which she appeared to be pretty comfortable in.

She added a leather coat, gloves and trousers to her look as she hurried into the Ritz Carlton on Saturday, not bumping into a single thing.

The Keeping Up With The Kardashians star is in New York with her family, including Kylie Jenner and Kourtney Kardashian, where the famous sisters have been taking in Fashion Week.

Kim and Kourtney were spotted going for dinner the night before with the latter’s boyfriend Travis Barker and model and actress LaLa Anthony.

The foursome hit up Italian eatery Carbone in the city.

She had her eye zips open (Picture: Backgrid)

She was seen arriving at her hotel in New York (Picture: Splash)

The mum-of-four didn’t bump into a single thing on the way (Picture: GC Images)

Her ponytail was visible from the back of the mask (Picture: GC Images)

Like a caterpillar emerging from its cocoon as a colourful butterfly, we’ll no doubt see Kim again later fully transformed for the Met Gala.

The gala – cancelled in 2020 due to the ongoing pandemic – is usually held on the first Monday in May but has been pushed back to be safe.

This year’s event is being co-hosted by Timothee Chalamet, Billie Eilish, Amanda Gorman and Naomi Osaka.

The theme this year is In America: A Lexicon of Fashion (us neither) which promises to be a deep dive into American ingenuity.

The typically star-studded event is set to take place on September 13.

MORE : Steps’ Claire Richards reveals ‘darker side’ of music as she was told to ‘rearrange’ lump appointment