Louise Minchin struggled to get into the building to start her final day on BBC Breakfast as her pass stopped working.

The newsreader is leaving the programme after nearly 20 years today (September 15) and is going to be given a fitting send off from viewers and colleagues, including co-host Dan Walker.

However after arriving 15 minutes late to work on Wednesday, the TV star revealed she was already being treated like a stranger.

When asked how she was feeling, Louise said: ‘It’s going well so far. My pass doesn’t work already.

Dan added that she had also been shut out of her laptop, with Louise commenting: ‘I’m still in the system but not for long. You think they would let me have my pass until 9.15am!’ 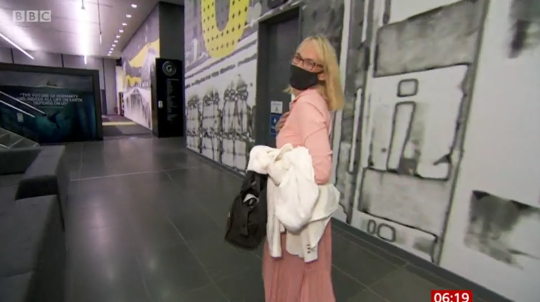 The TV star has been part of the show for just shy of 20 years (Picture: BBC)

A clip of Louise arriving into work was then shown as her fellow BBC employees applauded her when managed to get inside.

The love fest began early as Dan read out messages from viewers thanking her for guiding them through their mornings over the last two decades.

‘There are a lot of people who have great admiration for you Louise, who have sat on this sofa and you’ve made them feel at ease, it’s one your many powers,’ he said.

Louise tried not to get emotional over messages from viewers (Picture: BBC)

Trying not to tear up, Louise said: It’s the people who watch. Thank you for your support, particularly over the last two years.

‘There are so many messages and I’m embarrassed and tearful when I read them.

‘Some people have literally grown up watching me and I feel privileged to have been in that position. There have been tough days and stories but it’s been amazing.’

Dan replied: ‘Over the programme you will understand why you are an important person in the lives of many people.’

Louise revealed that her co-presenter had gifted her a coffee coaster which said ‘We don’t touch’, referencing a comment they famously made during their first photoshoot together.

Louise, 52, began working for the BBC in the 90s, presenting programmes on Radio 5 Live before joining the BBC News Channel as a regular presenter.

She first presented BBC Breakfast in 2001, and in late 2011, it was announced that she would replace Sian Williams as one of BBC Breakfast’s main presenters alongside Bill Turnbull and Charlie Stayt when the programme moved to Salford, with the first edition airing in April 2012.

Breakfast airs weekdays from 6am on BBC One.