Louise Minchin gave an emotional speech at the end of her last ever episode of Breakfast on BBC on Wednesday.

The journalist left the show after 20 years and was given a moving send off by co-star Dan Walker which saw some famous friends and her family send their love and support.

In the closing moments of the programme, which got off to a chaotic start as she found herself shut out of the building – the TV star gave her final thoughts on working with Dan over the last five years and thanked the viewers for always being there.

The 52-year-old told Dan: ‘Because of you I’ve actually stayed longer than I meant to. You always have my back.

‘A huge thank you this wonderful Breakfast team, you all work incredibly hard all of you, every single day of the year. I shall miss you terribly but the programme will carry on.’

Louise continued: ‘To everyone who is watching, thanks for watching all of these years. You are at the heart of everything that we do.

‘It’s been a privilege to sit here and report on our shared history. You’ve made me feel welcome in your homes and hearts. 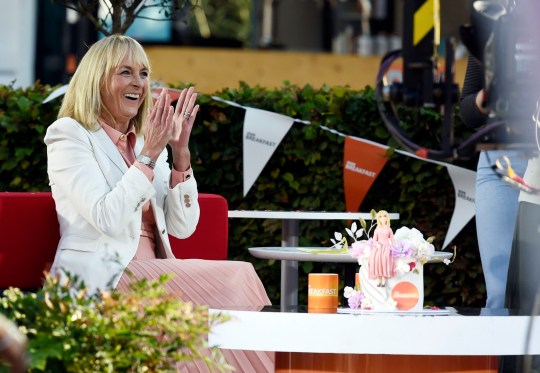 Louise was given an emotional send off and a stunning cake on the programme (Picture: BBC)

‘I am part of the Breakfast family and always will be and I cannot thank you enough for your support, your love, your messages.

‘It has been an absolute pleasure. I will keep watching and I will still be watching. Thank you.’

They were also joined in the studio by Louise’s close friend Robert Rinder, her husband Dave and her dad.

Good morning and thank you for all your love support and messages xxxx last #sofaselfie #BBCBreakfast pic.twitter.com/YebfU2K4QE

Dan led a blindfolded Louise outside to where her surprise was waiting (Picture: Backgrid)

The star has been part of the show for 20 years (Picture: Backgrid)

Louise began working for the BBC in the 90s, presenting programmes on Radio 5 Live before joining the BBC News Channel as a regular presenter.

She first presented BBC Breakfast in 2001, and in late 2011, it was announced that she would replace Sian Williams as one of BBC Breakfast’s main presenters alongside Bill Turnbull and Charlie Stayt when the programme moved to Salford, with the first edition airing in April 2012.

She revealed on her last show that one project she will be taking on is a programme about the menopause.

Breakfast airs weekdays from 6am on BBC One.

MORE : Caitlyn Jenner concedes in California governor race after getting just 1.1% of the vote

MORE : Alanis Morrisette will not support her own HBO documentary as she accuses film of ‘salacious agenda’