She’s kept a low profile after being fined in the Caribbean earlier this year.

But Zara Holland was in high spirits as she enjoyed dinner at Peter Street Kitchen Restaurant in Manchester on Saturday.

The Love Island star, 25, opted for a flirty cream mini dress and gold strapped heels as she stepped out for the evening. 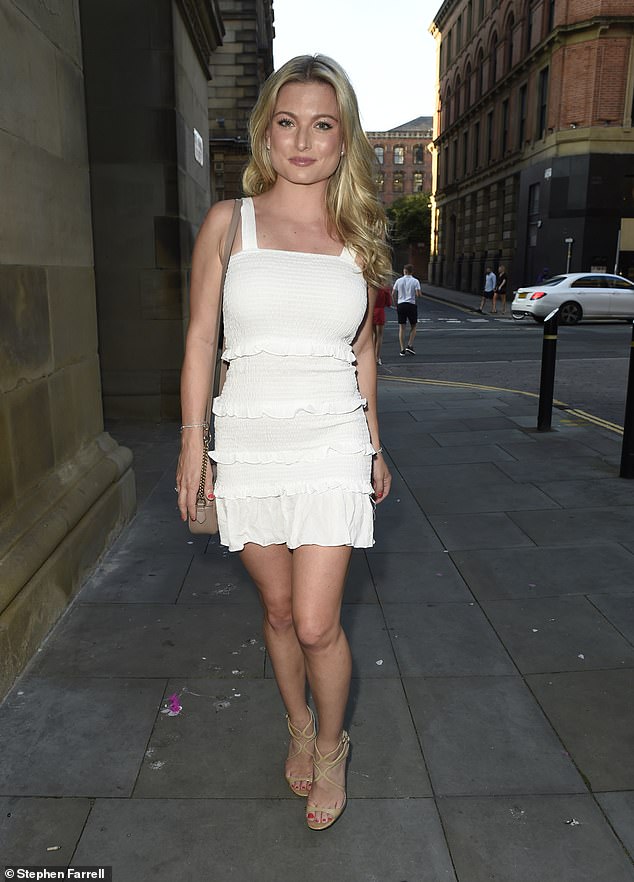 Standing out: Zara Holland, 25, was in high spirits as she enjoyed dinner at Peter Street Kitchen Restaurant in Manchester on Saturday

Zara showed off her toned figure in the flirty dress that boasted several frilled layers, which she teamed with the muted accessories.

She opted for a matching taupe handbag as she posed outside the swanky eatery.

It comes after Zara showcased her incredible physique as she shared a stunning bikini snap ahead of the premiere of series seven of Love Island last month.

The reality star who appeared on the second series of the ITV2 show, looked sensational in an orange and red striped two-piece. 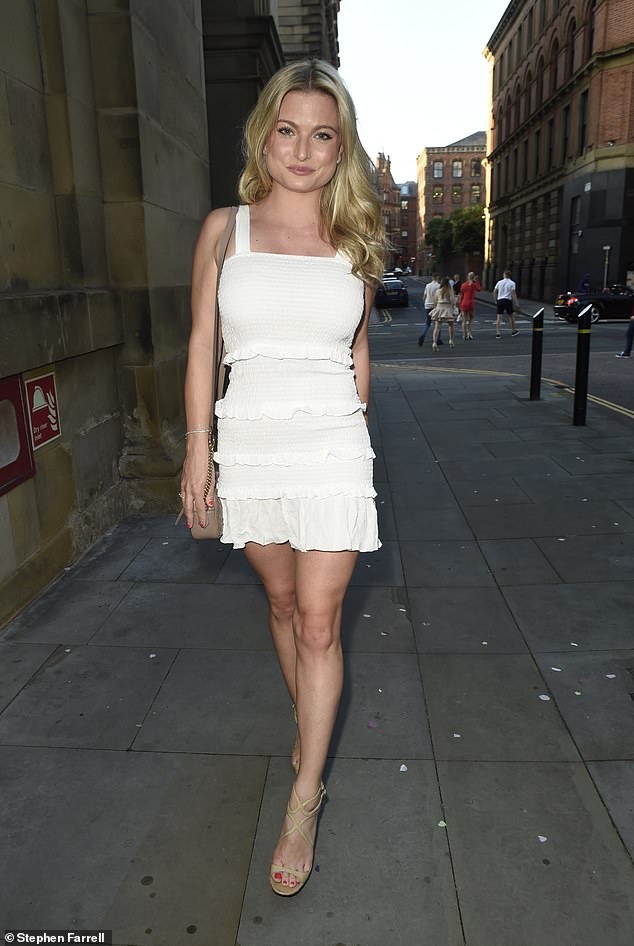 Ethereal: The Love Island star opted for a flirty cream mini dress and gold strapped heels as she stepped out for the evening 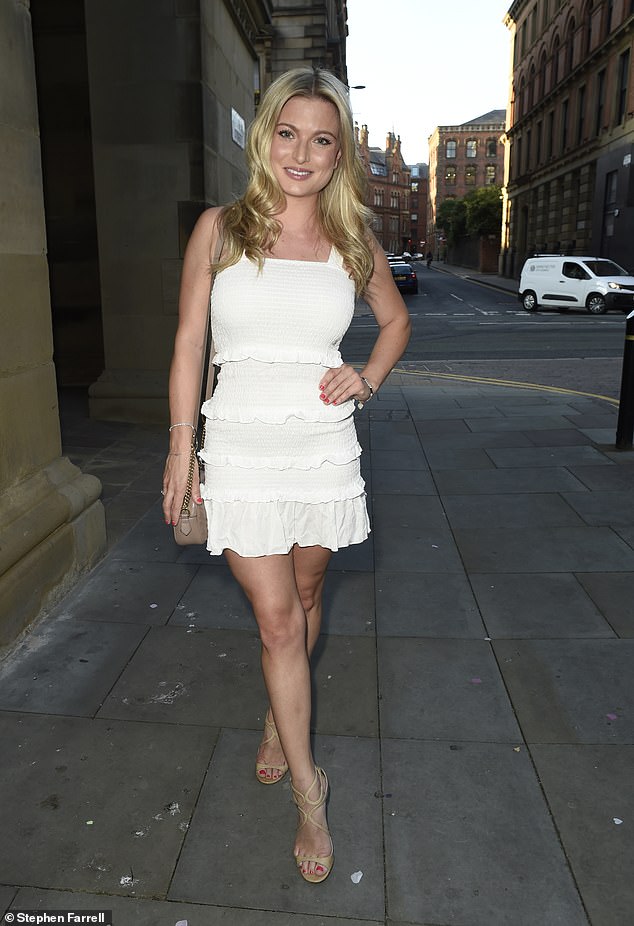 Stunning: Zara showed off her toned figure in the flirty dress that boasted several frilled layers, which she teamed with the muted accessories 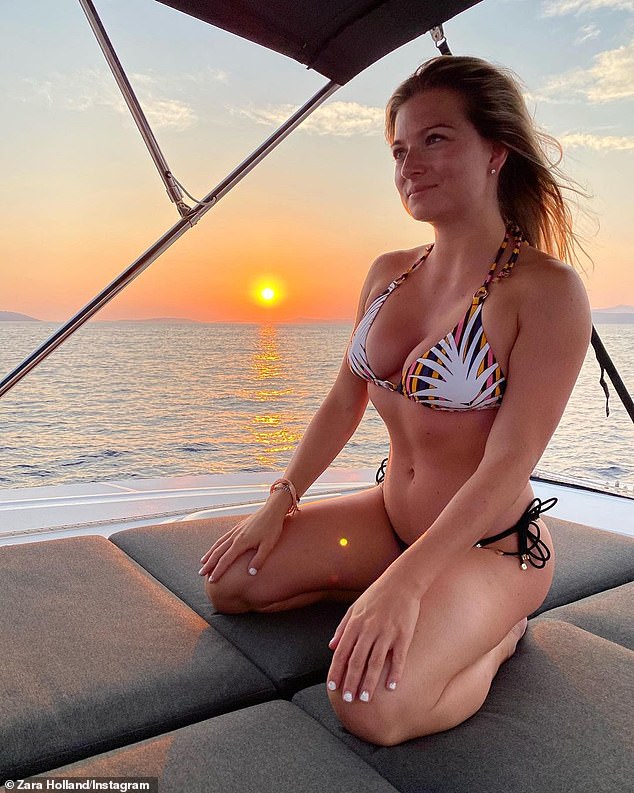 Wow: Zara Holland showcased her incredible physique as she shared a stunning bikini snap ahead of the premiere of series seven of Love Island on Monday

The garment also featured a white palm print with Zara displaying her toned physique as she relaxed on a boat.

The former Miss Great Britain let her blonde locks fall loose down her shoulders in the snap while she also sported a pair of gold earrings.

Showcasing her natural beauty in the post, Zara looked incredible as she posed in front of a sunset.

Zara and her partner Elliot Love, 30, were intercepted at Barbados airport and faced a jail sentence of up to a year, before both being let off with fines. 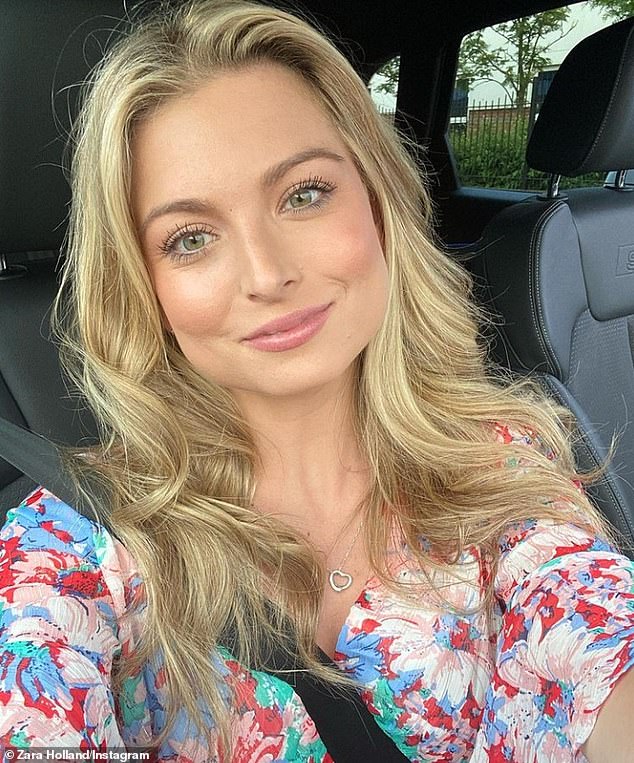 Drama: Zara has been keeping a low profile after she paid a £4,500 fine in the Caribbean earlier this year for trying to flee Barbados despite her boyfriend testing positive for Covid

In early January, Zara was believed to have returned home without her partner, when she was seen sat alone before boarding a Virgin Atlantic flight to Manchester at the Grantley Adams International Airport.

Meanwhile, her boyfriend Love was forced to stay in the island’s mosquito-ridden Paragon Isolation Centre until he was clear of the virus and had to pay a heavy fine to the country.

Following the offence Love managed to escape jail and received a reduced fine after his lawyer argued he was a ‘simple guy’, who owned a small demolition company and worked for £450-a week.

Love was fined £1,400 less than his famous girlfriend – despite him being prepared to get on a packed holiday jet while infected with the virus.

Zara was ordered to pay a heftier fine before fleeing the country due to her compliance in the offence, despite not testing positive herself. 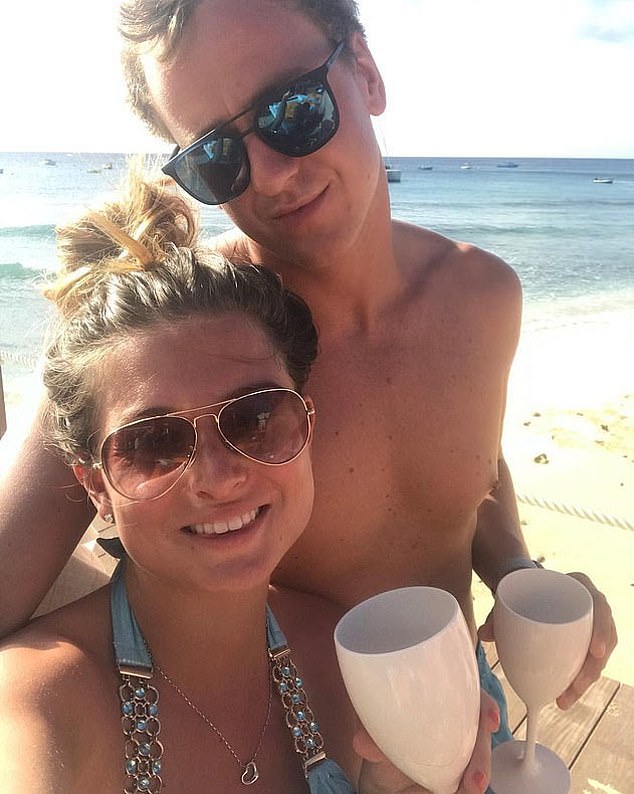 Scandal: Zara and her partner Elliot Love, 30, were intercepted at the island’s airport and faced a jail sentence of up to a year, before both being let off with fines

The former Miss England jetted back to Britain just hours after she was ordered to pay her fine or go to jail for nine months for breaching the island’s tough Covid rules.

One fellow traveller said: ‘She was sitting well away from everyone else and trying to keep a very low profile. To say she looked sheepish is an understatement.

‘We were shocked to see her because we know her boyfriend is still being detained while he battles Covid. I’m amazed she’s left him behind.’

Love had to test negative twice for the virus over the space of five days before he was allowed out of the military base which has been turned into a coronavirus quarantine centre.

Zara, of North Ferriby, East Yorks, could have been jailed for up to a year but the magistrate instead imposed the fine, which many on social media condemned as a let off. The fine was paid immediately by her lawyer meaning she was free to leave. 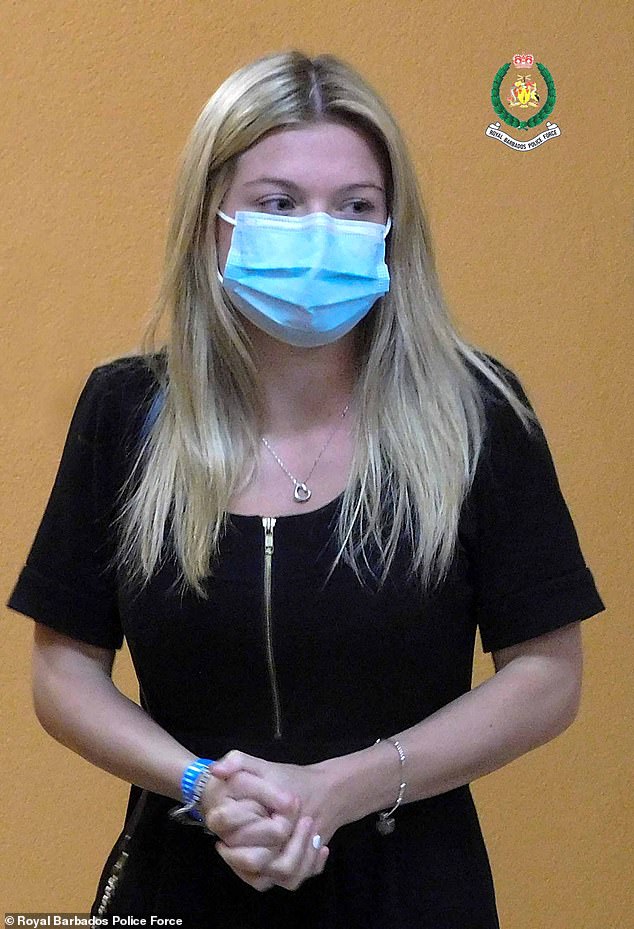 Homeward bound: At court, the shaken TV star had blamed her actions on a ‘foolish error’ and breathed a sigh of relief when she escaped with a fine of GBP 4,417 [B$12,000]

A guest who had been staying at the luxury Hilton hotel, where Holland holed up after being intercepted, spotted the former beauty queen scurrying out of the £350-a-night hotel several hours after she left court.

Andrew Pilgrim QC, Zara’s lawyer, told MailOnline at the time: ‘Zara left Barbados last night. The fine has been paid and she was free to go.’

She had pleaded guilty to leaving the Sugar Bay hotel on December 29 while she was under quarantine.

Chief magistrate Ian Weekes admonished her for breaking the nation’s tough rules that have prevented the holiday island being overrun by the virus. 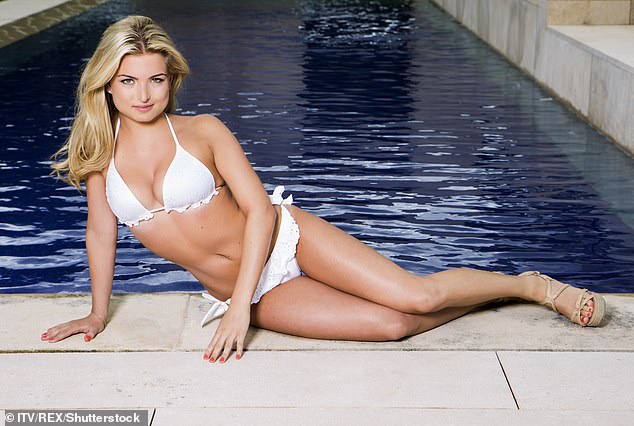 Fame: Zara soared to fame on the 2016 series of Love Island (pictured in show still)

‘We cannot tolerate that you breached the quarantine protocol, he said. ‘You had been told to stay at your hotel and you should have done that.’

Mr Pilgrim blamed her ‘lapse’ on a ‘foolish error,’ telling the court she had two negative tests and became extremely nervous about her and Love’s status in Barbados, which is why she decided to try and leave the island.

Love had already tested positive for Covid when the pair bought return flights to the UK.

Mr Pilgrim told the court Zara was involved in a lot of charity work in the UK, including helping children with cancer, and also helped with transportation for people in need.

He said she had the utmost respect for the people of Barbados and had been holidaying on the island twice a year for the last six years.

Zara remained silent when she left court but stood beside Mr Pilgrim as he spoke on her behalf.

He said: ‘We accepted the decision of the court. Miss Holland wants to express her sincere apologies to the entire nation of Barbados.’

Love tested positive for Covid after arriving on the island. The couple were given red wristbands and told to remain in their room at the £300-a-night Sugar Bay until they were taken to a quarantine centre on the north of the island.

Instead, they booked would have been a British Airways flight back to the UK packed with fellow British holiday makers, cut off their wristbands and took a taxi to the airport where, according to a local source, their names raised some red flags with airport officials because of their short turnaround time in the country.

They were intercepted as they made their way to departures after surveillance cameras captured the pair entering public bathrooms and exiting wearing different clothing.

Prior to this, Jamaican tourist Dean George Scott, 49, admitted in court to leaving quarantine to ‘buy Fanta’ and other snacks after arriving on the holiday island at the beginning of December. He was jailed for six months. 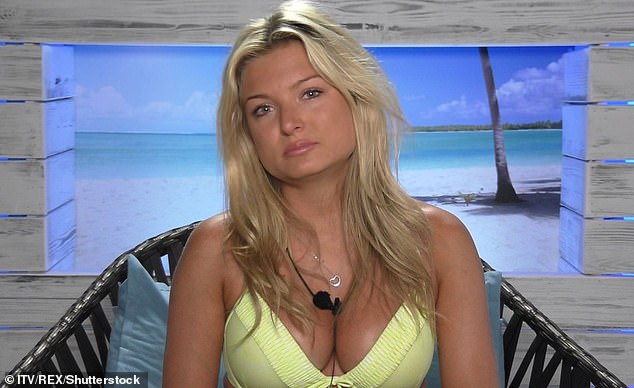 Fine: Zara jetted back to Britain just hours after she was ordered to pay her fine or go to jail for nine months for breaching the island’s tough Covid rules (pictured on Love Island)