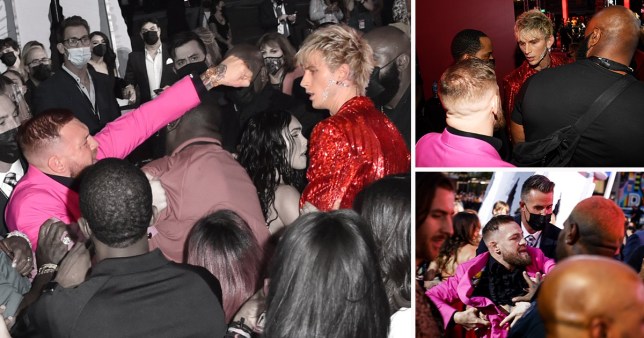 Machine Gun Kelly and Conor McGregor got into a little scuffle at the VMAs (Picture: Rex Features, Getty Images)

Machine Gun Kelly has reportedly asked for his security to be ‘ramped up’ after he was confronted by Conor McGregor at the MTV Video Music Awards on Sunday.

It all kicked off when the Bad Things rapper arrived at the star-studded awards ceremony in New York on Sunday with his actress girlfriend Megan Fox.

In footage from the red carpet, it appeared as though Conor, 33, spotted MGK, 31, and hurled a drink in his direction sparking the brawl.

Conor was pictured raising a clenched fist in the air as security attempted to separate the UFC champion from the American rapper.

A source who was present during the incident has now told Metro.co.uk that MGK, real name Colson Baker, didn’t want to meet Conor as he wasn’t a fan of some of the sports star’s past controversial comments, although it was not specified which ones.

They said: ‘Machine Gun Kelly isn’t a fan of some things Conor has said and done in the past so thought it was a bad look to be photographed with him.

‘It’s the VMAs so part of the reason you go is to mix with other celebs but some of Conor’s comments on sensitive issues have never sat right with him.’

A source claimed MGK wasn’t a fan of some of Conor’s past comments (Picture: Rex Features, EPA)

The insider, who is close to MGK, added that the musician ‘told organisers to make sure their paths never crossed after the fall out’.

Shortly after the incident, Conor bizarrely suggested the altercation didn’t even happen despite the photo and video evidence.

MGK’s girlfriend Megan Fox found herself caught up in the drama (Picture: Mega)

‘Nothing happened with me, I only fight real fighters, people that actually fight, you know what I mean.

‘I certainly don’t fight little vanilla boy rappers. I don’t even know the guy. I don’t know anything about him, except that he’s with Megan Fox.’ 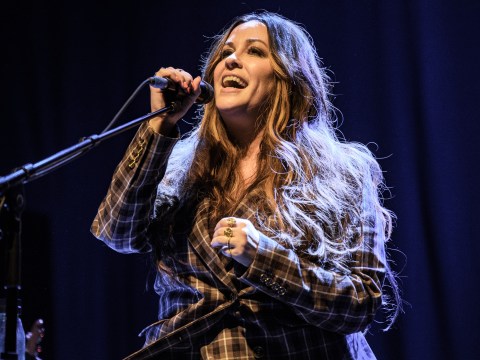 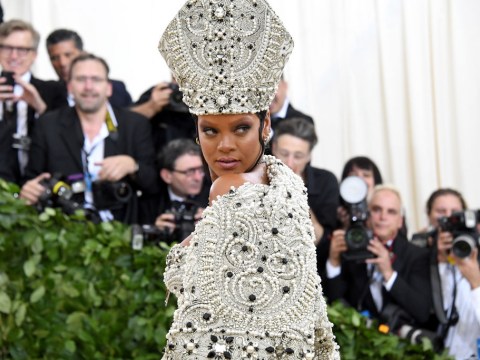 A Variety reporter tried to ask MGK what happened immediately after the incident during a red carpet interview but the rapper smacked the microphone away and walked off with Megan, clearly unwilling to discuss the tension.

It was thought that MGK was previously a fan of Conor after he and Megan were seen attending his UFC fight with Kourtney Kardashian and Travis Barker in March, but it’s possible he was supporting the fighter’s American opponent Dustin Poirier.

Metro.co.uk has reached out to Machine Gun Kelly’s rep for comment.