Davidson, 27, and Chloe Fineman, 33, played MGK and his girlfriend Megan Fox on last week’s episode of the variety show, and even donned an exact replica of the outfit the couple sported at the 2021 iHeartRadio Music Awards.

Though according to the rapper, 31, Davidson, 27, did not exactly nail the impression. 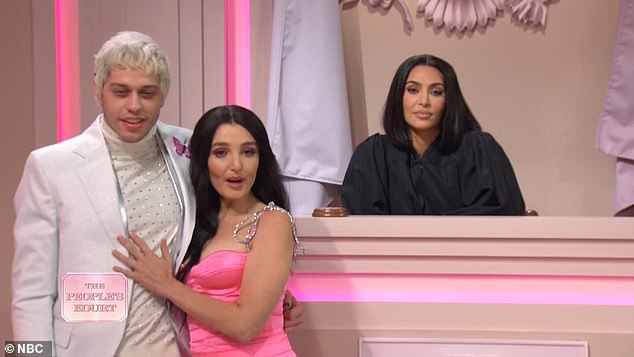 ‘You know d**n well I don’t talk like that’: Machine Gun Kelly hilariously called out Pete Davidson after the actor impersonated him on Saturday Night Live

‘Pete you know d**n well I don’t talk like that,’ Machine, real name Colson Baker, posted on his Instagram Stories beside video of the sketch.

Turns out Kelly was in on the sketch the whole time, according to a subsequent photo showing Davidson FaceTiming the musician while in costume.

The hit-maker laughed at the sight of Pete wearing a head full of white hair, suit, and pink butterfly clip.

‘Twins,’ he wrote in the photo. 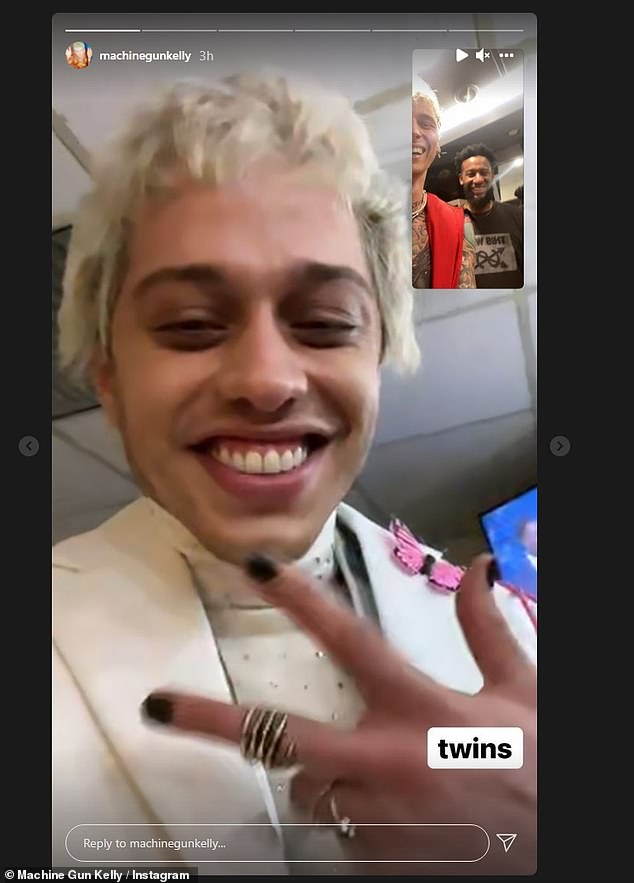 He was in on it: MGK also posted a FaceTime screenshot of himself laughing at the site of Pete dressed as him

On Twitter, Kelly suggested Pete get a taste of his own medicine.

‘i think it’s time for me to come on the show as Pete @nbcsnl,’ he posted, tagging the variety show. 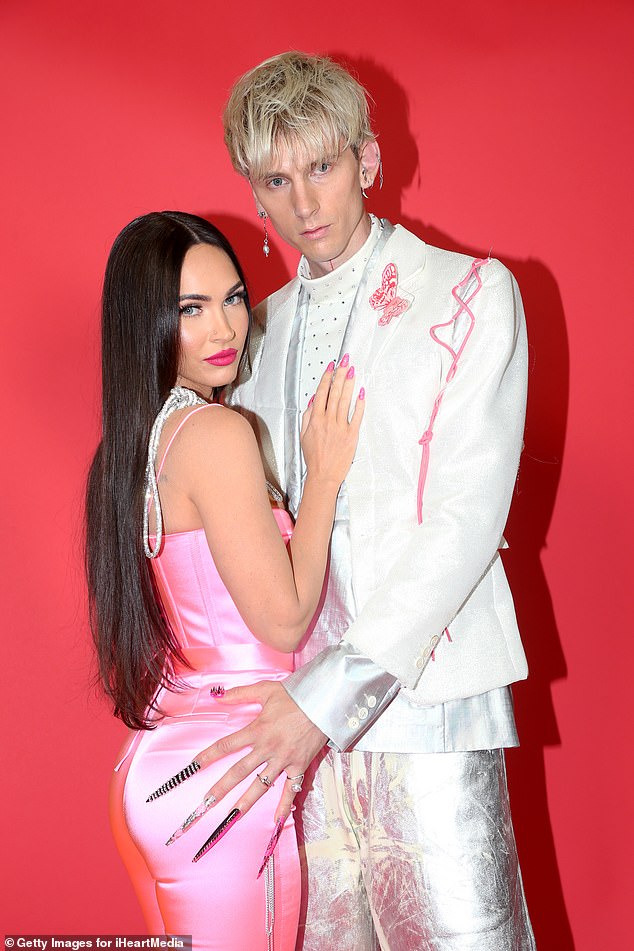 The real deal: The actors wore an exact replica of the outfit MGK and Fox wore at the 2021 iHeartRadio Music Awards 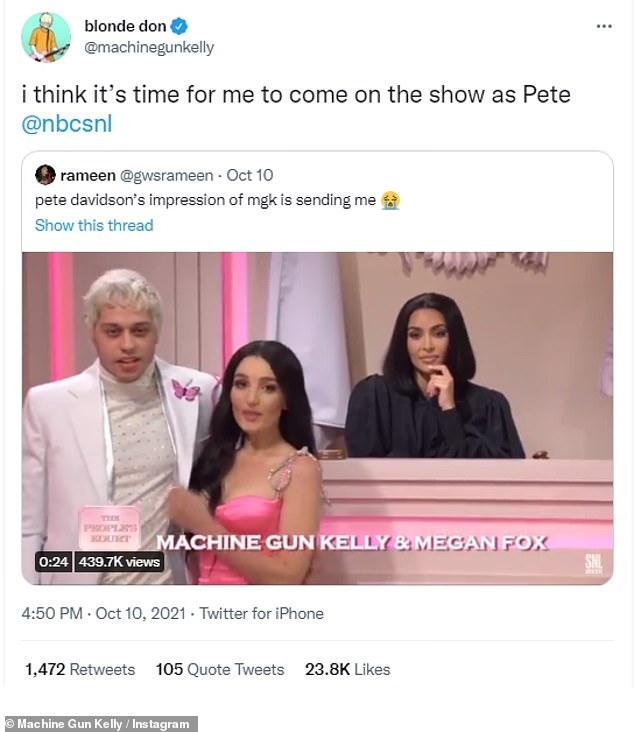 Now is your turn: On Twitter, the rapper suggested Pete get a taste of his own medicine

Machine and Megan were introduced as Kourtney’s best friends and court bailiffs.

In a deep voice that did not resemble Machine, Pete said as he appeared on stage, ‘Hey, hey what’s up.’

‘Wait, why are we best friends?’ Megan, aka Chloe, asked.

‘Because our boyfriends have tattoos for necks,’ Kim replied. 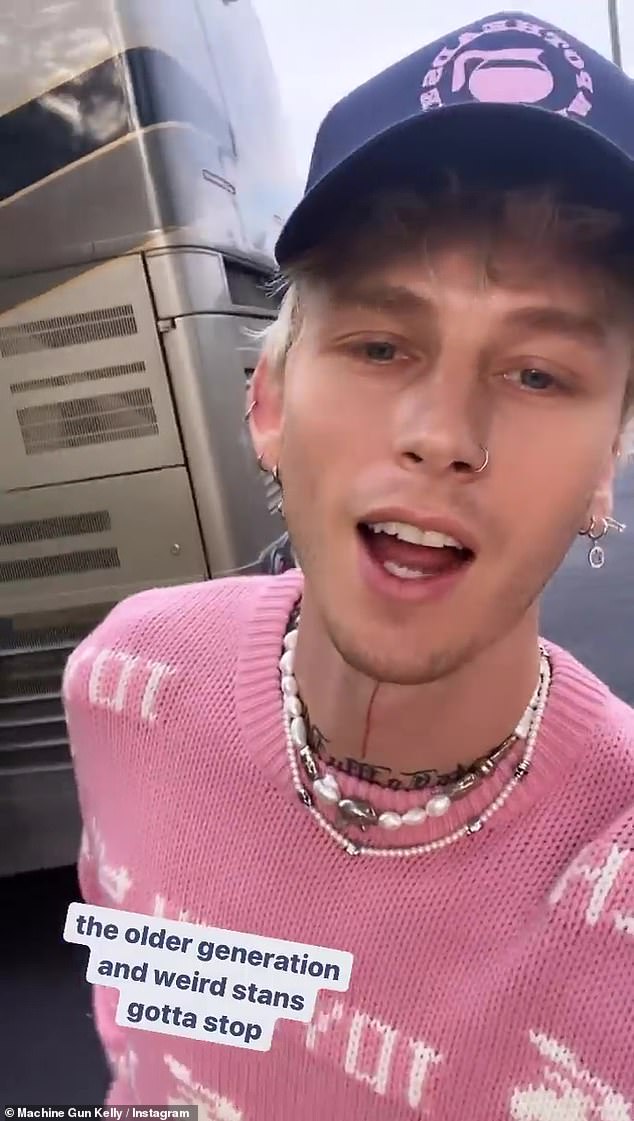 Calling it out: ‘i think it’s time for me to come on the show as Pete @nbcsnl,’ he posted, tagging the variety show