Malin Andersson has announced that she’s got a mystery boyfriend, gushing that he is her ‘best friend and soulmate’.

The Love Island star, 28, shared a stunning bikini snap of herself holding her new beau’s hand in St. Lucia to Instagram on Sunday.

Revealing that she’s known her love for ‘five years’, Malin said that she’s ‘so excited for the future’ and ‘couldn’t be more content and at peace’. 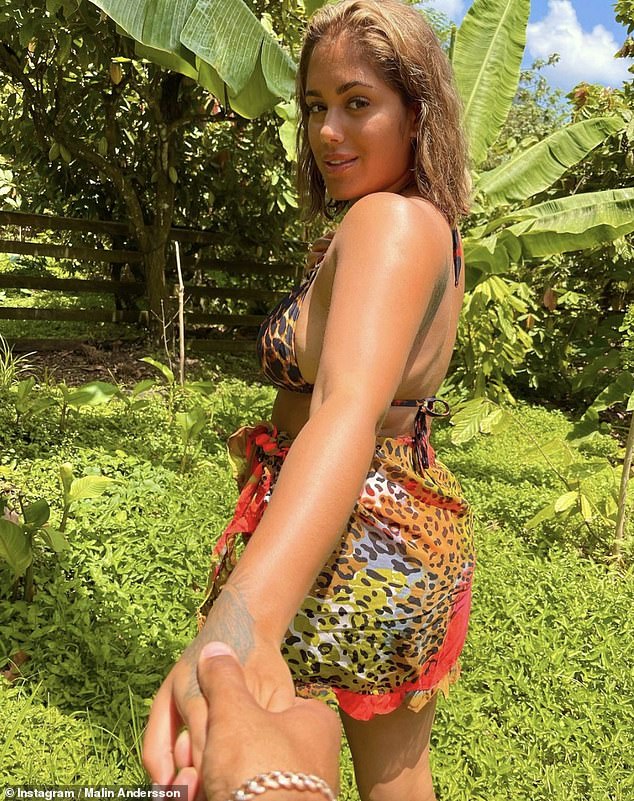 New love: Malin Andersson has announced that she’s got a mystery boyfriend, gushing that he is her ‘best friend and soul mate’ while sharing a sizzling bikini snap to Instagram

She flashed a smile for the camera while looking over her shoulder and teased a tiny glimpse of her partner’s hand, with her beau wearing a silver bracelet.

Alongside the sun-soaked snap, Malin penned: ‘Life has a funny way of making sure you truly do get what you deserve in the end…

‘I’m out here in St Lucia with not just my best friend but my love too.. a lot of you are wondering who this mystery guy is. And I’m going to keep it just like that, as this bit of happiness deserves my privacy in which I will cherish for now. 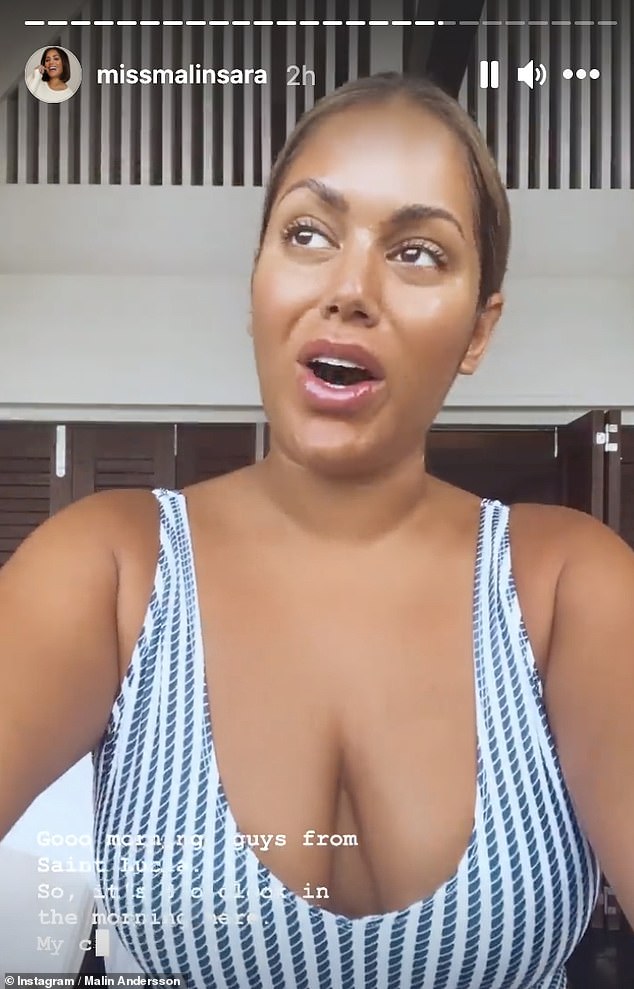 Happy: The Love Island star, 28, explained that she’s known her beau for five years and looked radiant as she kept fans updated with her idyllic trip to St. Lucia on Tuesday

‘I’ve known him for 5 years and we have always been friends, and also in and out of each other’s lives.. he’s also been the one that’s got away.. but he’s here to stay and I couldn’t be more content and at peace.

‘It’s weird how it’s all worked out as the ones that care for you the most, you tend to push away.. but timing has been everything in this.

‘My soul mate, bringing only the best out in me and helping me on my forever journey of healing. He knows every inch of my soul and what I’ve gone through, and has been there throughout which is what makes this so special.

‘It’s safe to say it feels surreal and I’ve had a hard time of opening up and letting my guard down, but I know this ones deserving of me (to all my precious fans, I love you and adore you so please don’t worry about me getting hurt as i’m 100% sure I won’t) 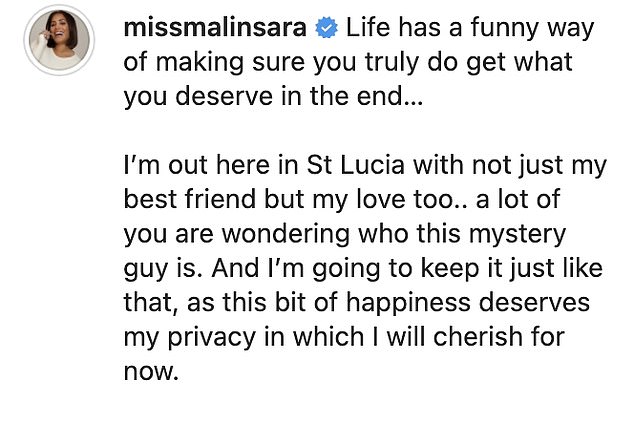 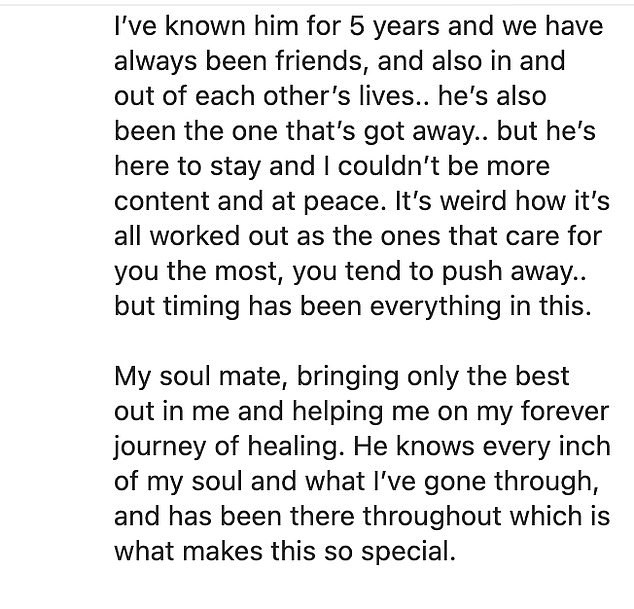 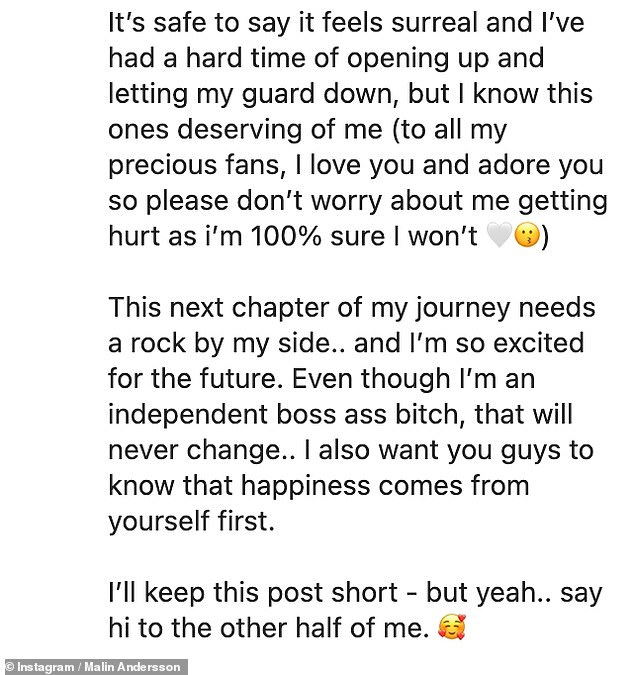 Excited: Malin said she was looking forward to the future with a ‘rock by my side’ and told fans she would be keeping her new man’s identity a secret

‘This next chapter of my journey needs a rock by my side.. and I’m so excited for the future. Even though I’m an independent boss ass b***h, that will never change.. I also want you guys to know that happiness comes from yourself first.

Malin is back in sunny St. Lucia following an earlier trip in May and jaunt back to the UK at the beginning of June where she enjoyed a spa trip with a pal in Staffordshire after quarantining.

The body confidence adovcate was last linked to tattoed-faced beau Michael Sadler, who she dumped in April when she found out he had a secret pregnant girlfriend.

The devastated star ended the 18-month romance after his partner of seven-years Rebecca Barr, 38, contacted her to reveal he has four children and one that’s due in August. 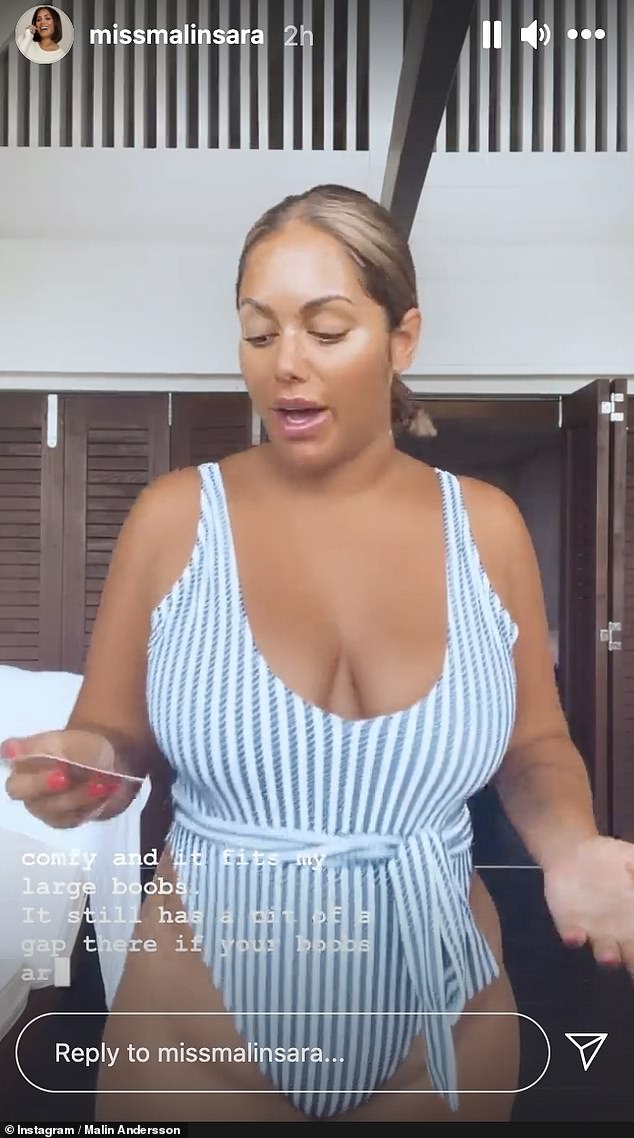 Stunning: The brunette beauty rocked a striped swimsuit with a tie-waist detail on Tuesday 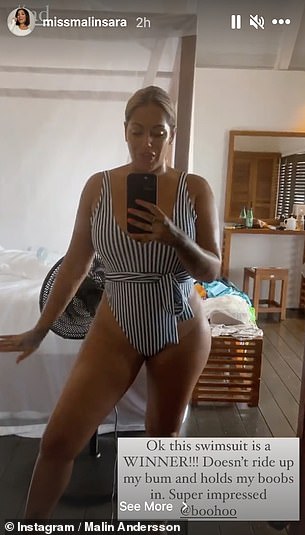 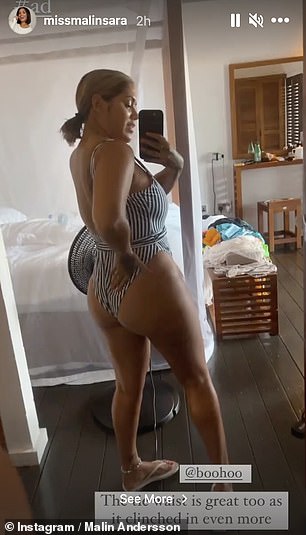 Poser: She ensured to work all her angles while showing off the sexy swimwear in her mirror

Malin told MailOnline at the time: ‘I am just terrified at the level of narcissism, the lies, and everything that’s happened.

‘To everyone else he’s so lovely, but he needs to be exposed. In my soul I cannot let another women go through what I’ve been through for seven years.’

The same month Malin revealed also she had suffered a miscarriage – two years after her four-week-old daughter Consy passed away.

Malin has always been very candid about her relationships and has often spoken about her experience with domestic abuse.

The Love Island star’s former partner Tom Kemp, 28, was jailed for 10 months for an assault that left her ‘black and blue’ last September.

He admitted to assaulting the reality star, which left her with a broken her hand. 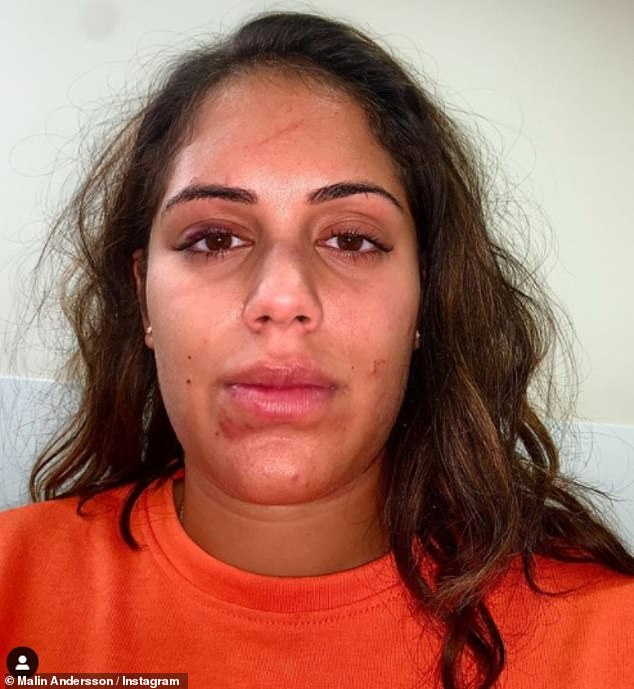 Powerful: It comes after Malin shared a throwback snap of herself with a bruised and cut face as she penned a powerful domestic violence post in May

Tom was released in December after three months and will serve the rest of his term on Home Detention Curfew.

Tom was the father of Malin’s baby girl Consy, who tragically died with a heart defect in January 2019, just one month after being delivered at 33 weeks.

She’s since had time to reflect on her relationship with Tom and says they formed a ‘trauma bond’ amid her grief and depression at the loss of her mum.

In June 2020, Malin spoke about the abuse and emotional torment she suffered while being in the on/off relationship during 2018. 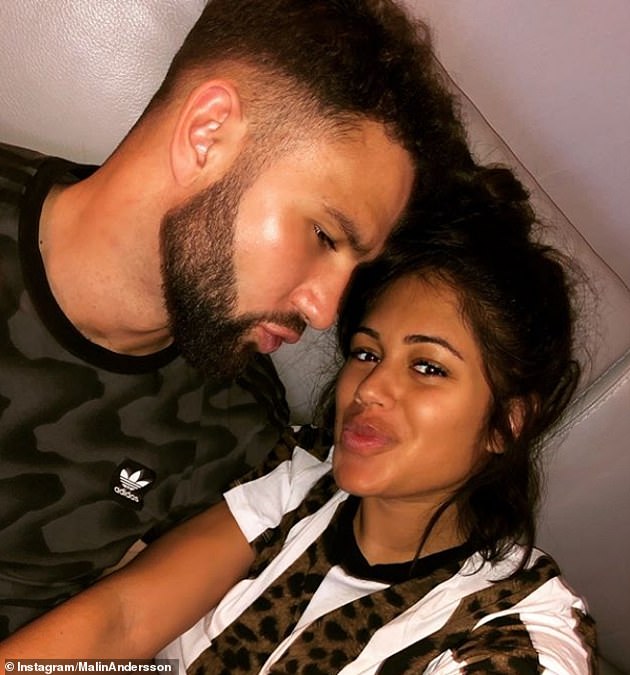 Abuse: The reality star’s former partner Tom Kemp, 28, was jailed for 10 months for an assault that left her ‘black and blue’ [pictured together in February 2019]

She said: ‘It started with things being thrown in my face out of anger – food, bottles of water, whatever was in his hand, all out of anger.

‘He switched from zero to 100 within seconds. Once they think they can do that to you, it escalates.’

And last month, Malin shared a throwback snap of herself with a bruised and cut face as she penned a powerful domestic violence post.

She recalled the abusive names and horrendous insults she received amid her abusive relationship, with the star adding that she was ‘none of the above’.

Malin also shared a list of pleas and thoughts that she had at the time of her ordeal, as she then stated: ‘I was once this young woman. And now I am thriving.’

If you have been affected by this story, contact Women’s Aid at www.womensaid.org.uk. 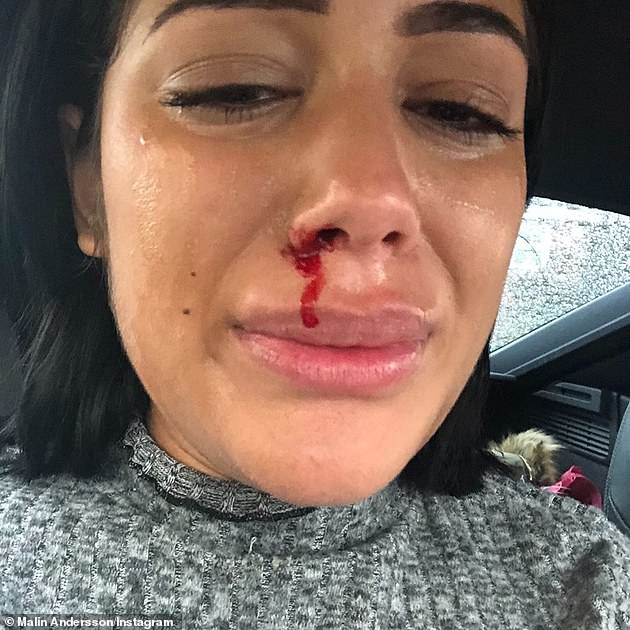 Trauma: Her ex was imprisoned last September after he admitted to assaulting the reality star, which left her with a broken her hand