Tobin Heath’s late strike put the fire back into Arsenal’s title charge as they salvaged a 1-1 draw at Manchester City.

It had been a miserable start to 2022 for the Gunners with a defeat against bottom club Birmingham before a 1-0 Continental Cup loss against Manchester United last week.

The Gunners had lost their last three games in all competitions and had not scored since new signing Laura Wienroither turned the ball into her own net while playing for Hoffenheim in December.

But former United forward Heath, back in the side after a spell out through injury, stole a point in the second minute of added time after Khadija Shaw had put City ahead in controversial circumstances.

The ball hit referee Abigail Byrne in the build-up and FA rules state the game should have been stopped. It wasn’t and City scored. Arsenal were understandably livid and manager Jonas Eidevall was booked for his protests.

‘Games like this are going to be decided by small margins. The referee can also understand why we got very upset.’

The day had looked promising for the Gunners after title rivals Chelsea were held to 0-0 draw by Brighton.

The real winners of the weekend were Manchester United, who are now second after a 3-0 victory over Spurs.

City were minutes away from being joint third yesterday after a challenging season hit by injuries. They had 17-year-old Khiara Keating starting in goal for only her second appearance in the WSL. The youngster made her league debut in last weekend’s victory over Aston Villa after Karima Taieb picked up a knock.

Taieb is third choice but she has been the only fit senior gaolkeeper at the club this season due to injuries to Ellie Roebuck and Karen Bardsley. Such is the crisis at the club, 16-year-old Grace Pilling, who is still in school, was the reserve option on the bench. 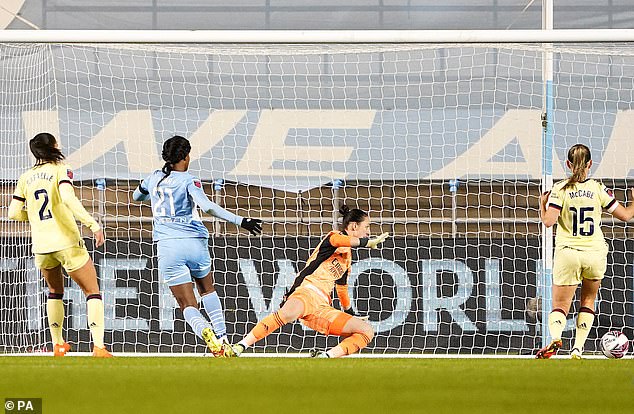 It was a nervy start by Keating as a mix-up with Steph Houghton almost presented Arsenal with the opening goal.

The two collided as they went for the same ball, which fell at the feet of Beth Mead but Alex Greenwood got back to make a vital goal-line clearance.

Keating was back in action moments later as she got down smartly at her near post to save an effort from Vivianne Miedema. That stop seemed to give the youngster some confidence as her distribution improved throughout the half. 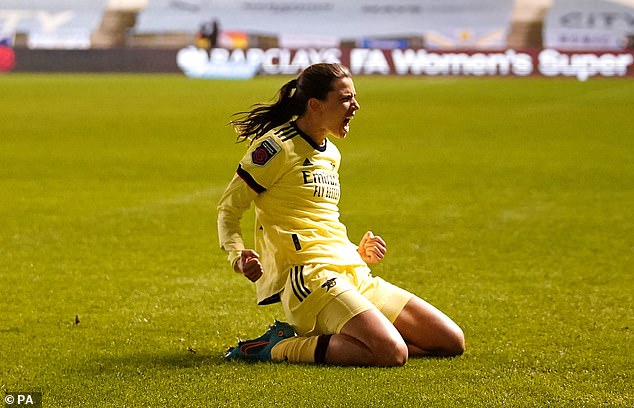 City’s best chance of the first half came when Greenwood’s free-kick found the head of Lucy Bronze but the defender could only send an effort over the top of the bar. There was another important stop from Keating at the start of the second half as she got a strong hand to a shot from Mead.

At the other end, Jess Park tested Manuela Zinsberger before firing another chance over the bar. City were on top and in the 65th minute they broke the deadlock.

Bronze’s pass to Caroline Weir hit referee Byrne and fell kindly for Demi Stokes, who played in Hemp down the left. The winger then picked out Shaw in the middle and she guided the ball past Zinsberger. Arsenal were running out of steam and City almost grabbed a second when Hemp’s low effort was saved.

When it looked like City would see out the remainder of added time, Heath ghosted in at the back post to drive a low shot into the far corner.

It could be a huge turning point for Arsenal. City are still in the race but will feel this was two points dropped.

Emma Hayes became just the second English manager to be named Coach of the Year at the FIFA awards. Hayes admitted she was ‘completely shocked’ and she was not the only one, with former Barcelona boss Lluis Cortes looking rather put out by the result. At least he was nominated. Canada boss Bev Priestman, who led her country to a gold medal at the Olympics, was not even in the running.

The real controversy was the FIFPro World XI — which did not include any of the three players nominated for the main award. That was won by Alexia Putellas but the Barca midfielder, her team-mate Jenni Hermoso and Chelsea’s Sam Kerr were all missing from a team that found room for Alex Morgan, Carli Lloyd and Marta. All three are legends of the women’s game but the best players last season, really? Perhaps they just have the best PR teams.

Sam Kerr is now Australia’s all-time leading scorer after her five goals against Indonesia in the Asia Cup took her tally to 54, surpassing Tim Cahill’s record of 50. However, the Matildas 18-0 victory again highlighted the issues of mismatches in women’s international football. Indonesia are the lowest-ranked nation at 94th in the world but still qualified. Neither team gain anything from cricket scores.

West Ham were forced to eject a supporter following a homophobic chant during the Conti Cup game against Chelsea. The women’s game prides itself on inclusivity and the club dealt with the issue swiftly. There will hopefully not be a repeat when the two teams meet again in the league next week.

Manchester United will be without Millie Turner for an indefinite period after an issue with the artery in her neck was discovered. The defender will take part in modified training and continue to be assessed by the club’s medical team in the coming weeks and months.