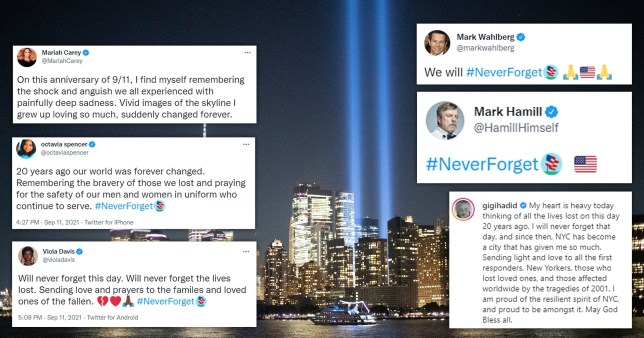 Stars shared tributes 20 years on from the the attacks (Picture: Getty)

Celebrities around the world have marked 20 years since the 9/11 terror attacks, sharing tributes for those we lost.

As the world remembers those we lost, many stars have also paid tribute.

Mariah Carey wrote: ‘On this anniversary of 9/11, I find myself remembering the shock and anguish we all experienced with painfully deep sadness. Vivid images of the skyline I grew up loving so much, suddenly changed forever.

‘Still astonished by how many innocent people were lost in an instant, gone forever but never to be forgotten. Thinking of all the families still mourning their loved ones 20 years after that devastating and tragic moment in our history.’

Mark Wahlberg, who narrowly missed flying on one of the hijacked planes, shared a photo of the 9/11 Memorial Museum, adding the caption: ‘We will #NeverForget’.

Michelle Visage shared a photo of the Twin Towers, writing: ‘As an American. As a New Yorker. As a human. Lest we forget…..’

Ryan Seacrest added: ‘Remembering those who lost their lives and those whose lives were forever changed on this day 20 years ago. Never forget.’

Gene Simmons shared a video from the 9/11 memorial ceremony and wrote: ‘Never Forget. 9/11 should be taught in schools.’

Gigi Hadid, who was only a young child when the attacks happened, wrote: ‘My heart is heavy today thinking of all the lives lost on this day 20 years ago.

‘I will never forget that day, and since then, NYC has become a city that has given me so much.

‘Sending light and love to all the first responders, New Yorker’s, those who lost loved ones, and those affected worldwide by the tragedies of 2001 [sic].

‘I am proud of the resilient spirit of NYC, and proud to be amongst it. May God Bless all.’

Octavia Spencer said: ’20 years ago I was excited because I was guest starring on the sitcom TItus.

‘I was up early running lines when my youngest sister called and said, ‘turn on your tv, we are under attack.’

‘I put on the Today show just as the first plane hit the tower. I called all of my LA friends and we watched in horror.

‘I will never forget and mourn the loss of so many lives. Where were you that morning?’

‘Sending love and prayers to the families, loved ones of the fallen.’

Mark Ronson shared a personal story from the day the attacks happened, writing: ‘9/11/2001 I was sitting on an AA flight 8am JFK to LAX when the captain said “there’s been a fire @ the WTC, we’re headed back to the gate to deplane”. I’ll never forget the panic, shock, despair & horror in the airport as people managed to call home & find out what was happening.

‘They immediately shut down all the bridges and tunnels into the city so I stayed in Brooklyn that night at my dear friend Toure’s. Like everyone else, we watched the footage over and over, speechless. I remember watching the smoke and dust clouds from Fort Greene helpless like it was another planet.

‘The next few days, there was a huge overflow of people trying to volunteer and help. I already lived only 10 blocks from the towers, so I could get past the last checkpoint to volunteer without registering.

‘I walked up and down the West Side Highway with a trolley cart of supplies and water and gave every last coat and sweatshirt I owned to emergency responders drenched in water, soot, etc… This obviously doesn’t compare one billionth to what so many gave on that day. 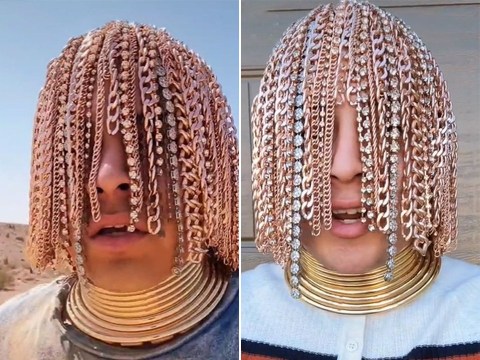 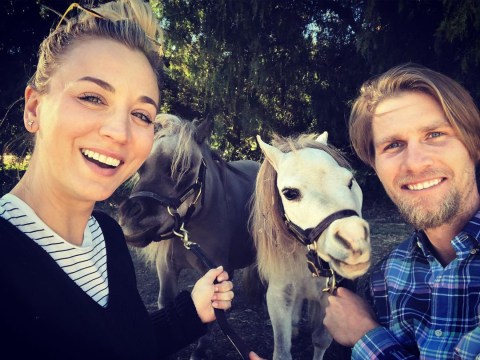 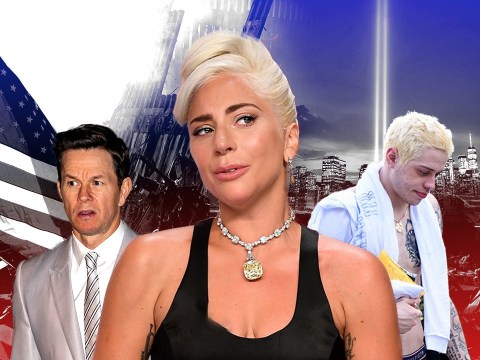 ‘I feel some sort of need to observe the loss and sacrifice of an unfathomably horrid event but I still can’t quantify it. What I do know is that it brought out the very best parts of the citizens of the greatest city in the world.

‘For those who lost and sacrificed that day, you are forever in the souls and conscience of New Yorkers. Sending love to anyone still grappling with the tragedy of that day. We salute you.’

MORE : Steve Buscemi opens up about dealing with PTSD from joining search for the missing after 9/11

MORE : 13 celebrities who were personally affected by 9/11