It’s a prefect example of turning a poison into a positive.

On Thursday, the Thanksgiving holiday, Blink 182 bassist and co-lead singer Mark Hoppus sounded overjoyed to be able to give thanks for his health, five months after going public with his stage-four cancer diagnosis.

And he shared his thankfulness by posting a photo of himself sitting in front of a toilet, to reference the struggles he went through while undergoing five rounds of chemotherapy treatments to ultimately be able to announce he was cancer-free. 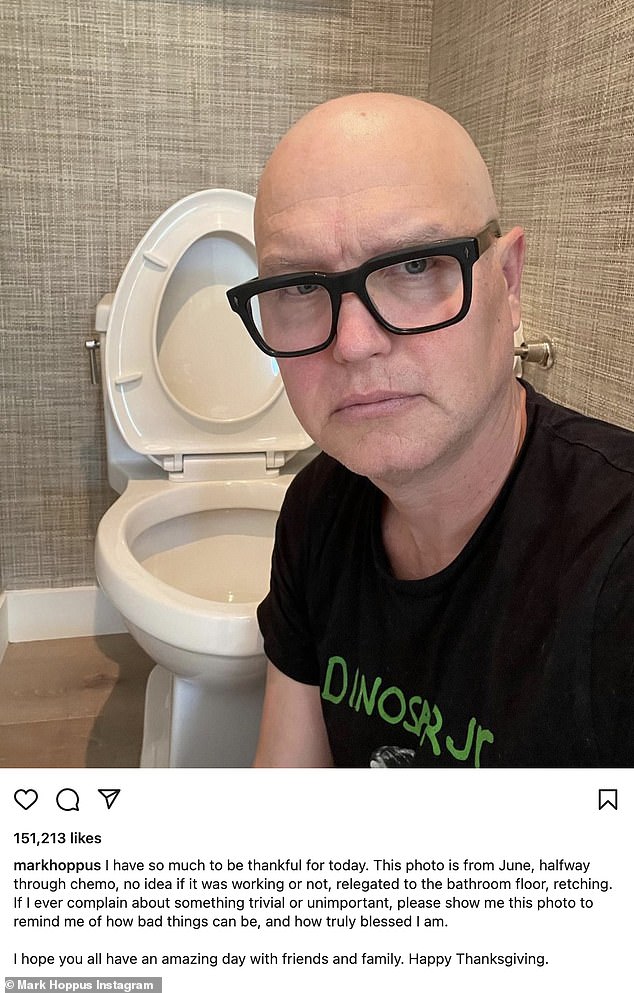 Poison into positive: Mark Hoppus shared a photo of himself sitting in front of his toilet, at his worst during chemotherapy treatments, when he gave thanks on Thanksgiving, as a reminder of how bad things can get in life

‘I have so much to be thankful for today,’ the Feeling This musician began in.the caption, before sharing the details

‘This photo is from June, halfway through chemo, no idea if it was working or not, relegated to the bathroom floor, retching.’

Hoppus, 49, then shared how the harsh reaction to chemo has given him a new perspective on just how bad things can get, and what truly matters in his life.

‘If I ever complain about something trivial or unimportant, please show me this photo to remind me of how bad things can be, and how truly blessed I am.

He ended the post by wising everyone ‘have an amazing day with friends and family. Happy Thanksgiving.’ 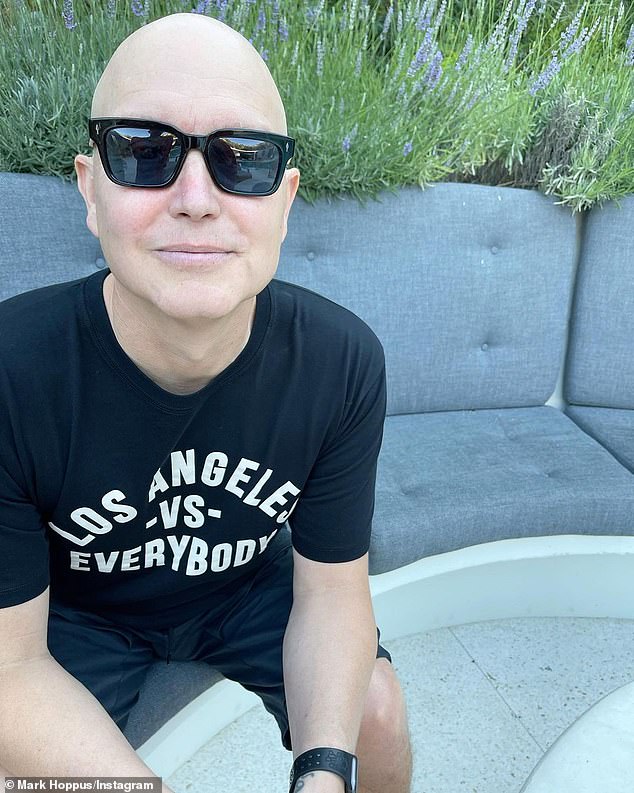 Health crisis: In June, Hoppus announced he was diagnosed stage four diffuse large B-cell lymphoma, and that he was undergoing chemotherapy 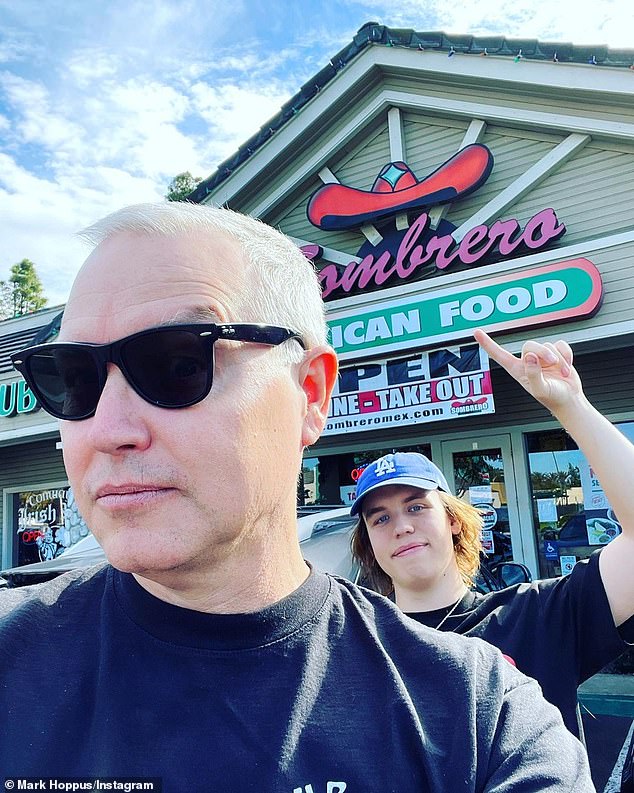 On the upside: The Blink-182 star revealed he was ‘cancer-free’ in late September; he is pictured with his son Jack outside a Mexican restaurant

In June, Hoppus went public and announced he had been diagnosed with stage four diffuse large B-cell lymphoma, which is one of the most common subtypes of non-Hodgkin’s lymphoma.

Lymphoma is a cancer of the lymphatic system, which is part of the body’s germ-fighting network. The lymphatic system includes the lymph nodes (lymph glands), spleen, thymus gland and bone marrow. Lymphoma can affect all those areas as well as other organs throughout the body, according to the Mayo Clinic.

He would open up more about his cancer during a Twitch livestream in July, where he vowed to be focused on ‘beating this cancer.’ And that’s exactly what happened  in the proceeding months. 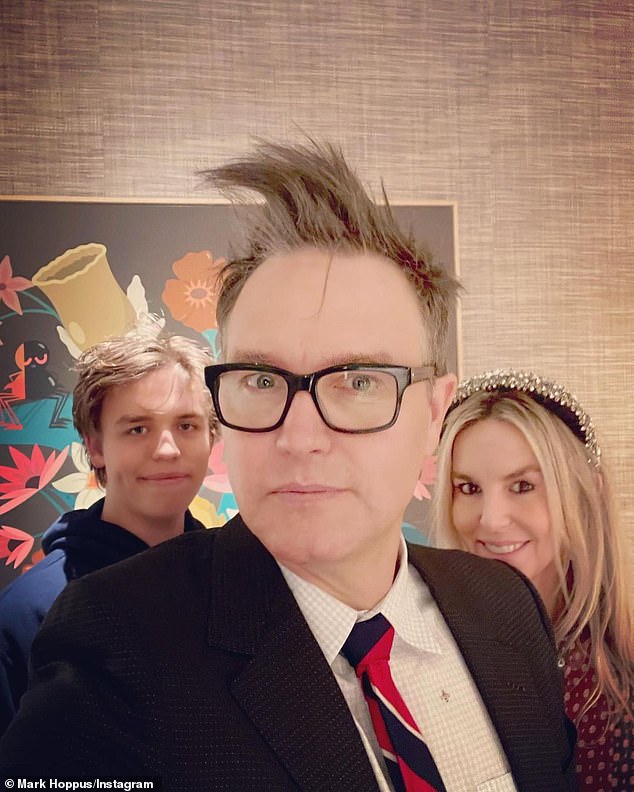 Remission treatment: Hoppus says he has to ‘still get scanned every six month’ as part of his followup treatments; he is pictured with his wife, Skye Everly and son, Jack

By late September, Hoppus shared he was remission.

‘Just saw my oncologist and I’m cancer free!!” he wrote, adding, ‘Thank you God and universe and friends and family and everyone who sent support and kindness and love.’

He continued, ‘Still have to get scanned every six month and it’ll take me until the end of the year to get back to normal but today is an amazing day and I feel so blessed.’

‘Can I get a W in the chat?’ he added, in a reference to the the phrase Twitch streamers use to declare a win. 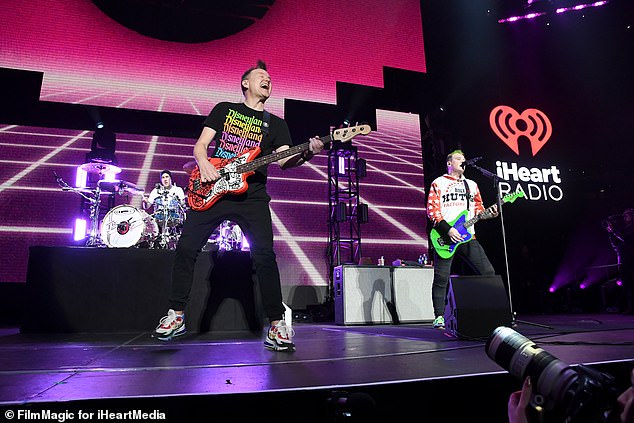 Up to date: Hoppus has been giving periodic updates on his cancer treatments since the summer; he is pictured performing with Blink-182 bandmates Travis Barker and Matt Skiba