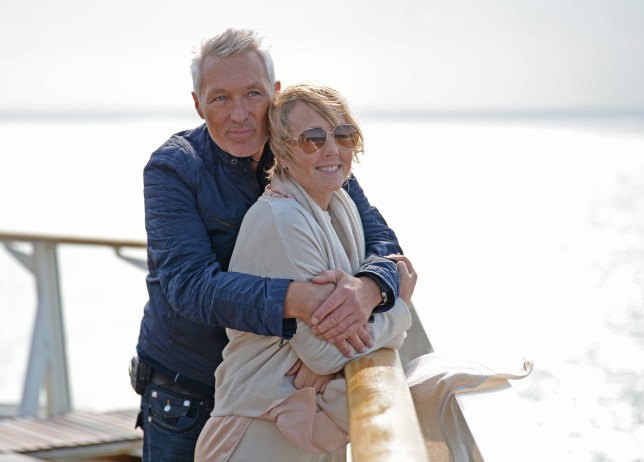 Martin and Shirlie are rediscovering the romance (Picture: P&O Ferries)

Martin Kemp has revealed how the mundane routine of lockdown impacted the romance in his marriage with wife Shirlie but, fortunately, the couple are rediscovering the magic again.

The happy spouses have been married since 1988 but together for a total of 40 years, during which time they’ve become parents to daughter Harley Moon and son Roman Kemp.

Like many couples, Martin and Shirlie, both 59, have struggled with ways to keep their relationship exciting amid all the pandemic restrictions.

However, they’re currently enjoying their first trip abroad to Lille, France, courtesy of P&O Ferries, in order to enjoy some quality time together.

Opening up to Metro.co.uk about their romantic getaway – while sipping rose wine al fresco at a French restaurant nevertheless – Martin explained: ‘What you don’t realise when you come away and you have a break like that, straight away staying in a hotel, a change of life, a change of scenery, people speak in a different language, especially in France, it all becomes romantic.

‘That’s what you realise you miss, because when you’re just getting on with your day-to-day stuff all the time, I’m going to work and it becomes like a routine or something but something like this is a break in routine.

‘That’s why I’ve loved the last couple of days. It’s a break in routine that gives your romantic life a little boost and it’s lovely.’

The couple are currently enjoying a city break in France (Picture: P&O Ferries)

Over the four decades of their relationship, Martin and Shirlie have enjoyed multiple getaways together but the former Spandau Ballet singer admitted it’s hard to pinpoint their most special trip.

‘I have so many memories you know, we’ve been together so long,’ he said. ‘It’s been like nearly 40 years, 35 years married. We’ve been around the world together, but I suppose there’s times where I’ll come down to Australia with Shirlie and we’ve stayed on four islands together.

‘But I’ve changed as I’ve got older, you know, long flights don’t appeal to me that much anymore. I think I’m a much more of a short break person that likes a city holiday, and that’s who I’ve become you know I used to always just dream about going to a beach, driving down to the south of France, but I think over the years, I prefer going to a city, because I don’t sit in the sun as long as I used to.

‘So, I prefer now just a few days in the city that is perfect for me.’

Do you think Martin’s having a good time? (Picture: P&O Ferries)

The holiday has come at the perfect time for Martin as he just attended the Isle of Wight festival to shoot the finale of his upcoming BBC singing competition series, Rock Of All Ages. The reality show will see him team up with rapper and presenter Lady Leshurr to form a new rock group of singers in their 70s, 80s and 90s.

It was a fun yet emotional experience for Martin, as he saw how the elderly contestants had lost hope of ever fulfilling their lifelong dreams of a music career.

‘It was absolutely wonderful,’ Martin recalled. ‘Being down in the Isle of Wight was just superb and being back at a festival just took me back to being in a band. When I saw the stage it just gave me anxiety because I wanted to get up there and play again.

‘It was an incredibly emotional experience because it was that Sliding Doors moment, when they learned how to play instruments when they were kids and had posters on their bedroom walls and they dream of being rockstars. Then all of a sudden, the Sliding Doors moment happens and it takes them on a different path and they lose their dream.

‘What this show does is give it them back and it’s absolutely wonderful.’

Rock Of All Ages is expected to debut on the BBC in the new year but an official airdate is yet to be announced.

P&O Ferries currently offers direct routes to France, Holland, Northern and Republic of Ireland. To book your next holiday adventure, visit their website.