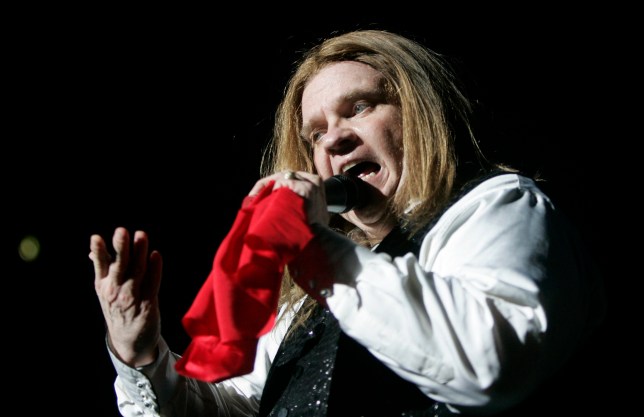 Meat Loaf’s final TV appearance will be a particularly chilling swan song to the small screen as he chases spirits in the haunting Ghost Hunters.

The heroic Bat Out of Hell singer has died, aged 74, his agent Michael Green confirmed today.

While he leaves behind a legacy of wall to wall hits, selling over 100 million albums, Meat Loaf – real name Marvin Lee Aday – proved himself to be just as entertaining on TV as he was on stage.

Next month, the superstar will be appearing in Ghost Hunters after previously filming with The Atlantic Paranormal Society (TAPS) in an episode titled The Haunted House on the Hill, investigating a haunted farmhouse located in Tennessee.

The episode’s official synopsis reads: ‘Rumours of terrifying activity have plagued the property for decades, but the new owners want to reassure the community that their home doesn’t harbour dangerous entities.’

Meat Loaf previously teamed up with the real-life ghostbusters in 2009 for a special episode named after his most infamous banger Bat Out of Hell, investigating a haunted private island in Thousand Islands, New York.

In 2012, the icon opened up about his experiences with the after life, and said he believed ‘there’s something when you die because there are ghosts’.

‘I’ve seen them, I’ve been around them. Some are just energy left behind, and some are intelligent,’ he told Shortlist.

‘I’ve had conversations with them using a K2 meter, which lets them answer “yes” or “no”.’

Countless celebrities have paid tribute to Meat Loaf, with Ben Shephard sharing a remarkable story from his time with the singer, throwing him out of a TV studio because ‘he wouldn’t leave’.

Boy George shared a memory with the star, writing: ‘R.I.P Meatloaf. Love and prayers to all his family and close friends. He once turned me upside down in a Chinese Restaurant in St Johns Wood.’

The legend that is Meat Loaf has died, aged 74 (Picture: Sony Music Archive via Getty Ima)

Stephen Fry added: ‘I hope paradise is as you remember it from the dashboard light, Meat Loaf.

‘Had a fun time performing a sketch with him on Saturday Live way back in the last century.’

A statement posted to Facebook, confirming Meat Loaf’s death read: ‘Our hearts are broken to announce that the incomparable Meat Loaf passed away tonight with his wife Deborah by his side.

‘Daughters Pearl and Amanda and close friends have been with him throughout the last 24 hours.

‘His amazing career spanned 6 decades that saw him sell over 100 Million albums worldwide and star in over 65 movies, including Fight Club, Focus, Rocky Horror Picture Show and Wayne’s World. Bat Out of Hell remains one of the top 10 selling albums of all time.

‘We know how much he meant to so many of you and we truly appreciate all of the love and support as we move through this time of grief in losing such an inspiring artist and beautiful man.

‘We thank you for your understanding of our need for privacy at this time. From his heart to your souls…don’t ever stop rocking!’