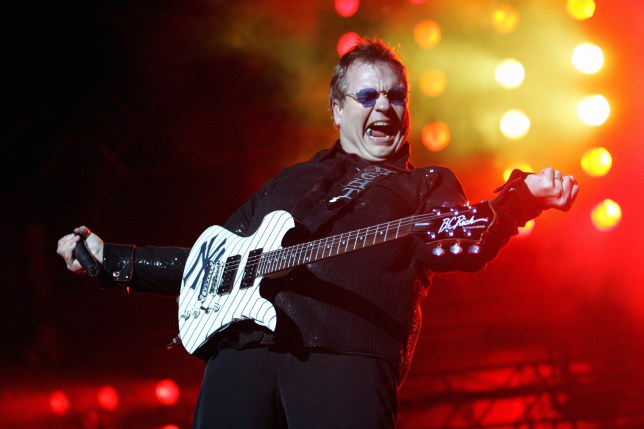 The public knew him best for his hugely-popular songs such as I’d Do Anything For Love (But I Won’t Do That), and his memorable performances in over 50 movies including Fight Club.

But where did the late star’s unusual stage name come from – and what was his real name?

Here’s what we know.

What was Meat Loaf’s real name?

However, this wasn’t the name the singer was born with. He was actually born Marvin Lee Aday.

He legally changed his name to Michael when he was around 37 in 1984 – an experience he detailed on an episode of Piers Morgan Live, on the US news channel CNN.

It’s all related to an old commercial for Levi’s jeans, which had the line: ‘Poor fat Marvin can’t wear Levi’s.’

Meat Loaf was apparently an overweight child, and the advert came out while he was around 5 or 6 years old. And he really couldn’t wear Levi’s – or jeans at all.

The singer told Piers: ‘When I was a kid I was so big – I was really big – that I literally could not wear blue jeans.

‘My mother would take me to Sears, and they didn’t make blue jeans that would fit me. I wore pleated pants in the first grade.’

Suddenly, it was hurtful to be called Marvin – therefore no one would, using the nickname ‘Meat’ instead.

It’s worth noting, though, that Meat Loaf did once say he wasn’t always truthful about his name and age in interviews.

In 2003, he confessed to The Observer: ‘Names and ages p*ss me off, so I just continually lie.’

How did Meat Loaf get his stage name?

As mentioned above, ‘Meat’ started out as a young Michael’s nickname.

It was given to him by his father, according to a 2006 interview he gave to Oprah Winfrey.

His dad joked that Meat Loaf was bright red when he was born, and looked like ‘9 and a half pounds of ground chuck’.

It would be 13 more years before the ‘Loaf’ bit would be added – around the time when The Rocky Horror Picture Show star was a high school football player.

Apparently, after standing on his coach’s foot by mistake, they hollered: ‘Get off my foot, you hunk of meat loaf!’

The rest, as they say, is history.